The Pandemic and the Crisis of Faith 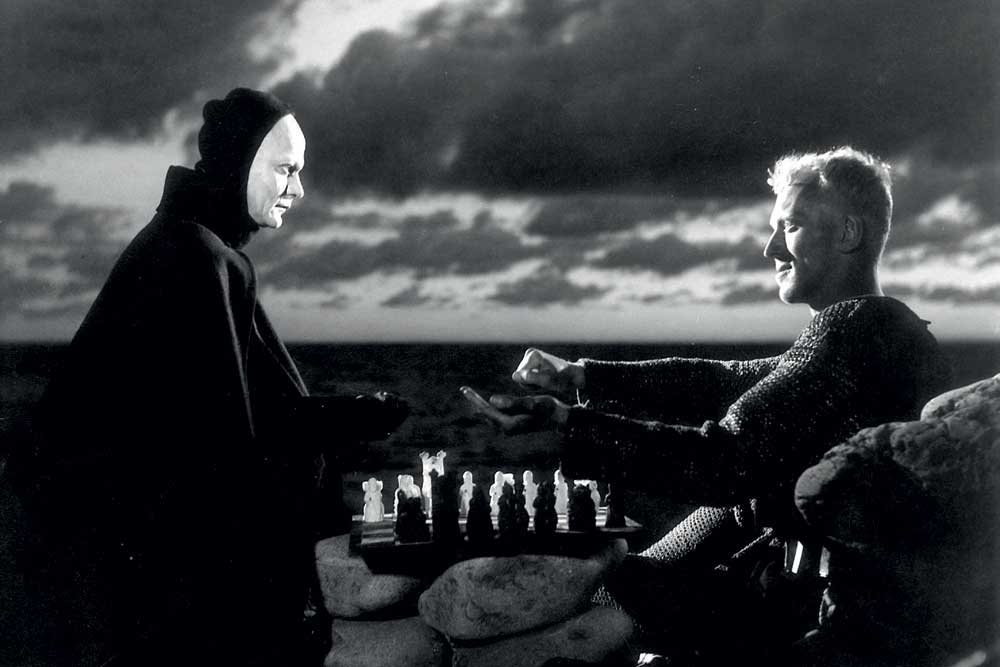 
THE NOVEL CORONAVIRUS mocks, as it were, the very marvels of modernity that we swear by and take for granted. But all the powers of science and technology have not yet been able to overcome its lethal fury. It has already and relentlessly infected over 2 million people around the world, killing more than 125,000.

Instead of modernity flattening the curve of contagion, the tiny spikes of the infinitesimal virus seem to be stamping upon and trampling the very crown of modern civilisation, grinding it into the dust.

Will Covid-19 destroy our faith in modernity as the Black Death, centuries ago, did the faith of the medieval world in religion? Meditating on this matter led me back to one of the most moving and mesmerising movies that I encountered in my formative years.

Ingmar Bergman’s cinematic classic, The Seventh Seal (1957), is actually about a global pandemic. And how it brings about the birth of modernity. Today the relationship between disease and the crisis of faith has become crystal clear
once again.

The main character in the film is Antonius Block, a knight famously played by Max von Sydow. The knight’s homecoming is far from pleasant. He has just returned from the Crusades, still burdened by the terrible trauma of war and destruction. Instead of the welcome comforts of home, all that he sees is more death.

Death, worse and even more terrifying than a decade of fighting unruly infidels. A death caused by an enemy even more deadly. Plague. It is as if the scourge of God has scorched the earth with Black Death.

But the pestilence which serves at the film’s backdrop is no mere metaphor. The Black Death was the most catastrophic and lethal pandemic in human history. In the middle of the 14th century it wiped out, according to some estimates, as many as 200 million people, more than half the population of Europe.

Eerily, the Black Death was also of Eastern origin and zoonotic, possibly originating in China (‘Europe’s Plagues Came from China, Study Finds’, The New York Times, October 31st, 2010). Jumping from rats to fleas, to humans, it traversed the high seas on imperial ships and overland via the silk route. Soon whole continents were infected with death and devastation. Death was so fecund that often it was not even possible to give the dead a decent burial.

When the knight confronts the enormity of all this, he takes refuge in a bare, rustic church whose doors are open. Kneeling down to confess, he breaks down in front of a hooded priest half-seen through the manacled ferrous mesh: “My indifference has shut me out. I live in a world of ghosts, a prisoner of dreams. I want God to put out his hand, show his face, speak to me. I cry out to him in the dark but there is no one there.”

When the priest in the black cowl turns to face us, he is revealed to be Death itself, face painted like a white mask. It is Death who has been following the knight throughout. Faced with Death, the anguished knight wants to find the meaning of life.

But he is met only with a deafening silence.

Because God, as in the Book of Revelation from which the film gets its title, is silent: “And when he had opened the seventh seal, there was silence in heaven… .” Worse, God’s angels, after playing their trumpets, only shower death and destruction on hapless humanity: “The first angel sounded, and there followed hail and fire mingled with blood, and they were cast upon the earth: and the third part of trees was burnt up, and all green grass was burnt up.


Eerily, the Black Death was also of Eastern origin and Zoonotic, possibly originating in China, jumping from rats to fleas, to humans

And I beheld, and heard an angel flying through the midst of heaven, saying with a loud voice, Woe, woe, woe, to the inhabiters of the earth by reason of the other voices of the trumpet of the three angels, which are yet to sound!”

Even in the midst of death and so much suffering, the knight is confronted with more human depravity and cruelty. A woman being burnt as a witch at the behest of unscrupulous church leaders. Rape, flagellation, betrayal, and deception. And brainwashed, superstitious, ordinary people.
The knight feels that if he can do one meaningful act, he might be able to redeem himself. He decides to save the lives of Jof and his wife Mia, an itinerant actor couple, who are also trying to escape death with their baby boy, Mikael.

The knight challenges Death to a game of chess to buy time. “No one escapes me,” Death declares, as the knight desperately tries to outwit him. At last, he loses but manages to make his way back to his castle and waiting wife. But their reunion dinner also turns out to be their last supper. Death is literally at his door.

In the meanwhile, however, the caravan of Jof and Mia is saved. The violent death storm, which engulfs the knight and his castle, has passed them by. The movie ends with a haunting image—a macabre and merry dance of death in silhouette.

With the novel coronavirus raging about us, it seems almost as if one or more of the remaining of God’s angels have also sounded their trumpets, wreaking upon us a disease even more deadly than its predecessors. Has the virus made us doubt science itself?

Confronted with a pandemic of this scale and size, we simply don’t know enough. About so many things. About viruses, for instance. How they cross from animals to humans? How they mutate? How long they last?

We don’t know how individual human bodies react to this particular virus. How much our own immunity might work against it. Whether traditional medical and healing systems, such as Ayurveda and Siddha, can help boost our capacities to resist the virus. Whether yoga and meditation might also contribute to our fighting abilities.

Most of all, we don’t know how long it will take to find a vaccine. We continue to play a game of chess with Death. And at least for now it looks as if we are not winning.

But luckily for us, we still believe in science even though we are conscious of its limitations. Perhaps, a new combination of science for an epidemiological attack and spirituality for inner and conscious resistance to the disease may emerge as an unexpected consequence.

If modern civilisation is to be saved, it might be through a narrow path in the dark forest of the night of the pandemic. One that shuns both the arrogance of science and the superstition of religion.

Certainly, that will be better than spitting on science by taking faith in failed scriptures or dismissing all traditional knowledge merely as old wives’ tales.