The Ocean of Compassion

Shiva can be reached even if one worships without mantras 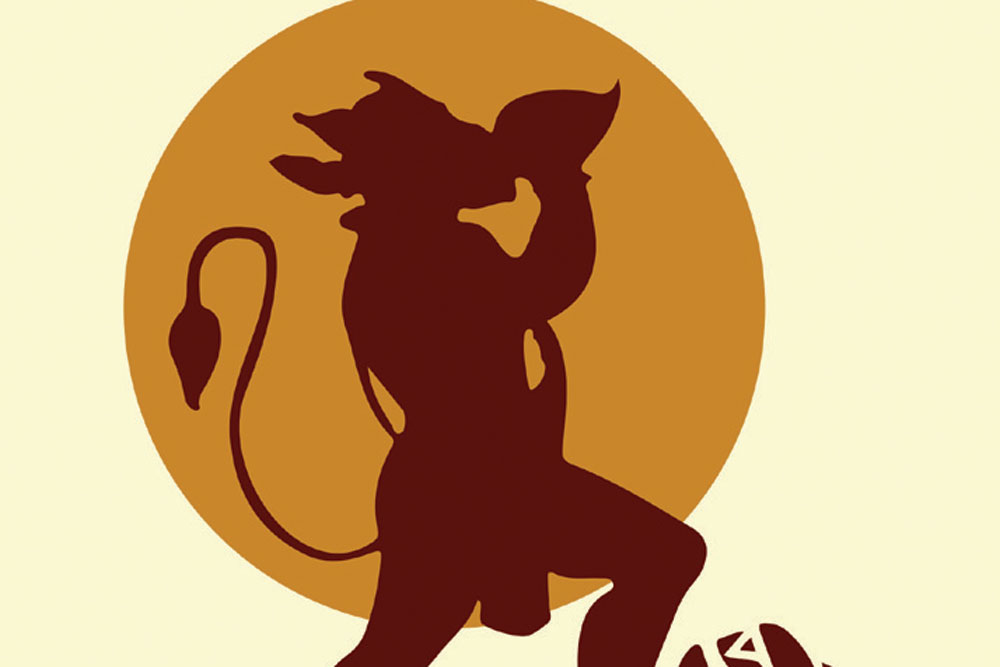 IN THE LAST column, I mentioned that there is more than one story connected with Mahakala. Here is the second one. This story, from the Shiva Purana, also features Hanuman.

Suta said, “There was a great king in Ujjayini, known by the name of Chandrasena. He knew the truth about all the sacred texts. He had conquered his senses and was Shiva’s devotee. The gana Manibhadra was the king’s friend. [A gana is Shiva’s attendant and companion.] He was foremost among Girisha’s ganas and was revered by all the worlds. On one occasion, Manibhadra was pleased with him and gave him the great jewel Chintamani. This jewel was as radiant as Koustubha and its resplendence was like that of the sun. If one meditated on it, saw it or heard about it, it was certain to bring auspiciousness. If brass, copper, tin, stone or other objects touched its shining surface, they immediately turned into gold. With Shiva as his refuge and the dazzling Chintamani around his neck, King Chandrasena was as resplendent as Bhanumat [Surya] amidst devas. Hearing that Chandrasena, supreme among kings, had Chintamani around his neck, the hearts of all the kings on earth were agitated because of their greed. All the kings were jealous of Chandrasena and his jewel, obtained through a divine source. They used their intelligence to devise many means to get it from him. All the kings asked Chandrasena for it. However, firm in his devotion to Mahakala, he repulsed the kings. The kings from all those countries became angry and assembled the four kinds of forces [horses, elephants, chariots and infantry]. They made attempts to defeat Chandrasena in a battle. With many soldiers, they laid siege to Ujjayini’s four gates. The king saw that all the kings had laid siege to his own city. He went and sought refuge with Mahakaleshvara. The king didn’t eat. He was firm in his determination that there was no other option. Single-mindedly, he worshipped Mahakala day and night. Bhagavan Mahakala Shambhu was pleased and devised a means to protect him. Listen.”


Hanuman said, ‘O fortunate kings and all those who have bodies! Listen. For those with bodies, there is no destination other than Shiva’

“At that time, there was a gopi in that excellent city. Taking her child with her, she roamed around and approached Mahakala. With her husband dead, she was carrying the child, who was five years old. Full of love, she saw the worship the king did of Mahakala. She witnessed that extremely great and wonderful worship done of Shiva. Prostrating herself, she returned to her own tent. The ballavi’s [ballavi means gopi, cowherdess] son witnessed everything, full of curiosity. He made up his mind to worship Shiva too. He brought a stone and placed it in a vacant spot near the tent. It was not far from his own tent and devotedly, he regarded this as his own Shiva lingam. He thought of artificial fragrances, ornaments, garments, incense, lamps, akshata (unhusked grain) and naivedya. He repeatedly performed the worship with beautiful flowers and leaves. He danced in different kinds of ways and repeatedly prostrated himself. At such a time, when the son’s mind was fixed on Shiva, the gopi lovingly called him to have his food. Though the child was called many times, his mind was fixed on worshipping Shiva. He did not wish to eat. She went there and saw him seated in front of Shiva, with his eyes closed. She struck him angrily and dragged him by the hand. Though he was struck and dragged, the child did not leave. Therefore, she destroyed the worship and flung the lingam far away. When she did this, her son lamented and reprimanded her. Full of rage, the gopi entered her own house again. Seeing that his mother had destroyed the worship of the divinity who wields the trident, the child fell down on the ground and lamented, “O lord! O divinity!” Overcome by grief, he lost his senses. He regained his senses after a while and opened his eyes. The child saw that, as a result of Shiva’s favours, the tent was transformed into Mahakala’s beautiful temple. There were large doors made out of gold. There were broad and excellent gates. There was an extremely expensive and radiant altar, made out of sparkling blue diamonds. There were many wonderful pots, made out of molten gold. There were shining pillars, encrusted with gems. The floor was made out of slabs of crystal. Right in the middle, there was a bejewelled lingam of Shankara, the ocean of compassion. The gopi’s son saw that the objects he had used for the worship were also there. Seeing this, the child’s mind was amazed and he instantly stood up. It was as if he was immersed in an ocean of supreme bliss. He repeatedly praised Girisha and prostrated himself before him. When the sun set, the child emerged from Shiva’s temple. He saw that his own tent had come to resemble Purandara’s city. It had suddenly been converted into one that was made out of gold. It was wonderful and immensely radiant. He entered his house, which was filled with everything that was beautiful. It was strewn with large numbers of jewels and gold. He rejoiced. Night was about to start. He saw his mother there, resembling a celestial woman, with all the divine signs. Her limbs were radiant, decorated with bejewelled ornaments. She seemed to be a celestial lady. The son, the recipient of Shiva’s favours, was full of joy and quickly woke his mother up. Waking up, she saw these wonders, the likes of which had not been seen before. Immersed in great joy, she embraced her son.”

“She heard everything from her son’s mouth, to the effect that all this was because of the favours of Girija’s husband. She sent word to the king, who was constantly worshipping Shiva. After completing the rituals of the night, the king quickly arrived there. He saw the powers of the gopi’s son, consequent to satisfying Shiva. The lord of the earth and all the advisors and the purohita saw this. They were immersed in an ocean of supreme bliss. King Chandrasena’s eyes shed tears of love. Rejoicing, he chanted Shiva’s names and embraced the child. There were great and wonderful festivities. All of them were overwhelmed with joy and chanted about Mahesha. Witnessing Shiva’s greatness and this wonderful incident, the citizens were filled with respect and the night passed, as if it were only an instant. In the morning, the kings who had laid siege to the city, so as to fight, heard through their spies what had happened. All those kings assembled and gathered together. Scared at what they had heard, they spoke to each other. The kings said, “This king, Chandrasena, is Shiva’s devotee and is impossible to defeat. The lord Mahakala is favourably disposed towards the city of Ujjayini. He is Shiva’s devotee and even the children of the city follow Shiva’s vratas. King Chandrasena is Shankara’s great devotee. It is clear that if we oppose him, Shiva will be angry. His rage will bring destruction to all of us. Therefore, we must have an alliance with the king. If we do this, Mahesha will show us his compassion.” Having decided this, the kings gave up their wicked enmity. Delighted, all of them cast aside the astras and shastras in their hands. Taking King Chandrasena’s permission, they entered the beautiful city, protected by Mahakala. They happily worshipped Mahakala. The kings also went to the gopi’s house. All of them praised the advent of her divine good fortune. Chandrasena welcomed them and honoured them. He was seated on an expensive seat and amazed, they honoured him back. They saw the Shiva lingam and Shiva’s temple, which had manifested because of the favours of the gopi’s son. Their minds turned completely towards Shiva. All the kings were delighted with the gopi’s son. Desiring Shiva’s compassion, they gave him many objects.”

“At this time, worshipped by all the residents of heaven, the energetic Hanuman, the lord of vanaras, manifested himself there. At his arrival, the kings were filled with reverence. They stood up and bent down, images of humility and devotion. Worshipped, the lord of monkeys sat down in their midst. He embraced the gopi’s son. He glanced towards the kings and spoke. Hanuman said, “O fortunate kings and all those who have bodies! Listen. For those with bodies, there is no destination other than Shiva. It is good fortune that the gopi’s son witnessed Shiva’s worship. Even if one worships Shiva without mantras, Shiva can be reached. He is supreme among Shambhu’s devotees and has enhanced the fame of the lineage of gopas. He will enjoy all the objects of pleasure in this world. After the period of enjoyment is over, he will obtain emancipation. In the eighth generation of his lineage, there will be an immensely illustrious one named Nanda. As his son, he will obtain Krishna, who will be Narayana himself. From now on, this son of a gopa will be famous in the worlds and will be addressed by the name of Shrikara.” Saying this, he cast a glance of compassion towards Chandrasena and all the kings. Cheerfully, he instructed Shrikara, the gopi’s intelligent son, loved by Shiva, in methods of worshipping Shiva. The great king, Chandrasena, and Shrikara, the son of a gopa, were both filled with great joy and served Mahakala.