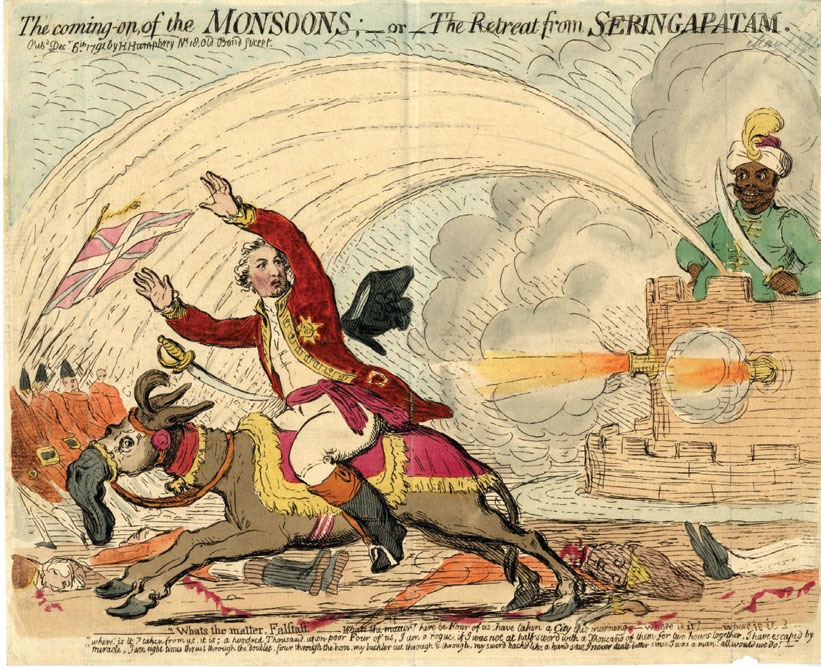 
THERE ARE SOME figures that seem to walk continually in the shadows, startling us when they step into the dappled light for a half-glimpsed vision, as they are illuminated in the glow of new findings. Tipu Sultan, the 18th-century ruler of Mysore, is one such figure. The Sultan’s legacy has long been articulated to the cadence of immoderate colonial rage and greed, because Tipu Sultan and his father Haidar Ali posed the most ferociously relentless challenge to English expansion in the subcontinent in the 18th century. The English engaged with Tipu through four Anglo-Mysore wars, finally killing him at Seringapatam in 1799. As a result, popular imaginings have focused on Tipu as the warrior, with furious colonial recordings further casting him as a bloodthirsty despot, practically a monster.

But as the current DAG exhibition on him, Tipu Sultan: Image & Distance, running at The Claridges, New Delhi, shows, there were countless facets to this enigmatic ruler and his short but intensely lived life, and he has many incarnations. Euro­pean satirists, for example, were more sympathetic to local leaders and particularly scathing about the corrupt and venal underbelly of the East India Company in its dealings with Mysore. Haidar Ali Spanks the English by French artist Antoine Borel acknowledges the success of the Mysore leaders against the British during the first two Anglo-Mysore wars while The Coming-on of the Monsoons by English satirist James Gillray shows Cornwallis in an undignified scamper, galloping away from the walls of Seringapatam, defended by Tipu, who is blast­ing him with a jet of what can only be assumed to be urine!

Because the focus of colonial representation was so over­whelmingly on Tipu in battle, and then Tipu in death, it is easy to overlook a crucial aspect of Tipu’s rule, which was that he was keen to transform Mysore into an economically vibrant country. Scholar Kaveh Yazdani has shown that “the life-threatening confrontation with the British” provoked seismic changes in Mysore in the realms of “agriculture, commerce, manufacture and technology” etc. To achieve these aims, Tipu remained tire­lessly focused on maintaining commercial contacts with distant nations. He sent agents to Burma to promote trade and to buy rubies, exported teakwood, sandalwood, textiles, silk, pepper rice, cardamom and ivory to Persia and Oman, and maintained contact with China. “The Christian nations who have dominated the world today have been able to do so only because of their mas­tery over trade and industry,” Tipu noted, determined to do the same. To this end he sent ambassadors to the King of Persia, carry­ing elephants, spices, ivory, clothes, and jewels, and instructed his envoys to bring back goods from that country.

And since France was the ancient enemy of England, and an ally, though often vacillating, of Mysore, Tipu sought the help of France, both for military and commercial purposes. In 1786 Tipu sent an embassy to Paris, to the court of beleaguered King Louis XVI, asking for soldiers to fight against the English, but also specifically asking for crafts persons to be sent back to Mysore, for the manufacture of muskets and cannon-pieces, and also clockmakers, producers of Sevre porcelain, makers of glass and mirrors, astronomers, physicians, wool-carders, textile-makers, weavers, printers, and physicians, 10 persons representing each guild. By the early 1790s, at least 30 French experts from different professions were living in Mysore, “with a view to instruct Tippoo’s subjects in manufactures and aiding this Asiatic ally of France with mechanical knowledge.” Tipu’s aim was not simply to collect precious goods from around the world but to transfer knowledge so that Mysoreans could master these goods and techniques for themselves.

Tipu also asked for flowering shrubs for his gardens, and orchard trees for his table but also “useful” plants such as hemp and flex, and spice plants, which could be commercially exploited. The request for spices namely nutmeg, cinnamon and cloves, caused a fair bit of angst among the French, who had only very recently started growing these precious plants them­selves. But in the end the Sultan’s request was accepted, and plants were sent along with two French gardeners to ensure the survival of this delicate cargo.


Tipu’s embassy to France caused an effervescence of excite­ment in Parisian circles, and resulted in a deluge of representa­tions of the Sultan and his men, from paintings on porcelain to oil paintings, etchings and engravings. Unlike the leering, snarling figure of British imagination, these paintings depicted powerful, dignified rulers. Exotic certainly, and sometimes blithely interchangeable with Turkish monarchs, but nonethe­less on an equal pedestal with French potentates. Perhaps one of the most haunting images of Tipu’s court was a painting ex­ecuted by a French woman artist, of one of the Sultan’s ambassa­dors to Versailles. Elisabeth Vigée-Lebrun was an extraordinary woman herself, the official painter of Queen Marie Antoinette and one of the very rare female members of the Royal academy. “I saw them at the Opera,” she wrote in a letter about Tipu’s three ambassadors, “and found them so extraordinarily picturesque that I had to paint them.” But the ambassadors, shocked at being approached by a woman artist, insisted that the request come from the King of France himself, which she was able to obtain. She visited the ambassadors at the hotel they were staying at and after being momentarily taken aback by the rose water thrown at her hands, Elisabeth then went into the apartments where the ambassador Mohammed Darwesh Khan immediately struck a pose with such easy grace and elegance that Elisabeth painted him in that very stance—tall and imposing with his hand on the hilt of his gorgeously jewelled sword, his rich white muslin robes sprinkled with golden flowers, and the bronze-gold of his cummerbund gleaming dully in the saturated light. This por­trait of the Mysorean ambassador, emanating virile power and exotic otherness, is unique amongst Vigée-Lebrun’s works, as she tended to paint quintessentially European, elegant courtiers. It is unique, also, in showing this representative of Tipu’s court in all his human vulnerability. There is confidence and power, certainly, but there is also a self-conscious vanity and even a glimmer of bright curiosity and fleeting humour.

The coming-on of the monsoons by English satirist James Gillray shows Cornwallis in an undignified scamper, galloping away from the walls of Seringapatam, defended by Tipu, who is blasting Cornwallis with a jet of what can only be assumed to be urine

Unfortunately for the ambassadors, and for Tipu Sultan, the timing of the embassy was tragically wrong. Not only was the French king Louis XVI soon to be parted from his royal head during the French Revolution, but the very robes that Darwesh Khan and his companions were wearing—the gauzy, fine muslin and glittering jewels and embroidery, were all signs of an abhorred extravagance that the people of Paris would no longer tolerate. As for the precious spice plants, much like the French craftspeople sent from France, they too languished in the humid glare of Mysore’s sun.

In all this imagining of Tipu Sultan, it is fascinating to won­der how he would have liked to be remembered. The Sultan, after all, was no novice to the art of symbolism and augury. Unlike his illiterate, soldier father Haidar Ali, Tipu was born a prince, educated in the textured nuances of the layered world he inhabited. His war banner had a stylised calligraphic tiger mask that read—Assad Allah ul-Ghalib—the Victorious Lion of God. The title Lion of God was given by Prophet Muhammad to his son-in-law Ali, in honour of the great valour with which Ali had fought for the Prophet and Tipu Sultan chose to glorify Hazrat Ali by adopting for himself and his country the symbol of the tiger, or lion, the two being interchangeable in India. The tiger stripe, or baburi symbol, was used to overwhelming effect at his court. It flickered like fire on the inside of his tents, and on his soldiers’ uniform. His glittering throne consisted of a life-sized tiger, covered in gold, holding up the body of the throne on its back. Tiger heads of gold decorated the throne and in the courtyard of Tipu’s palace, live tigers prowled.

In the end, Tipu’s throne was dismembered and his tigers were shot. And yet the light remains, even if it is just a smoul­der, like that of a tiger’s, to shine our way to a greater under­standing of our chaotic history.