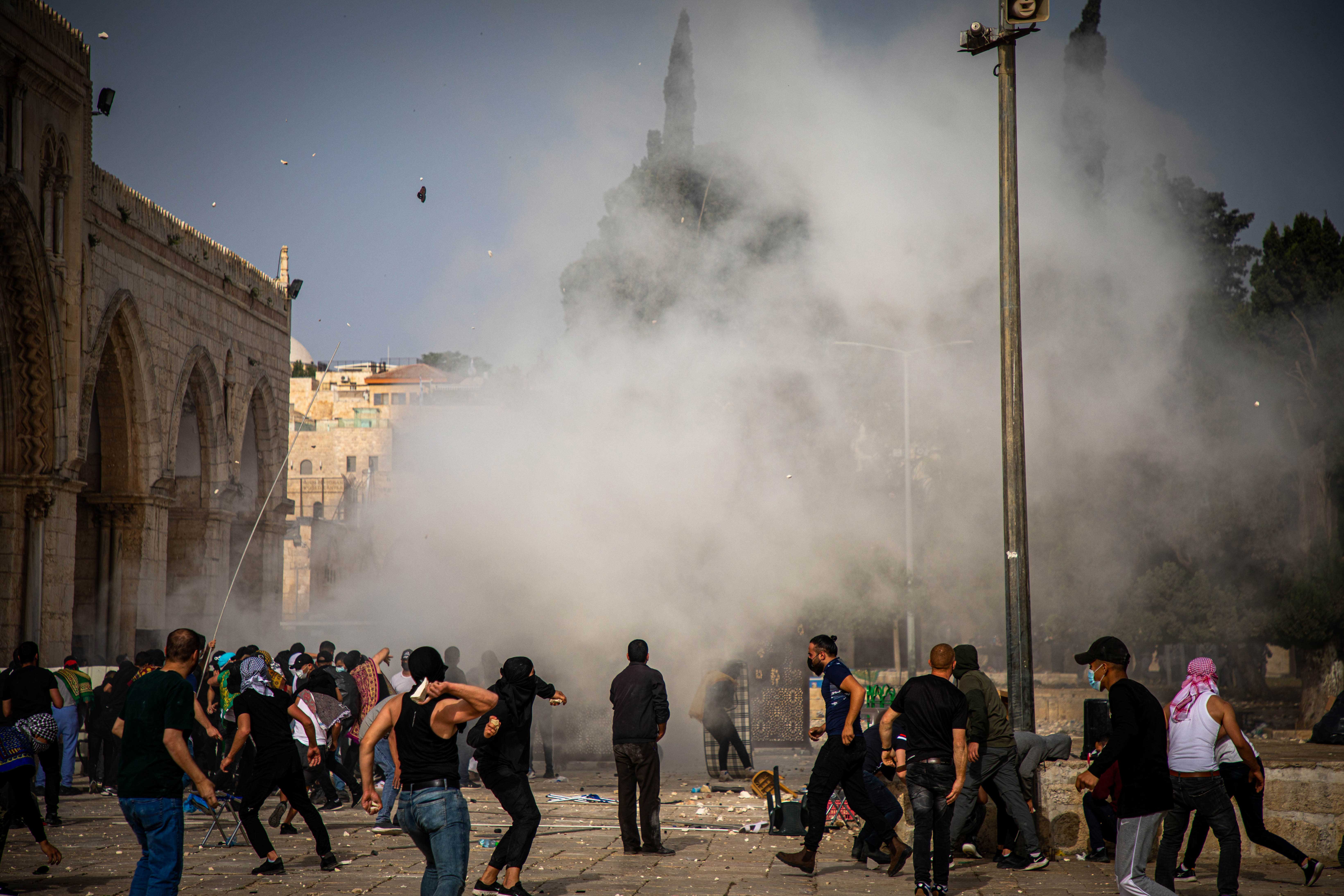 
Soumya Santosh, a 30-year-old nurse-cum-caregiver from Idukki in Kerala, has brought the Hamas-Israel conflict closer to our living rooms last week. Santosh was working as a caregiver to 80-year-old Nella Gurevitz and her husband in Ashkelon, a Jerusalem suburb. She was killed along with Gurevitz when a rocket fired by the Hamas terror group in the Gaza Strip escaped Israel’s Iron Dome and landed on their apartment. Israel was quick to mourn her death and the Israeli ambassador to Delhi, Ron Malka, tweeted : ‘The whole country is mourning her loss and we are here for them.’

The sacred month of Ramadan, during which devout Muslims were expected to shun all forms of violence, has become one of the worst months of violence in Israel. The ongoing conflict is centred around the Al Aqsa mosque in East Jerusalem, considered the third holiest place for Muslims after Mecca and Medina. Sheikh Jarrah, another Jerusalem neighbourhood, has also emerged as an epicentre of the clashes.

Conflict is not new to West Asia. There is a tendency to wrongly portray it as Palestine-Israel conflict, which it is not. This is a conflict between the Hamas terror group and the Israeli defence forces, the IDF. The Palestinian National Authority, based out of the Ramallah town in the West Bank and headed by President Mahmoud Abbas, is the UN-recognised political government of more than 4 million Palestinians living in both West Bank and Gaza Strip. The government of Israel tries to maintain cordial relations with its counterpart in Ramallah. But over the decades, it has faced a challenge from two Palestinian terror groups—the Hamas based out of the Gaza Strip, and the Hezbollah, a militant group based in East Lebanon across the Israeli border.

In the recent clashes, the Israeli side suffered relatively lower number of casualties against the Palestinians in the Gaza Strip. But it will be wrong to conclude that Israel has used ‘disproportionate’ force based on the difference in the number of casualties. Many countries commit that mistake, and India too was no exception in the past. Less casualties on Israeli side do not indicate less aggression from the Hamas side. In fact, Hamas has got a massive stockpile of rockets of various ranges, which it is using profligately against the civilian targets in Israel. One such rocket has killed Santosh, and another has killed two Israeli-Palestinians.

But what prevents Hamas from killing more people is the IDF’s Iron Dome anti-missile technology, that has the capacity to neutralise over 90 per cent of the rockets fired by Hamas mid-air. For every single rocket of Hamas that killed a Santosh, there were nine others which were neutralised mid-air by the IDF. It is easy to imagine the extent of mayhem that Hamas could have caused had the Iron Dome not been there. What worries the IDF is the ability of Hamas to procure and fire a large number of rockets in quick succession thus reducing Iron Dome’s efficacy to intercept, and cause major damage to Israeli cities. Hezbollah, which has tacit Iranian support, is maintaining a low profile at the moment, but it has a bigger stockpile of rockets with superior range capabilities.

It is in this backdrop that one should appreciate President Joe Biden’s statement that “Israel has a right to defend itself.” India’s representative to the UN, TS Tirumurti, conveyed India’s concern over the escalating violence in East Jerusalem and related events. He also condemned rocket attacks from Gaza.

Sadly, the West Asian conflict has always been seen by many from coloured prisms. The broad narrative has all along been on the lines that Israel was the aggressor and Palestinians, the victims. Any human suffering is highly deplorable. But it will be a huge mistake to equate the rogue actions of a militant group like Hamas with responsible actions for self-defence by the Israeli defence forces. As long as we refuse to decry Hamas’ actions as terrorist actions, peace in West Asia will remain a chimera.

Gaza Strip is a part of the Palestinian National Authority (PNA) headed by Abbas. But the Hamas leadership in Gaza Strip is in the hands of militant commanders like Khaled Mashal until he was killed recently by the IDF and Ismail Haniyeh, who replaced him. These leaders refuse to recognise the elected civilian leadership of the PNA led by Abbas. In fact, the Hamas has been a terror not only to Israel, but also to various other Palestinian groups in Gaza Strip, including the Fatah party of Abbas. The Hamas militants killed many leaders of rival parties in order to tighten their grip over the Gaza territory.

Hamas’ singular objective is to capture Jerusalem. It leaves no opportunity to exploit the situation and indulge in firing rockets against random civilian targets in the Jewish neighbourhoods. The opportunity came this time in the form of heightened security of the Al Aqsa mosque compound by the Israeli forces after violent clashes broke out between the Jews and Palestinian Arabs in the East Jerusalem neighbourhood of Sheik Jarrah. What many commentators, including the Indian representative to the UN, described as the root cause of the current conflict—the “evictions in Sheikh Jarrah and Silwan neighbourhoods”—is actually about some pending court cases over land disputes between the Jews and Palestinians in those areas. There have been a large number of claims and counterclaims between both sides over real estate in these downtown areas. As someone who has lived in Hyderabad, I can very well imagine the nature of such disputes, which can be witnessed in the Old City routinely. Every time such a real estate dispute arises, it is interpreted as Israel’s attempt to remove Arabs from East Jerusalem and passions are incited. Repeated assertions by the Israeli government that it did not intend to change the status quo are ignored or dismissed.

For Hamas, ‘intended eviction of Palestinian citizens’ came as an excuse to incite violence this time. Al Aqsa has been converted into the epicentre of the struggle. The result was another round of violent skirmishes between the Jews and Palestinians on the streets of East Jerusalem, and between Hamas and the IDF mid-air.

Al Aqsa—meaning the ‘farthest’ mosque—stands on a 35-acre land, which is sacred for all three religious communities—the Jews, Muslims and Christians. The Muslims believe that Prophet Muhammad had ascended the winged horse to heaven from this place, which they call as Haram esh-Sharif. The Jews call it Har Habayit or Temple Mount. It is the most sacred place for them because of the two ancient temple of the Jews—the first of which was built by King Solomon and destroyed by the Babylonians, and the second, which stood for 600 years before being destroyed during the Roman Empire. For the Christians, Jerusalem is sacred due to its association with Jesus Christ, who is known to have preached, die and resurrected here.

The majority world powers, including India, want a ‘two-state solution’ to be implemented to resolve the conflict between the Israelis and Palestinians. In 1993, as part of the Oslo Accords, the two sides had agreed to work towards this solution, which would have led to the creation of an independent Palestinian state alongside the state of Israel with 1967 borders as the defining line between the two entities. It was after the Oslo Accords that the PNA was created as the political unit for the 4 million Palestinians.

However, militant outfits like Hamas refuse to accept the 1967 border and insist that Jerusalem should be the capital of the new state. Some liberals who support Hamas cite the Israeli occupation of Jerusalem in the Six Day War of 1967 as unjust. But they hide the fact that there was no Palestinian territory before 1967, and East Jerusalem and Gaza Strip were under the control of Jordan between 1948 and 1967. Jerusalem was unified in the 1967 War and came under Israeli control, which immediately moved its capital and Knesset there.

Dividing Jerusalem between Palestine and Israel will be like the partition of Berlin city after the Second World War. The wall would crumble one day, before causing unmitigated disaster to ordinary people. The best solution for the West Asia conflict that the world should pursue would be to support the two-state formula and maintain a status quo on East Jerusalem. After all, just as it is sacred to the Muslims, it is equally sacred to the Jews who sang for millennia, ‘If I forget you O Jerusalem! let my right hand forget it’s cunning’, and believed in the prophecy of Jeremiah that ‘Again will be heard in the cities of Judah and the crossroads of Jerusalem, the voice of joy, the voice of happiness, the voice of the groom and the voice of the bride.’