The aesthetics of Indian politics—XI 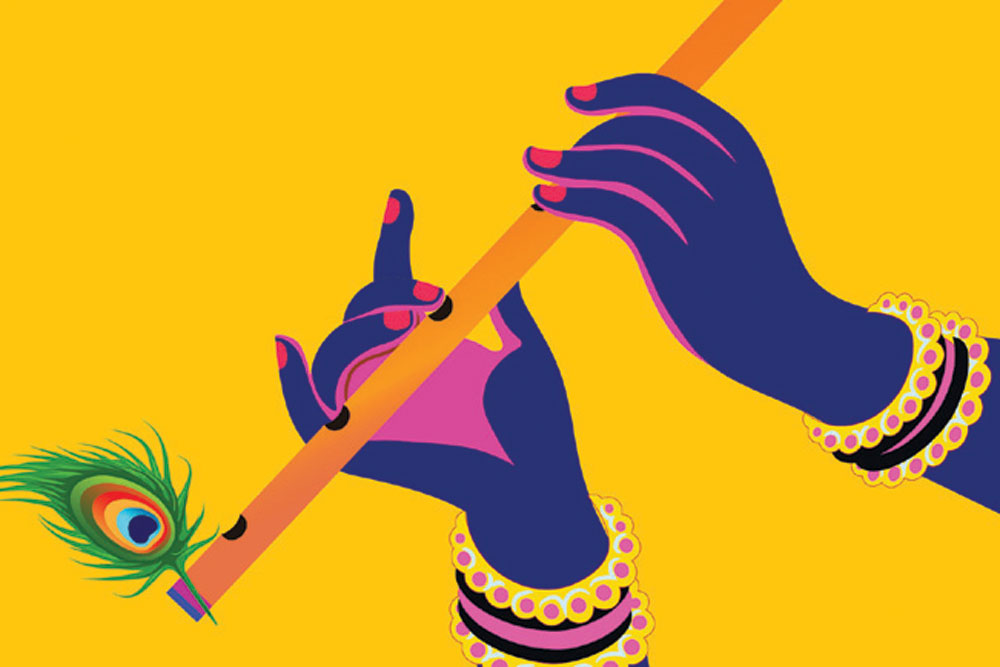 ONE OF THE key sources for the application of the rasa-dhvani aesthetics to spiritual seeking is Srila Rupa Goswami’s Sri Bhaktirasamritasindhu (c 1541), or the ocean of nectar of the bhakti rasa. One of the six original Goswamis and direct disciples of Sri Chaitanya Mahaprabhu, who settled in Vrindavan, Rupa was born in 1470. His family originally came from Karnataka. His elder brother was Sanatana Goswami, whom he often acknowledged as his preceptor. His younger brother’s son was Jiva Goswami, who also wrote commentaries, in addition to original compositions. Thus, three Goswamis from the same family became central to the development of Gaudiya Vaishnavism in Vrindavan.

What makes their story all the more dramatic is that Sanatana and Rupa were formerly in the service of Nawab Ala-ud-din Husain Shah (1494–1519) of Murshidabad. Some say they were converted to Islam already. On his way to Vrindavan, Chaitanya met them in Ramakeli in 1514. This encounter changed their lives completely. Rupa’s reasons are revealed in purported letters he sent to his brother, Sanatana, urging him to join Chaitanya’s movement:

Where, alas, is Ayodhya, the kingdom of Rama now? Its
glories have disappeared. And where is the famous Mathura
of Krishna? It also is devoid of its former splendour.
Think of the fleeting nature of things and settle your course.

Both brothers left the Nawab’s court and dedicated their lives to Vaishnavism. It was Chaitanya who gave them new names, sent them to Vrindavan to revive Krishna worship, rediscover the forgotten sites associated with Krishna, and to re-establish Krishna bhakti on a solid theological and practical foundation.

The Bhaktirasamritasindhu is a substantial text consisting of twenty-three chapters. (It was translated into English in 2003 by David L Haberman, then at Indiana University, Bloomington, and published by the Indira Gandhi Centre for the Arts.) Along with Ujjvalanilamani and Natakachandrika, it provides the theological and analytical underpinnings of the shastra of bhakti rasa, a coherent doctrine of the relish and realisation through fervent Krishna bhakti. Krishna is the principal deity and the primary text is Srimad Bhagavatam or the Bhagavat Purana. So powerful and popular is this tradition that it continues to flourish to this day.

The Bhagavat Purnana is so important because of its advocacy of an emotional, personal, intimate relationship with Krishna as the Supreme Deity. This was considered far more efficacious than the arid and parched intellectual logic-chopping or scholasticism of later Vedanta. Only an intense and deeply felt involvement with the Divine Purushottama or Godhead could transform the devotee’s life. Thus, sacred sensibility became central to the religious experience. Rasa aesthetics began to permeate devotional practice throughout the country.

Once the Krishna arts were established as a legitimate path to spiritual progress and perfection, Krishna became the centre of devotional stories, plays, poetry, songs, dance, painting, cuisine, couture, and a variety of other arts and crafts. That is how Krishna-leela, Rama-leela, Kathak, and other art forms developed, all of which centred on the worship of the Ishta, or the favoured deity of a community. In recent times, the International Society of Krishna Consciousness (ISKCON) has engendered its own unique style of painting, architecture and worldwide lacto-vegetarian gastronomy.

What is more, it was the savouring of the essence of devotional mysticism which could lead devotees to God, thus making ordinary lives blessed and full of joy. Or in a word, Krishna-maya. Abhinavagupta had already extended the scope of aesthetic experience to the highest ecstasy of spiritual bliss, Brahmananda-sahodara, as he termed it. Similarly, for Rupa Goswami, pure devotion or Bhakti became alaukik, extra-mundane and super-sensual. After all, the love of God is not carnal or profane; it is truly extraordinary and remarkable. Born of pure sattva or our original unblemished nature, it is unselfish and pure amour.

No wonder Rupa Goswami transformed sringara into the love of God, rather than fellow humans, into the basis of all the other rasas. He called it rati, however, more feminine in flavour—because all devotees were in the feminine subject position vis-à-vis Krishna. Spiritual practice, or sadhana, was the cultivation of this pradhana or principal rasa, according to one’s aptitude, fitness, or stage of development.

Rupa Goswami, too, gives primacy to rati, the intense and passionate love for Krishna. He divides the bhavas, determinant or stable states which lead to bhakti, into two categories, primary and secondary. In verse 115, he identifies the primary five, which he terms the maha or great bhavas of bhakti: shanta (serenity), dasya (servitude), sakhya (friendship), vatsalya (parental love) and madhurya (conjugal bliss). Earlier, in verse 40, he lists the seven secondary devotional states: hasa (humour), vismaya (wonderment), utsaha (enthusiasm), shoka (bereavement), krodha (rage), bhaya (fear), jugupsa (revulsion), all of them found in Bharata’s Natyasastra.

At the beginning of this series, I wondered if the principal rasa, or relish in today’s India, is politics. Not just electoral or party politics, not just politics as the quest for power.

Politics as manipulation and manoeuvring, politics as opportunism or betrayal.

Mahendranath Gupta, better known as Sri Ramakrishna’s biographer “M”, once thought that thinking too much of God would make a person deranged. Sri Ramakrishna, reading his mind, immediately countered, “How can one become unconscious by thinking of Consciousness?” (bit.ly/3pYR0yo.) The context is pertinent because Sri Ramakrishna is teaching his householder audience what true bhakti is.

Or as his foremost disciple, Swami Vivekananda, whose 158th anniversary will be celebrated on January 12th as India’s National Youth Day, put it: “We want to become harmonious beings with the psychical, spiritual, intellectual and working [active] sides of our nature equally developed. Nations and individuals typify one of these sides or types and cannot understand more than that one.” (swamivivekananda. guru/2020/05/11/lessons-on-bhakti-yoga-2/).

Today, devotion to the motherland, deshbhakti, has degenerated into political brinkmanship. We will have to decouple politics from patriotism, development and nation-building. That would be a cherished desideratum of India@75.

As to politics, it will continue as it must.

We will have to play along without letting it play us. We must enjoy and relish it as we would a grand theatrical performance without identifying too closely with any particular character or role.