The Genius of Word Games 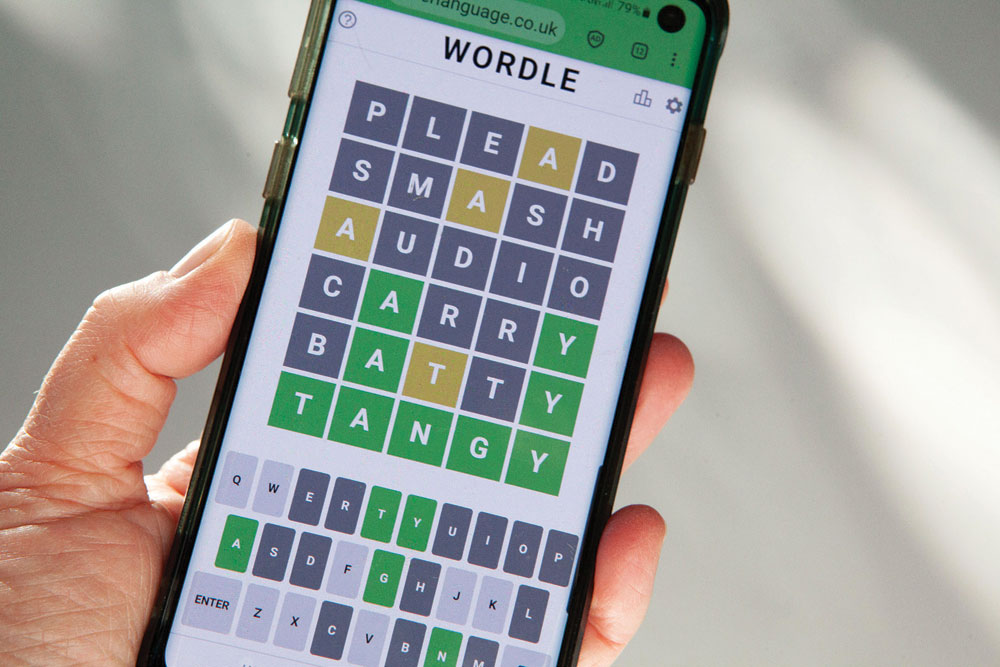 A game of Wordle being played on a mobile phone (Photo: Alamy)

To the uninitiated, Wordle is a word puzzle where a single five letter word is revealed at midnight. The player gets six chances to decipher the word. The only clues provided are a green tile identifying right alphabet, right place, and a yellow tile for right alphabet, wrong place. The rules probably sound more complicated than the game itself. But think of it as a Mastermind with words.

One could guess the game’s popularity given how its signature green and yellow grid was popping up on Twitter, Facebook, WhatsApp, etcetera. But as of February 1st, the game has been bought by The New York Times (NYT) from its creator Josh Wardle, a software engineer in Brooklyn “for an undisclosed seven-figure sum”. The NYT purchase just proves what Wordle users have known all along—the game is an addiction.

Wordle released in October 2021 and in three months has millions of daily users across the globe. Josh Wardle’s Twitter feed proves handy in documenting the game’s popularity. Trevor Noah is a fan. Someone has made a Wordle sequencer that turns your results into music, The New Yorker has featured it in its cartoons and certain (competitive) fathers have been keeping a daily tally of the score of each family member. Even Amul Butter’s latest ad is inspired by Wordle.

On February 1st, Josh Wardle posted a note on his Twitter handle that he was grateful for the Wordle stories that people shared with him of “uniting distant family members, to provoking friendly rivalries, to supporting medical recoveries.” Wardle created the game for his partner Palak Shah, a word-game aficionado, during the pandemic.

Like many other Wordle players (including me), Shah was an NYT Spelling Bee addict first. Seeing her interest in the Bee, reported the NYT, Wardle decided to create a game just for her. Every day, the subscription-only Spelling Bee releases seven new alphabets, and one central alphabet. For example, on January 31st, the seven alphabets were; L, A, E, I, K, T, V. The central alphabet was L. The challenge is to make as many four-letter or longer words using the above alphabets (the L must be present in each word). The player must also get the pangram—the one word in which all the alphabets are used. Yesterday’s pangram was ‘talkative’. Bee is certainly like the Indian schooling system because it slots you according to the number of points you make; it starts with Beginner and moves through seven stages such as ‘Solid’, ‘Nice’, ‘Great’ before arriving at the ultimate prize—Genius.


Like the Spelling Bee, Wordle works on the scarcity principle; you can only do one puzzle a day. In the online world, where surfeit is a norm, this rationing and anticipation for the next converts players into fans

Like the Spelling Bee, Wordle works on the scarcity principle; you can only do one puzzle a day and this makes it more precious. In the online world, where surfeit is a norm this rationing and anticipation for the next converts players into fans.

The success of Wordle arises also from the simplicity of the game. It is free. (NYT has assured users that Wordle will initially continue to be free on its platform, but this remains to be seen.) It does not require an app to be downloaded. You just open your web browser and play. Based on simple possibility and omission, the game is also straightforward to decode. My six-year-old, wise-beyond-his-years nephew is the newest family member to try his hand at the game. With the slightest of hints, he too is able to crack the Wordle.

The simplicity of the game ensures that it makes no great demands on one’s time or faculties. The Bee was/is a time suck, and those who do it, keep it open on their phones, dipping in and out of it through the day. The Wordle on the other hand is the day’s morning cup of coffee. It is the quick-fix entry into the schedule. If one gets it in three tries one feels ‘Splendid’, if one gets it in the sixth, one can only go ‘Phew’. Solving it gives a puzzle solver a sense of easy but achievable accomplishment.

Social media has ensured that an accomplishment is nothing if it cannot be shared. The actual USP of Wordle is that it allows you to share your results and your series of answers, without giving the answer away. And this is what has made the game truly viral. It is not enough to solve it, you need to know how others have fared and you need to inform others how you fared. Every time you finish a game, you will get your statistics. For example, I’ve played 21 games; in these 21 games, I’ve solved it in the third try six times and in the fourth chance, six times as well. As the game moves to a new platform, players are worried about losing their past statistics and streaks. Wardle has ensured them that this will not happen.

It is only natural that a game like this which has seen such a surge in popularity will spawn a series of spinoffs. The potty mouthed can try the Sweardle, “the sweary four-alphabet word guessing game”. The super geeky can try the six-letter Wordle found on Metzger.

Social media has ensured that an accomplishment is nothing if it cannot be shared. The actual USP of Wordle is that it allows you to share your results and your series of answers, without giving the answer away

These multiple versions and the fact that millions are logging in to play word puzzles harks back to a time of simpler pleasures. These are all single-person games, which allow for communities to be built around it. While obsessing over NYT’s Bee, I would scroll through Twitter for the tell-tale Bee emoji. Players of the game never reveal answers or clues online, but they do vent frustration for all to see. I remember feeling great kinship for Benjamin Dreyer, author of Dreyer’s English, when Bee did not accept the word ‘pituitary’ and he sent out a cryptic Tweet into the world that it was a “gland in the body!!” with the signature bee emoji at the end. I too had tried multiple times to make ‘pituitary’ that day on the Bee, and each time had been fobbed off. To see an author undergo similar pangs of frustration was oddly comforting.

Humankind has always been attracted to puzzles. In Ancient Greece and Egypt, labyrinth drawings were popular, and puzzles are said to have been found in the Indus Valley as well. Fast forward to today, and I can say that these word games are attractive because they give us a sense of comfort, control and competence. The daily routine of opening a single new puzzle calms. As one sees the number of green tiles in Wordle increase, or as one edges towards Genius on the Spelling Bee one feels as if little things are falling into place. When all about you people are losing their heads and blaming it on you, then Wordle can provide solace. These games in their right balance between simplicity and difficulty gives us an opportunity to feel brainy. Yes, I solved that. Yes, I can be a Genius too. Yes, I can be a Genius every day.

Steeped In the Fabulous