The End of Desire

Indifference to both the good and the bad leads to liberation 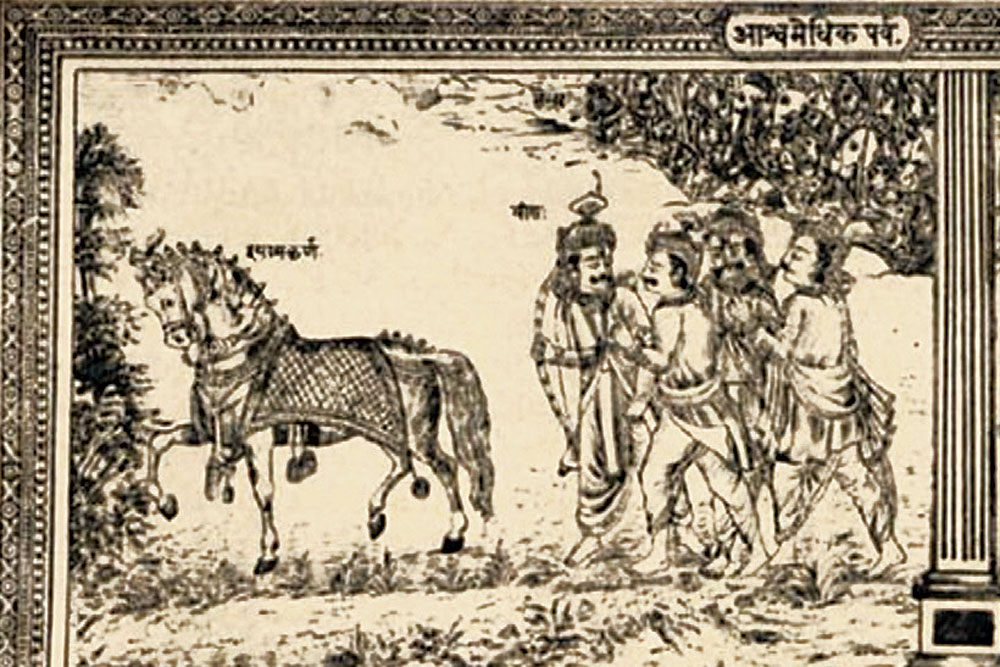 ‘GITA’ IS ANYTHING that is sung. The Bhagavat Gita is the most famous among these Gita texts, widely read, widely translated and commented upon, in multiple languages. But as the adjective ‘Bhagavat’ itself indicates, the Bhagavat Gita isn’t the only Gita. There are other Gitas too, though the Bhagavat Gita is the most famous and may very well have been the first. The number of texts in this corpus of Gita literature will be somewhere between 50 and 60. These other Gita texts are: (1) from the Mahabharata; (2) from the Puranas; (3) from Ramayana texts; or (4) standalone. From the Mahabharata, other than Bhagavat Gita, the most famous Gita is undoubtedly Anu Gita, followed by Vyadha Gita. In the Mahabharata, there is a section (parva) known as ‘Ashvamedhika Parva’. Ashvamedha means a horse (ashva) sacrifice (medha) and the parva is so named because Vedavyasa and Krishna ask Yudhishthira to undertake a horse sacrifice. At that time, Arjuna asks Krishna to remind him about the lessons of the Bhagavat Gita, since he has forgotten everything, and Krishna is about to leave for Dvaraka. In the critical edition of the Mahabharata, the Anu Gita has 35 chapters. But sometimes, the first few chapters in this, the conversation between Kashyapa and a siddha Brhmana, is referred to as the Anu Gita.

At the time of the horse sacrifice, Arjuna spoke to Krishna. ‘O mighty-armed one! O son of Devaki! When the battle presented itself, I got to know about your greatness, the truth about your lordship and your form. O Keshava! Out of affection towards me, you spoke to me then. O tiger among men! However, my intelligence has been destroyed and I have forgotten everything.’ Krishna was displeased and told Arjuna he couldn’t repeat everything again. However, he repeated a conversation with a Brhmana. There was a Brhmana who was a siddha, that is, he had been freed from the cycle of samsara. In search of advice and instruction, the sage Kashyapa went to this siddha Brhmana. In reply to Kashyapa’s questions, the siddha Brhmana said the following.


‘After a time, I became indifferent, beyond the opposites and without a desire to do anything. Afflicted by great grief, I abandoned this world. Through satisfaction in the atman, I then obtained this success’

‘Through different kinds of deeds and by resorting to auspicious yoga, those who are mortal can go to the world of devas and find a sojourn there. However, there is no happiness that is ultimate. There is no sojourn that is eternal. When one is dislodged from a great position, one has to face misery again and again. Because I practised sin, I obtained inauspicious ends and suffered misery. I was overcome by desire, anger, thirst and delusion. I have gone through deaths again and again. I have gone through births again and again. I have eaten many kinds of food. I have suckled at many kinds of breasts. I have seen many kinds of mothers and fathers who are different from each other. I have faced diverse kinds of happiness and unhappiness. I have suffered disrespect and great hardships on account of relatives and those who are not related. I have suffered from extreme and terrible physical and mental pain. I have faced extreme dishonour and the terrible death of my relatives. I have descended into hell and endured hardships in Yama’s abode. There has always been old age, disease and many kinds of hardship. In this world, I have experienced extreme opposite sentiments [like joy and misery, heat and cold]. After a time, I became indifferent, beyond the opposites and without a desire to do anything. Afflicted by great grief, I abandoned this world. Through satisfaction in the atman, I then obtained this success. I will not come to this world again, nor will I go to any other world. Amidst this creation of subjects, through this success, my atman has obtained an auspicious end. That is the reason I have experienced excellent success. From here, I will go to the supreme. From there, I will go to what is superior still. There is no doubt that I will obtain the foremost state of being merged with the brahman. I will not return to the mortal world again.’ 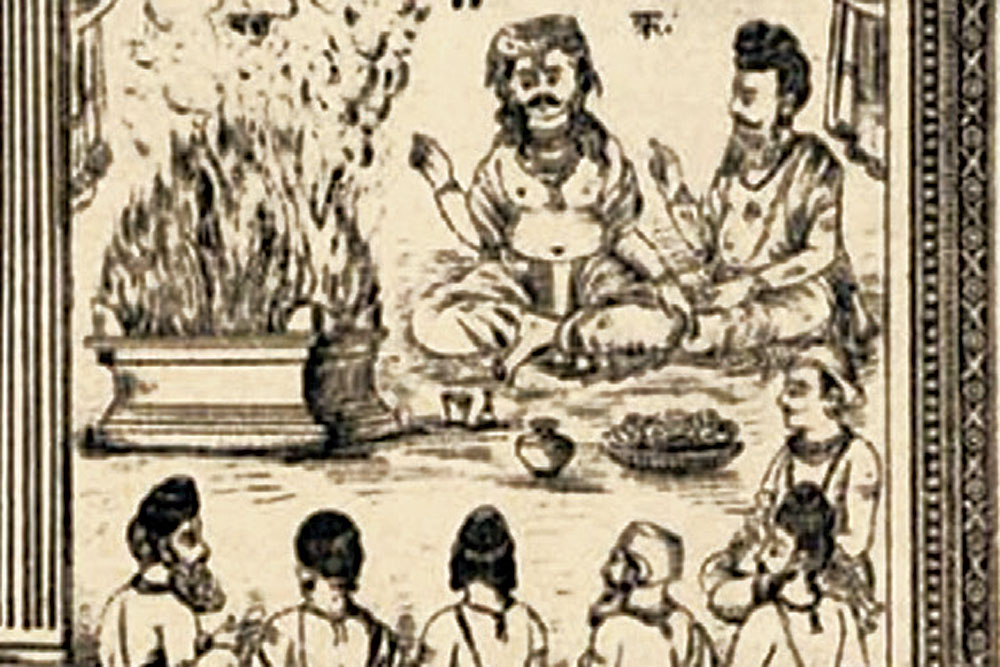 Naturally, Kashyapa wasn’t satisfied. He wanted to know more. Kashyapa asked, ‘How does the body go away and how does one get another again? How is one freed from the hardships of roaming around in this cycle of life? Having freed oneself from the body, how is one united with the atman? Having been freed from this body, how does one obtain another one? How does a man enjoy the fruits of the good and bad deeds done by him? If one is freed from the body, what is the karma that one enjoys?’
The siddha Brhmana replied, ‘A body is adopted to perform acts that increase the lifespan and bring fame. However, all of these eventually decay. When there is little of lifespan left, the jivatman begins to act in a contrary way. When destruction presents itself, his intelligence turns perverse. The jivatman knows his spirit, strength and the time. Yet, though this acts against the jivatman, he eats excessively and out of season. He serves everything that causes greater difficulties for him. He eats too much, or does not eat at all. He tastes rotten food and tainted food and other kinds that are perverse. He eats more food than he should. Or he eats before the earlier food has been digested. He indulges in excessive exercise or sexual intercourse. Though his natural speed has diminished, overcome by greed, he always engages in tasks. He eats food that is too juicy. Or he sleeps during the day. Even when the time has not come, these taints cause agitation that is brought on by the person himself. There is disease because of these taints and death comes as the end. Sometimes, one resorts to hanging and other methods of killing oneself. Else, though alive, the physical body of a creature decays because of such things. When the wind in the body is fierce and begins to blow violently, heat is generated. This reaches all parts of the body and constrains the breath of life. Know that when the heat in the body becomes excessive, strong and violent, it injures the inner organs and the place where the breath of life resides. In great pain, the physical body of the jivatman melts away. The inner organs are pierced and the creature gives up the physical body. Know that the jivatman suffers great pain. All creatures are always extremely anxious about birth and death. They are seen to abandon the physical bodies. The five elements are established in prana and apana. This breath of life ascends upwards and causing hardship, frees itself from the body. When it leaves the body, there is no longer any life to be seen. There is no heat. There is no breath. There is no beauty and the senses have left. When the jivatman abandons the body, a man is said to be dead. There are ducts through which a person with a body perceives the objects of the senses. However, the breath of life, which is sustained through food, can no longer see them. The eternal jivatman makes those ducts in the body work. When those inner organs are shattered, the jivatman rises up and enters the heart, thereby swiftly curtailing all spirit. In such a situation, despite being conscious, a creature cannot discern anything. The inner organs are overwhelmed and knowledge is enveloped in darkness. The jivatman no longer has a place to reside and is agitated by the wind. At such a time, the being breathes deeply and breathes extremely painfully. The jivatman emerges swiftly, causing trembling. The body is bereft of sensation. The jivatman discards the body, but is still enveloped by its own deeds. It is marked by all its sacred and auspicious acts and also by all its wicked deeds. Even when it is dark, those with eyes can see fireflies appear and disappear. In that way, those who possess the sight of knowledge can see. Similarly, successful ones with divine sight can see the act of a creature abandoning the body and being born again, as it enters a womb. According to the sacred texts, a creature is seen to occupy three spots. There is karmabhumi, the arena of action. All creatures reap the fruits of their good and bad deeds there. Depending on the good deeds they have themselves performed in this world, they reap the fruits. Those with wicked deeds in this world go to hell, because of those deeds. A wicked man cannot speak and is severely cooked in hell. Since it is extremely difficult for the atman to be freed from such a state, one must do one’s utmost to protect oneself against this. There are states obtained by creatures that ascend upwards. There are many like stars in the lunar disc and the solar disc. Through their own radiance, they shine in those worlds. Know that these, and others, are meant for men who are the performers of auspicious deeds. However, when these deeds are exhausted, they are repeatedly dislodged from there. Heaven is superior to these. But even there, the superior, the medium and the inferior exist. There is discontent there too.’

The End of Desire