The Double Life of KM Ganguli

Was the first English translator of the Mahabharata really the scholar we think? 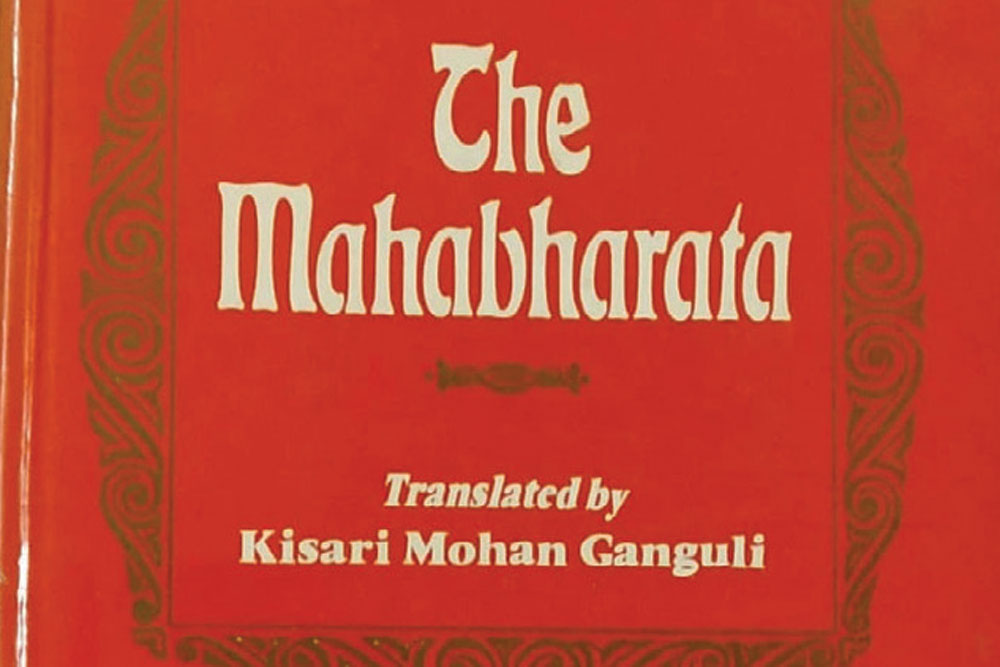 IN SUCCESSIVE COLUMNS, I have given you information about Ganguli’s Mahabharata. In the last column, I mentioned what AT Pringle, assistant secretary, Madras, and member of the Governor General’s Council, wrote in the files in 1898. The context was a pension that would be given to Ganguli.

From those files from 1898, let me now quote from the noting of GW Forrest, deputy secretary: ‘I went into the subject with great care some years ago… It was then pointed out by me that the money spent on what competent critics inform me a somewhat poor translation of the Mahabharata would have, founded a Chair of Sanskrit in one of our colleges. Babu Pratap Chandra Roy, C.I.E., was incompetent to do the work; he knew neither English nor Sanskrit. He employed Babu Kisori Mohan Ganguli for a period of twelve years on an average salary of Rs 2,000 per annum; he received altogether Rs 25,000 at Rs 250 per part for 100 parts. It is stated that men who got much less than Ganguli Babu aided in the translation. Babu Kisori Mohan Ganguli must have known that Babu Pratap Chandra Roy presented a memorial in 1888 asking for a grant of Rs 25,000 and stating that he has undertaken the task of translating the Mahabharata. Babu Kisori Mohan Ganguli was therefore a party to a literary fraud. It is only when Babu Pratap Chandra Roy dies that Babu Kisori Mohan comes forward and says I have done the work and have been inadequately rewarded for my labour. Like Babu Pratap Chandra Roy he seems highly accomplished in the art of working on men with good intentions at home. I took some real trouble when in England to let the real facts be known. By refusing to give any pension a death-blow might be given to future attempts to work on the philanthropic feelings of scholars like Sir Edwin Arnold and Dean Farrar, who have no opportunity of knowing the real facts of a case. On the other hand, a pension would be regarded at home as a very graceful concession. But before any pension be granted a letter should be secured from Babu Kisori Mohan Ganguli stating that he would consider himself sufficiently rewarded by a pension of Rs 1,200 a year, and that he will not either directly or indirectly make any further claim on the Home or Indian Government.’ The Mahabharata has 18 parvas. But underlying this, there is also a 100-parva classification and the 100 parts refers to that. Converted to today’s rupees, those sums quoted for 1888 and 1898 are fairly large. Notice the sense in which the word ‘memorial’ was used. 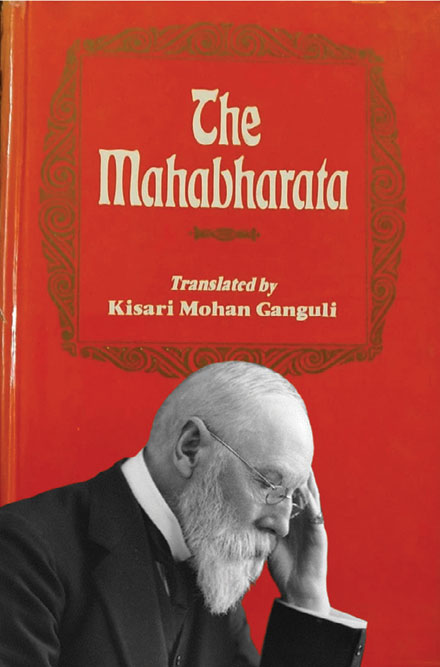 At that time, George Abraham Grierson had probably just been appointed superintendent of the Linguistic Survey of India. His views were sought and they were more positive: ‘A translation of the Mahabharata had long been much wanted, but the task was too great and no one ventured to undertake it. The publisher and the translator therefore deserve every credit for their courage in undertaking the work, and for their really wonderful perseverance in carrying it through… . Another merit of the work is that it has set a good example. Other publishers in Calcutta have taken up the business of bringing out translations of Sanskrit works, and have, apparently found it a profitable speculation. A man called Manmatha Nath Dutt has brought out a translation of the Ramayana, the companion epic to the Mahabharata, without any great flourish of trumpets. Another is bringing out translations of the Puranas under the title of “The Wealth of India”. These are all creditable and useful works, and, though the tasks undertaken were in no case anything like so heavy as that undertaken by Pratap Chandra Rai, we may be assured that they would not have been undertaken at all had he not shown the way.’ Grierson got it partly wrong. It was Manmatha Nath Dutt who published translations of the Puranas under ‘The Wealth of India’ series. But he was partly right. Manmatha Nath Dutt generally did all his stuff without any great flourish of trumpets. Or at least, he didn’t get to use proper trumpets. Unlike Dutt, Ganguli got plenty of publicity. That’s the reason Ganguli keeps getting talked about, almost with a hagiographic tinge, a point I have mentioned earlier. You could of course say that having written some kind of partial biography of Dutt (Manmatha Nath Dutt: Translator Extraordinaire), I am biased.

Let me now quote from an ‘abstract’, prepared in the files: ‘The English translation of the Mahabharata was undertaken by Babu Pratap Chandra Rai some 14 years ago. He asked for the patronage of the Government of India, an in noting on the application Mr. (now Sir Antony) MacDonnell observed as follows: – “Babu Pratap Chandra Rai is himself not the editor or translator. He has a lot of pundits, etc, who translate, and people have told me that he treats his employees in a very shabby way. It is a pure speculation with this man, and I don’t believe he is animated by the least love of literature in what he does. His object is money.”… It was eventually decided to subsidize the work by a grant of Rs 11,000 from the Home Department. Babu Pratap Chandra Rai received an additional sum of Rs 2,000 under orders from the Secretary of State and a further grant of Rs 2,000 as a price of 20 sets of the work supplied to the India Office. We have no accurate information as to the exact amount he got from Local Governments and Native Chiefs, but we know he received large grants of money… Babu Pratap Chandra Rai is dead, and Babu Kisori Mohan Ganguli now claims to have done the actual work of translation and has memorialized the Government of Bengal for a special pension in recognition of his literary services in bringing the work to its completion. In his memorial he cites the case of Dr. Rajendra Lala Mitra as a precedent… . (a) Was the work ordinary hack work, which was sufficiently paid for by the stipend which Mr. Ganguli presumably drew; or was it work of a sufficiently higher character to entitle Mr. Ganguli to special consideration? (b) Is Mr. Ganguli incapable of earning his livelihood?… As regards (a), there is a diversity of opinion on the merits of the translation… With reference to the inadequacy or otherwise of the allowance which Babu Kisori Mohan Ganguli drew, Mr. Pringle expressed the opinion that when Kisori Babu undertook the work on payment — whether sufficient or not — he could hardly complain, while Dr. Grierson considers the allowance to have been quite sufficient. It was an average salary of Rs 2,000 a year for a period of 12 years. As to (b), the Government of Bengal states that Babu Kisori Mohan Ganguli’s “income from this [more translations] and similar works is small and very precarious, and infirmities of age are coming upon him now that he has passed his fiftieth year.” Dr. Grierson, on the other hand, points out other sources of his income, such as those derived by drawing up petitions to Government on behalf of natives of rank and position and in attempting to obtain for them titles of honour.’

Until I read these files, I did not know about Ganguli writing petitions. Grierson wrote, ‘I have known the man for some years, and to me he was always a “Mulakat Babu” and never a Pandit. It was a long time before I found out that he knew any Sanskrit at all, and when, comparatively lately, I heard that he was the translator of the Mahabharata, I was much surprised… During the early stages of the issue of the translation, the report, which may or may not have been true, was that Pratapa Chandra Roy had several men in his employ working at the translation. Anyhow, I remember that a man came to me some eight or ten years ago canvassing for subscriptions, who told me that he was “one of the translators”. He may have been telling untruth. He was not Kisari Mohan Ganguli. So far as I am aware, Kisari Mohan Ganguli had, when I was in Howrah, the reputation of being a kind of upper class petition-writer. He certainly has a very remarkable command of English, but the style is somewhat marked, and can be identified. When any swell Calcutta or Howrah native had to send in a petition to Government, Kisari Mohan Ganguli used to be frequently employed to draw it up. This, I must repeat, was only common report, which may have been false, but more than one petition has been sent to me for report, in which I was almost certain that I recognized his style… I used also to be told that he “ran” people for titles. In other words, if a man wanted a title, Kisari Mohan Ganguli did the pushing, — for a consideration. This is borne out by a copy of a letter from Mr. Babington Smith, dated 29th June 1897, in the file of the Office of the Private Secretary.’

Harsh, but Kisari Mohan Ganguli does not quite come across as the scholar and translator he is typically portrayed as. In the next column, I will give you his letter of appeal to the government of the day.