The boon that protected the dharma of the forest 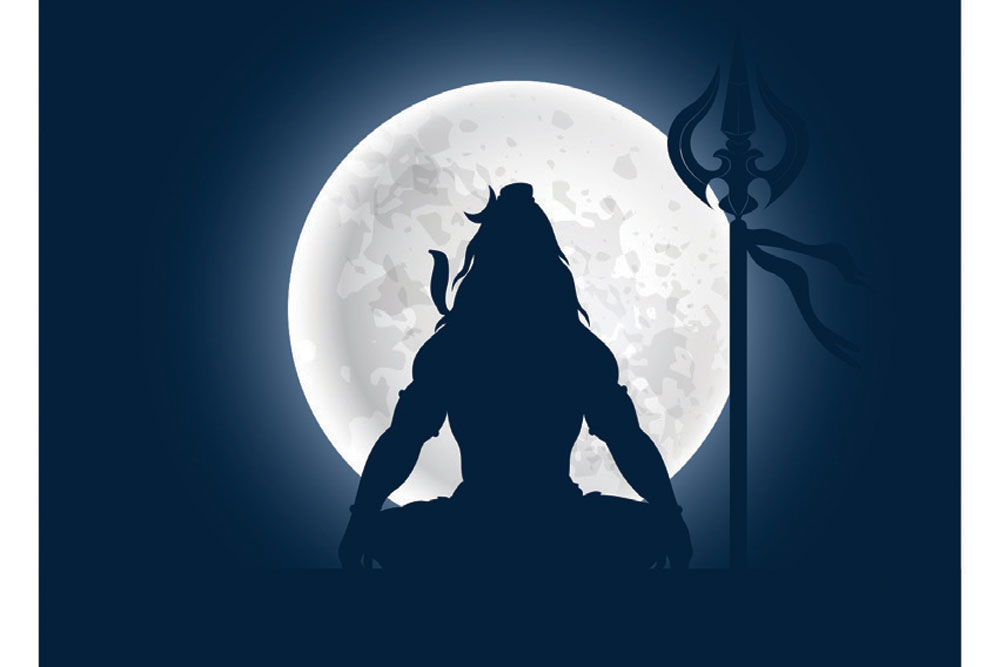 
THE JYOTIRLINGAM OF Nageshvara is in Darukavana and it is not easy to identify where it is located geographically. Darukavana is usually understood to be a forest of devadaru trees. But in this story from Shiva Purana, the name owes its origin to a demon named Daruka.

Suta said, “There was a rakshasa named Darukaa, insolent because of a boon obtained from Parvati. Her husband, Daruka, was supreme in strength. Along with many other rakshasas, he created carnage among the virtuous. He destroyed sacrifices and dharma in the worlds. Along the shores of the western ocean, there was a forest that was prosperous in every possible way. In every direction, it extended for sixteen yojanas. Whenever Darukaa went to the forest for her own pleasures, the ground there was covered with trees and every other kind of accompaniment. Devi gave Darukaa that forest to look after it. They remained there and caused fear to all the others who were there. Because of Daruka rakshasa and his wife, Darukaa, all the people suffered. They went and sought refuge with the sage Ourva. The people said, “O maharshi! Please grant us refuge. Otherwise, the wicked ones will kill us. Other than you, there is no one else on earth who can offer us refuge. On seeing you, all the rakshasas run a long distance away. Shiva’s blazing energy always radiates in you.” Ourva replied, “The rakshasas may be supremely strong. But if they cause violence to other beings on earth, they will lose their own lives. When sacrifices are destroyed, all the rakshasas will lose their lives.” The devas got to know about the reason behind the curse. Therefore, they made efforts to fight against the enemies of the devas.”

“Seeing this, the rakshasas resorted to consultations. The rakshasas said, “What should be done? Where will we go? We are fighting and are being killed. They are fighting and are not being killed.” Unable to think of a means, they were constantly miserable. Rakshasi Darukaa also got to know that a calamity had presented itself. Therefore, she spoke about the boon granted by Bhavani. Darukaa said, “When I worshipped her earlier, Bhava’s wife bestowed a boon on me. If you so wish, you can come to the forest with me. I obtained a boon from her. Let the rakshasas be taken to the forest that is in the water [clearly, there was an island] and remain there happily.” Hearing the rakshasa’s words, the rakshasas were filled with joy. They lost their fear and spoke to each other. “She is blessed. Our queen has been successful in saving our lives.” There were people who had suffered many miseries on account of the rakshasas earlier. Meanwhile, they arrived there, to fight alongside the devas.”

“The rakshasas took everything to the city that was land in the middle of water. The rakshasa praised Devi and uttered words of “victory”. Without any fear, all of them remained there, in the middle of the ocean. They remained inside the city in the water and amused themselves. The rakshasas never came to earth. Scared of the sage’s curse, they remained in the water. They seized people travelling in boats and took them to the city. They hurled some of them into prisons in the city and killed some of them. Because of the boon granted by Bhavani, the rakshasas were fearless. Remaining there, they started to cause sufferings again, wherever they could. Earlier, people constantly faced fear on land. Now, they constantly faced fear in the water. Sometimes, the rakshasa emerged from the city in the water. She obstructed the path. Standing there, she made people on land suffer. Meanwhile, many beautiful boats arrived there and all of them were full of people. Seeing these boats, the rakshasas were delighted. Those crooked ones quickly rushed there and seized them. Those immensely strong ones brought them to the city. They hurled the people into prisons and bound them up in strong fetters.”

“Among them, there was a Vaishya named Supriya. He was auspicious in conduct and always devoted to Shiva. He was loved by Shiva. He never remained without worshipping Shiva. He followed Shiva’s dharma in every possible way, wearing bhasma and rudraksha as ornaments. When he could not perform the worship, he did not eat. There too, the Vaishya engaged in worshipping Shiva. In that prison, he taught many people how to worship Shiva using a parthiva lingam. According to their own desires, all of them worshipped Shiva. They used many modes, depending on what they had seen and what they had heard. While they were there, some of them sat in excellent asanas and immersed themselves in dhyana. Some of them delightedly worshipped Shiva in their minds. Their leader created a parthiva lingam, followed the norms and directly worshipped Shiva. There were others who did not know about the methods. They remembered the supreme mantra ‘Namo Shivaya’ and immersed themselves in meditating on Shankara. In this way, as the Vaishya worshipped Shiva, six months passed without any impediments.”


In this forest, the dharma of the varnas, brahmanas, kshatriyas, vaishyas and shudras will always be observed. The best among sages will be here, never with tamas qualities. They will propound Shiva’s dharma and practice Shiva’s dharma

“On one occasion, one of the evil-souled rakshasa’s attendants saw Shankara’s beautiful form in front of him. He went and informed the king of rakshasas. The king of rakshasas, Daruka, quickly arrived there. Though he was strong, he was agitated and asked about Shiva. Daruka asked, “O Vaishya! Who are you meditating on?” He replied, “I do not know.” Hearing this, the rakshasa became angry and sent rakshasas, asking them to kill him. Instructed by him, they swiftly went there to kill him, with many types of weapons. Seeing them arrive, Supriya was scared, but his mind was fixed on Shankara. He cheerfully remembered Shiva and repeatedly chanted his names. When he prayed in this way, Shambhu emerged from a cavity. In the midst of this, Shiva’s form was that of a mass of radiance. He was with his attendants. On seeing him, Supriya worshipped him. Worshipped in this way, Shambhu was pleased. He gave him the weapon named Pashupata. He himself killed the bulls among the rakshasas and all their followers and destroyed their equipment. It was wonderful. Shankara protected his devotee and killed the wicked. Having killed all of them, he bestowed a boon on the forest. “In this forest, the dharma of the varnas, Brahmanas, Kshatriyas, Vaishyas and Shudras will always be observed. The best among sages will be here, never with tamas qualities. They will propound Shiva’s dharma and practice Shiva’s dharma.” At this time, the rakshasa known as Darukaa, who was distressed in her mind, praised Devi Parvati. Pleased, Devi asked, “What will I do?” She replied, “Please save my lineage again.” Parvati said, “I will protect your lineage.” Saying this, she quarreled with Shiva. Shiva saw that Devi was angry. However, the lord was bound by the boon he had conferred. Therefore, he cheerfully said, “Do what you wish to.” Parvati was extremely happy to hear the words spoken by her husband, Shankara. Parvati said, “Your words will come true when it is the end of the yuga. Until then, it is my view that Creation should possess the qualities of tamas. You should prove that the words spoken by me will come true. This rakshasa Darukaa is actually a devi, and is my Shakti. She is strongest among all the rakshasis. Let her rule over a kingdom of rakshasas. These wives of the rakshasas will give birth to sons.” Shankara said, “O beloved! If you say so, please listen to my words. To protect devotees, I will happily remain in this forest. Whoever is seen to cheerfully establish the dharma of the varnas here, will become the emperor. Otherwise, when kali yuga is over and a new satya yuga starts, there will be a lord of men famous under the name of Virasena, Mahasena’s son. He will be extremely valiant. He will be my devotee and will be able to see me. When he sees me, he will become an emperor.” In this way, the couple laughed and spoke to each other. They themselves remained in that place and brought greatness to it. In the form of the jyotirlingam, Shiva came to be named Nageshvara. Devi Shivaa became Nageshvari. Both are loved by virtuous people.”

“In the beautiful region of Nishadha, Virasena was born in a Kshatriya lineage. [When Shiva spoke to Parvati, this was in the future tense. By the time Suta spoke to the sages, the incident belonged to the past tense.] He was the son of Mahasena and was loved by Shiva. With a parthiva lingam, he worshipped Isha. Virasena performed extremely difficult austerities for twelve years. Shankara manifested himself and spoke. “Make a wooden boat that is in the shape of a fish and smear it with tin. I will create Yogamaya and give her to you. Accept her. With her and your men, enter the boat. Use that to go and enter the cavity I created. Enter the place and worship Nageshvara. You will obtain Pashupata there. Use that to slay the rakshasa and others.” In this way, Shiva conferred a boon and Virasena became capable of doing everything. In this way, the divinity originated as Nageshvara, the lord of all the jyotirlingams. In the form of the jyotirlingam, he satisfies all the desires in the three worlds.”