The Dilemmas of Harishchandra 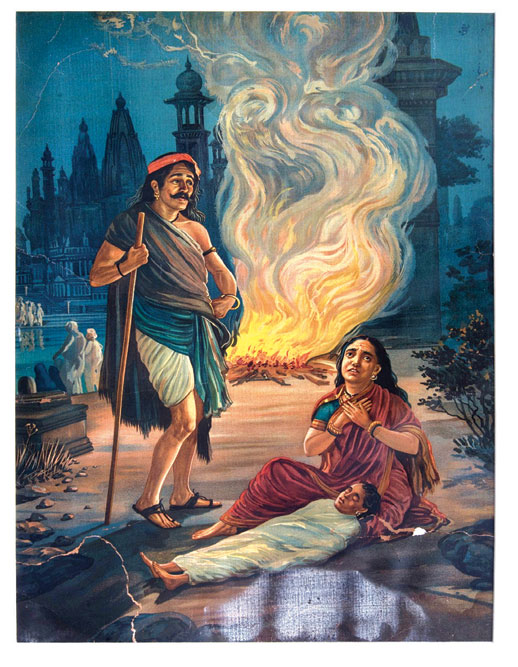 ONE OF THE most delightful stories about the conflict of dharma is Harishchandra’s account. This is mentioned in many texts. I will recount the Markandeya Purana version.

But just as he was about to leave, Vishvamitra stopped him. ‘What about the royal sacrifice I performed for you? That dakshina [fee for officiating at the sacrifice] is still due to me. You can’t leave without paying me that.’ Harishchandra said that he had nothing else left to give. However, if Vishvamitra gave him a month, he would pay him the dakshina. Vishvamitra agreed to this, but also told him that if he did not adhere to his pledge, Vishvamitra would curse him. With his wife and son, he went to Varanasi. Since they travelled slowly, a month had passed by the time they reached Varanasi. As Harishchandra was about to enter Varanasi, he saw Vishvamitra standing at the gate. ‘Where is my dakshina?’ asked the sage. ‘A month has passed.’ ‘Not quite,’ replied Harischandra. ‘Half of a day is still left. Wait for half a day and I will pay you your dakshina.’ Vishvamitra left, promising to return when the day was over. But where would the money come from? ‘Protect your dharma. Protect your pledge. You have never deviated from the truth. Sell me and get the money,’ said Shaibya. There was no way Harishchandra was going to agree to this. But there was the question of Vishvamitra’s dakshina and Harishchandra was torn apart by the conflict of dharma. How could he do something as abhorrent as selling his wife? Like the condemnation of Rama, many people today would say Harishchandra was a ‘bad husband’. How can a husband sell his wife?

Eventually, he decided to sell Shaibya and pay Vishvamitra. As he stood there and proclaimed that his wife was up for sale, an aged Brahmana arrived there and offered to buy this ‘servant-maid’. This being agreed to, the Brahmana started to drag Shaibya away. When his mother was being dragged away, Rohitashva wept and clung on to her garment. Shaibya pleaded with the Brahmana that he should buy Rohitashva too. Therefore, the Brahmana paid some more money to Harishchandra and took Shaibya and Rohitashva away. It was now afternoon and Vishvamitra arrived, asking for his dakshina. Harishchandra handed over whatever he had obtained as payment for Shaibya and Rohitashva.

Harishchandra was taken away to the Chandala’s house. The Chandala had a contract over the cremation grounds of Varanasi. Anything left on the corpses, garments and things like that, were for him to strip away and keep for himself. The Chandala entrusted this task to Harishchandra. ‘Remain here night and day, waiting for the dead bodies to arrive. One-sixth of what is obtained from corpses is to be given to the king. Half is my share and one-third is your salary.’ This is what Harishchandra did and he was reduced to the state of a Chandala himself. His body was rough and coarse all over. He had a mass of hair and exuded a bad odour. He rushed around here and there, with a staff in his hand. ‘This is the price I have obtained for this corpse. This is my share. This belongs to the king. This belongs to the chief Chandala.’ Saying this, Harishchandra rushed around in different directions. He assumed a different kind of life. He was clad in a garment made by stitching together tattered rags. His face, arms, stomach and feet were smeared with ash from funeral pyres. He was satisfied with the many kinds of food that were offered to the corpses. His head was ornamented with garlands that he gathered from them. Twelve months passed. The king no longer remembered his wife or son.

When a year had passed, Shaibya arrived at the cremation ground, bearing the dead Rohitashva. He had been bitten by a snake. Harishchandra had changed so much that Shaibya couldn’t recognise him. And Harishchandra couldn’t recognise Shaibya and Rohitashva. But eventually, they recognised each other and lamented at their lot. Shaibya said, ‘If this is destiny, then there is no help for dharma. There is no point to worshipping gods, Brahmanas and others on earth. Without dharma, what is the point of truth, uprightness and non-violence? You were supremely devoted to dharma, but have been deprived of your own kingdom.’ Harishchandra replied, ‘We are miserable and hanker after our son. Let us beg Yama for him. Therefore, let us quickly go to the place where our beloved son has gone.’ They thought about killing themselves. But there was a problem there too. Harischchandra added, ‘I am not even my own master. If I enter the fire without taking the Chandala’s permission, in the next birth, I will again become the servant of another Chandala. Or I will descend into hell and become an insect that feeds on worms.’ Nevertheless, after some more deliberation, they decided to immolate themselves in a fire. Harishchandra kindled a funeral pyre for himself, his wife and his son.

The gods arrived and dissuaded them. All this had been a device to test Harishchandra’s devotion to dharma and Vishvamitra also arrived, along with the gods. Indra promised Harishchandra that he would go to heaven along with Shaibya and Rohitashva. There was a great shower of flowers and the drums of the gods were sounded. Harishchandra and Shaibya were restored to their natural states and Rohitashva was revived. However, Harishchandra was not through with dharma. He replied, ‘O king of the gods! Without the permission of my master, the Chandala, I am not free. Therefore, I cannot go to the abode of the gods.’ It was then revealed that the Chandala (Pravira) was actually the god Dharma, who had arrived in the form of a Chandala to test Harishchandra. Hence, Harishchandra had the Chandala’s permission to go to heaven. But he was not done yet. He said, ‘O king of the gods! As a result of grief over me, the people in the city of Kosala are submerged in misery. Leaving them there, how can I now ascend to heaven? It has been said that the sin of abandoning someone who is devoted is comparable to the sin from killing a Brahmana, a preceptor, a cow or a woman. If I abandon the innocent ones who worship me and are devoted to me, I do not see any happiness in this world or in the next world. O Shakra! Therefore, go to heaven. O lord of the gods! I will go to heaven only if they can go there with me. Or I will go to hell with them.’ Since the store of good merits wasn’t enough for everyone to go to heaven, it was agreed that Harishchandra, Shaibya and Rohitashva and all the subjects would go to heaven for a single day. The store of good merits would be shared equally. When that single day was over, they returned to earth and King Harishchandra ruled for many years.

The Harishchandra ghat in Varanasi, and the allied cremation ground, is named after King Harishchandra. There are several decisions he took on grounds of dharma. The broad template is no different from that of Rama’s, being a good king and being truthful to one’s pledge.