The genesis of Bengal’s biggest festival 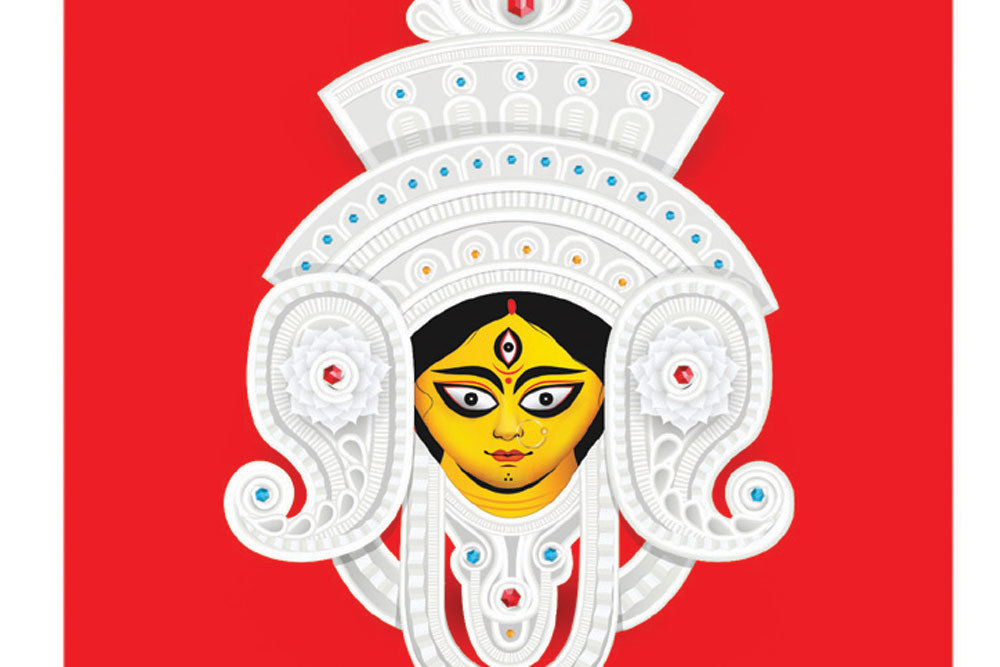 
AT THIS TIME of the year, Durga Puja is celebrated throughout Bengal, indeed, in some other eastern states, too, with similar rituals and practices. I shouldn’t have said Bengal, since Durga Puja is celebrated wherever Bengalis reside and congregate. When I was a student in Delhi, I was often asked by non-Bengali classmates, “What is this thing you Bongs [Bengalis] have about Durga Puja? Every Delhi Bong goes to Kolkata and every Kolkata Bong comes to Delhi.” The worship of Devi doesn’t have anything particularly Bong about it, since Sharad Navaratri is celebrated throughout the country, in one form or another. Navaratri means nine nights and every month, there are two such Navaratris, in shukla paksha and in krishna paksha. Typically, devas and devis aren’t worshipped during krishna paksha. Even then, there are twelve Navaratris in a year. Four of these are special for worshipping Devi—(1) Sharad/ Ashvina Navaratri; (2) Vasanta/Chaitra Navaratri; (3) Magha Navaratri; and (4) Ashada Navaratri, named after the lunar months of Ashvina (September/October), Chaitra (March/ April), Magha (January/February) and Ashada (June/July). Of these, Magha and Ashada Navaratris are known as Gupta Navaratris, the word “gupta” meaning hidden or secret. Therefore, Devi is worshipped during these two Navaratris, respectively, in winter and during the monsoon, but that worship is not openly done. It is a private worship, not public, done by the priest and most people don’t even know that these two Navaratris exist. That leaves Ashvina Navaratri and Chaitra Navaratri, corresponding to autumn and spring. As I said, Devi is worshipped during both, but we often identified Devi’s worship more with Ashvina Navaratri. Durga Puja happens at that time.

In 2021, Kolkata’s Durga Puja was inscribed on UNESCO’s Representative List of the Intangible Cultural Heritage of Humanity. UNESCO tells us, “Durga Puja is an annual festival celebrated in September or October, most notably in Kolkata, in West Bengal of India, but also in other parts of India and amongst the Bengali diaspora. It marks the ten-day worship of the Hindu mother-goddess Durga. In the months preceding the festival, small artisanal workshops sculpt images of Durga and her family using unfired clay pulled from the Ganga River. The worship of the goddess then begins on the inaugural day of Mahalaya, when eyes are painted onto the clay images to bring the goddess to life. It ends on the tenth day, when the images are immersed in the river from where the clay came. Thus, the festival has also come to signify ‘homecoming’ or a seasonal return to one’s roots. Durga Puja is seen as the best instance of the public performance of religion and art, and as a thriving ground for collaborative artists and designers. The festival is characterized by large-scale installations and pavilions in urban areas, as well as by traditional Bengali drumming and veneration of the goddess. During the event, the divides of class, religion and ethnicities collapse as crowds of spectators walk around to admire the installations.” This is accurate, but not entirely. It is also the impression we form from films like Kahaani (2012).


Mahalaya has nothing to do with Durga puja, at least, historically. If a Bengali tells you Mahalaya means the great journey, you can say this is not true at all

For a start, Mahalaya has nothing to do with Durga Puja, at least, historically. I have said that the shukla paksha Navaratri in Ashvina is the time for Durga Puja. Before this shukla paksha, there will be a krishna paksha. Mahalaya is the amavasya associated with the krishna paksha, also known as pitri paksha. It is a tithi (lunar day) for performing shraddhas and offering tarpana to the ancestors (pitris). There are no connotations of it being associated with Durga Puja at all, except that, now that pitri paksha is over, worship of the devas and devis can start. If we like, we can call it the start of Devi paksha. If a Bengali tells you Mahalaya means the great journey and the day signifies the day Durga starts from Kailasa to visit her father’s house in Bengal, you can say this is not true at all. No Sanskrit dictionary will say that Mahalaya means the great journey. Generations of Bengalis have grown up with the belief that Mahalaya signifies the onset of Durga Puja. In large part, this is due to the influence, rather the voice, of a gentleman named Birendra Krishna Bhadra (1905–91). He used to work for All India Radio. In 1931, All India Radio (Calcutta) broadcast a radio programme known as Mahishasura Mardini at 4AM on the day of Mahalaya. This had a combination of songs, vocal renditions of the story and chants of Sanskrit shlokas. The shlokas were primarily from the Devi Mahatmya section of the Markandeya Purana, known in Bengal as “Chandi”.

What the quote from UNESCO describes is a Baroari puja. This is of later vintage, and more on that later. The traditional puja was a “Banedi Bari” puja. “Banedi Bari” means a noble or aristocratic family—let’s say, the zamindars. One uses the expression “Banedi Bari” because zamindar has a legal nuance, and zamindari no longer exists. Every Banedi Bari was historically a zamindar family. Some of these are in Bangladesh now, like Tahirpur (associated primarily with the name of Raja Kansa Narayan, late-16th and early-17th century). Records tell us that he spent lakhs of rupees on Durga Puja. In West Bengal, the earliest example of such puja is probably that of Sabarna Roy Choudhury, started around 1610 CE. There is one that began in 1683 CE by King Rudra Roy of Krishnanagar, ancestor of the famous king, Krishna Chandra Roy. One shouldn’t, of course, forget the puja started in Shobhabazar by Nabakrishna Deb in 1757 CE, a puja that Robert Clive was invited to. The Banedi Bari pujas predated the British, but when some zamindars obtained wealth as a result of British rule, such pujas received a fillip. These Banedi Bari pujas often had their own specific rites and iconography. Such pujas still retain a whiff of nostalgia, but have gone into a relative decline. Wealth is no longer what it used to be and descendants have migrated elsewhere, sometimes outside the country. The poignancy is often depicted in films and television serials. But do realise that the worship of Durga in this part of the country pre-dates all these “Banedi Bari” pujas. The Pala kingdom (750-1161 CE) was in this part of the country and Mahishasura Mardini images from that period and the succeeding Sena dynasty (11th and 12th century) have been found. From roughly the same period, they have been found from the archaeological site of Chandraketugarh. What’s probably true is that this worship of Durga, in her Mahishasura Mardini form, fell into disuse. It was probably revived after Krittibas Ojha’s Bengali version of the Ramayana (15th century) became popular. The Valmiki Ramayana doesn’t mention the incident of Rama worshipping Durga before the fight with Ravana. The Krittibas Ojha Ramayana does (Brahma acted as the officiating priest).

The Pala kings were Buddhists and Buddhism flourished. The Sena dynasty led to a revival of Hinduism and learned brahmanas, known as smarta brahmanas because they specialised in smriti texts, flourished. Though the Sena dynasty did not last long, there were several prominent smarta brahmanas for several centuries. For our purposes, the most important was Raghunandana Bhattacharya, in the 16th century. He was known as Smarta Raghunandana, and wrote copiously on several topics. For our purposes, the relevant texts are Durgotsav Tattva, Durgapuja Tattva and Kritya Tattva. In any Durga Puja, even today, there are mantras. Those are typically from Markandeya Purana. But there are rituals and practices that go beyond mantras. Drawing on Puranas and tantra texts, Raghunandana and others laid out the rituals for Durga Puja, for example, the kalpas (modes of worship). After the awakening (bodhana) on shashthi (the sixth lunar tithi), we tend to think Durga Puja happens on saptami, ashtami and navami (seventh, eighth and ninth lunar tithis), before immersion (visarjana) on Dashami (the tenth lunar tithi). This is indeed what the Baroari pujas do today. But this is not the only kalpa permitted by the texts. Such changes led to Durga Puja shifting from Chaitra Navaratri to Ashvina Navaratri. Perhaps, the kharif crop became more important than the rabi. The fierce Mahishasura Mardini image became domesticated in iconography and came to have a family.

Banedi Bari pujas still survive, with their own kalpas and iconography, as do pujas in mathas and mandiras. What’s the difference between matha and mandira? A matha is a place where monks reside. People may go to the matha because it is a sacred place, but not to worship any specific deity. A mandira is a temple, with a permanent deity instated. Such Durga Pujas in mandiras occur in the temple in Kalighat or in a temple in Bishnupur in Bankura. The Durga Puja that takes place in Belur Math is the most visible example of a puja in a matha. It was started by Swami Vivekananda in 1901 CE.

But such pujas have now been overtaken by Baroari pujas, community-funded pujas. Baroari (baro + iyari) puja means that 12 (baro) friends (iyar) get together and organise a puja. Such pujas started to gain importance during the second half of the 19th century, as the nationalist movement intensified and Durga came to be identified with the mother, that is the country. These Baroari pujas are less careful about rituals. We should remember that.