Riding the waves with a pod off the Omani coast 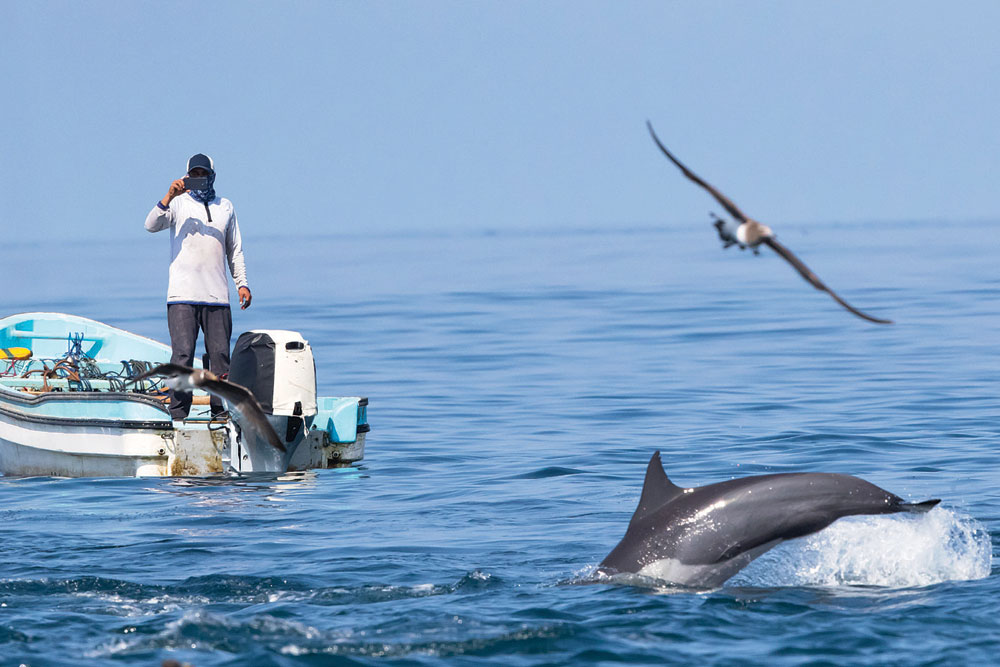 
THE WARM WATERS of Mirbat churned with life as we boarded a small blue and white boat one autumn morning. The air was thick with gulls and the shore lined with herons watching little fish swim past, with a greedy eye. The jetty was just coming to life and shopkeepers were setting up for the morning while young boys led streams of goats up into the wadis. A short, sweet coffee later we were on board a small un-named vessel and set out on a pelagic off the coast of Oman. The cacophony of the small port, with sooty and lesser black-backed gulls mewling and cawing incessantly, receded in only a few minutes. The noise of the outboard motor and the gush of water being sliced by the vessel was the only noise for a long time. This was the silent zone that separated the inland waters from the pelages; the open sea. A sort of buffer between two sovereign realms bound by ocean winds and the wingbeats of intrepid seabirds. Perhaps the few gulls we saw overhead were emissaries of the French sailor Moitessier; ‘You do not ask a tame seagull why it needs to disappear from time to time toward the open sea. It goes, that’s all,’ he had written, caught in the throes of deciding whether to finish a sailing race that he was leading or instead to sail unilaterally away from England and the finishing line to Tahiti. In the end, there was no dichotomy in thought and Moitessier sailed towards the open sea.

We sat expectantly, the tall Dutchman, the scholarly Englishman and I, flanked by two Omani fishermen who had taken an alternate route to economic freedom. It was not that fishing was not doing well. Fishing along the Arabian Sea and the mouth of the Indian Ocean was good for sardines, Indian mackerel, jacks and yellow-fin tuna. It is said that the quantum fished off the coasts of Oman had grown exponentially in the last decade. Yet, for these two, a new avenue had opened up with birdwatching catching on in the Gulf. Tourists were now coming to see the specialities of Salalah; the indescribably brilliant yellow-winged grosbeak and the indecipherably dull Yemeni serin. The mysterious owls, including two new ones recently described to science, that ruled the nights in the arid wadis and the chuckling Arabian partridge that took over at dawn. In between bouts of terrestrial endemics, they would want to venture out to sea to track down the masked booby, the Socotra cormorant, the shearwaters and the petrels. But surely, the big draw for the non-birding fraternity were the dolphins. Closer to the coast, the Indo-Pacific humpbacked dolphins frolicked in the shallows. This dolphin is a chunky being with a hunch of Notre-Dame disfiguring an otherwise perfect profile. In the east their overdeveloped blood vessels make them take an almost pinkish hue, but here off Oman they were still dusky grey. Further out at sea, bottlenose, spinner and long-beaked common dolphins were known to be plentiful. But, betwixt the zones, in the metaphysical, nay almost psychic space of Doris Lessing’s The Marriages between Zones Three, Four and Five, we sat in silence save the puttering of the motor and soft slush of pouring water.

A silent zone is good for naturalists who are always high on adrenaline thinking of what could be seen, then observing, deciphering, documenting and with the thrill of a born-again, awaiting the next bonanza. Many a naturalist turns into a petty poet when assailed by the beauty of the natural world. Sometimes, in an interesting convolution, an author of high merit turns into a minor naturalist. John Steinbeck’s voyage into the Sea of Cortez recorded in his log is a classic of prose, natural reverie and philosophy. I thought of his team sailing into the yonder along the shores of California and Mexico. ‘Each of them in his own tempo and with his own voice discovered and reaffirmed with astonishment the knowledge that all things are one thing and that one thing is all things—plankton, a shimmering phosphorescence on the sea and the spinning planets and an expanding universe, all bound together by the elastic string of time. It is advisable to look from the tide pool to the stars and then back to the tide pool again,’ he advised. And so I gazed first onto the cerulean ripples of water, for there was no tidal pool nearby, and then on to the horizon, as the stars had already been erased by the morning sun.

Three quarters of an hour of silence ended as a steady patter of sooty gulls appeared from nowhere. This is a classic pelagic situation. One moment, there would be not a single bird in the sky and the next, a whirling maelstrom of avian beings can fill the skies. Where they come from and wither they go, is a query for the brave to try and answer. All we could note is that the birds appeared first singly, then in twos and finally in a steady stream. The sooty gulls are a small, white sea-bird dipped deliciously, headfirst into a rich brown chocolate sauce taking great care to avoid two perfect semi-circles above the eyes and the greenish yellow bill marked with black and red. They are also the predominant small gull of the Middle East dwarfed by the larger, white and grey lesser black-backed gulls. There were a few of the large, white giants as well, circling in between the dark sooties. At the horizon, we could see a few fishing boats, small vessels with just a single fisherman in each. As if in hope or perhaps with great learnt wisdom, the boatman veered off towards them. In the distance, next to each boat a Jouanin’s petrel hung in the sky, circling lazily with its long wings almost running perpendicular to the water and then taking air again without ever touching the sea. In contrast, a few Persian shearwaters fluttered on the water, feet pattering against the swell and then taking off in tight circles, with the wings shearing the water perfectly into two avian halves. Smaller Wilson’s storm petrels or what the Mexicans called the Jesus Christ bird, walked onto the water, rump flashing white prettily. Ever so often, a flesh-footed shearwater appeared amongst the gulls, told from the Persian by its all dark plumage and from the petrels by its flesh coloured bill and feet.

“Dolfen,” shouted the boatman shading his eyes against the sun and looking into the distance. “Hanak!” In the distance, near the fishing boats, the water was rippling muscularly and within moments a set of flying creatures emerged in a synchronised fashion from the depths of the sea. They were largish dolphins, dark grey with a darker cape thrown across a falcate dorsal fin. The beak was long and almost pink. A light grey shadow of an hourglass reflected on to the bottom half. Within moments, we were surrounded by an enormous pod of over 300 animals. They swam up against the boat, took off in ever widening circles and leapt prettily, first hunching a little over the swell and then taking off acrobatically, in an arching leap. My first thought was of spinners, given that they were leaping so magnificently into the air. But later, upon more reflection and guidance from my scientist friend, they turned out to be long-beaked common dolphins. The air was now thick with gulls, shearwaters and petrels. Even an occasional masked booby had appeared magically into the mix. The sea was churning with dolphins and in a few more moments we realised why. A large silvery shoal of fish swam up against the boat, bulging and pulsing in the water. “Sardines!” I heard the guide call out. “They are too big for that,” argued the Dutchman who was a bit of an amateur fisherman himself. The guide lapsed into Arabic. Whatever they were, the seas swelled with fish and the dolphins and the seabirds came famously to the party. There we were, three naturalists and two fishermen turned birding guides sitting surrounded by fish, birds and dolphins, soaked in their ephemeral spray and exulting in the great web of life unspun before our incredulous eyes.

I have been on several pelagic trips around the world despite being a terrestrial biologist. In Dominica, a sperm whale mother and calf have slapped water into our boat while we tried to approach close. In Alaska, I have kayaked into a pod of humpback whales. In New Zealand, albatrosses have clambered over each other to feed on the fish oil spread by the guiding boat as Hector’s dolphins sprang out of the sea. In Huatulco, off the Mexican coast, spinner dolphins had kept us company while magnificent frigate birds patrolled the skies. At Mirissa, in Sri Lanka, blue whales dwarfed both the large boat we were on and the accompanying seabirds into insignificance. Three weeks after this momentous Omani pelagic, I was back in a much better apportioned boat off California watching blue and humpback whales with large pods of Risso’s dolphins, looking scarred from some underwater joust that we had not been part of. The pink-footed shearwater took over in that continent from the flesh-footed and the sooty shearwater replaced the sooty gull. Large white California and Western gulls lightened the sky as white-sided dolphins mimicked them in water. Two vastly different worlds and yet out at sea, save the change in the names of species, the wind, the waves and the creatures that ride them had a certain rhythm that seemed the same. In those moments of riding the waves with them, I have been transported into a magical world that spans three fourths of the Earth.

I have often wondered why we in India cannot take citizenry in to see the magnificence of our seas. The answer may well be that we are a coastal people at best and not masters of the open sea. Many years ago in the Andamans, I had watched a minor storm drive Indian fishing boats and even the coast guard rapidly back to land while intrepid and perhaps illegal fishing boats manned by Burmese and Thai fisher folk still took to the waters. A few nascent operations in Goa and the Malvan have started up in recent years to take the tourist out to sea and I wish they prosper and new ones venture further afield. Perhaps then, in Indian waters, I can see finless porpoise splash in the shallows and great whales breach in the sea. Perhaps then I can watch the delicately flushed roseate terns and wonder like Hemingway’s Old Man: ‘Why did they make birds so delicate and fine as those sea swallows when the ocean can be so cruel?’