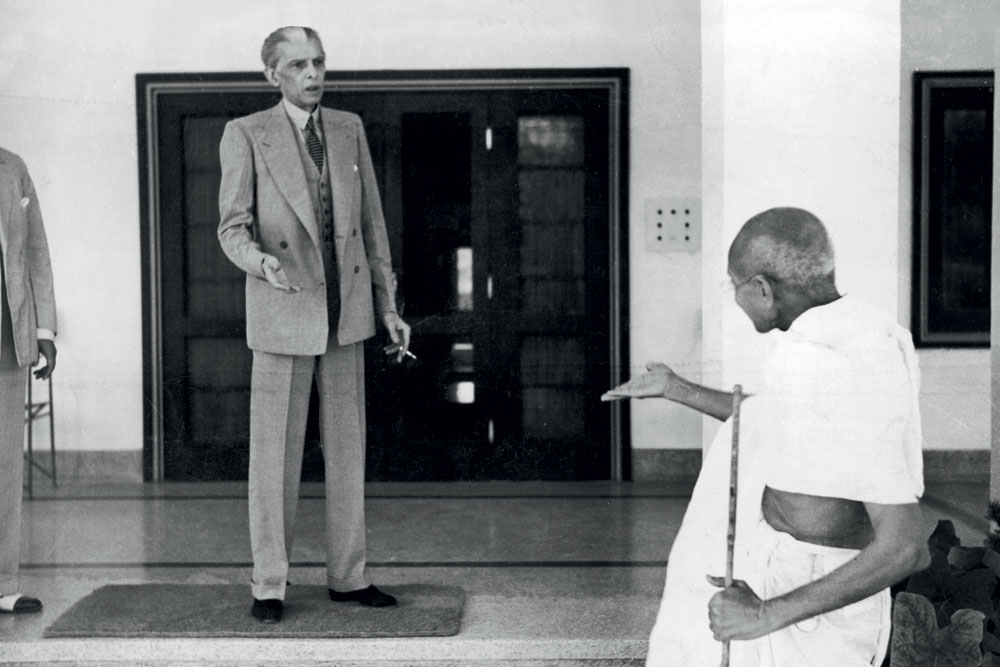 
India’s freedom and its partition happened at the same time. On that fateful midnight of August 14, 1947, not one but two independent nations were born. It was not willed by many, not just the Hindus but Muslims too. Yet, it couldn’t be averted.

Four decades earlier, in 1904, Lord Curzon, then Viceroy of India, announced the partition of the Eastern Indian province of Bengal. It was done on the pretext of administrative convenience, but the real subtext was to create a communal division between Hindus and Muslims. The nationalists understood the colonial mischief. A massive movement was launched against it by the Indian National Congress in 1905. It was primarily led by the Garam Dal (Congress Radicals) leaders like the Lal-Bal-Pal trio—Lala Lajpat Rai from the Panjab, Bal Gangadhar Tilak from Maharashtra and Bipin Chandra Pal from Bengal. The Naram Dal (Congress Moderates) leaders like Dadabhai Naoroji and Gopal Krishna Gokhale were also in support of the cause although they had their reservations over some of the methods of the radicals. In 1911, seven years after Curzon described it as a “settled fact”, the Partition of Bengal was annulled by the visiting King George V. The Vande Mataram Movement, as the Congress movement was called, had succeeded in defeating the British design of creating a Hindu-Muslim divide in India.

One leader, actively involved in the movement, was Muhammad Ali Jinnah. A barrister from London, Jinnah became interested in the freedom struggle and joined the Congress movement in the early 1900s. He worked as secretary to Dadabhai Naoroji. Jinnah strongly opposed the partition plan of Bengal. He even questioned the legitimacy of the Muslim League, which was started by a few Muslim leaders like Aga Khan in 1906 in Dhaka, claiming to be the voice of the Indian Muslims. By 1910, he was championing the cause of “Hindu–Muslim unity”, a new fad of Congress.

Many in Congress were impressed with this young suave Muslim gentleman’s commitment to the national cause. Sarojini Naidu, in her book on Jinnah, quoted Gokhale as saying, “He has true stuff in him and that freedom from all sectarian prejudice will make him the best ambassador of Hindu-Muslim unity”. On his part, Jinnah declared that he wanted to become a “Muslim Gokhale”. Jinnah joined Muslim League in 1913 to pull it away from British patronage and push it closer to Congress of which he was already a member. Membership in both Congress and League was quite common during that period for the Muslims.

Jinnah’s efforts fructified in 1916 when the League leaders agreed to join the annual session of Congress at Lucknow. Tilak was thrilled, and called in exuberance that it was finally “Luck Now at Lucknow”.

But Jinnah’s trajectory started shifting around that time because of the entry of another tall leader, Mohandas Karamchand Gandhi. Gandhi returned to India from South Africa in 1915 and tried his luck at entering Congress. He, too, had close links with Gokhale, which had facilitated his easy entry. Gokhale died later that year.

From that moment onward, Gandhi steadily grew in the Congress organisation. By 1919, he became one of the tall leaders of the independence movement. One reason, of course, was the removal of leaders like Pherozeshah Mehta, Gokhale and Tilak from the scene in quick succession that had paved the way for Gandhi’s unassailable rise. Second, were his unique methods like Ahimsa and Satyagraha—non-violence and truthful resistance.

Both worldviews clashed in the very first meeting in India when the Gujarati Society in Bombay hosted a reception for Gandhi upon his return to India in 1915. The function was presided over by Jinnah. Gandhi spoke in Gujarati. But when Jinnah rose to speak in English, Gandhi interrupted him taunting him to speak in his mother tongue. Jinnah continued in English, ignoring Gandhi’s plea. But that created the first gap between the two, which would end three decades later as an unbridgeable gulf. In 1920, when Gandhi announced the non-cooperation movement together with the ill-conceived Khilafat movement, Jinnah resigned from Congress blaming Gandhi and parted ways for good. When he resurfaced prominently in 1934-35, he was not the same Jinnah.

It is interesting to track the trajectories of these two leaders—Gandhi and Jinnah.

Gandhi began his political innings in India with the slogan of “Hindu-Muslim unity”. He confessed that his experience in South Africa, where he went as a counsel for a rich Muslim merchant and successfully rallied both Muslims and Hindus around him in the fight against the colonists, had encouraged him to achieve the same in India in order to secure independence. Gandhi concluded initially that without Hindu-Muslim unity, there could be no freedom.

It became an obsession with Gandhi. Khilafat, the hybrid language of Hindustani, and the truncation of the Vande Mataram song were all the result of this obsession with Hindu-Muslim unity. In the process, independence became a matter of bargain between Congress and the Muslim League at one level and the British and the League at another. The League would go with the highest bidder.

The galore of compromises to win over the Muslim League to the Congress side, that went on for two decades, did not succeed. Finally, the League passed a resolution in 1940 at its Lahore session, demanding “separate states” for Muslims in India. It became popular as the Pakistan Resolution later in history, although the word Pakistan was not used in that resolution. But the appeasement and compromise that the Congress leadership had indulged in had resulted in the League slowly emerging as the sole representative of the Muslims in the country and Jinnah its “sole spokesman”, as Ayesha Jalal put it.

The Lahore Declaration of the League demanding Pakistan had rattled Gandhi. He realised that his obsession with “No freedom without Hindu-Muslim unity” was leading the country on a downward slide toward Partition. In 1934, when he went to meet Savarkar at Ratnagiri, Savarkar had warned him about the same, and suggested that Gandhi should tell the League: “If you come, with you; if you do not, without you; if you oppose, in spite of you”. But Gandhi told Savarkar that there was no need to be so harsh. Nine years later, Gandhi seemed to have agreed with Savarkar when he declared at the Quit India session at Bombay in 1943 that the freedom and unity of the country cannot wait for the noble cause of Hindu-Muslim unity. Of course, it was too late by then.

Jinnah journeyed just in the opposite direction. Someone who opposed even separate electorates in 1908, although got elected in 1910 from one of the Muslim seats in Bombay, someone who worked tirelessly for Hindu-Muslim unity until 1916, became the champion of Muslim politics in 1936. “Muslims in danger” became his slogan. He gave up his Western attire and started donning the sherwani in October 1936. From “Hindu-Muslim unity”, he flipped his slogan to “Hindus and Muslims cannot live together”. Finally, Gokhale’s “best Hindu-Muslim ambassador” became the worst harbinger of Hindu-Muslim animosity resulting in the communal division of India.

There are a couple of unusual similarities also between the two leaders—Gandhi and Jinnah. Both were called the fathers of their respective nations. Subhas Chandra Bose called Gandhi one in 1944 when he greeted him on his birthday, October 2. Jinnah was given the title after the creation of Pakistan. But both failed to produce what they really intended.

Jinnah wanted a much bigger Pakistan. He called the “June 3 Plan” that proposed the division of Bengal and Punjab as “Moth-eaten Pakistan”. He was hoping to have the entire Bengal, including Calcutta, entire Panjab and Kashmir, where he started purchasing houses and houseboats too, as part of Pakistan, besides Sindh and the North West Frontier Province. He was unhappy and unwilling to accept until Winston Churchill (leader in opposition at that time) and Lord Mountbatten warned him that it was the best that he could get.

Gandhi wanted a united India. “Vivisection me before vivisecting India”, he declared when he was informed about the Lahore Resolution of the Muslim League. His last few years were devoted to ensuring India’s unity at all costs. He went to the extent of offering the whole of India to Jinnah. Mountbatten was surprised at Gandhi’s proposal and asked him what would be the likely response of Jinnah. Gandhi wryly predicted that Jinnah would say, “Ah, it is the wily Gandhi again”. Jinnah did not have to. Luckily, Nehru and Patel abhorred the idea and rejected it. In any case, they stopped listening to Gandhi after he unilaterally initiated a dialogue with Jinnah in 1944 without consulting them. They were in jail at that time and Gandhi’s dialogue went on for 18 days ending in futility when Jinnah announced to the media that it had failed.

Gandhi had failed to convince Jinnah from dividing India. He had also failed to convince his own people in Congress from agreeing to divide India. He went away to Bengal as a dejected man when the nation was celebrating Independence on August 14-15, refusing to return despite appeals from Nehru and Mountbatten.

“My life’s work seems to be over. I hope God will spare me further humiliation,” he bemoaned, pleading in agony, adding, “I shall perhaps not be alive to witness it, but should the evil I apprehended overtake India and her independence be imperilled, let posterity know what agony this old soul went through thinking of it. Let it not be said that Gandhi was a party to India’s vivisection.”

Postscript: In his maiden speech to the Pakistan Constituent Assembly, Jinnah declared that he would like Pakistan to become a secular nation with the minorities enjoying all the rights. He died soon after and Pakistan travelled in the opposite direction, becoming an Islamic Republic. Jinnah succeeded in partitioning India but failed in creating the nation that he wanted. Jinnah did not have it in him to build a nation.

Gandhi, on the other hand, wanted a nation that would treat everyone equally. He called it Ram Rajya, in which “the weakest shall have as much power as the strongest.” Gandhi, too, died early, falling victim to bigotry.

Where Jinnah failed, could Gandhi have succeeded in building a nation where everyone, Hindus, Muslims and all others, would live like one nation?