A hundred years since its foundation, CPC’s ambitions threaten to jeopardise democracies the world over 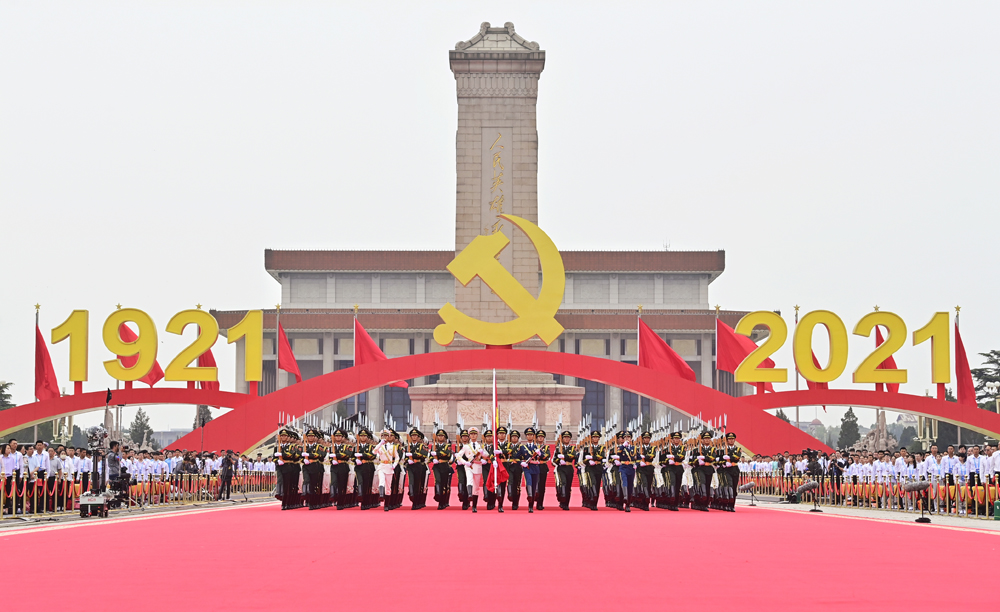 
Four years after the so-called Third Reich was founded, Adolf Hitler delivered a long victory speech before the German Reichstag on January 30, 1937. He attributed the success of the National Socialist movement to his own leadership, which was ascribed to him by none other than the “Almighty God”. He claimed that he was able to successfully bear the burden because of his “trust that He who is above us all sanctions my work.” He then thanked “all those men and women who have assisted in building up our party organisations.” Then came the critical praise for “the chiefs of our armed forces.” “The Party and the defence forces are now the guarantors sworn to devote themselves to the preservation of our national existence,” Hitler declared. A “divine” leader, an all-powerful party and a devout army were Hitler’s National Socialist charter.

More than eight decades later, the echoes of that charter were heard on July 1st, 2021, at the Tiananmen Square in Beijing. This time it was the Chinese Socialist charter pronounced by President Xi Jinping. Addressing an impressive centenary celebration, Xi declared that the Communist Party was the foundation for the success of China. The Party was “chosen by history” and the Party leadership was the “defining feature of socialism with Chinese characteristics,” he insisted.  “We must uphold the core position of the General Secretary on the Party Central Committee,” he exhorted the people.

Authoritarians know the power of the gun. Like Hitler, Xi too argued that a loyal army, not a professional one, was an important component of “our military strategy for the new era.” “We will maintain the Party’s absolute leadership over the people’s armed forces. We will take comprehensive measures to enhance the political loyalty of the armed forces,” Xi asserted. A “defining” leader, “chosen” Party, and “politically loyal” armed forces were “core leader” Xi’s Chinese socialist charter. “Geniuses think alike, but fools seldom differ”, goes an adage. Authoritarians, too, think alike and seldom differ.

Hitler was the envy of the world leaders of his times. He was on the cover of magazines like TIME. Journalists from France to America were praising him for “punctuality” of trains or the “smart blue uniforms” of the police or the “well-regulated traffic” on Berlin streets. For Franklin Delano Roosevelt, the American president, it was “business as usual” with Hitler through the decade of the 1930s. Roosevelt said nothing when Hitler sent 20,000 troops into Rhineland in 1936 and applauded the Munich Agreement, under which western Czechoslovakia was handed over to the Nazis in 1938. He not only refused to criticise the Hitler government’s intensified anti-Jewish persecution in Germany in the 1930s, but personally removed critical references to Hitler from the speeches of his Interior Secretary Harold Ickes.

Xi Jinping, too, is the envy of many leaders in the world today. He is the undisputed king of a dazzling China, which has emerged as a global economic and military superpower, next only to America. Although critical on issues, many leaders privately admire with awe the stupendous rise of China under Xi and wouldn’t mind a warm handshake with him. More and more leaders seem to buy the Communist Party of China’s (CPC) propaganda about the “efficiency of authoritarianism” as against the “chaos of democracy.” At least, that was the central message that Xi and the CPC wanted to convey through the high-voltage centenary celebrations, that while one-party politics in China has delivered to its people a “Xiaokang society”—“We have realised the first centenary goal of building a moderately prosperous society in all respects,” as Xi put it—the democratic world is struggling with racism, poverty and chaotic politics.

Niall Ferguson, the New York Times columnist and Stanford scholar, calls it the osmosis effect. In Norman Mailer’s World War II novel The Naked and the Dead, the fascist American general declares: “There is osmosis in war. Call it what you will, but the victors always tend to assume the trappings of the loser.” Something of that sort is happening in the world today. Those who abhor Xi, too, seem to be emulating him. The already fragile democracies are increasingly coming under the trappings of the Chinese model. Authoritarianism is on the rise in the democratic world. As Ferguson rued in his LA Times column, “We become them, they become us.” It is this dangerous threat that the democratic world faces from the osmosis of China. Great liberal values that people in democracies cherished, like multi-party democratic polity, federalism, free markets, open societies, individual freedoms and free media are today being eroded slowly.

All this in the name of democracy only. For that matter, from Hitler to Xi, all authoritarians have always cleverly couched their intentions and actions in a democratic idiom. “Is there a truer form of democracy than this National Socialism?”, Hitler asked the members of Reichstag in 1937, pretending innocence. In his CPC centenary address, Xi referred to democracy with a straight face at least half-a-dozen times and attributed China’s rise to the “victory of the new democratic revolution.”

Leaders in democracies continue their lip service to democracy, but many crave for absolute powers to perpetuate their rule. Opposition is sought to be decimated, individual freedoms curbed, media gagged and markets manipulated, all in the name of “realising national rejuvenation,” to borrow a phrase from Xi’s vocabulary. Hitler had equated the Nazi party with the German race; Xi equates CPC with the Chinese nation; similar trends are discernible in the democratic world too. The single-party Nazi dictatorship had resulted in the deaths of nearly 80 million people in World War II. Soviet Communist leader Stalin’s purges and gulags had caused the death of tens of millions. “Who killed more: Hitler or Stalin?”, asked American historian Timothy Snyder provocatively. But the real winner should be the CPC under Mao in the past, and under Xi now. Mao’s regime of 27 years alone had witnessed deaths of more than 60 million Chinese people.

Centralisation of power was the way of the authoritarians. Increasingly, under the osmosis effect, democracies too are turning to concentration of more and more powers in the hands of governments. Authoritarians used the economy to create a “dependent” society. The economic strife caused by the pandemic has provided an opportunity to the leaders in several democracies to resort to the same model today. Joe Biden, the most bitter critic of Xi, resorted to the very “Chinese” conception when he announced a slew of welfare plans—the $1.9 trillion American Covid Rescue Plan, the $2.2 trillion American Jobs Plan and the $1.8 trillion American Families Plan.

Can the leaders of the democratic world resist the temptation of aping the ostensibly successful “Xi model” while continuing with their unctuousness for democracy? Or will the osmosis of China take all the cherished democracies down the authoritarian road? This is the challenge that Xi’s centenarian CPC throws at us.