The Carer and the Slayer

Shiva is equally fierce in love and rage 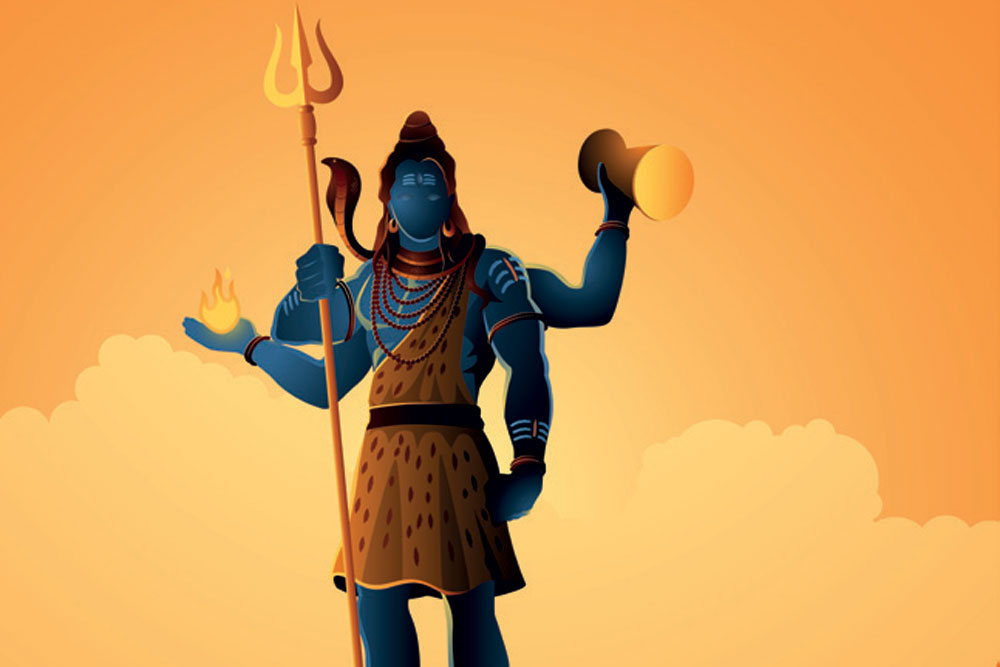 
IN THAT FAMOUS shloka about jyotirlingams, Somanatha is the first and I mentioned the Somanatha story in the last column. The next one is Mallikarjuna, in Shrishaila. Hence, here is the Mallikarjuna story, from the Shiva Purana, as told by Suta.

Suta said, “After this, I will speak about how Mallikarjuna originated. If a person hears this, he becomes devoted and intelligent and is freed from all sins. I have already told you about Kumara’s divine conduct, but I will describe it again. It destroys all sins. Kumara, Shivaa’s [I will use Shivaa for Parvati] son and Taraka’s immensely strong enemy, circumambulated the earth and returned to Kailasa. The divine rishi, Narada, came there and told him everything about Ganeshvara’s marriage. His mind was in a whirl. [His younger brother was getting married before him.] Hearing this, Kumara prostrated himself before his parents. Though his parents tried to restrain him, he went to Mount Krouncha. Separated from Kumara, his mother, Girija, was miserable. However, Shambhu spoke to her and made her understand. “O beloved! O Parvati! Who are you grieving? O one with the excellent eyebrows! Your son will return. Give up this terrible sorrow.” But suffering from great grief, Parvati did not pay any attention to this. Therefore, Shankara sent the gods and rishis. All the devas and rishis went cheerfully, along with their followers. Excellent in intelligence, they went there to bring back Kumara. All of them went there and prostrated themselves before Kumara. They lovingly prayed to him and tried many kinds of ways to make him understand. However, Kumara was overwhelmed by great ahamkara. He did not pay heed to the prayers of devas, or to the command of Shiva, the guru of his lineage. At this, all of them returned to Shiva’s presence. Having bowed down before Shankara and taken their leave from him, they returned to their own respective abodes. Devi Girija suffered from great grief on account of separation from her son, since he did not return, and so did Shambhu. Following the customary practices of the world, they were dejected and extremely miserable. As a result of their love, they went to the place where their son was. The son named Kumara disregarded the affection showed by his parents. Knowing that they had come and feeling no love for them, he left that mountain and went three yojanas away. Their son went far away from Mount Krouncha. But they remained there, in forms full of energy. Out of affection towards their son, Shiva and Shivaa go there on every parva day. They go there to see their own son, Kumara. Shiva himself goes there on amavasya and Parvati certainly goes there on the day of purnima. That is the day when Shiva’s lingam of Mallikarjuna originated. It is famous in the three worlds. If a person sees that lingam, there is no doubt that all his sins are destroyed and he obtains everything that he desires. His miseries go far away and he obtains great happiness. He does not suffer the distress of a mother’s womb again. He obtains wealth, grain, prosperity, fame and freedom from disease. There is no doubt that he is successful in obtaining his desired fruits. I have spoken about the second jyotirlingam, known as Mallikarjuna. For the sake of the worlds, it is said that if one sees it, one obtains every kind of happiness.”


The Brāhmanas who always placed their trust in Shankara, said, ‘who is capable of acting against Shiva? The Lord Shiva will protect us from fear resulting as a result of the asuras. There is no other refuge in the world. Shiva is affectionate towards his devotees’

We now move on to one of the more famous jyotirlingams, Mahakala, in Ujjayini. That story will take more than one column.

Suta replied, “O Brāhmanas! The city of Avanti [another name for Ujjayini] is beautiful and bestows emancipation on all living beings. It is extremely sacred and is loved by Shiva. It purifies the worlds. There was a foremost Brāhmana there, engaged in auspicious deeds. He always studied the Vedas and performed rites from the Vedas. He maintained the sacrificial fire and always worshipped Shiva. Every day, the Brāhmana worshipped a parthiva image. The Brāhmana, Vedapriya, obtained the fruits of all the rites. He became accomplished in proper jñana, the destination obtained by the virtuous. He had four sons who were just like him. They were constantly devoted to worshipping Shiva and were not inferior to their father. Devapriya was the eldest and the next was Priyamedha. The third was named Sukrita. The fourth was Dharmavahi, excellent in vows. As a consequence of the power of their good merits, happiness increased on earth, just as the moon constantly waxes during shukla paksha. Their good qualities flourished and brought happiness. The city became full of the energy of the brahman.”

“On Mount Ratnamala, there was a great asura named Dushana. The king of daityas was powerful and he constantly harmed the cause of dharma. Thanks to a boon obtained from Brahma, he regarded the world as insignificant. He defeated devas and ousted them from their positions. Like a lion destroying hares, the wicked one shattered the dharma of the Vedas and the dharma of the smriti texts everywhere on earth. “However, it can still be seen in that solitary and beautiful city of Avanti.”

Thinking this, listen to what he did. Dushana, the great asura, surrounded himself with many soldiers. He went there, intending to destroy all the Brāhmanas who were there. Having reached, the Indra among the daityas summoned for excellent daityas. The immensely crooked one, who hated Brāhmanas, addressed them in these words. The daitya said, “Why don’t the wicked Brāhmanas act in accordance with my words? It is my view that all those who follow the dharma of the Vedas must be punished. I have defeated all the devas and kings in the world. Are we incapable of bringing Brāhmanas under our control? If they wish to remain alive and obtain a share in happiness, let them give up Shiva’s dharma and the supreme dharma of the Vedas. Otherwise, there will be a doubt about their remaining alive.” When this was decided, the four daityas surrounded the city from four directions, resembling fires that arise at the time of dissolution. The Brāhmanas heard about the attempts made by daityas. However, devoted to performing dhyana on Shiva, they were not saddened at all. The Brāhmanas resorted to their fortitude and did not deviate the least bit from their supreme dhyana. If Shiva is in front, who can suffer? Meanwhile, that auspicious city was overwhelmed. The suffering people went and sought refuge with the Brāhmanas. The people exclaimed, “What is to be done? The wicked ones have arrived. They have caused violence to many people and are approaching close.” Hearing their words, the Brāhmanas who were the sons of Vedapriya and who always placed their trust in Shankara, replied, “We do not possess an army that can cause fear to the wicked. We do not have weapons we can use to drive them back. This general dishonour also reflects on the one who is our refuge. Who is capable of acting against Shiva? The lord Shiva will protect us from fear resulting as a result of the asuras. There is no other refuge in the world. Shiva is affectionate towards his devotees.” They worshipped the parthiva lingam. Having done this, the Brāhmanas immersed themselves in dhyana.”

“The daitya and his soldiers saw the Brāhmanas. Dushana said, “Kill them. Bind them.” However, the Brāhmanas who were the sons of Devapriya were devoted to the path of performing dhyana on Shambhu. They did not hear the words uttered by the daitya. The evil-souled one wished to kill the Brāhmanas. But before he could do so, the place where the parthiva lingam was placed sank into a pit, making a loud sound. Shiva arose from within that pit, assuming a hideous form. He became famous as Mahakala, the one who slays the wicked and is the destination of the virtuous. He said, “I am Mahakala, who rises against wicked ones like you. O crooked one! Leave. Go far away from these Brāhmanas.”

Saying this, Mahakala Shankara uttered the sound of humkara and instantly reduced Dushana and his army to ashes. Some soldiers were killed. Some other soldiers ran away. Dushana was killed by Shiva, the paramatman. Darkness is completely destroyed when it sees the sun. Like that, on seeing Shiva, the soldiers were destroyed. The drums of devas were sounded and flowers were showered down. All the devas, Hari, Brahma and the others, assembled. They devotedly prostrated themselves before the divinity Shankara, who brings welfare to the worlds. They joined their hands in salutation and praised him with many kinds of hymns. Pleased, Shiva himself comforted the Brāhmanas. Mahakala Maheshvara said, “Ask for a boon.” Hearing this, all the Brāhmanas joined their hands in salutation.

Full of devotion towards Shiva, they prostrated themselves, lowered their heads and spoke. The Brāhmanas said, “O Mahakala! O Mahadeva! O chastiser of the wicked! O Shambhu! O Shiva! Please grant us liberation from this ocean of samsara. For the protection of the world, please remain established here. Always save those who see you.” Thus addressed, Shiva remained in that beautiful pit, so that he might save devotees and grant them a virtuous destination. The Brāhmanas obtained emancipation. From his form as a lingam, Shiva’s region extends for one krosha in each of the four directions. Under the name of Mahakaleshvara, Shiva is famous in the world.”