How maya clouded a king’s judgement 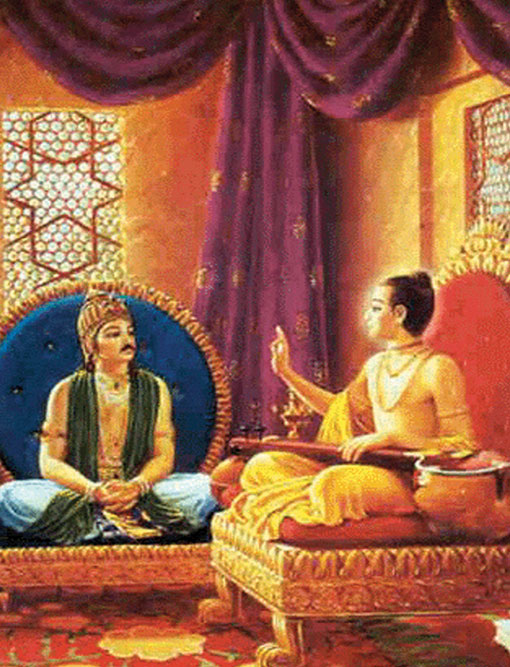 LET ME CONCLUDE the Puranjana story. This column should be read as a sequel to the two previous ones.

There was a king of the gandharvas and his name was Chandavega. This powerful one had an army consisting of 360 gandharvas. There were a similar number of gandharva women with them. Some were dark and some were light. (Let me repeat. This entire story is an allegory. The gandharvas stand for days. The gandharva women stand for nights, the fair ones for shukla paksha and the dark ones for krishna paksha.) Together, they surrounded the city and plundered everything. When Chandavega’s followers started to plunder Puranjana’s city, the large serpent tried to counter them. The powerful protector of Puranjana’s city fought with the 720 gandharvas for 100 years. However, his friend was fighting singlehandedly with many and his strength decayed. At this, his kingdom, city and relatives were afflicted and filled with great anxiety.

Kala had a daughter. (The daughter of Kala, or Time, is meant to signify old age.) Because of her misfortune, she was known in all the worlds as Durbhaga (the unfortunate one). Her husband was Bhaya (fear). Bhaya’s soldiers were the agents of destiny. Bhaya and Kala attacked Puranjana’s , city. It was full of objects of pleasure and was guarded by the serpent who had turned old. With her force, Kala’s daughter took over Puranjana’s city. Whichever man was overpowered by her instantly lost his powers. Unwillingly, the king decided to abandon the city. The time for separation from his wife arrived and he was miserable. He thought, ‘When I leave for the next world, my wife will be without a protector. She will grieve over her children. How will she maintain herself? She does not eat until I have eaten. She does not bathe until I have bathed. She is devoted to me. If I am angry, she is extremely scared. When I reprimand her, she is silent. When I do not know, she advises me. When I am not around, she is filled with sorrow. She is the mother of brave sons. How will she sustain the status of a householder? My miserable sons and daughters are dependent on me. When I have left, how will they sustain themselves?’ Bhaya approached and seized him. The serpent, which had also been obstructed, abandoned the city and departed. After this, the city was broken down and became one with nature.

Puranjani’s (Puranjana’s wife) thoughts had been fixed in his mind. Therefore, thereafter, he was born in Vidarbha in Rajasimha’s house, as a beautiful woman. As the princess of Vidarbha, she married Malayadhvaja, the king of Pandya. In due course, they had sons and daughters. Eventually, Malayadhvaja retired to the forest to perform austerities, accompanied by his wife, the princess. When Malayadhvaja died, she wept loudly. In this state of distress, she met Puranjana’s friend Avijnata, who had been reborn as a Brahmana. The Brahmana said, ‘Who are you? Who do you belong to? You are grieving over the one who is lying down here. Who is he? Don’t you recognise me as a friend with whom you used to wander around earlier? Can you remember your friend Avijnata? You wished to be attached to earthly pleasures. You abandoned me and went in search of that. O noble one! You and I were swans, two friends who resided in Lake Manasa. But for 1,000 years, both of us have been separated from our original residences. O friend! Your mind turned to carnal pleasures. You left me and went to earth. While you were wandering around there, you saw a place that was constructed by a woman. There were five gardens, nine gates, one protector, three chambers, six families and five marketplaces. It was made of the five elements and a woman was the mistress. The gardens are the objects of the five senses. The gates are the nine apertures for the senses. The three chambers are fire, water and earth. The families are the collections of the senses. [Six families for the five senses and the mind.] The marketplaces are the organs of action, where beings transact according to their capacity and nature. The man is truly the lord of all the powers. However, having entered there, he does not comprehend. You were touched by that lady. While you pleasured with her, you forgot all your learning. Because of your association with her, you have been reduced to this wicked state. You are not the daughter of Vidarbha, nor is this brave one your husband. You are not Puranjani’s husband. You have been confined by these nine gates. It is because of the maya created by me that you think of yourself as a man or a virtuous woman. You are neither. Both of us are swans [as a metaphor for pure consciousness]. Behold our true nature. I am you. Behold. You are no different from me. Those who are wise do not detect the slightest bit of difference between us. In a mirror, a man can use his eyes to see one or two. The difference between us is just like that.’ In this way, he realised his own true nature. He regained his memory, lost because of the separation.

You will recall that the Puranjana story was told by the sage Narada. Thus, Narada added some more explanation, to make the allegory clear. Narada said, ‘Know that the being Puranjana creates a city for himself—with one leg, two legs, four legs, many legs or no legs. The friend of the being, described as Avijnata, is his atman. Living beings cannot know him through names, acts or attributes. When a being desires to enjoy all the gunas of Prakriti, he accepts that nine gates, two hands and two feet is the most appropriate form. One should know the maiden as Buddhi, who creates the feeling of ‘I’ and ‘mine’. With that presiding over the body, the being enjoys the qualities of the senses. The male friends are the senses, who ensure knowledge and action, while the female friends are their conduct. The serpent is prana, with its five kinds of flows. One should know the great commander as the mind, the leader of both types of senses. The Panchala kingdom is one where one enjoys the five objects of the senses. In its midst is the city with nine gates: the two eyes, the two nostrils, the two ears, the mouth, the genital organs and the anus. Some of them are in pairs. In association with the respective sense, the breath of life goes out through these. The eyes, the nostrils and the mouth are the five gates towards the east. The right ear is considered as the gate towards the south and the left ear as the gate towards the north. The anus and the genital organs are regarded as the two gates towards the west. In this way, though the atman is a witness, it is made to undertake different kinds of activities. The body is the chariot and the senses are the horses. Though one doesn’t actually move, the number of years is the span of life. Good and bad deeds are the two wheels. The three gunas constitute the standard. The five joints between the yoke and the pole are the five aspects of prana. The mind is the rein, intelligence is the charioteer, the heart is the seat and opposite sentiments are the two poles for the yoke. The five senses are the five kinds of weapons. The seven bumpers are the constituents of the body (rasa or plasma, rakta or blood, mamsa or flesh, meda or fat, asthi or bones, majja or nerve/marrow, and shukra or semen/reproductive tissue). Using the 11 types of soldiers of the senses (adding the mind to the five sense of perception and the five of action), a being rushes after a mirage. The passage of time was symbolised by the year, Chandavega. He commanded the days, in the form of the male gandharvas and the nights in the form of the female gandharvas. There are 360 of each and as they progress, they diminish the lifespan. The daughter of Kala is old age herself and no one welcomes her. In this way, destiny ensures that a being who is born suffers from many kinds of miseries for 100 years. In the body, the jivatman is enveloped in darkness. It is nirguna, but the attributes of prana, the senses and the mind are imposed on the atman. It lies down in this bondage of desire and performs acts according to ‘I’ and ‘mine’. Pursuing desire, a being travels on the superior path or the inferior path. Depending on destiny, he experiences pleasure or pain.’

I think this is a beautiful allegory. There is much more detail in the actual Puranjana story in Bhagavata Purana. For the sake of reducing it to a column, I have compressed some of it.