The Aesthetics of Indian Politics III 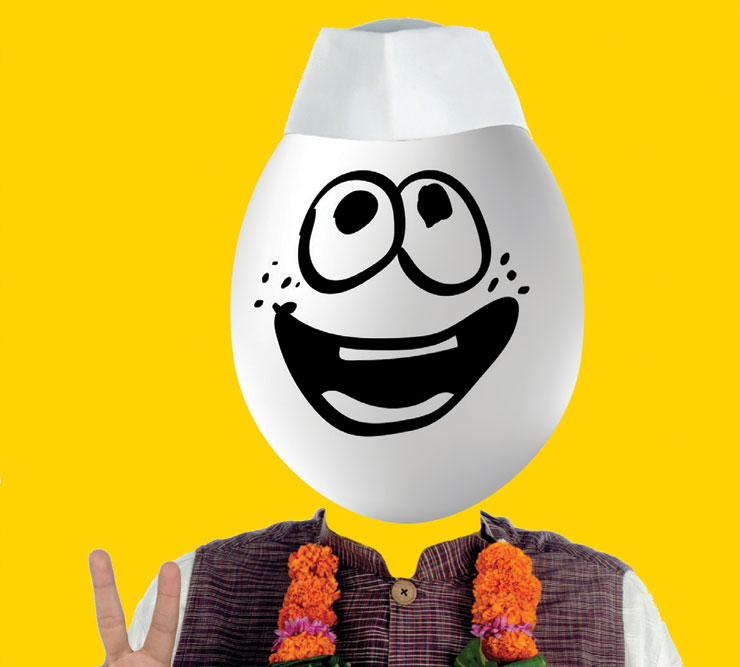 
IN NATYASASTRA, THE extraordinary treatise on Indian dramaturgy and performance, Bharata famously says, “there is no natya or performance, without rasa.” As Adya Rangacharya translates this crucial portion of the text: “Rasa is the cumulative result of vibhava [stimulus], anubhava [involuntary reaction], and vyabhicari bhava [voluntary reaction]” (New Delhi: Munshiram Manoharlal, 1996, p 54-55).

Bharata leaves us with no doubt that rasa, or relish, although developed in the Natyasastra as a theory of aesthetics, owes its origin to that part of our sensory apparatus that relates to eating and tasting. Our tastebuds are stimulated when an edible substance enters the mouth.

The oral cavity is loaded with receptors that respond to food. Along with olfactory stimulation whereby we savour its smells and aromas, the trigeminal neuralgia or cranial nerves are activated to gauge the texture and temperature of what we eat. In addition, the tongue and epiglottis play a crucial role in conveying information to the gustatory cortex, which produces our perception of taste.

Rasa, in other words, signifies an aesthetics which is remarkably gustative. Bharata makes this amply clear: “just as when various condiments and sauces and herbs and other materials are mixed, a taste is experienced, or when the mixing of materials like molasses with other materials produces six kinds of taste, so also with the different bhavas [emotions] the sthayi bhava [permanent emotions experienced “inside”] becomes a rasa” (ibid).

But, asks Bharata, why is the resultant flavour called rasa? “Because,” he answers, “it is enjoyably tasted, it is called rasa. How does the enjoyment come? Persons who eat prepared food mixed with different condiments and sauces, if they are sensitive, enjoy the different tastes and then feel pleasure; likewise, sensitive spectators, after enjoying the various emotions expressed by the actors through words, gestures and feelings, experience pleasure. This feeling by the spectators is here explained as the rasa of natya” (ibid).

Typical of his method, Bharata does not rest with merely defining or describing what he means by rasa. He adds the exquisite, one might add delicious, prerequisite that it must be actually savoured rather than merely conceptualised. Rasa is experiential, not intellectual. Instead of remaining cerebral, it must be tastefully celebrated.

As Richard Schechner explains in his classic exposition of “Rasaesthetics,” the location of Indian theatricality is “the snout-to-belly-to-bowel.” It is our enteric nervous system or “gut brain” or “brain in the belly” which Indian aesthetics emphasises: “Rasa is flavour, taste, the sensation one gets when food is perceived, brought within reach, touched, taken into the mouth, chewed, mixed, savoured and swallowed. The eyes and ears perceive the food on its way—the presentation of the dishes, the sizzling. At the same time, or very shortly after, the nose gets involved. The mouth waters in anticipation. Smell and taste dissolve into each other… Rasa is sensuous, proximate, experiential” (The Drama Review 45.3 Fall 2001, p 29).

What makes India’s Rasaesthetics unique is that it is unlike the Greek “theatron, the rationally ordered, analytically distanced panoptic” (ibid p 29), which relies on the visual rather than the gustatorial. Schechner argues that Western theatre, indeed epistemology, is tightly bound with seeing and gazing and thus characterised by a singular specularity. Knowing, in the Western knowledge tradition, is literally seeing: “The word ‘theatre’ is cognate with ‘theorem,’ ‘theory,’ ‘theorist,’ and such, all from the Greek theatron, itself from thea, ‘a sight’; and from theasthai, ‘to view’” (ibid p 30). No wonder, in such a tradition, the highest form of truth is revelation.

Seeing versus tasting—this is how this epistemic difference may be summed up. The former requires distance from the object of observation. Hence the microscope and telescope, television and internet. Rasa, on the other hand, demands not just proximity, but absorption. To put it dramatically, Western knowledge is theory, Indian knowledge is experience: “A single net holds Plato’s allegory, Galileo’s observations, the Hubble Space Telescope, electron microscopes and the super-colliding superconductor particle accelerator” (ibid).

As in drama, so in real life. The dictum, “there is no natya or performance without rasa” is as true of Indian politics as it is of theatre. There is no politics in India without rasa or relish. We Indians are so politics-obsessed because it is full of rasa, the savour and sap of life in all its colours and shades. The daily drama of Indian politics overshadows all other man-made performances available to us.


We can always laugh at our politicians. Unfortunately, lately, we have had a sharp reduction of hilarity in the public sphere. Members of our political class have become a dread and intolerant lot, targeting comedians and cartoonists as much as they do professional and party rivals

Politics in India pervades all spheres of our lives. It dominates real life as well as reel life. Sport, cinema, academia, administration, agriculture, industry, economics, food, family, fun—everything is politically charged and driven. Factions, intrigue, ideology in nearly all areas of our lives make us, at least in the eyes of some of our critics, a dirty democracy, messy, chaotic, and bad.

But, hey, why should we take ourselves so seriously? We have the hasya rasa, the power of mirth, to resort to. We can always laugh at our politicians. Unfortunately, lately, we have had a sharp reduction of hilarity in the public sphere. Members of our political class have become a dread and intolerant lot, targeting comedians and cartoonists as much as they do professional and party rivals. Those who lampoon or satirise our leaders run the risk of being driven out of jobs or patronage, even, in extreme cases, being thrown into jail on a variety of charges, including sedition.

This was not always the case. Even the redoubtable and formidable founder-supremo of Shiv Sena, the late Bal Thackeray, was a brilliant, if acerbic, cartoonist. But try to poke fun at his successors and you may end up with a targeted troll attack, if not a bloody nose. The same is also true for those who risk caricaturing or mocking other leaders of the day, regardless of their political party and region. Of course, what goes by the name of humour these days can also be ugly, vicious and vituperative. It has little to offer by way of amusement, let alone laughter.

There is no one like Raj Narain in Indian politics today. Lalu Prasad, who used to provide many a lighter moment in his heyday, sounds dead serious in addition to slow and dreary these days. Gone is the twinkle in his eye or the pizzaz of his repartee. Even Navjot Singh Sidhu, who became a funny man on TV thanks to Kapil Sharma’s comedy shows, is no longer seen cracking jokes on or off camera. Many others, such as Rahul Gandhi, Arvind Kejriwal and Mamata Banerjee, are more often than not, the butt rather than the contrivers of jokes.

Prime Minister Narendra Modi has a great sense of humour, but he seems to have lost it during the coronavirus pandemic. He looks forbidding and stern most of the time. Vice-President M Venkaiah Naidu, who has a way with words, both in Telugu and English, doesn’t get to exercise it often, given the dignity of his office. Shashi Tharoor can be extremely witty, although only in English, but his sense of humour seems somewhat curbed too.

Perhaps, an exception is the Bharatiya Janata Party (BJP) spokesman Sambit Patra. A medical doctor, he has taken to TV debates—which are little more than raucous shouting matches—like a duck to water. With unflappable wit, he often comes up with just the curious or cunning turn of phrase to defuse the tension, if not the noise. Behind him on the mantelpiece, for those who haven’t noticed, are the BJP lotus symbol to the viewers’ right, a small Jagannath figurine without Subhadra or Balabhadra (Balaram) in the centre and, to our left, a funny-looking Modi doll, or should I say dummy. It serves to remind us that what we are witnessing is a daily tamasha, not to be taken too earnestly.

In traditional societies, every king had a clown to keep him sane, balanced and down to earth. It was a special role, requiring great vim, wisdom and responsibility. The vidushak in Sanskrit drama was both wiseman and fool at the same time. Shakespeare’s clowns were figures of power, mystery, even sacrifice and tragedy.

The degraded world of modern politics abounds in chamchas or sycophants. Sadly, it is also marked by the absence of the vidushak, the genuine purveyor of both humour and unpleasant truths to power. Even the contemporary clown in Hollywood, as in the Batman series, has turned into a sociopath.

But without hasya or the rasa of laughter, Indian politics may risk becoming a grim and deadly business. Both its actors and the spectators must not let this happen..