The aesthetics of Indian politics IX 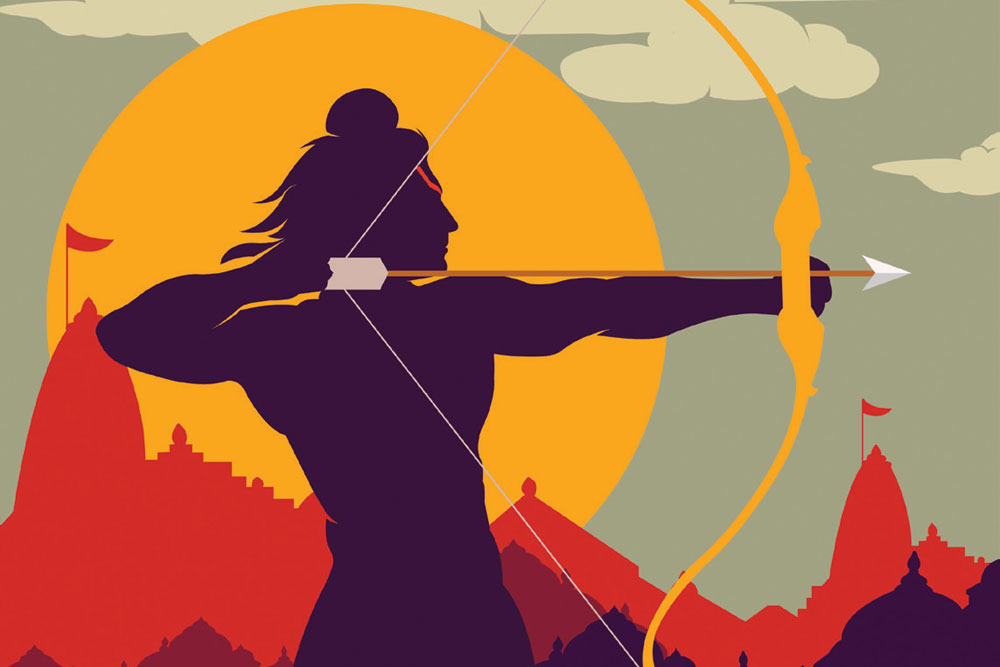 
IF WE SHIFT our attention from Krishna to Rama, the site of bhakti rasa or devotional relish must also shift from Vraj not only to Ayodhya, but also to Orchha. Orchha, nestling on the northern border of Madhya Pradesh, is one of the best-preserved medieval towns in India. Alas, in the name of modernity and development, not to mention devotion, its untouched beauty is being severely compromised today. Yet, it holds many a secret, some so valorous and marvellous that they border on the miraculous.

Consider the famous legend of the Rama Raja temple. It is believed that this is the only place where Lord Rama is worshipped as the ruler, that is, a divine king. But “Ramaraj” also refers to Ramarajya, the kingdom of the just and perfect king, where all are happy and taken care of. It was probably in accordance with this belief that the Bundela rulers of Orchha actually vacated this city. They abdicated, so to speak, in favour of Lord Rama, who is, till this date, considered the real ruler of Orchha. There is even an official gun salute to him at the temple. A classic case of the “secular” state compromising with prior religious beliefs?

But the legend runs deeper, intertwining both personal and political concerns of grave import. The tussle between Madhukar Shah Ju Dev (who ruled from 1554 to1592), a Krishna devotee, and his queen Ganesh Kunwari, a Rama devotee, tells us about an even more significant compromise wrought in medieval India between Rama bhakts and Krishna bhakts. If the Vaishnava mahamantra, “Hare Rama, Hare Rama, Rama Rama Hare Hare, Hare Krishna Hare Krishna Krishna Krishna Hare, Hare” includes the names of both these deities, there is a vital reason for this.

Ramcharitmanas or simply Manas (c 1576) by Tulsidas is the most influential devotional and social text of that period. The devotees of Rama in India were very numerous and widespread. Perhaps, that is the reason that his temple in Ayodhya was the first to be demolished by an invading Moghul. But the cult of Krishna was also sweeping across the land. As if to challenge the Ramayanas of Valmiki and Tulsi, the Krishna devotees had raised the Srimat Bhagavatam (or the Bhagavat Purana) to great heights of canonical exaltation and adoration.

The Krishna of the Bhagavatam was, of course, quite different from the great strategist and wily guide of the Pandavas of the Mahabharata. It was only later that the Gaudiyas combined the two, especially the Krishna of the Bhagavad Gita, with their devotional ideal from the Bhagavatam. How, in their newfound fervour for Krishna as the supreme godhead, the Purushottam, were his devotees to deal with the previous avatar of Vishnu, Sri Rama? This was not merely a theological question, but a deeply political and strategic one too.

We might return to the story of Madhukar Shah and his queen Ganesh Kunwari to find a clue. Theirs was a serious domestic quarrel, threatening almost to destroy their marriage. It arose, apparently, out of their loyalties to two different deities, Rama and Krishna, respectively. The manner in which it was resolved might help us understand the bigger Vaishnavite rapprochement in north India that also helped consolidate a Hindu response to the threat of subjugation, even annihilation.

Madhukar Shah, an ardent worshipper of Lord Krishna in his form as Bankey Bihari, whose temple still exists in Vrindavan, urges his queen to go with him to Vraj to have a darshan of his ishta devata (favourite deity). Perhaps, the biggest reason for this pilgrimage is that the couple badly needs an heir.

But Ganesh Kunwari insists on going to Ayodhya instead, the birthplace of Lord Rama. The king says, “You keep praying to Lord Rama, but what good has that done? Unless you come back with a baby ‘Rama’, don’t bother to return.” The queen takes this seriously, vowing that if she cannot return with little Lord Rama to Orchha, she will drown herself in the Sarayu, the river that runs by Ayodhya.

Walking on foot, the Rani reaches Ayodhya. Fasting and praying for a month, performing austerities on the banks of the Sarayu, she is still unable to see Lord Rama. In great sorrow, bordering on desperation, she plunges into the river, deciding to drown herself. That is when the Lord appears to her in the form of a little boy, just as she wished.

She carries him all the way back to Orchha, returning in 1575, on foot, after eight months and 27 days. She requests him to rest in the Sheesh Mahal palace, awaiting the completion of the magnificent Chaturbhuj temple in his honour. But when the temple is completed, the Lord refuses to move. He reminds her of her promise that she will not shift him once she set him down.

Ayodhya, even after the destruction of the temple by Babar’s general, Mir Baqi, in 1528, remained a place of pilgrimage for worshippers of Lord Rama. The link between Orchha and Ayodhya is confirmed in the daily prayers at the Rama Raja temple, which assert that the Lord spends the day in Orchha, but each night returns to Ayodhya. Indeed, the idol at Orchha may actually be from Ayodhya, which is how the queen fulfilled the king’s commandment of returning home only with a child Rama.

After all, one of the most important shrines in Ayodhya is to Rama Lalla, the baby Rama, worshipped in his mythical place of birth. The political aspect of the story is confirmed by the fact that in 1635, Aurangzeb, who was still a teenager, was sent to subdue Orchha by his father, Shah Jahan. Was that why the Chaturbhuj temple remained empty? The sound and light in the palace explains it in terms of another legend in which Aurangzeb’s general is sent to destroy the secret Rama temple which is in the erstwhile Rani’s apartment, but the temple is miraculously saved because the Lord takes the form of the emperor’s sister to ward off the attackers.

Now from legend to history.

In Flight of Deities and Rebirth of Temples: Episodes from Indian History (2019), Meenakshi Jain, the noted medieval historian of India, sheds light on the possible historical significance of the legend. She sites CE Luard’s Eastern States Gazetteer (1907), backing it up with an interview on June 2nd, 2017 with the present head of the Orchha house, also named, by felicitous intention, Madhukar Shah:

“Kunwari Ganesh went to Ayodhya to obtain darshan of Rama and bring back his image. When she failed in her mission, she entered the Saryu River to end her life. Her foot hit something and she called out to members of her entourage. They found an image of Rama as king. It was that image she brought back to Orchha” (p 168).

The image in the river could well have been one of those destroyed and discarded after the destruction of the Ramajanmabhoomi temple. Throughout medieval Indian history, we find such instances of the rescue, retrieval and shifting of sacred images and objects after the vandalisation or demolition of the original structures that housed them.

The domestic quarrel between Madhukar Shah and his queen Ganesh Kunwari was, it would appear, amicably settled. In a similar manner, the Rama bhakts and the Krishna bhakts reached an agreement to worship conjointly these two powerful avatars of Vishnu as the best antidote against the perils and evils of Kali Yuga, the dark age.

Now that a grand temple to Sri Rama is being built in Ayodhya, perhaps, the Lord’s daily commute from Orchha to Ayodhya might be obviated. Even so, his Rama Raja temple in Orchha will remain a great centre of pilgrimage. What is more, the role that Orchha and its rulers played in preserving the memory and legacy of Rama worship will never be forgotten. Is it any wonder that Orchha also means “the hidden one”?