Strange Ways to Break the Chain

Can a two-foot limit to Ganapati idols help prevent the third wave in Mumbai? 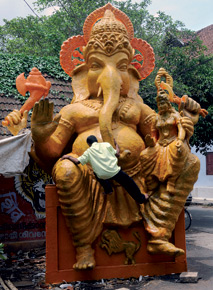 IF YOU WANTED another instance of the whimsicality of lockdown policies, then you got it this week from the Brihanmumbai Municipal Corporation (BMC). Earlier, the Maharashtra government, under whom the BMC comes, had opened local trains in Mumbai for the general public, but with two caveats. Only season tickets, at least for the minimum of a month, would be given. Anyone who had important work for just one day would have to therefore use public buses, which take double the time and are also crowded precisely because trains are restricted. The second caveat was only those who had taken two doses of the vaccine would be given these season tickets. Anyone even cursorily following reports on efficacy of vaccines can tell you that their ability to prevent transmission is very questionable. Such restrictions are aimed at breaking the chain. If there is no effect on the chain, then what is the point of such a rule? But this policy is not only the Maharashtra government’s arbitrariness. More or less, the whole world has decided that in the absence of anything that does stop transmission of the virus, they will insist on vaccines. As it is said, to a man with a hammer every problem is a nail.

But all that is history. This week, the BMC came out with guidelines for how the Ganesh Chaturthi festival must be celebrated. Instead of saying “don’t celebrate in public by putting up pandals”, which would have roused public anger, they took another route—coming out with precise instructions on how the celebrations must be done. Therefore, pandals must have online streaming, no more than 10 people can accompany the idol on its way to the immersion and they must not stop on the way. This was still understandable but they also had rules for those who would get the idols home to celebrate and here it becomes somewhat strange. No household in Mumbai can have a Ganapati idol which is more than two feet tall. For public pandals, it is four feet. As with anything that governments do, there is a logic that makes perfect circular sense in the mind of the bureaucrat coming up with these rules. The most popular pandals are the ones with the biggest idols. Reduce the idol size and the number of people coming will also reduce. Or that if households have only idols that are two feet tall, they might be coaxed into immersing it in a bucket at home, instead of venturing out towards the sea.

But the human mind, especially when it comes to religion, does not exactly follow reason. You can have an empty pandal and there could still be lakhs coming for worship given a sufficiently plausible trigger. And a two-foot tall idol does not reduce the intensity with which a devotee wants to propitiate his god. But the purpose of such diktats, which are more or less unenforceable unless implemented with draconian punishment, is not really to offer a solution. It is to be seen doing something, and mostly to the boss above.