An old guard saves his government 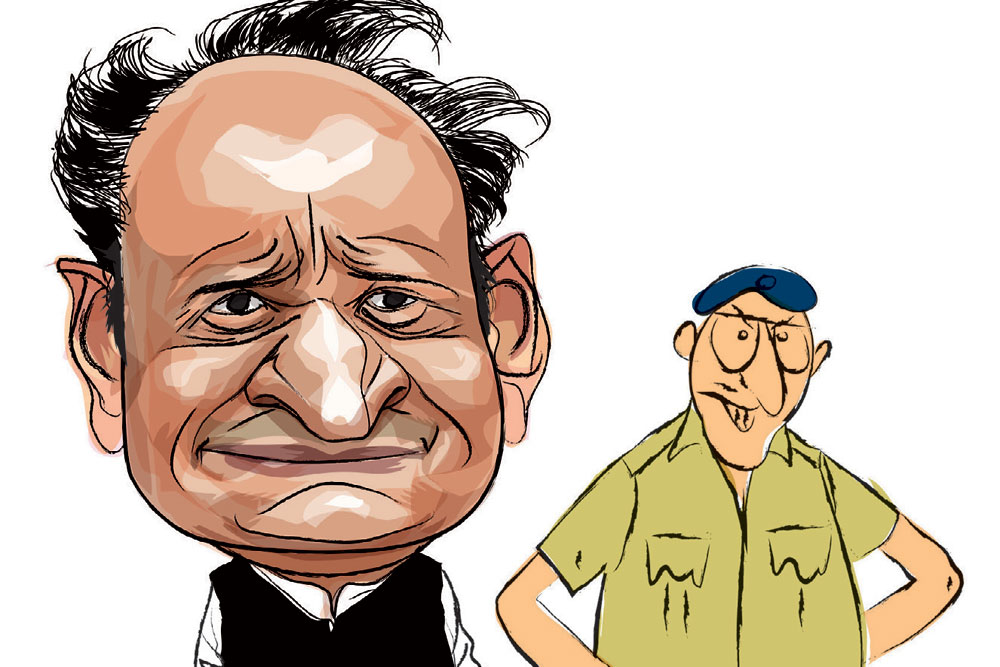 
Rajasthan Chief Minister Ashok Gehlot used his considerable experience as an old guard of the Congress to save his government and outwit Sachin Pilot, for the moment, at least. In this, he was helped by a Special Operations Group helmed by an additional director general of police, Ashok Rathore, an expert in intelligence gathering who is said to have been monitoring Pilot and other dissenters for several months. Rathore’s wife is also an IAS officer who was secretary to former Chief Minister Vasundhara Raje and that connection might also have helped. Raje was not in favour of Pilot joining the BJP because she allegedly sees him as a threat to her chief ministerial aspirations in the next term. Raje predictably denies this and joined party meetings to show her faith in the leadership. But she did not welcome or tweet in favour of Pilot. Delhi, meanwhile, instructed the BJP state president to issue a statement and several BJP leaders, too, said in public they would be happy if Pilot joined their party. Pilot used to frequent Delhi often and was in touch with the BJP. He recently met several Members of Parliament (MPs) in a hotel between Jaipur and Delhi. The Gehlot camp is claiming they have a pendrive where Pilot can be seen talking to them about switching over to the BJP. Gehlot has been briefing Congress president Sonia Gandhi about all this but Pilot has denied the allegations.

After the cabinet expansion, Madhya Pradesh Chief Minister Shivraj Singh Chouhan is on a different mission to fortify his position in the party against Jyotiraditya Scindia, who got most of his former Congressmen ministerships. Recently, a senior Congress leader and Member of Legislative Assembly (MLA), Pradyuman Singh Lodhi, joined the BJP. Interestingly, he is not close to Scindia and it was Chouhan who brought him in. He is also trying to bring in another set of Congress MLAs who were not in the Scindia camp.

In the Congress, Rahul Gandhi is facing a big problem with leaders of his generation, as exemplified by the Sachin Pilot revolt. The party high command is realising that several of these leaders are upset and the BJP is in touch with them. RPN Singh, Jitin Prasada, Milind Deora, Jitendra Singh, Tushar Chaudhary, all form part of this group. Jyotiraditya Scindia, who himself was one of them before going to the BJP, is reportedly actively trying to make them defect too. Another rumour says these leaders are thinking of floating a new party at the national level. Even P Chidambaram’s son Karti recently tweeted: ‘Why is @Google a successful company? Because it lets talent to become entrepreneurial within the organisation. Lessons to be learnt here.’ It is being seen as a message to his party about giving importance to youth leaders now.

In West Bengal, there are whispers about how the BJP is trying to break the Trinamool Congress. Suvendu Adhikari, the young transport minister in the Mamata Banerjee cabinet, may be the prime target. Adhikari is said to be in constant touch with the BJP. He is from Midnapore district where Haldia port is located. The buzz is he is close to an industrialist with interests in ports and also a BJP favourite. Another theory doing the rounds is that Adhikari got a notice from the Enforcement Directorate in connection with an old chit fund scam. Trinamool leaders feel he may join the BJP to get the case diluted. Adhikari has deep pockets and influence over Bengal’s digital media. He is also very popular. The BJP might make him their face to counter Banerjee. Adhikari has, however, told Banerjee not to believe the rumours and that he would always be with her party.

After the standoff with China in Ladakh, the Prime Minister wants to give more importance to neighbours. In Doklam, it was Bhutan that the Chinese were targeting. The recent Nepal experience was not good either. Intelligence reports reportedly say China is active in Bangladesh. Last year, Prime Minister Sheikh Hasina had visited China. Chinese engineers are also constructing a bridge over the river Padma and giving huge financial assistance too. China is also modernising a Bangladeshi port. The Prime Minister’s Office felt there should be a proactive high commissioner. So External Affairs Minister S Jaishankar is sending Vikram Doraiswami, a seasoned Indian Foreign Service officer, to Dhaka. He had been an additional secretary in charge of Bangladesh and Myanmar. A lot of expectation rides on him to keep Dhaka away from Beijing, and on Delhi’s side.

In Karnataka, a corruption scandal related to pandemic management has become an embarrassment for the BJP government. A gang has been found to be selling government beds for Covid patients. Stories in local papers also talk of corruption in the supply of medical kits. Chief Minister BS Yediyurappa is upset with these developments and has asked the health minister for a report. Even the Centre is concerned and the PMO reportedly communicated a message of zero tolerance for such corruption.