The limits of reading it as an independent text 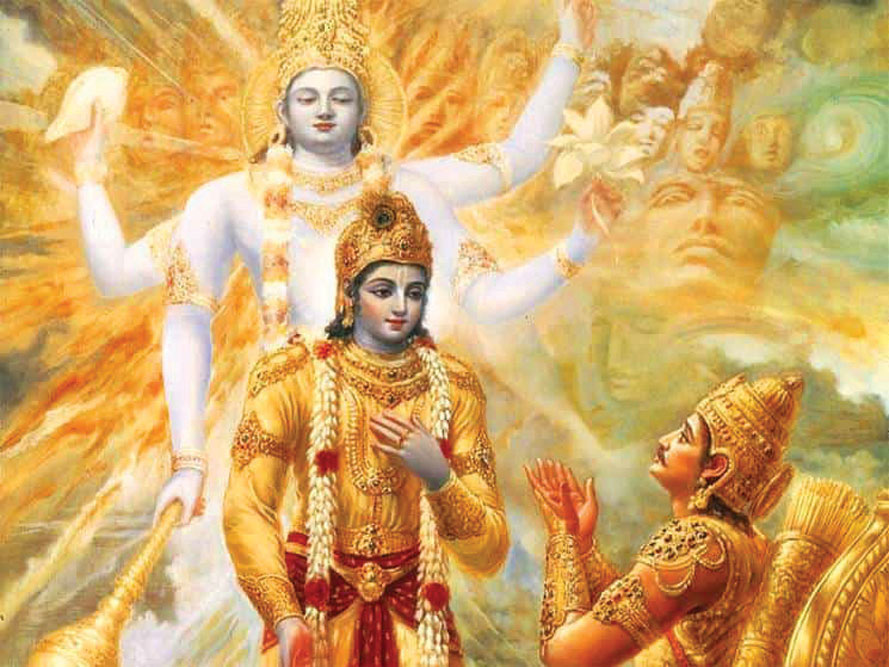 WHAT IS A ‘GITA’? I have been writing about Gitas in the Mahabharata. But whether it is Gitas in the Mahabharata or in other texts, that question can’t be answered satisfactorily. ‘Gita’ simply means something that was sung. It may certainly be the case that the Bhagavat Gita was the first such Gita. It is certainly the case that the Bhagavat Gita is the most important of these Gitas. Nevertheless, one should be aware that there are other such Gitas. There is a website that has Sanskrit documents. It has a listing of such other Gitas and their texts. That lists 55 Gita texts. There are a couple more on the Gita supersite maintained by IIT Kanpur. That means, the Gita corpus has around 60 texts. One might argue that, to be called a Gita, a text has to be explicitly described as a ‘Gita’. There is a problem with this argument. Those descriptions will typically be in the chapter heading, or in the colophon added at the end of a chapter or text. But the vintage of these chapter headings and colophons is later. There is no means of knowing whether they were part of the original text.

Let me stick to the Mahabharata and let me stick to the Critical Edition of the Mahabharata, published by the Bhandarkar Oriental Research Institute (BORI) in Pune. From 1916 to 1966, the BORI sifted through more than 1,200 versions of the Sanskrit Mahabharata and produced what is inferred to be the closest to the original text. This text is known as BORI’s Critical Edition. Nothing can be established with certainty and hence there is subjectivity in inferring. Some critiques have criticised BORI, both on grounds of omission and commission, though more the former. Today, the Mahabharata text is divided into 18 parvas. They are not even in size and their names are 1) ‘Adi Parva’ 2) ‘Sabha Parva’ 3) ‘Aranyaka (Vana) Parva’ 4) ‘Virata Parva’ 5) ‘Udyoga Parva’ 6) ‘Bhishma Parva’ 7) ‘Drona Parva’ 8) ‘Karna Parva’ 9) ‘Shalya Parva’ 10) ‘Souptika Parva’ 11) ‘Stri Parva’ 12) ‘Shanti Parva’ 13) ‘Anushasana Parva’ 14) ‘Ashvamedhika Parva’ 15) ‘Ashramavasika Parva’ 16) ‘Mousala Parva’ 17) ‘Mahaprasthanika Parva’ and 18) ‘Svargarohana Parva’. Most people are familiar with these names. The Mahabharata was composed over a period of time. There was an earlier segment. Let’s call it Mahabharata (O); ‘O’ standing for ‘original’. There was a final text. Let’s call it Mahabharata (F), ‘F’ standing for ‘final’. These things are difficult to date with any precision. Therefore, Mahabharata (O) probably dates to 500 BCE, while Mahabharata (F) probably dates to 500 CE. This is a range of 1,000 years. Most scholars will agree on this range. At best, some will say 400 BCE for Mahabharata (O) and 400 CE for Mahabharata (F).

There have been attempts to identify later layers and distinguish them from older layers, such as through examining the evolution of the Sanskrit language. But all such attempts are inherently subjective. A quote from 10.35 of Bhagavat Gita is relevant. In this section, Krishna is telling Arjuna how he is the most important among various categories. For example, among all shining bodies, he is the sun. Among all the gods, he is Indra. Among all the mountains, he is Meru. Among all animals, he is the lion. Among all rivers, he is Ganga, and so on. That bit of 10.35 states: ‘Among months, I am Margashirsha.’ Margashirsha is also known as Agrahayana, roughly from around November 21st to December 20th. Calendars differ across the country, but most people will agree the calendar begins with the month of Chaitra, roughly from March 21st to April 20th. Why would Krishna imply that Margashirsha was the most important among all the months? That can only be because the calendar then started with the month of Margashirsha. One should note that the word ‘Agrahayana’ literally means the first month of the year. Therefore, when this bit of the Bhagavat Gita was composed, Margashirsha (named after the nakshatra Mrigashira) was the first month of the year and the year started with the full moon in the month of Margashirsha. Many important festivals are still concentrated in Margashirsha. There are reasons why it is difficult to use astronomical data to date events, such as the date of the Kurukshetra War. Astronomical calculations moved from nakshatras to rashis (signs of the zodiac), from lunar months to solar months. Lunar months sometimes started with purnima (the day of the full moon), sometimes with amavasya (the day of the new moon). Therefore, one has to make assumptions, which in the last resort, are subjective. Subject to this, a respected astronomer named VB Ketkar (Indian and Foreign Chronology, 1921) gives us an answer to the question of when Margashirsha was the first month of the year. His answer gives us a range between 699 BCE and 452 BCE. This part of the Bhagavat Gita is therefore as old as Mahabharata (O).


If Gita is defined as a text where Krishna himself speaks to Arjuna, other than the Bhagavat Gita, one will only have Anu Gita. But if it is defined as any text that talks about the four human objectives (purusharthas) of dharma, artha, kama and moksha, there are several other texts

If they do, they will discover these other Gitas in the Mahabharata. We come back of course to the definition of ‘Gita’. If Gita is defined as a text where Krishna himself speaks to Arjuna, other than the Bhagavat Gita, one will only have Anu Gita. But if Gita is defined as any text that talks about the four human objectives (purusharthas) of dharma, artha, kama and moksha, there are several other texts. Of course, the entire Mahabharata is also about these objectives.

The Divinity of Desire