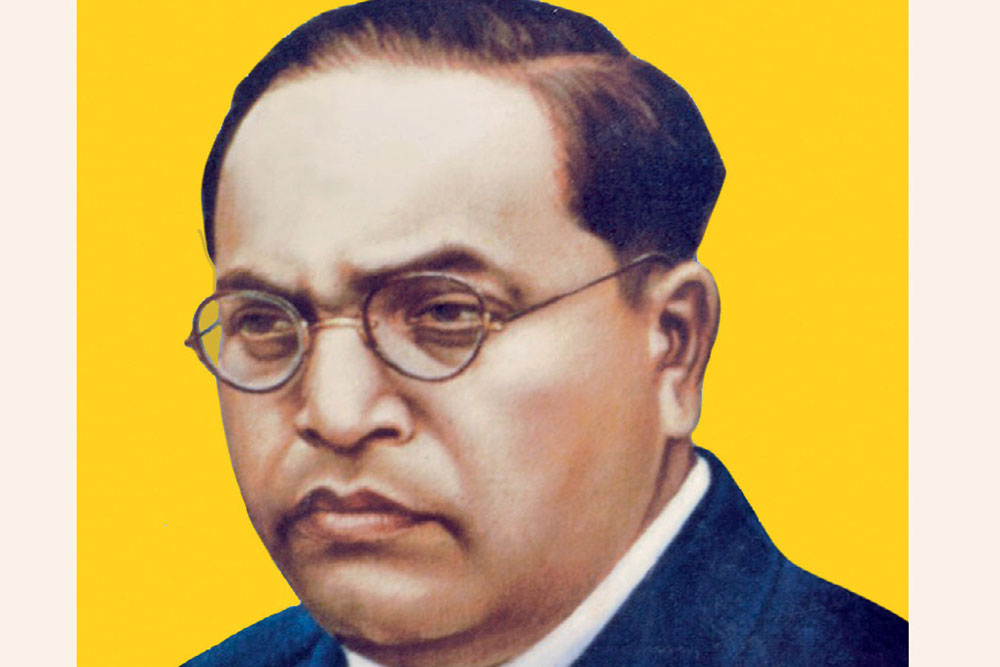 
IT WAS ON April 14th, while celebrating the 130th birth anniversary of Dr Babasaheb Bhimrao Ramji Ambedkar, that I was struck by a startling realisation. It was time to rescue him from the ‘Dalit’ straitjacket. Such an iron collar does not suit one of the foremost makers of our righteous republic.

The last couple of days were a busy time for all those who were identified as Dalit heroes, both established and upcoming. As a distinguished member of this select group said to me jokingly, “I am participating in five programmes today. They think of us only on this day and forget about us the rest of the year.”

While commiserating with him, I also reflected on the irony of reverse tokenism. Some of us, known admirers of Ambedkar, also came to be, if not “most wanted”, then at least also required. As the token savarna presences in such celebrations.

One reason for this, paradoxically, is just how deified Ambedkar is. There are probably more statues of Babasaheb in the world than of any other public or political figure. Some years back, there was a proposal to erect a gigantic 350-ft bronze figure of him, called the Statute of Equality, which would be taller than the Statue of Liberty. Why not? If the world’s tallest statue can be Sardar Patel’s Statue of Unity, why not something similar for Ambedkar?

But not just his deification, it is the (mis)appropriation of Ambedkar’s life and legacy by all shades of political opinion and all political parties which is an obstacle to engaging with him seriously, especially at his limits. All politicians vie with each other to extol him, pay their homage to him, garland or glorify him. We have thus turned Babasaheb into a new kind of ‘untouchable’—one who is off bounds or limits. You can only approach him from a distance, after taking your shoes off. Worship is fine, but to be closely in touch with his work, texts or life is not encouraged.

But would Babasaheb have approved of this? Not if we go by what he says. In what was arguably his most hard-hitting and well-known book, The Annihilation of Caste, he warns Hindu society of the ‘baneful effects of this worship of the past’. In the words of his teacher at Columbia, the famous American pragmatic philosopher John Dewey: ‘Every society gets encumbered with what is trivial, with dead wood from the past, and with what is positively perverse… ”


We have turned Babasaheb into a new kind of ‘untouchable’—one who is off bounds or limits. You can only approach him from a distance, after taking your shoes off. Worship is fine, but to be closely in touch with his work, texts or life is not encouraged. But would Babasaheb have approved of this?

That is why it is important to ask: what is our dharma as Ambedkar’s admirers? Surely it is to rescue Ambedkar from Ambedkarites. We might even ask: what was Ambedkar’s own dhamma as a maker of modern India? Let us turn, once again, to the last pages of Annihilation of Caste:

Carrying on in a similar vein against the ossification of social structures, he continues:

‘An ideal society should be mobile, should be full of channels for conveying a change taking place in one part to other parts.… This is fraternity, which is only another name for democracy. Democracy is not merely a form of government. It is primarily a mode of associated living, of conjoint communicated experience. It is essentially an attitude of respect and reverence towards fellow men’ (ibid).

No wonder, we must turn once again to that Ambedkar to help us out in our present conundrum.

In working against the ossification and hypostatisation of Ambedkar, I expect the privileged class among the Dalits to play a dominant role. Instead of cornering the benefits of reservations, they may consider opting out so that their less privileged brethren, lower down the slippery slope of deprivation, get its advantages too.

But, what is more, I also expect them to turn their attention to the savarnas who are now themselves dispossessed and depressed, the ‘new un-Dalit Dalits’, we should call them. Of these I would even count some Brahmins who have no benefits either of birth or state patronage, no education to speak of, and no job prospects whatsoever.

The Constitution that Ambedkar helped to frame does not contain the word ‘dharma’, but as sensitive readers have understood, it is permeated with ideas of Dharma both as righteousness and justice, not to speak of everyday morality and good conduct of both the citizenry, we the people, as well as our elected leaders.

The Dharma of the Constitution is a sacred covenant, which enjoins upon all Indians to fulfil their tryst with destiny, not just by demanding our rights but also by fulfilling our obligations and responsibilities. What was missing in the Constitution is amply evident in Ambedkar’s last great work, The Buddha and His Dhamma, spelt out in numbered paragraphs, of which I will quote some:

‘7. Religion, it is said, is personal, and one must keep it to oneself. One must not let it play its part in public life.

8. Contrary to this, Dhamma is social. It is fundamentally and essentially so.

9. Dhamma is righteousness, which means right relations between man and man in all spheres of life.

10. From this it is evident that one man, if he is alone, does not need Dhamma.

11. But when there are two men living in relation to each other, they must find a place for Dhamma whether they like it or not. Neither can escape it.

12. In other words. Society cannot do without Dhamma.

13. Society has to choose one of the three alternatives.

15. This means Society chooses the road to anarchy.

16. Secondly, Society may choose the police—i.e., dictatorship—as an instrument of Government.

17. Thirdly, Society may choose Dhamma, plus the Magistrate wherever people fail to observe the Dhamma.

18. In anarchy and dictatorship liberty is lost.

19. Only in the third [case] liberty survives.

20. Those who want liberty must therefore have Dhamma.’

Is it time, therefore, to turn away from Ambedkar as the deity of quotas? After all, he was not merely an advocate of a righteous republic, but also of a rational one. Ambedkar’s entire life-journey and struggle was about competence, not entitlement. He was the most qualified member of the makers of modern India, with a slew of degrees from the finest institutions of the world, including doctorates from Columbia University and the London School of Economics, not to mention having qualified as Bar-at-Law after two Master’s degrees and one Bachelor’s under his belt.

An Ambedkarite argument against excessive and everlasting reservations would be that they are bad not only because they are discriminatory against those who have the misfortune not to be born ‘backward’ in some caste-defined manner or other, but also to those of the beneficiaries who don’t really need or utilise them. The world is not known for absolute fair play; it is known for those who make something of themselves despite its rampant asymmetries. As VS Naipaul put it somewhat cruelly, if realistically, at the opening of his A Bend in the River: ‘The world is what it is; men who are nothing, who allow themselves to become nothing, have no place in it.’

This does not mean that we shouldn’t try to make it a better, more just place, with an equal chance for all. But it is also Ambedkar who famously wrote, ‘… there is a difference between appeasement and settlement, and that the difference is an essential one.’ Though the context was different and the book was called Pakistan or the Partition of India, the underlying idea holds: ‘Appeasement sets no limits to the demands and aspirations of the aggressor. Settlement does’ (ibid).

Getting unearned benefits unto perpetuity only weakens future generations of recipients and jeopardises their prospects. In a competitive world where real competence matters, we are sentencing such of our wards as we label backward to false solace and promises.

It behoves us therefore to salvage Ambedkar from negative Ambedkarism. We must invite into an open and fraternal dialogue all those who wish to unite for the greater common good, which is the progress and prosperity of Bharat Mata, Mother India.

The demand for our times is a nation-positive Ambedkarism and a Dharma-positive Dalitism. Needless to say, neither of these should be exclusionary or promotive of the grammar of anarchy which Ambedkar himself decried.