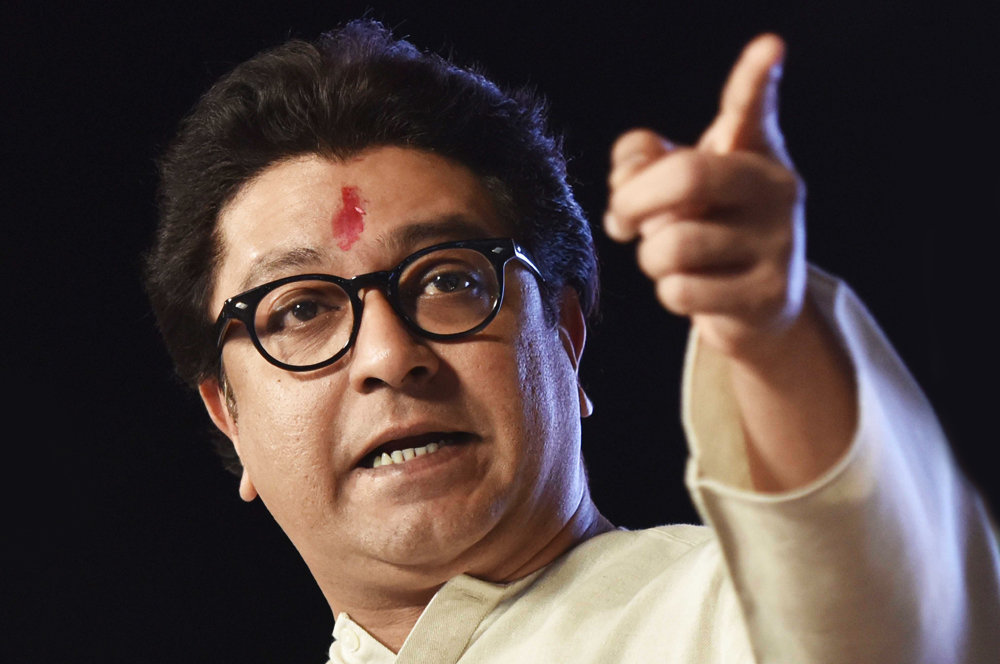 
IT IS A LITTLE difficult for anyone to be in Raj Thackeray’s shoes. Before the last General Election, he had suddenly discovered an anti-Narendra Modi vein and used his considerable oratorical prowess laden with sarcasm to viral retweets and Facebook posts. But online isn’t votes and the BJP easily swept the state. In the Assembly elections, he was ignored by every alliance, ending up with a single seat and a hugely reduced vote share. No one was even sure what his party was contesting on. When he broke away from the Shiv Sena, the initial idea was development politics with a Maharashtrian twinge. Then it quickly devolved into migrant bashing. Then it became whatever caught its fancy. And, now after his party’s many avatars and steady decline, he stands on the sidelines watching his cousin without the Thackeray charisma, the reason why he was forced out of the Sena, astutely and unexpectedly manoeuvring himself into the chief minister’s chair. Raj Thackeray’s response: to now turn rightwards in the Hindutva direction, into that very corner of Modi whom he had mocked and lampooned.

Like companies that rebrand themselves with a new logo, his party recently got itself a saffron flag and, to re-emphasise the Hindutva turn, jumped right into the Citizenship Amendment Act/National Register of Citizens issue on the side of the Government, and with some Muslim bashing. As the Hindustan Times reported, ‘Addressing his workers on the occasion of MNS’s first Maha Adhiveshan (conclave), Raj Thackeray asserted his new Hindutva agenda. “Our country is not some place where anyone can come and reside. I am going to petition the Central government to first evict the Bangladeshi and Pakistani infiltrators from this country. We are sitting on a volcano…He also called upon Muslims to remove loudspeakers from mosques.” “Everyone should leave their religion at home. If my aarti [prayer] in the temple is not troubling you, why should namaaz be read out on a loudspeaker,” he asked.’

Thackeray, of course, feels that with the Shiv Sena turning ‘secular’ by allying with the Congress and the Nationalist Congress Party (NCP), it leaves a vacuum for the MNS to fill. Except that the Shiv Sena was losing its Hindu votes already to an ascendant BJP. And so what Thackeray is actually doing is competing with the BJP. Why would he succeed where the Sena was failing? But his present is even worse than any bleak future. So the best he can hope for is to be a junior ally to the BJP, a role that the Sena had been unwilling to perform. But then there is the question of what is in it for the BJP, which clearly wants a single party majority eventually. All that he can do is be of nuisance value against the Sena and that is only useful till the inevitable implosion of the Sena-Congress-NCP alliance. The Sena would then return to the BJP’s embrace and that would again leave Thackeray out in the cold. Any which you look at it, short of a white swan event propelling him into the centre of Maharashtra’s consciousness, Thackeray remains that common politician in search of himself.