Jai Bhim and the search for justice in Indian cinema 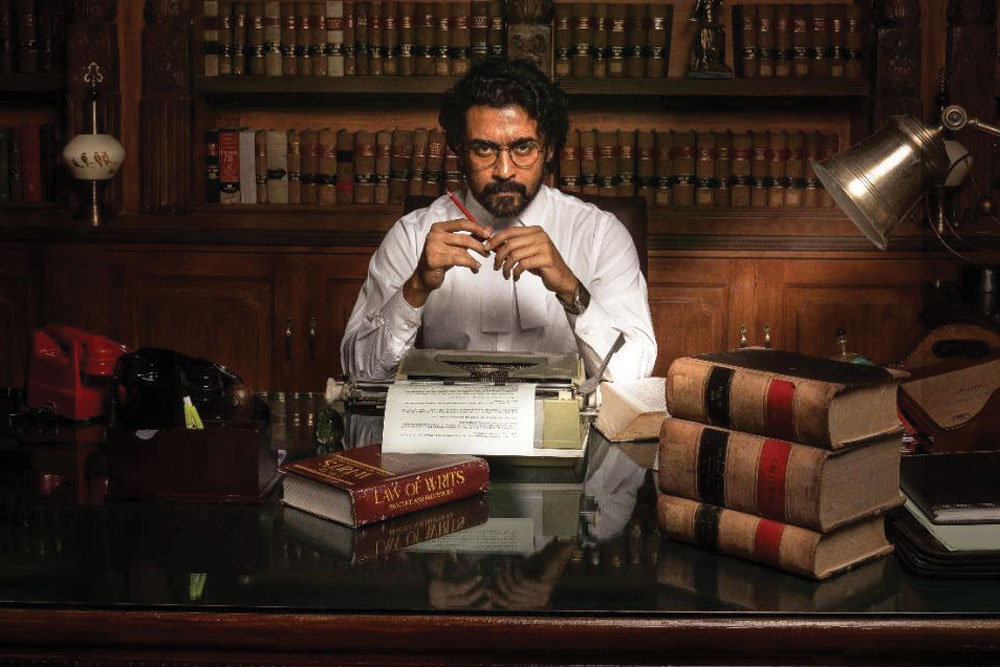 
THE COURTROOM DRAMA is a popular genre in Hindi cinema, with many films having their denouement in a highly melodramatic court scene where the truth is revealed. This week, I watched the recently released Tamil film Jai Bhim, where the hero, Suriya, plays real-life lawyer Chandru. He has taken on the case of a tribal woman whose husband has gone missing in police custody. This particular courtroom drama deploys the full panoply of melodrama—a superstar good lawyer fighting a wicked, state-appointed advocate as they personify the struggle of good versus evil. Our hero’s body language is dramatic, in particular, his swaggering walk, but there are also costumes where the colonial meets the present legal system, high formal language (I don’t understand Tamil, but we hear legal English as well as Latin and Sanskrit), and we see a helpless widow symbolising a wider victimhood. The courtroom drama unfolds slowly in this very long film: the antagonist presents argument/ evidence that seems to mean conclusive defeat, and then a twist allows our hero to snatch back the case and appeal to the judges. This sequence is then repeated.

Chandru just needs a blue suit and a book under his arm to go with his glasses to become Bhimrao Ambedkar, as the title suggests. Chandru shows that the law is no fool, and the mechanisms of the state can and do uphold justice through the good lawyer, the good policeman and the fair and objective judges. Jai Bhim argues that state powers need to be increased to protect the rights of all Indian citizens and that the corrupt, especially when they are officers of the state, such as the bad policemen, should receive the full force of punishment.

The politicians exhibit moral greyness in relation to this legal black-and-white. The attorney general wants to get into politics and the chief minister exerts pressure on the police to settle the case quickly, so maybe not all such mechanisms are safe. However, there are alternative sources of power for the righteous, such as the trade unions, the activist teacher who imparts literacy and social justice while the iconic image of Karl Marx in Chandru’s office seems a secular god. The references to education and literacy as means to power are clear: the tribal woman’s daughter picks up a newspaper to read the news while her mother cannot even sign her name. Written pamphlets mobilise the people to demand justice and the nameplate at the family house shows there is a literate audience. (I am reminded of the claims for literacy in Mother India and the role of the teacher in empowering the villagers, but I digress.)

The courtroom drama enables discussion about social issues often through the family and the state. Although I am not familiar with courtroom dramas in Tamil cinema, I was enthralled by the celebrated film Parasakthi (1952), which puts society itself on trial in court. In the courtroom denouement, the older brother is the judge, the sister the plaintiff and the younger brother (Sivaji Ganesan) a witness who attacks social evils, including poverty, treatment of women and, (in)famously, religion.

The courtroom is a stage for showing that the weak can, and should, be protected by the law. The great BR Chopra, known to the younger generation as the maker of the television serial Mahabharat, the epic story of a family argument whose central theme is dharma, made several of the most important courtroom dramas where the weak and helpless find justice.

Two of his productions were directed by his youngest brother, Yash Chopra: Dhool Ka Phool (1959), where the court examines the rights of an illegitimate child (who had earlier been the subject of the famous song, ‘Tu Hindu banega na Musalman banega’) and the father who refused to do his duty is seen as guilty rather than the “fallen woman”; and Waqt (1965), where Lal Kedarnath’s family was separated after an earthquake (often taken to symbolise Partition) and ultimately reunited in court as a false accusation of murder allows identities and connections to be revealed. BR Chopra’s own directorial work, Kanoon (1960), succeeded despite being a songless film, as the dramatic force is taken by the argument for the abolition of the death sentence as the lawyer has to seemingly choose between his in-laws and justice.

Many films have focused on the figure of the raped woman from Mehboob Khan’s Amar (1954) where a female lawyer (Madhubala) protects a village woman (Nimmi) who has been raped by her fiancé, an upper-class lawyer (Dilip Kumar); Damini (1993) where a daughter-in-law speaks up against her in-laws on behalf of a raped servant; a man (Amitabh Bachchan) seeks revenge for his wrongful imprisonment and rape of his wife in Andha Kanoon (1983); while the lawyer (Amitabh Bachchan) speaks up for women in Pink (2016).


Jai Bhim argues that state powers need to be increased to protect the rights of all indian citizens and that the corrupt, especially when they are officers of the state, such as the bad policemen, should receive the full force of punishment

In Guru (2007), capitalism defends itself in court, while Jolly LLB (2013) defends lower-class men. The critically acclaimed Court (2014) was a multilingual film about the trial of a protest singer whose song allegedly provoked a sewer cleaner into suicide, while several recent films have been based on true stories where the victims are Muslims accused of terrorism—Shahid (2013) and Mulk (2018).

The true courtroom drama of the naval officer, Captain Nanavati, who shot dead his wife’s lover and was acquitted, has long fascinated, whether in history (Gyan Prakash’s Mumbai Fables, 2011), fiction (Indra Sinha’s The Death of Mr Love, 2002) or in films which were vague about their source (Yeh Rastey Hain Pyar Ke, 1963) or open (Rustom, 2016).

In all these films, the court is where morality is put on trial and the law upheld. My favourite of all is Raj Kapoor’s Awara (1951), one of the greatest international hit films of all time, popular across all of Asia and remade in many local versions. Its success is likely to be due to its two tightly interwoven strands of a great romance on the one hand, with brilliant stars, fabulous songs and dialogues, and the challenge to ideas of social mobility on the other.

The story is influenced by Nehruvian socialism through the work of leftist writers, notably KA Abbas, VP Sathe and lyricist Shailendra. It argues that poverty and social circumstance can condemn a person for life, ranging from unemployment, lack of education, injustice and prison sentences to the appalling treatment of a child. Raj lives in fear of both the judge (his unknown real father) and Jagga (a thief who adopts him), being unfortunate whether he has two fathers or none at all. It seems that the family is a source of conflict, strife and breakdown rather than a centre of strength and support.

Awara also raises the issue of widow remarriage while making clear links to the story of Sita, and all women, through Raj’s mother who forgives her husband: ‘Julm sahe bhaari Janak dulari/The beloved daughter of Janak (Sita) had to suffer terribly.’

Awara asks the question: is character formed by one’s birth or by one’s upbringing? These opposing views are held by Judge Raghunath (Prithviraj Kapoor) and his son Raj (Raj Kapoor), who do not know they are related until the courtroom drama towards the end of the film. The judge’s ward, Raj’s beloved Rita (Nargis), seems to put the whole institution of the family on trial, the presiding judge played by Prithviraj’s father, Basheswarnath Kapoor, who sentences the rebel Raj to three years of hard labour.

Raj Kapoor’s tramp is not so much Chaplin’s degraded gentleman but someone dressing up in the rags of discarded colonial garb in a postcolonial situation. The British-based courtroom is another colonial remnant which can be reappropriated. Many of India’s freedom fighters, including Gandhi and Nehru, had training in the English legal system. Jai Bhim invokes Ambedkar, India’s first minister of law and the chief architect of the Constitution of India, reminding us that justice can still be achieved through the institutions of the state as long as those who wield power are also put on trial.