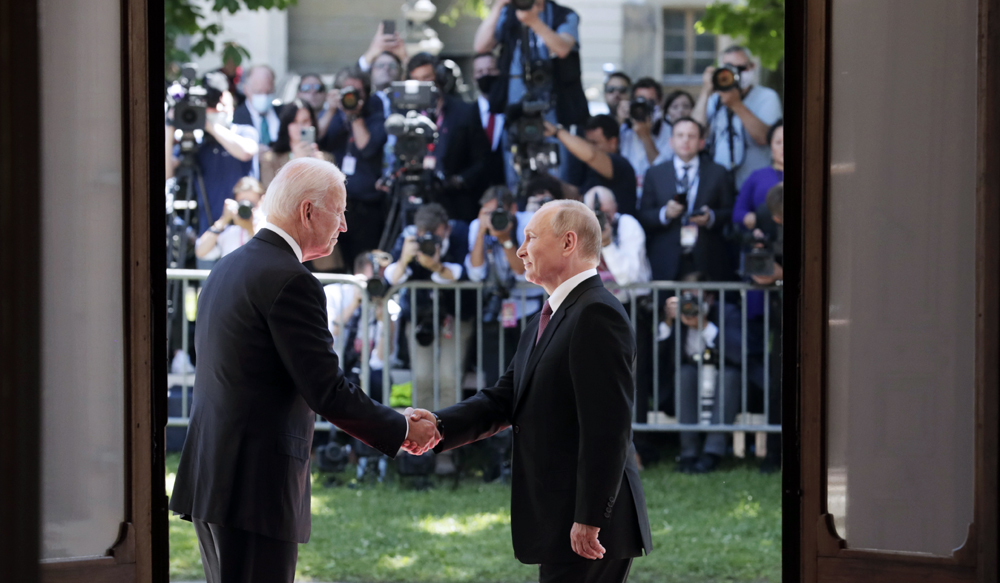 
The inevitability of success is the hallmark of summits of powerful nations as they are programmed not to fail in any circumstances. And even if they do, there will be enough in the speeches, statements, joint or otherwise, comments to the press and body language of the leaders to show that the world has become a better place since they met. In fact, the Geneva Summit between President Joe Biden and President Vladimir Putin had so many positive and negative signals in it that calling it a success or a failure is a matter of choice of words and interpretation. It has certainly set a predictable course for the two countries, away from another Cold War.

The expectations were low as there was considerable debris left behind by Trump with his love-hate relationship with Putin. Trump had behaved like Putin’s poodle at the Helsinki Summit of 2018, saying at one stage that he relied on Putin rather than his own intelligence agencies. At the same time, there were many instances of tension because of the contradictions in Trump’s efforts to isolate China by cultivating Putin. Biden inherited a chaotic mix of the good, the bad and the ugly, which necessitated a resetting of relations in a positive manner even if no decisions could be reached. But the comments made by both prior to the meeting were ominous. Biden had called Putin a killer and the response was that it takes a killer to find another. Against that backdrop, a four-hour meeting, with “no hostility and no strident actions”, as Biden described it, was a surprise.

Biden’s motivation was to bring America back to the centre-stage with renewed loyalty to the allies and to deliver a message to Russia that, unlike Trump, he considered both Russia and China as his adversaries. After meeting G7 leaders and NATO allies, he felt bold enough to confront Putin with a list of demands. Putin, emboldened by American vulnerability, rebuffed all of them firmly, but without precluding adjustments in the future.

Ahead of the Geneva Summit, National Security Advisor Jake Sullivan acknowledged that there were no “deliverables” and explained that the meeting was “an opportunity to communicate from our president to their president what American intentions and capabilities are and to [hear] the same from their side.” That explains why Biden did not go beyond raising the issues, even though Putin was in a denial mode. But in the process, Putin got the upper hand since the summit elevated him to a level of equality with Biden. Moreover, just before the summit, Biden had used adjectives like “bright”, “tough” and “worthy adversary”, etcetera, to describe Putin.

During the days he spent in Europe attending the G7 and NATO meetings, Biden was preoccupied with China, though his meeting with Putin was just around the corner. As he heard from his allies about the complexity of the Chinese challenge, he may have made up his mind that Russia is only a secondary challenge, which could be dealt with diplomatically. Though he did not adopt Trump’s policy of reaching out to Russia in order to isolate China, Biden decided to remain engaged with Russia without precipitating a crisis. The returning of ambassadors was a signal that the bitterness in bilateral relations could be reduced over time. At the same time, he indicated the red lines in various issues of tension. Putin bluntly said that he was not looking for love and friendship, but a primarily pragmatic relationship. Both agreed that there was no breakthrough, but no hostility either, an assessment that Biden implicitly acknowledged. Putin, obviously, realised that cooperation with the West was in his interest at this time.

In the exchanges on the specific issues raised by Biden, Putin gave direct answers. Cyber attacks and ransomware were first on Biden’s list. He said that the US would retaliate if attacks continued. He even hinted that the US had the capability to meet any cyber threats in the future. Putin said without batting an eyelid that most of the cybercrimes of the world took place in US’ cyberspace. He denied Russia’s involvement in any of the reported instances of cyber attacks, particularly the “Solar Winds” episode in 2020. A decision to study the situation in specific cases was a baby step forward.

Biden said that human rights would always be on the table for discussions with Russia, and raised the suppression of dissent in Russia, referring specifically to the case of Alexei Navalny and two wrongly imprisoned Americans. He warned that there would be serious consequences if Navalny died in prison. Putin strongly resisted the charges by saying that Navalny had broken the laws of the country and maintained that what happened in his country was his business, while making charges about American excesses. He pointed out that the Guantanamo prisoners’ camp was illegal under international and US laws. He also referred to the CIA prisons in Europe and alleged that they were in violation of human rights.

On Ukraine, Biden said that the US was strongly committed to the sovereignty and territorial integrity of Ukraine. Putin maintained that there was not much to discuss on issues like Ukraine’s entry into NATO. He claimed that Biden had agreed that the situation in Ukraine should be settled on the basis of the Minsk package of measures. Biden also brought up the question of Russian meddling in the US elections, but apparently, there was no response to it, as though it was a thing of the past.

A discussion on strategic stability was a positive outcome as Putin saw in it the recognition of the special responsibility of the two countries with the largest nuclear forces. The two nations noted the extension of the New Start Treaty and indicated that the future discussions will cover limitations of new weapons systems. A joint statement of the two presidents was made, recommitting themselves to Arms Control. Other areas of cooperation suggested were to counter terrorism in Afghanistan and provision of humanitarian assistance in Syria. There was also some understanding on the need to restrain Iranian nuclear capability. The Arctic was also discussed as a possible area for avoidance of conflict and building cooperation.

The entire world was paying attention to Geneva to look for the contours of a post-pandemic world. With the improvement in Russia-China relations, Putin must have been mindful not to have any deals beyond the dictates of his national interests. Nothing that happened at the summit would have caused any concern in Beijing. As far as India is concerned, a certain stability in the US-Russia equations is desirable because of our deep involvement with Russia in defence and trade matters. Our purchase of S-400 missiles needs to be cleared. Russia has shown certain sensitivity to the involvement of India in the Quad and the other linkages that India has developed with the US. The strategic stability moves of the US and Russia are also welcome to India as they reduce the nuclear danger and vertical proliferation.