Hindi films and the eternal romance of snow 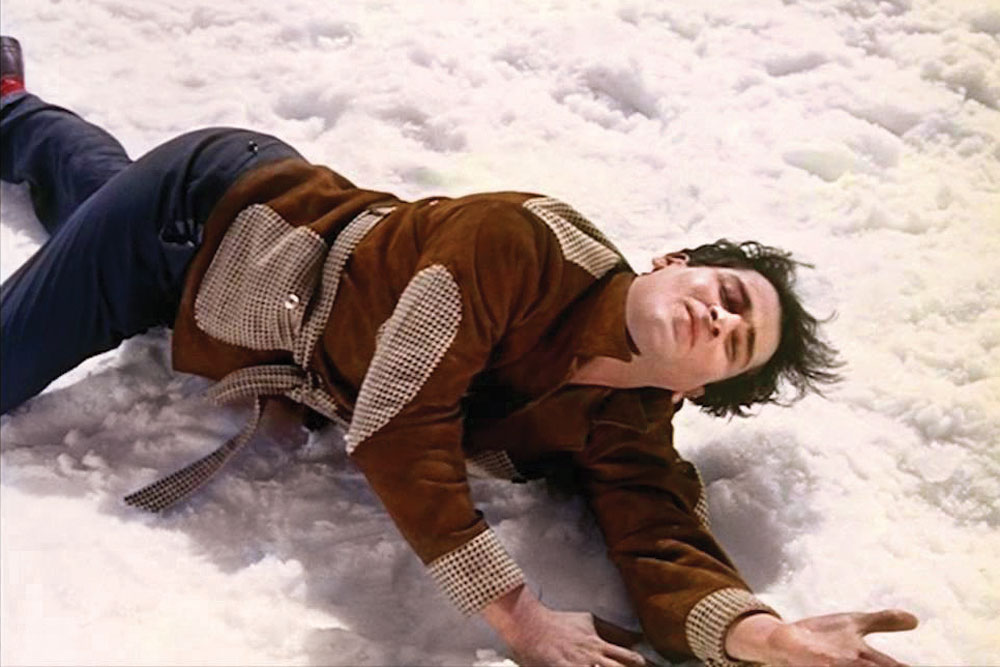 
WE’VE JUST HAD the coldest weather in the UK in 25 years, with even some stretches of the Thames freezing. Many of us who grew up in the 1960s didn’t have central heating and this meant frozen and leaking pipes. So for those of my generation nothing beats viewing snow from the comfort of a warm house, enjoying the frenzy at the bird feeder as the sparrows and tits dip in and out until the robin chases them away. Then off he flies and it all starts again, while the blackbird, too big for the feeder, waits patiently underneath for his share.

One has to brave the cold to exercise as we’re barely allowed out during our endless lockdown, remembering that there’s no such thing as bad weather, only bad clothes. When we went to Murree in Pakistan 30 years ago, we had ‘bad clothes’, so had to buy woollens on arrival, but had only sandals for walking in the snow. I don’t remember ever being so cold but the open fires in the old Hotel Cecil were lifesavers. This mid-19th century hotel has been used as a movie location for Pakistani films, such as Armaan (1966), another feature that Murree and Shimla share, the latter also having its own Hotel Cecil.

Hindi films are often dismissed as escapist, so one has to escape from somewhere to somewhere else, typically from the city with its heat and crowds to cold, sparsely populated destinations such as hill stations, Kashmir, and Switzerland.

In Hindi films, love and beauty are closely linked, especially in film songs. These are shot in landscapes of love, often spectacular pastoral settings well suited to the music, lyrics and dance as well as the beauty of the stars and their costumes. Viewers delight in this celebration of nature which is so connected with love throughout the history of Indian poetry.

Hindi films are often shot in the cool hills and mountains. Formerly, this was mostly in Kashmir, but also in colonial-era hill stations. Kashmir has long been an important cultural centre of India. The Mughals escaped there when the north Indian plains were too hot, the hills and cooler climate being redolent of Persian and Central Asian landscapes, and created Persian-style gardens for their recreation. A similar nostalgia also affected the British, who established hill stations in the image of the UK as their summer retreats from the major cities. The rapid growth in Indian tourism in the last few decades has meant many more people now share these tastes, enjoying Kashmir and the hill stations as exotic locales as well as cooler and more comfortable places to spend the hot weather vacations.

Kashmir was one of the early outdoor locations for Hindi cinema, with Raj Kapoor’s Barsaat (1949), moving between it and an unnamed city, contrasting the two, the journey between the village and the city being a popular motif throughout Indian cinema in classics such as the many versions of Devdas. Much of Barsaat was shot in a studio and I don’t recall any snow scenes in it or in other films which focussed on the Dal Lake, such as Shammi Kapoor and Sharmila Tagore’s Kashmir Ki Kali (1964), which is one of the many films that associate Kashmir with tourism and romance.

Shammi is forever associated with Kashmir through his song in Junglee (1961), where the Westernised, unemotional Shekhar starts reading Urdu poetry and bursts out to hurl himself around the snow with the immortal cry, ‘Yahoo!’ Raj Kapoor used the isolated log cabin and the remoteness of Kashmir in Bobby (1973), though again I don’t recall snow, nor for Shashi Kapoor in Jab Jab Phool Khile (1965). This was a largely non-Muslim Kashmir, just a beautiful holiday destination.

Kashmir later went from paradise to hell, the latter shown in the many more political films, whether Mani Ratnam’s Roja (1992), Vidhu Vinod Chopra’s Mission Kashmir (2000), Fanaa (2006) or Vishal Bharadwaj’s Hamlet as Haider (2014), and in fiction, such as Arundhati Roy’s The Ministry of Utmost Happiness (2017).

It is often said that Hindi films are shot in Switzerland as the political situation has made it difficult to film in Kashmir, yet filming in hill stations has decreased overall given the rapid expansion in overseas shooting. Switzerland may be similar to Kashmir in its combination of mountains and touristic appeal but the nature of this tourism and the specific meanings of the Swiss landscape are very different. Switzerland has the natural beauty but also associations with high-end tourism, secretive banking practices, health and cleanliness.

While Raj Kapoor shot sequences from Sangam (1964) in Switzerland, Hindi cinema is most closely associated with Switzerland through Yash Chopra’s films, a landscape that created a new kind of romance tied to middle-class consumerism, depicting the lifestyles of the super-rich. Switzerland allowed for a display of a radically different and expensive lifestyle with luxury shops, hotels, sports, and different costumes which contrasted with the snow, in particular, Rishi Kapoor’s famous knitwear. Chiffon saris also look nice set against the snow but the very thought sends a cold shiver through my Aran jumper.

In London’s recent snowy weather, I compiled a personal ‘Top Ten Hindi Snow Songs’. Yash Chopra soon dominated. ‘Maine ek khwaab sa dekha hai’ (Waqt, 1965), which began as a phone song, moving to flowering gardens before snow scenes. Then ‘Hum aur tum’ (Daag, 1973), ‘Tere chehre se’ from (Kabhi Kabhie, 1976), along with the first rendition of the title song. It was only after this he began to shoot in Switzerland, with numerous snow scenes, including the title song of Chandni (1989) and ‘Tu mere saamne’ (Darr, 1993). In his last film, Jab Tak Hai Jaan (2012), which had scenes in Switzerland and Kashmir, we saw Samar (Shah Rukh Khan) shovelling (artificial) snow in London while Meera (Katrina Kaif) ran past him into a church. Aditya Chopra also celebrates snow and Switzerland in songs like ‘Zara sa jhoom loon’, and (parts of) ‘Tujhe dekha to ye jaana sanam’ (DDLJ, 1995) and ‘Humko humise churalo’ (Mohabbatein, 2000). I remember being about the coldest I’ve ever been on the sets of the latter at Longleat in Wiltshire.

So, excluding these, here are my Top Ten Snow Songs.

‘Yahoo!’ from Junglee, where Shekhar (Shammi Kapoor) realises he’s fallen in love and leaves his book of Urdu poetry to run out in the snow to tell the world he’s in love.

‘Naina barse rimjhim, rimjhim’ (Woh Kaun Thi?, 1964), shot in Shimla snow. The well-known anecdote is worth retelling, namely that Lata Mangeshkar hadn’t yet recorded the song in time for filming so crowds who gathered were surprised to witness Sadhana singing playback to Madan Mohan’s voice. And a special mention to Manoj Kumar’s beret.

‘Gunguna rahe hain bhanware’ (Aradhana, 1969), a film where I love every song.

Hindi film music changed with the appearance of AR Rahman, who composed this lovely song about love in Kashmir, despite the troubles: ‘Yeh haseen vadiyan’ from Roja.

A bit of a cheat, but in Oye Lucky! Lucky Oye! (2008), the use of Kishore Kumar’s ‘Chahiye thoda pyaar’ in a desolate drive through the snow, though it rescued the song from the fight sequences in Lahu Ke Do Rang (1979).

‘Mere haath mein’ from Fanaa, a love story set in Kashmir, where families are torn apart by politics.

‘Subhanallah’ is such a lovely song from Yeh Jawaani Hai Deewani (2013), with two of my favourite actors, Ranbir Kapoor and Deepika Padukone.

Haider, Vishal Bharadwaj’s setting of Hamlet in Kashmir, was an engaging but troubled film, but still had space for romance with his music, Gulzar’s lyrics and Arijit Singh’s voice: ‘Khul kabhi toh’.

Lastly, one of my favourite films of the last 10 years is Lootera (2013), which evokes a Bengali world in the first-half (not least in the presence of the zamindar played by Barun Chanda, famous for Satyajit Ray’s Seemabaddha, 1971), while the second-half moves to Dalhousie in the snow. The nostalgia for hill stations in the snow and the love story from O Henry’s The Last Leaf is a chilling love story compared to the warm first-half. The song, ‘Zinda hoon yaar’ as the Lootera (Ranveer Singh) climbs a tree to hang an artificial leaf in the hope she won’t die until the last leaf falls, is just one of many evocative songs in the film.

Today, many big Hindi films are moving away from masala and Bollywood to ‘real’ locations throughout India. The beauty of snow is such that I hope it remains a feature on Indian screens, though I’ll be happy to see it go from my garden after a week.