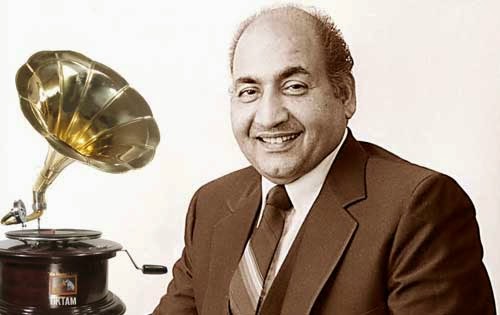 The evening descended on Mohammad Rafi’s life decades ago, on the last day of July 1980. That song, ‘tu ganga ki mauj / main jumna ka dhara’ yet creates widening ripples in the heart.

It is the evening of Rafi’s memories that is upon us today. And yet he lives on, part of you, part of me, a wholesomeness which defines our understanding of music in our part of the world.

The rays of a tired sun play havoc with the cheeks of the woman you love to distraction. And you hum the old Mohammad Rafi song, ‘hui shaam un ka khayal aa gaya / wohi zindagi ka sawal aa gaya’. And there you have it. In all the years since July 1980, life without Rafi has been a time of declining, indeed increasingly mediocre music. He was a maestro, in that true sense of the meaning. Think of ‘Radhike tu ne bansri churai’; or dwell on ‘hue hum jin ke liye barbaad’; or hum ‘Madhuban me Radhika naache re’. There was that sure sense of command in him of the various elements of music. Was that voice a gift from God? Never mind the answer. But what you do know is that Mohammad Rafi was an artiste whose presence in Indian music overshadowed every other presence in his time. That coruscating ghazal, ‘na kisi ki aankh ka noor huun / na kisi ke dil ka qarar huun’?

Of course, today you can have all those challenges and competitions, in all manner of inanity, on television where the young gyrate to the songs of others who inhabited the period that Rafi so completely dominated. But when the young do not go back to Rafi, to Saigal, to Shamshad Begum, you have that certain feeling, tongue-in-cheek, that people have little wish to tamper with the good and the great. Or music, for them, has mutated into a circumscribed affair. Rafi’s versatility said it all. Remember that spiritually uplifting ‘parwardigar-e-alam tera hi hai sahara / tere siwa jahan mein koi nahi hamara’? Hum it, even as the monsoon clouds explode in thunder and lightning. There will come into you a true light of God as you have never experienced before.

And light is also what you are suffused with when you plumb the depths of Rafi’s love songs. There is the racy that stops the heart in a woman when he sings ‘mohabbat choome jinke haath /jawani paaon parhe din raat’. And then there is ‘aise to na dekho / ke hum ko nasha ho jaaye’. Or maybe the woman you love will join you, to recreate the old Rafi-Lata duet, ‘kabhi raat din hum dur thhe / din raat ka ab saath hai / wo bhi ittefaq ki baat thi / ye bhi ittefaq ki baat hai’? Or perhaps you will recall that scene where Dilip Kumar sings for a hard to get Waheeda Rehman: ‘tu hai saqi / main hoon sharabi’. Travel back to ‘aap ke haseen rukh / pe aaj naya noor hai / mera dil machal gaya to mera kya qusoor hai’ or ‘rukh se zara naqab utha do mere huzoor’.

Tragedy, overwhelming degrees of it, characterised Rafi’s songs. Few could do it better than he, if at all they could do it. Watch the stars emerge from the womb of a pregnant night and hear the sadly lilting ‘koi saghar dil ko behlata nahi / bekhudi mein bhi qarar aata nahi’. Or there is the heart-breaking ‘toote hue khwabon ne / hum ko ye sikhaya hai / dil ne jisse paya tha ankhon ne ganwaya hai’. In ‘main zindagi ka saath nibhata chala gaya / har fikr ko dhuen mein urhata chala gaya’, you see not worry but a world burning up in the cigarette smoke rising from Dev Anand’s lips. In ‘kabhi khud pe / kabhi halaat pe / rona aaya’ you spot the embers of a heart burned up in rejection. ‘Dil ke jharoke mein tujh ko bitha kar’ is the collapse of a world.

Tragedy defined Rafi’s world of music. That is the unvarnished truth. But then, there are all the other truths about him. He could just as easily slip into singing numbers that were positively light, even comical. In ‘kanto mein phansa anchal / zulfon mein phansa ye dil’, it is a frivolous Rafi you run into. Much a similar sense of light-heartedness runs through ‘lal chharhi maidan khari’ or ‘ae dil hai mushkil jina yahan /zara hat ke zara bach ke / ye hai Bombay meri jaan’. There are lots more. The repertoire does not end, not here, not anywhere. Try recreating the magic of ‘na jhatko zulf se paani / ye moti phuut jayenge’ and you will know. Do the same with ‘sau bar janam lenge / sau bar fana honge’.

Reflect on Mohammad Rafi in the entirety, in the completeness he brought to his music. In the movie Aan, the energetically romantic ‘dil mein chhupa ke pyar ka toofan le chale’ is soon replaced by the calmer ‘takra gaya tum se dil hi to hai / roye na ye kyun ghayel hi to hai’. You are quite likely to be drawn, suddenly as it were, to ‘pukarta chala hoon main / gali gali bahar ki’. And just as you begin telling yourself that no song could beat that one in appeal, you remember the quietly passionate ‘tere mere sapne ab ek rang hain’ from the movie Guide. That song, you know, is a statement on love, on the heart as it should be beating in one who finds oneself in love. ‘Suhani raat dhal chuki’ and ‘teri ankhon ke siwa duniya mein rakkha kya hai’ are but variations on the theme of love between man and woman. Remember ‘tujhe kya sunaoon main dilruba / tere saamne mera haal hai’?

And, of course, love finds other ways of insinuating itself into the heart, as in ‘chhalkaye jaam aaiye aap ki / ankhon ke naam honton ke naam’. And yet love is all too often unrequited, or caught in a maze not of its making. In Meri Surat Teri Ankhen, a decidedly less than good-looking Ashok Kumar, his back turned to a startlingly beautiful, startlingly surprised, quietly approaching Asha Parekh, sings in all the gloom he can muster. ‘Tere bin soone nayan hamare’ is a song for those who come that close to love, only to see it slip away and farther away. Such a sense of gloom, of quiet desperation comes alive in ‘maine chand aur sitaron ki tamanna ki thi / mujhko raaton ki siahi ke siwa kuch na mila’; and in the duet, again with Lata Mangeshkar, where the subdued lover in him sings of love getting into bad knots: ‘dekh liya main ne / qismat ka tamasha dekh liya’.

Rafi was of a class, indeed let his music create a class that began and ended with him. If the songs of his peers were noted for rarity in tone and imagery, Rafi’s rested on the unique. People could sing his songs, but they could not replace them. If he danced his way through the sheer youthful joviality of ‘hum tum ye bahar dekho rang laya pyar / barsat ke mahine mein’, he also ponderously made his way through ‘dil jo na kaeh saka / wohi raaz-e-dil kaehne ki raat aayi’. Ah, yes, we remember ‘kabhi na kabhi kahin na kahin / koi na koi to aaye ga / apna mujhe banaye ga’. And the eternally romantic ‘tumhari zulf ke saaye mein / sham kar loonga’? Or the rebellion-driven’?

It is a lost world — of innocent love, of old-fashioned pathos, of timeless passion — that rises out of the depths when you recall Mohammad Rafi. He was a world unto himself; his music was a magical carpet that transported you to the stars — ‘chalo dildar chalo chand ke paar chalo’. You think of the days that began with his songs, that ended with his melody. And from somewhere out in space the cadences of poetry flow in. You seem to hear once more the song that made its way into your soul when you sweated through teenage football in school. In ‘yaad na jaaye beete dino ki / jaa ke na aaye jo din / dil kyun bulaye unhen’, a slice of Rafi shines.

Tiptoe into your world of dreams, with ‘main gaoon tum so jao / sukh sapnon mein kho jao’, as the night lengthens into poetry. Waltz away into the cosmos with her whom you love in the light of the moon to the strains of ‘hum aap ki ankhon mein / iss dil ko basaa den to’.