Being word-weary in the time of Balakot 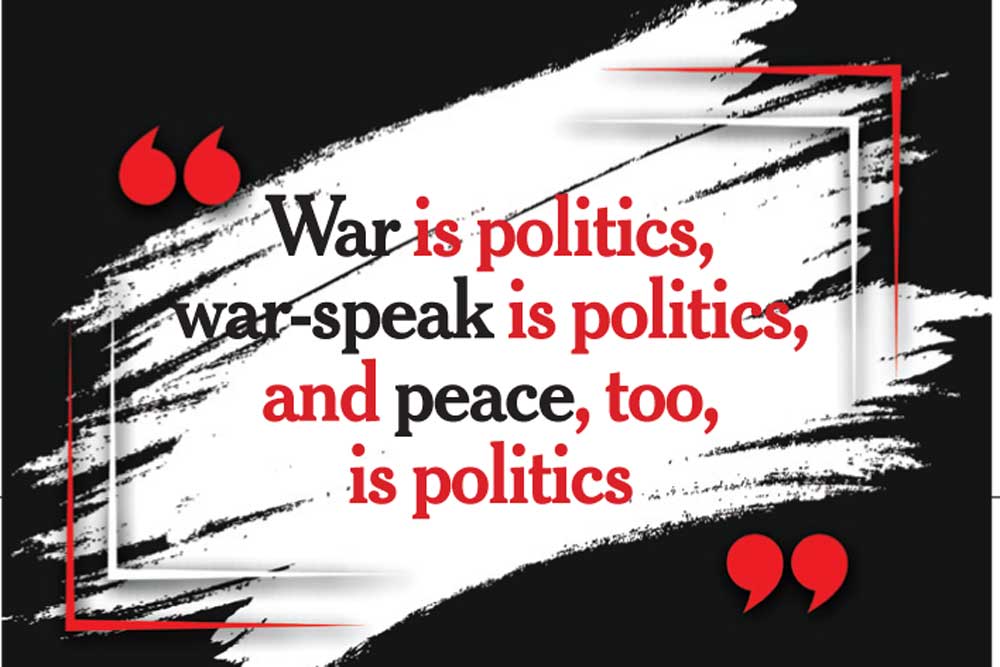 WORDS ARE EVERYTHING. Words build nations stronger with raw material drawn from fear. Words make being great possible when the wretchedness of the present is of the enemy’s making. Weaponised and deployed in a terrain caught between

excessive patriotism and liberal scepticism, words unify, inspire, divide and frighten. Words make all the difference, for the kinetic force of history is preceded, or followed, or powered, by the politics of language—all those theologies of liberation, all those ideologies of resistance. Words take us into the minds behind change. They add poetics to the hopes and anxieties of an age. So we hear Churchill, the war poet in power, telling them that “without victory, there is no survival”, that he has “nothing to offer but blood, toil, tears and sweat”. We hear Gandhi telling them that “the weak can never forgive [because] forgiveness is the attribute of the strong”, that “an eye for an eye only ends up making the whole world blind.” We hear an FDR simply shrugging that “I hate war.” Words are at play at a time when we are nervous; words that emotionalise the mood, obfuscate the intent, tap into our anxieties, and nevertheless tell a story of our time. I choose some.

THE COUNTRY IS IN SAFE HANDS

So speak the strongmen, here and anywhere, and their legion is growing, in democracies and the grey zones beyond. Some of the most obvious ones are autocrats, like a Putin or an Erdog˘an, busy creating their own mythologies as the safest hands in homelands scarred by a bad history. They need the legitimacy of a doctored democracy—which their apologists would say is preferable to free-for-all versions—to play the ruler-deliverer, always tapping into grievances of the past. The ‘safe hands’ of India, it must be said, do have democratic legitimacy. They reach out to the people in a manner set by the Constitution; and their legend is built on the assumption that we are still paying for the sins of weaker hands of the day before. Safe hands announce the masculinity of hope, the action heroism of the ruler. The safe hands of India, we have been consistently reminded, are the cleanest ones too, and this is certainly a big deal in a country where the traditional political hand stands for the entitlements of power. Safe hands also bring out the vulnerabilities of the country they promise to protect in the face of extra-territorial adversity. The strongman, the action hero, alone can make the country stronger—and safer. It is powerful imagery in the politics of stronger-the-leader-safer- the-nation. It overwhelms India today, for better or worse.

I’LL NOT LET THE COUNTRY BOW DOWN

They won’t, ever, for the strongmen in power are alpha nationalists. They, in their self-portraits and the wall paintings by the awe-struck, are the arbiters of our present, the custodians of our future, and the most authentic restoration artists of our past. The so-called populist, the sorcerer of the mass mind in the post-revolution age, is a hyper-nationalist and a reborn nativist. Narendra Modi is not exactly one of them. He is not your textbook populist; his sense of the nation verges on the spiritual. The Prime Minister’s job, as he tells you, is to keep the nation’s head high. When his opponents attribute the expediency of realpolitik to what he considers his nationalist mission, he doesn’t project himself as a nationalist under attack. He stands there as the dutiful protector of a nation under attack—and he sees to it that no one misses the point: pitted against him are those who think patriotism is a milder form of jingoism. This is a portrait of the nationalist as warrior monk, still the only showstopper in Indian democracy.

Silly things are said when the rhetorical urge overcomes political realism. War is politics, war-speak is politics, and peace, too, is politics. It gets outrageously political only when don’t-politicise-it is uttered with sanctimonious detachment. Politics has an emotional quotient; so does history. When countries are under attack, or when the defender plays the no-nonsense nationalist, the political is inevitably emotional. It gets exploitative only when demagoguery creates a simulated oneness. We are not there yet, thankfully, but the holy smoke emanating from the grand alliance of doves is bad politics. Nationalists assume they alone can play the politics of resistance and retribution, though we are not sure.

From the other side of the border, someone aspires to be statesmanlike. The problem is the state, which has made terror a religion. No amount of ‘reasonable posturing’ can hide the fact that almost every other attack in the name of the Book since 9/11 has a connection with Islamabad. What it has internalised as an ‘insufficiently imagined’ state, as Salman Rushdie called it, continues to express itself in the only language it knows—and it’s not made of words.

WORDS still make all the
difference.