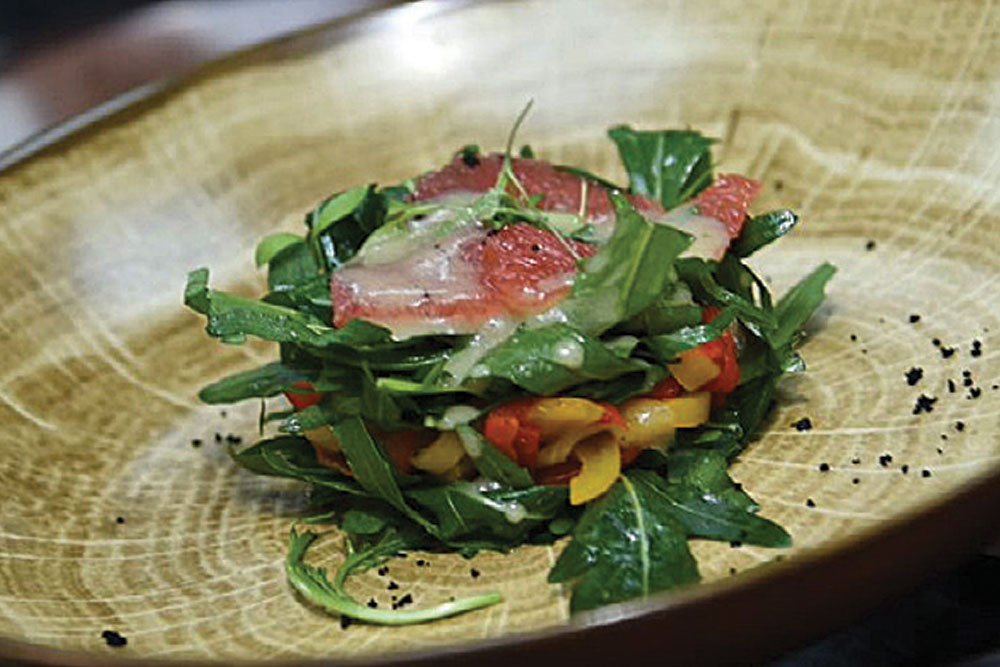 (I asked my soul,
What is Delhi?
It replied,
The world is the body,
Delhi its soul.)

IN MARCH 2020 WHEN we hunkered down for the lockdown, I was grateful we had our kitchens as an outlet for our creativity. By a fluke, I managed a few dishes, which met with the approval of my mother and our homegrown food critic Shahabuddin, our khansama, who is a veteran in traditional cooking. This gave me the confidence to explore the idea of a cook-out session with a Taj chef. With some help from Satyajeet Krishnan, North & General Manager, Taj Mahal Hotel, New Delhi, the deal was sealed.

Thus, on February 27th, an amateur cook in a 15×15-ft kitchen prepared a meal with Executive Chef Arun Sundararaj of Taj Mahal Hotel, New Delhi. In the course of that meal, one saw the wonders of Delhi, as a city and culture, which brings together everything from Mughlai cuisine to the most contemporary world cuisines. The experience provided me with an insider’s peek into what happens in a kitchen when 20 people are to be fed at six hours’ notice. I try to follow the advice of my mother, who is always pushing me to “perfect the art of cooking” by which she essentially means maintaining a culinary and aesthetic balance in the dish.

I have always been attracted to the drama of cooking grand dinners and laying elaborate tables. We grew up in a household where chairs were often added to our eight-seater dining table, and where food was never in shortage. Like my mother, I am able to handle hosting and feeding, and people easily, and without a frown. I read cookbooks, watch shows, but ultimately, I go my own way.


I’ve often been inspired by recipes from my all-time favourite Nuskha-e-Shahjahani from the kitchen of Shah Jahan. It is a record of dishes believed to have been prepared for the emperor in the 16th century. The manuscript features some exquisite recipes of breads, pulao, kebabs, bhartaas, etcetera. It is a book that food lovers must read. It also includes preparations of sweets, yogurts; and what we think only the French taught us — the colouring of butter and dough!

My creations arise from Amma’s recipes and notes from Nuskha-e-Shahjahani. Raan Peshawari —do pyaza style— and yakhani pulao were the highlights of the inaugural launch of Cooking-up-a-Tale, a 12-part curated culinary experience organised by the Taj. The antecedents of the Raan, according to a few food historians, probably go back to Central Asia, when nomads would roast legs of goat over their campfires. Under the Mughals and in other royal kitchens, it became more sophisticated and flavourful. It is now a delectable lamb leg dish, traditionally marinated overnight with yogurt, ginger-garlic paste, freshly ground cumin, fennel, red chillies along with other spices. It is then slow cooked with onions—two ways, and finished with a dollop of honey, soya sauce and rosemary before it goes onto the grill. The yakhani pulao is an authentic Persian rice dish cooked in a fragrant yakhani— a broth cooked with meat, yogurt and whole spices, mildly garnished with dry fruits, fried onions and saffron. The spread included butter-cooked sea bass, methi papad sabzi, ravioli and tiramisu.

I had the opportunity to cook with the legend, Chef Sundararaj, with whom I share a vision and creativity for cooking. He created magic in his demonstration of his signature contemporary salad, mushroom on the forest floor and a dessert with Greek sea salt.

The idea behind Cooking-up-a-Tale is to engage with small audiences so that hosts and eaters can have an immersive experience. The focus is entirely on the meal at hand. Politics and animosities have no place when one’s stomach and mind are content. Food brings us together. My guests that day were those who share my love for recipes, cooking and fine-dining. Given the sighs at the table, I’d say my lunch was an outstanding success.