The enduring mysteries of a city 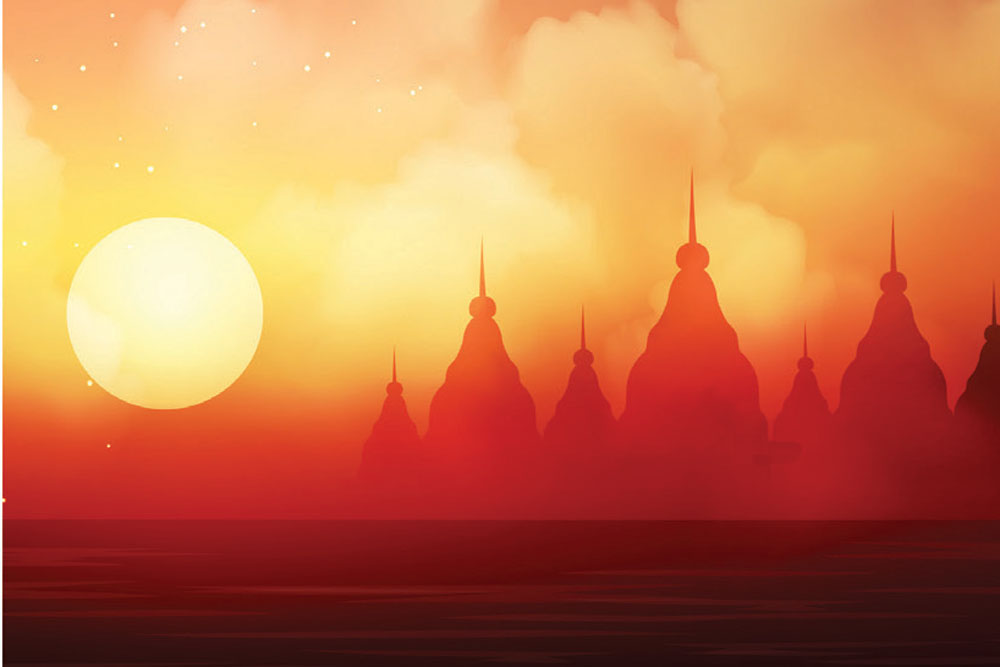 “O, beloved! Such is my divine city. It is most mysterious among everything that is mysterious. O Parvati! Brahma and the others do not know about its greatness. That is the reason this great kshetra is known as Avimukta [a place that grants emancipation (mukti)]. In bestowing emancipation, it is superior to Naimisha and everything else. Truth is the dharma of the Upanishads. Moksha is what Upanishads talk about. The learned know that the kshetra of Avimukta represents the essence of all tirthas and Upanishads. A being may enjoy many kinds of desire and engage in many activities for pleasure—as long as life is given up in Avimukta, it is said that there is liberation. It is better for a man to commit one thousand sins and become a pishachi than perform one thousand sacrifices and go to heaven, without having been to the city of Kashi. Therefore, every effort must be made to visit the city of Kashika [Kashi]. There, the sages meditate on Sadashiva in his unmanifest lingam. A man undertakes austerities for the sake of fruits. But it is actually I who bestow all those fruits on him.

People who give up their bodies here do not suffer from the bonds of karma. Having obtained sayuyjya with the paramatman, they subsequently obtain the desired destination. Brahma, along with devas and rishis, Vishnu, Surya, and the great-souled ones, worship me and no one else. A man may be addicted to material objects, or may not be interested in dharma. However, if he dies in this kshetra, he does not have to enter samsara again. What need be said of those without a sense of ownership, patient, based on sattva and devoid of insolence, those who do not begin anything without offering everything to me? After thousands of births, a person is born as a yogi. If he desires supreme emancipation, he should wish to die here. There are many lingams here, established by devotees. O Parvati! All of them yield objects of desire in this world, and emancipation thereafter. It is said that in four directions, this kshetra extends for five kroshas. When a being dies here, it bestows immortality. If a person who has not committed a sin dies here, he obtains emancipation instantly. If a person who has committed a sin dies here, he has to go through several bodies. He experiences those hardships and obtains emancipation subsequently.

If a man commits a sin in the kshetra known as Avimukta, it is certain that he has to go through pain for ten thousand years. It is only after he has enjoyed the consequences of the sin that he obtains emancipation. I have thus told you about those who are inclined towards wicked conduct. Knowing this, a man must properly serve Avimukta. Even in hundreds of crores of kalpas, the fruits of karma are not exhausted. The fruits of karma performed, good or bad, must be enjoyed. Exclusively wicked deeds in this world lead to hell. Exclusively good deeds lead to heaven. A mix of the two is said to lead to birth as a human. O Maheshvari! The sections on karmakanda [Karmakanda usually means rites and rituals, as opposed to jnanakanda, the pursuit of jnana] speak of three kinds of bonds of karma— sanchita, kriyamana and prarabdha [respectively, accumulated, ongoing and matured]. Everything accumulated across previous births is said to be sanchita. What this body is about to enjoy is spoken of as prarabdha. There are good and bad deeds that are being performed in this birth now. The learned know this as kriyamana. Prarabdha karma must be exhausted by enjoying the consequences. There is no other way. However, the other two kinds of karma can be destroyed through worship and other things. Other than in Kashi, all the kinds of karma cannot be destroyed. All the other tirthas are easy to reach. But the city of Kashi is extremely difficult to reach. If a person lovingly saw Kashi in a former life, then he can reach Kashi and die there in the present birth, not otherwise.

If a man reaches Kashi and bathes in Ganga, sanchita and kriyamana karma are destroyed. It is certain that prarabdha karma cannot be destroyed without enjoyment. One dies and is reborn. That is the way it is exhausted. If a person has visited Kashi in the past [This might mean a former life or the present life. The text doesn’t make it clear.] and has committed a sin thereafter, the seed is so strong that he is taken to Kashika again. All the sins are then reduced to ashes. Therefore, to destroy their roots, a man must certainly go to Kashi. If the residence is arranged for even a single brahmana in Kashi, that is like the benefactor himself dwelling in Kashi. Therefore, he obtains emancipation. If a person dies in Kashi, he does not have to undergo rebirth. If he dies in Prayaga, as fruits, he obtains everything that he desires. If both were to be available in Prayaga, there would be no gains from Kashi. If both were to be available in Kashi, there would be no gains from Tirtharaja [king of tirthas, a name for Prayaga].”

All this is being recounted by Suta to the sages in Naimisharanya. After speaking about the greatness of Kashi, he told them about Trayambakeshvara and there is a wonderful story (in the Shiva Purana) about Goutama.


All the other tirthas are easy to reach. But the city of Kashi is extremely difficult to reach. If a person lovingly saw Kashi in a former life, then he can reach Kashi and die there in the present birth, not otherwise

Suta said, “Hear about an account that destroys sins. I will tell you what I heard from my guru, Vyasa. In earlier times, there was a supreme rishi, famous under the name of Goutama. His wife was named Ahalya, and she was supremely devoted to dharma. In the southern direction, there is the mountain known as Brahmagiri [this has to be the one in Nashik district in Maharashtra]. For ten thousand years, he tormented himself through austerities there. On one occasion, there was a terrible drought that lasted for one hundred years. It brought misery to people. Not a single moist sprout could be seen anywhere on the surface of the earth. No water, required for living beings to sustain life, could be seen. Sages, humans, animals, birds and deer fled in ten directions. On seeing this, the rishis spent that extremely terrible time immersed in pranayama and dhyana.”

“For the sake of Varuna, Goutama himself engaged in auspicious austerities. For six months, he was immersed in pranayama. To bestow a boon, Varuna appeared before him and spoke the following words. “I am pleased with you. I will grant you a boon.” Goutama prayed for rain. At this, Varuna replied to the sage. Varuna said, “How can I oppose the command of the devas? You know everything. Please ask for something I can do for you.” Hearing these words, Goutama, who wished to do a good turn to others, replied, “O lord of the devas! If you are pleased and if I am to be given a boon, then you should give me what I have asked for. Since you are the lord of waters, you should give me water. It should be eternal and divine, such that it always yields fruits.” Thus, requested by Goutama, Varuna said, “Dig a pit here.” He dug a pit that was the length of a hand. Varuna filled this with divine water. After this, Varuna, the lord of waters, spoke to the sage Goutama. Varuna said, “O great sage! This water will be eternal and this place will become a tirtha. It will be famous on earth under your name.

Donations, oblations, austerities, sacrifices to gods and shraddhas for ancestors will all be inexhaustible, as long as they are performed here.” Saying this and praised by the maharshi, the deva vanished. Having been successful in helping others, the sage Goutama was happy. The nature of excellent people is that they cannot tolerate the miseries of others. They counter it for others, even if they have to go through hardship themselves. Trees, gold, sandalwood and sugarcane exist on earth only for the sake of others. The four sacred pillars that support the earth are a kindly person, a person not touched by insolence, a person who helps others and a person who has conquered his senses. Thus, Goutama obtained water, so very difficult to get. Following the norms, he performed nitya and naimittika karma. (Nitya karma consists of rites performed every day. Naimittika karma consists of rites performed on a special occasion and kamya karma consists of rites undertaken for desired fruits.) For the sake of oblations, the lord among sages sowed vrihi (paddy), barley, nivara (wild rice) and many other things. There were many kinds of grain and many kinds of trees. There were many flowers and fruits there. Hearing this, thousands of other rishis arrived there. Many animals, birds and other living beings also arrived. Since the water was perennial, there was no hardship on account of lack of rain. In the forest there, the rishis engaged in auspicious rites. Along with their disciples, wives and sons, many of them resided there. In the course of time, they sowed grain. Because of Goutama’s powers, that forest was filled with joy.”

I will continue with this interesting story in the next column.