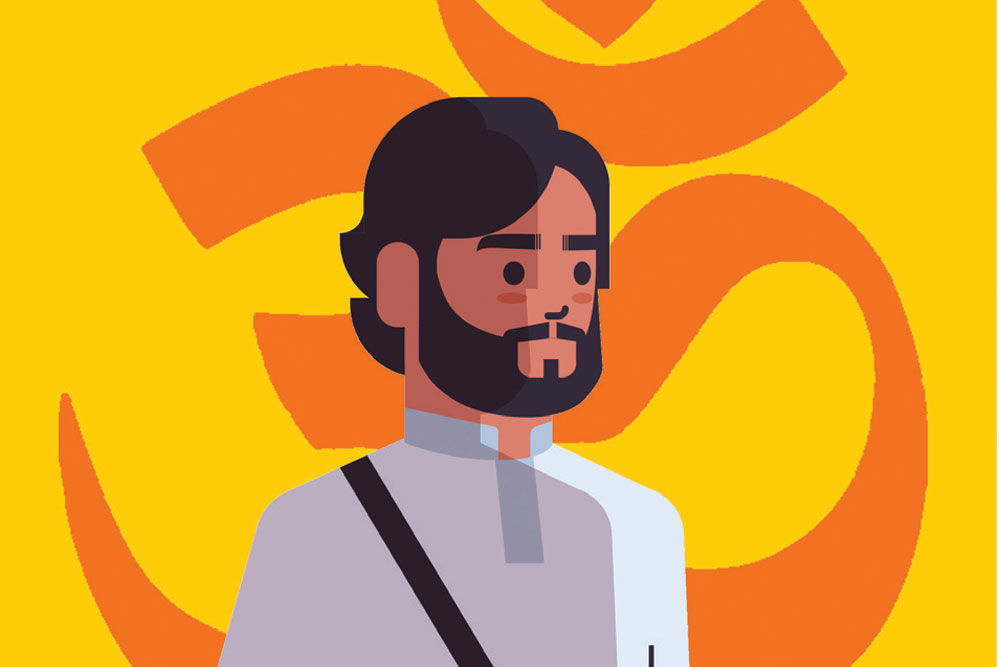 
Student: Our Svaraj Samvad, of which we have already seen two installments, now proceeds apace. Tell me how, in your opinion, India lost and regained?

Teacher: I’ll tell you by narrating how I stumbled upon some of these ideas. In fact, I have retrieved an early draft of these reflections dated December 17, 2000, written in a rather dirty guest room of the Maharashtra Board of Senior Secondary Education in Aurangabad.

Student: What were you doing there?

Teacher: I was invited to a seminar on ‘The Future of Tradition.’ My paper was scheduled on the last day, which I thought was a blessing because the truth is that I had no paper to speak of. Just some scribblings. But the seminar turned out to be quite stimulating, with sparkling presentations by eminent international scholars. To tell you the truth, I felt both abashed and frightened when I discovered some of the truths of medieval India. Abashed because I had none of the confidence of the dominant secularists, and frightened because what I had discovered felt so radical, so ahead of its time.

Student: Who was in power at the Centre then?

Teacher: I believe it was a Bharatiya Janata Party-led National Democratic Alliance (NDA) government, with Atal Bihari Vajpayee as the prime minister.

Student: Was there an attempt to change the discourse then, especially what happened to India in the so-called medieval period?

Teacher: Yes, there were what you may call rumblings. But no thunder. A strong section of the Indian intelligentsia has always been dissatisfied with how the plunder and ravaging of Indian civilisation have been kept under wraps, constantly airbrushed, sanitised, and concealed.

Student: Why are we so afraid of the truth?

Teacher: Because the truth can be devastating. Literally. Go to any museum in the world. There’s hardly an image of a Hindu, Buddhist, or Jain deity that is not disfigured. The vandalism was so massive that no cover-up is really possible.

Student: Yet, in the interests of communal harmony, the truth was hidden consistently?

Teacher: Yes, we can it denialism or negationism—the denial of facts and the negation of how this country was smashed and ruined.

Student: But didn’t all ancient civilisations suffer a similar fate?

Teacher: Indeed. Catherine Nixey in The Darkening Age: The Christian Destruction of the Classical World (2017) talks about how pagan Greece and Rome were destroyed by Christians. Centuries later, Christian conquistadors, authorised by the Church to seek new lands, also wreaked havoc on the native cultures of the New World—the Aztecs, the Mayas, and the Incas. All of this is well documented. Later, some of the great monuments of Christendom, especially in what came to be called the Byzantine Empire, were also devastated by Islamic armies led by the Arabs and Central Asians. Islamic armies also ransacked Christian Egypt, Syria, and parts of the Levant. Islamic armies held sway after the fall of Constantinople, demolishing or converting into mosques Christian places of worship in Turkey, Greece, Macedonia, Bulgaria, Albania, and other parts of Europe.

Student: Didn’t the Portuguese mount an inquisition in Goa, where unspeakable brutalities were carried out against the “heathen” Hindus, forcing many to convert?

Teacher: Yes. This is now written up quite extensively. But even earlier, Vasco da Gama was said to have tortured, killed, and converted many natives.

Student: Weren’t the revered saints of the Church, including St Francis Xavier, associated with these drives?

Teacher: St Xavier was said to have gone all the way to Malacca, which was Portuguese territory, on his Christianising mission. Legend has it that his coffin was carried over the waters back to Goa, with most of his body preserved miraculously. He lies in state at the Bom Jesus Basilica in Old Goa. As a matter of fact, even the famous Kapaleeswarar Temple in Mylapore, Chennai, was razed to the ground by the Portuguese, then rebuilt as we see it today.

Student: When it came to the ancient world, what the Christians spared or could not reach, the Muslims finished?

Teacher: You could say that. But great Muslim cities such as Baghdad, where the Caliph ruled, as well as Aleppo and Damascus, were destroyed in turn by the invading Mongol armies. The so-called progress of history is also accompanied by so much wreckage and bloodshed. Closer to our times, communist China under Mao destroyed many Buddhist, Daoist, and Confucian shrines, temples, and monasteries in Mainland China itself as a part of the Cultural Revolution.

Student: Besides, of course, the conquest, annexation, and genocide in Tibet?

Teacher: Absolutely. It’s still going on in Xinjiang with the Uyghurs, isn’t it? Monotheistic modernity, of which communism is but another version, should be added to those ideologies which cannot tolerate competing for ideological loyalties. The Soviets, for instance, de-Islamised much of Central Asia.


A strong section of the Indian intelligentsia has always been dissatisfied with how the plunder and ravaging of Indian civilisation have been kept under wraps, constantly airbrushed, sanitised, and concealed

Student: Are there more examples?

Teacher: There are more such depredations, but we’ve covered much of the spectrum of the old world, which was reduced to a heap of rubble. The important thing, though, is that the modern West is trying the change this. Even Rome is being rebuilt, with the ancient, pagan temples being restored and repaired.

Student: When did you discover all this?

Teacher: As I was saying to you, that visit in 2000 to Aurangabad, named after the last ‘great’ Mughal emperor, Aurangzeb, was such a revelation. Though I knew of much of this already through non-prescribed or heterodox reading.

Student: Aurangzeb is very much in the news now. When you went to Aurangabad, the city named after him, did you visit his grave?

Teacher: Yes, as it happens, visited his mazar!

Teacher: I’ll come back to it in greater detail later, but it’s a very plain grave in the Sufi necropolis of Khuldabad. What is amazing is that I found a tulsi plant sprouting out of the centre of the grave, which was also a sort of flower bed.

Student: And how would you interpret that?

Teacher: Bharat reclaims everyone, even those who try to break her back and raze her monuments to the ground.

Student: What were your memorable journeys, both physical and intellectual, during that trip?

Teacher: First, we went to Grishneshwar, the jyotirlinga near Aurangabad. Here, Shiva is worshipped as the lord of compassion. This is an ancient temple site, rebuilt in recent centuries by Ahilyabai Holkar.

Student: Rebuilt, did you say? Didn’t she also rebuild Kashi Vishwanath in Varanasi?

Teacher: Of course. She was so extraordinary and hardly given her due today. She restored or built temples all over India—from Srinagar in Kashmir to Rameshwaram in Tamil Nadu. Great temples in Kedarnath, Badrinath, Rishikesh, Haridwar, Prayag Raj, Kashi, Naimisharanya, Puri, Somnath, Ujjain, Nasik, Mahabaleshwar, Pune, Indore, Srisailam, Udipi, Gokarna, even in Kathmandu, were rebuilt or restored by her.

Teacher: It was probably Ala-ud-din Khilji’s commander, Malik Kafur. Kafur was a very interesting character in medieval Indian history. A good-looking boy called Manik was taken as a slave and castrated by the Khwaja of Khambhat, then sold to Ala-ud-Din Khilji. That he was called the highly flattering Alfi or “Hazar Dinari” by Ibn Batuta shows how prized he was. Nusrat Khan presented him to the Sultan, who, it is said, was instantly smitten by Kafur.

Kafur became the Sultan’s personal chamberlain, eventually rising to be his army commander. This ex-Hindu, on his conquering and looting spree, was given the title, Taj al-Din Izz al-Dawla, “crown of the faith, glory of the dynasty.” Among his notable achievements was that in 1306, he pushed back the invading Chagatai Mongols, who had reached the banks of the Ravi in Punjab.

Student: Sorry to interrupt. Did you say “Chagatai”?

Teacher: Yes, the Chagatais were a Mongol ruling clan, descended from Chagatai Khan, Genghis Khan’s second son. They ruled from Mongolia to the Aral Sea, which is actually a very large lake, bordering Kazakhstan and Uzbekistan. The notable Urdu writer, Ismat Chugtai, takes her surname from this clan whose armies Kafur repulsed.

Student: Malik Kafur caused the fall of the Hindu kingdom of Devagiri, didn’t he?

Teacher: Yes. Devagiri was ruled by Ramachandra. Kafur let him and his son continue for four years before annexing the kingdom altogether and renaming it Daulatabad. Later, Muhammed bin Tughlaq would try to shift his capital from Delhi to Daulatabad, killing off a large number of its inhabitants in his ill-fated move.

Student: Back to Kafur.

Teacher: Kafur led expeditions down into the deep south. After defeating the Yadavas of Devagiri (1308), he turned his attention to the Kakatiyas of Warangal (1310), then Hoysalas of Dvarasamudra (1311), and finally Pandyas of Madurai (1311). Everywhere, he collected fantastic amounts as tribute and loot from these expeditions, which were carried back to Delhi in a train of elephants. The fabled Golconda diamond, Kohinoor (mountain of light), which is now part of the British crown jewels, is one of them. Luckily, the Madurai Sultanate lasted for a very short time.

Student: Shall we talk about that next time?

Teacher: Sure. I’ll also tell you about Ajanta and Ellora, where I also went.