A devotee gets both worldly pleasure and emancipation 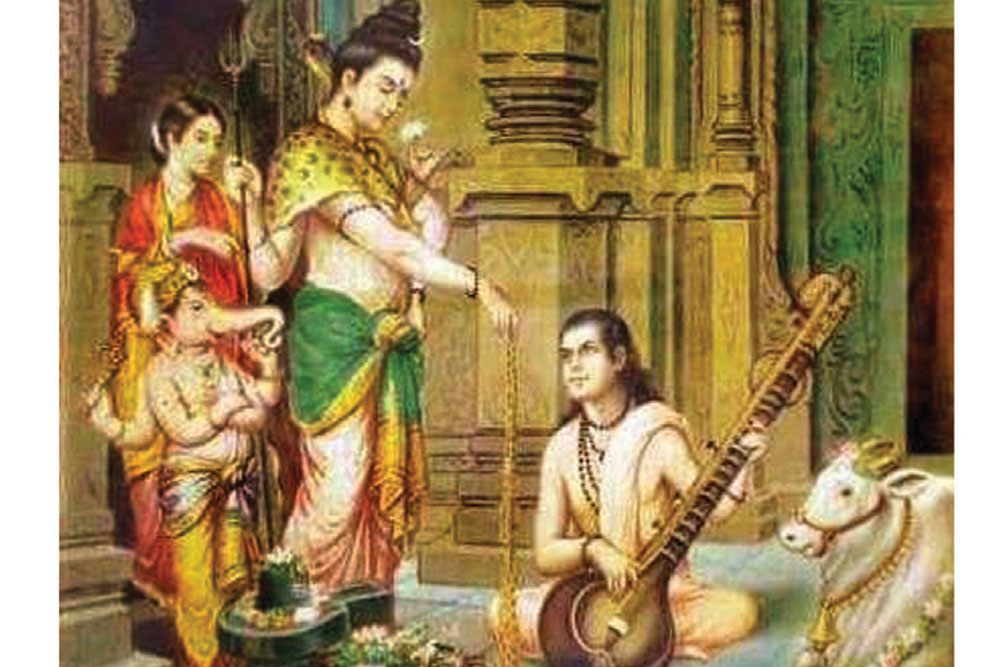 I WAS RECOUNTING A story from the Shiva Purana, about the wicked couple, Chanchula and Binduga, and left the story dangling and incomplete. The story is about how bhakti towards Shiva ensures emancipation. In this column, I will complete the story about the emancipation of the wicked wife, Chanchula. Binduga will have to wait for the next column. At the end of the last column, Chanchula had gone to Gokarna and had heard a learned Brāhmana tell stories from the Shiva Purana.

The Brāhmana said, ‘Hearing accounts from the Shiva Purana leads to non-attachment. It is good fortune that through Shiva’s great favours, your understanding has been awakened at the right time. O wife of a Brāhmana! Do not be afraid. Go and seek refuge with Shiva. Through Shiva’s favours, all your sins will instantly be destroyed. I will tell you something else that is full of Shiva’s deeds. That will lead you to a destination that brings every kind of happiness. Such intelligence only develops from listening to virtuous accounts. You are full of repentance. Thus purified, you are no longer attached towards material objects. The greatest atonement for sinners is repentance for the sins they have committed. All virtuous people have described this as the means for cleansing all sins. As instructed by virtuous people, if a person performs prayashchitta [atonement for sins] purified by repentance, all sins are purified. If a man makes up his mind to perform prayashchitta, he longer has any fear. There is no doubt that repentance generally conveys a person towards a desirable destination. Hearing the account of the Shiva Purana leads one to a purification of the mind that cannot be obtained through anything else. This is like a mirror being cleaned, so that it becomes sparkling. There is no doubt that this account purifies the mind like that. Shiva and Amba remain in the minds of men who have purified themselves. With atmans thus purified, they attain a supreme destination with Shiva and Amba. Therefore, for every type of individual, it is held that this account is the best mode. It is for this reason that Mahadeva himself devised this account. This account leads to the mind being immersed in dhyana on Girija’s husband, Parvati. Jñana is generated from dhyana and thereafter, there is certain kaivalya (emancipation). If a person listens to this account, but is unsuccessful in performing dhyana on Shankara, he accomplishes that dhyana in a subsequent birth and goes to a supreme destination with Shambhu. There are many sinners who have heard this account and have performed dhyana on Uma’s husband. Having tormented themselves, they have obtained success. Hearing this account is the most beneficial bija for men. (Bija means seed and is a mystic akshara or syllable from a mantra, known as bija mantra.) If one follows this path in the proper way, the bonds of worldly existence are destroyed. Hearing the account, fixing Shambhu in the mind and in the seat of the heart and purification of the consciousness are enough. That devotion towards Mahesha and his two sons (Ganesha and Kartikeya) certainly leads to divine favours. Therefore, there is no doubt about emancipation. In its absence, a person’s intelligence is bound to maya. He should be known as an animal. There is no doubt that he can never be freed from the bondage of samsara. O wife of a Brāhmana! Therefore, withdraw your mind from material objects. With your mind full of devotion, listen to Shambhu’s account. This is supremely purifying. Listen to this virtuous account about Shankara, the paramatman. With your consciousness thus purified, you will obtain emancipation. Meditate on Shiva’s lotus feet and your mind will become sparkling. I am telling you the truth. You will obtain emancipation in a single birth. This is the truth.’


Hearing the account of the Shiva Purana leads one to a purification of the mind that cannot be obtained through anything else. This is like a mirror being cleaned, so that it becomes sparkling

Suta (who is telling the story to the sages, Shaunaka being the most important of these) continued, ‘Having spoken to her in this way, the excellent Brāhmana turned his mind towards obtaining Shiva’s favours. He was silent and with a purified atman, became engaged in performing dhyana on Shiva. Binduga’s wife, Chanchula, was pleased in her mind. Addressed in this way by the Brāhmana, her eyes filled with tears. With a delighted mind, she fell down at the feet of that Indra among Brāhmana. She joined her hands in salutation and said, ‘I have obtained my objective.’ Rising up, she joined her hands in salutation and spoke, the words faltering. With her mind full on non-attachment, she addressed the Brāhmana who was Shiva’s great devotee, ‘O Brāhmana! O Shiva’s great devotee! O lord! You are blessed. You are the one who has seen the supreme destination. You are engaged in ensuring the welfare of others. You are described as an extremely virtuous person. Please save me. O virtuous one! I am descending into an ocean that is hell. I wish to hear you speak about Shiva Purana. In my mind, there is non-attachment about all material objects. Now, there is great devotion in my mind about listening to this Purana.’ Saying this, she joined her hands in salutation and obtained his favours. Desiring to hear about the Purana, she remained there, serving him. In that spot, the extremely intelligent Brāhmana, who was supreme among Shiva’s devotees, made the woman listen to the virtuous account about the Purana. In that great kshetra, she heard the excellent account about Shiva Purana from the excellent Brāhmana. The account enhances devotion, jñana and non-attachment and bestows emancipation. Hearing this virtuous and supreme account, she accomplished an excellent objective. Favoured by the compassion shown by a good guru, she swiftly obtained purity of consciousness. Through Shiva’s favours, she performed dhyana on Shambhu’s form. In this way, seeking refuge with a good guru, her mind turned towards Shiva. She repeatedly meditated on Shambu’s form, who is sacchidananda [the supreme brahman or paramatman, truth (alternatively existence), consciousness and bliss]. She always bathed in the water of the tirtha. She had matted hair and attired herself in bark. She smeared her limbs with ashes and wore a garland of rudraksha beads. She performed japa on Shiva’s name and controlled excessive speech and food. Following the path indicated by the guru, she satisfied Shiva. O Shaunaka! In this way, Chanchula performed excellent dhyana on Shambhu and a long period of time elapsed. She did this, full of the three kinds of devotion [hearing, chanting the name and meditating]. When the designated period was over, Chanchula voluntarily gave up her body. Sent by Tripurari [destroyer of Tripura, Shiva], a vimana swiftly arrived. It was adorned in many kinds of ways and was full of his many divine ganas [Shiva’s attendants]. Accompanied by Mahesha’s excellent attendants, she ascended it. Sparkling and with all the dirt removed, she was instantly conveyed to Shiva’s city. She assumed a divine form and her limbs were divine. She was resplendent, with celestial ornaments. She wore the half-moon on her crest and her complexion was fair [an allusion to Parvati being Gouri]. Having gone there, she saw the three-eyed Mahadeva. He is the eternal one and he was being served by Vishnu, Brahma and other devas. Full of devotion, Ganesha, Bhringi, Nandishvara, Virabhadra and others worshipped him. His radiance was like that of one crore suns. His throat was blue. He had five faces and three eyes. The moon was on his crest. Gouri, with a dazzle like that of lightning, was resplendent on his left side. He was as fair as camphor. Gouri’s lord wore every kind of ornament. His body was smeared with white ashes. Extremely resplendent, he was attired in a white garment. Seeing Shankara, the woman, Chanchula, was filled with delight. Filled with supreme joy, she repeatedly prostrated herself before him respectfully. Delighted, she joined her hands in salutation. She was humble, content and full of love. Her body hair stood up in delight and tears of joy flowed from her eyes. Full of compassion, Parvati and Shankara allowed her to approach. Because of her good fortune, she was able to see them. Parvati lovingly made her a divine companion. Chanchula, Binduga’s beloved, thus obtained celestial happiness. That eternal world is dazzling and full of supreme bliss. She obtained a permanent residence there and her mind was filled with joy.’

Anyone is bound to ask—What happened to Binduga? Did Chanchula forget her husband? Shaunaka said, ‘O Suta! O immensely fortunate one! Since your mind is immersed in Shiva, you are blessed. Having heard this wonderful account, our devotion has increased. Having gone there and having obtained an excellent destination, what did Chanchula do? Please tell us that. O immensely wise one! In particular, what about her husband?’ The answer will follow in the next column.

Two words are often used together: bhukti and mukti. Mukti is emancipation from the bonds of samsara, the bonds of birth, death and rebirth. Bhukti can only be translated as obtaining and enjoying objects of pleasure. Bhukti is about this world, mukti about the next world. Devotion towards Shiva ensures both.