Salman Rushdie and the dangers of raising difficult questions 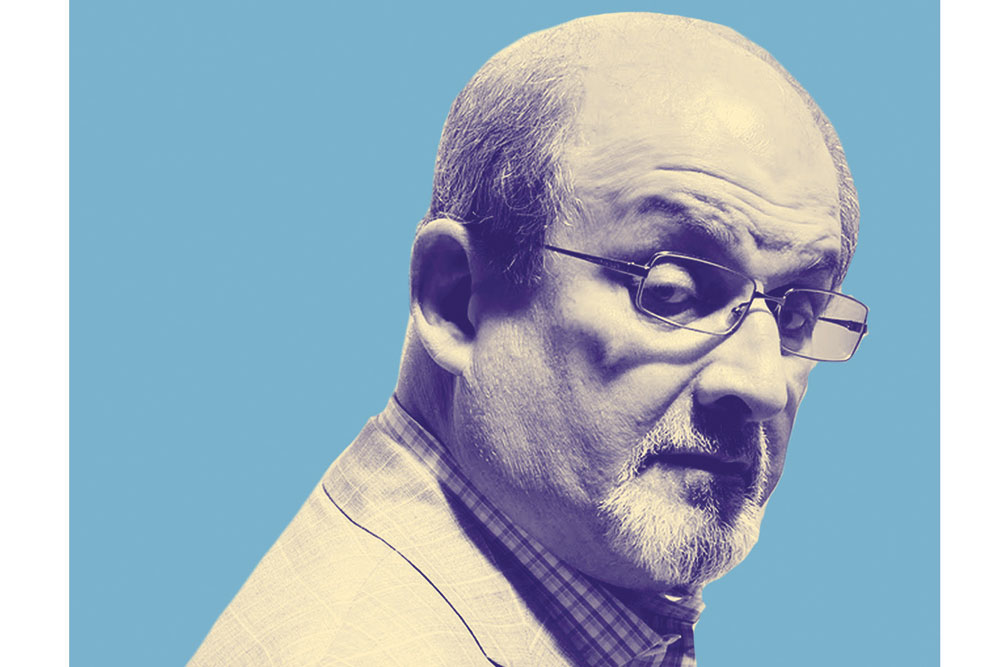 
IRAN IS IN TURMOIL. Protester deaths have been reported not only from its borders, but Tehran itself. Those interested in the unfolding unrest, even a possible regime change, are bound to wonder, “How does newness enter the world?” As more and more women dare to bare their heads in public, some even cutting off their hair as an act of protest or defiance, I cannot help but be reminded of this question which Salman Rushdie himself raised towards the end of Imaginary Homelands over 20 years back. The issue came alive once more after the brutal attack on the author which left him grievously injured.

Reflecting on The Satanic Verses, Rushdie had asked precisely this question, “How does newness enter the world?” In prophetic cultures, the avenue of the new is revelation. But by assaying into the forbidden realm of the counter-prophetic, Rushdie found that he had stirred more than merely a theological hornet’s nest—how do we know which of the verses of a holy book are truly God’s and which are the devil’s?

Unfortunately, raising such questions Rushdie realised was not permitted. Even ‘In Good Faith’, which was the title of his essay. Rushdie, instead, tried to defend his novel on grounds of fictionality. It is a work of imagination, he says, therefore must not be treated as an attack on any faith:

“At the centre of the storm stands a novel, a work of fiction, one that aspires to the condition of literature. The Satanic Verses has been described, and treated, as a work of bad history, as an anti-religious pamphlet, as the product of an international capitalist-Jewish conspiracy, as an act of murder (‘he has/ murdered our hearts’), as the product of a person comparable to Hitler and Attila the Hun. It felt impossible, amid such a hubbub, to insist on the fictionality of fiction.”

Even Rushdie, however, is compelled to acknowledge that writing novels is serious business:

“Let me be clear: I am not trying to say that The Satanic Verses is ‘only a novel’ and thus need not be taken seriously, even disputed with the utmost passion. I do not believe that novels are trivial matters. The ones I care most about are those which attempt radical reformulations of language, form and ideas, those that attempt to do what the word novel seems to insist upon: to see the world anew.”

Rushdie’s detractors do not wish to see the world anew. His anti-foundationalist enquiry can have only one outcome in the community of believers. Apostasy, blasphemy, profanity are punishable by death. What does it matter if they are disguised as fiction?

The enemies of free speech and critical thinking, the defenders of the faith, those that Rushdie himself had labelled “the apostles of purity, those who have claimed to possess a total explanation, have wrought havoc among mere mixed-up human beings.” (Imaginary Homelands, 394)—none of them are easily mollified, let alone forgiving.

Rushdie had fondly hoped that his Satanic Verses would be read as “a work of radical dissent and questioning and reimagining” (Ibid 393). He was profoundly mistaken. Published by Penguin Viking on September 26, 1988, the novel immediately ignited the wrath of the faithful. On October 5, 1988, India was, in fact, the first country to ban its import, fearing it would offend its minority Muslim population. Bans by many other countries, protests, book burnings, and protests across the world, soon followed.

Worse, on Valentine’s Day of the next year, February 14, 1989, Ayatollah Ruhollah Khomeini issued the fatwa sentencing to death not just Rushdie, but those associated with his book’s publication:

“I am informing all brave Muslims of the world that the author of The Satanic Verses, a text written, edited, and published against Islam, the Prophet of Islam, and the Qu’ran, along with all the editors and publishers aware of its contents, are condemned to death. I call on all valiant Muslims wherever they may be in the world to kill them without delay, so that no one will dare insult the sacred beliefs of Muslims henceforth. Whoever is killed in this cause will be a martyr, God Willing. Meanwhile, if someone has access to the author of the book but is incapable of carrying out the execution, he should inform the people so that [Rushdie] is punished for his actions.”

The fatwa still remains on the Iran Data Portal, an official governmental website .

A reward of a million dollars for executing the fatwa was announced by 15 Khordad Foundation, an Iranian state-funded religious charity for Islamic martyrs, which has recently been banned by the US. Later, the bounty was raised to $3.3 million. The UK broke off diplomatic relations with Iran, restoring them in 1998 only after Iran pledged that it would no longer encourage Rushdie’s assassination.

Ironically, although Rushdie’s book became a bestseller initially, he had to engage 24-hour armed guards to protect himself and his family. He moved 56 times in the first few months that followed the fatwa. His marriage with Marianne Wiggins broke up. Several failed assassination attempts ensued, even as the UK government moved to protect him attaxpayers’ expense.


Reflecting on his own (mis)adventures with the Satanic Verses, Rushdie had asked precisely this question, ‘how does newness enter the world?’ in prophetic cultures, the avenue of the new is revelation. But by assaying into the forbidden realm of the counter-prophetic, Rushdie found that he had stirred more than merely a theological hornet’s nest

But Rushdie’s Japanese translator, Hitoshi Igarashi, was not so fortunate. He was murdered on July 11, 1991, in Tokyo. On July 2, 1993, in the Sivas massacre, 37 people were burned to death in the siege and torching of Hotel Madimak. This was an assault by Sunni Islamist fundamentalists on the Pir Sultan Abdal festival, a religio-cultural gathering of Alevi Shias. The attackers were gunning for Aziz Nesin, a writer, satirist, and political activist, who had started translating The Satanic Verses into Turkish.

Sevcan Yilmaz, in his MA thesis, ‘Absence/Silence of a Translation as a Borderline Issue: Seytan Ayetleri’ quotes the angry mob of 15,000 as shouting “Death to Infidels” and “Aziz the Satan” before incinerating the building. The firemen who rescued Nesin started beating him when they were told who he was. The Sivas tragedy marked an important milestone in Turkey’s turn to Islamism. Nesin’s multi-volume autobiography, Istanbul Body (trans Joseph S Jacobson), was published by the University of Texas Press in three parts, 1977-1990; the concluding part was published from Utah by Southmoor Studios in 2000. The translation of The Satanic Verses, or Seytan Ayetleri in Turkish, was never completed, nor published. Rushdie’s novel was banned in some 21 countries and, after several bookstores were torched, taken off the shelves in many parts of the free world.

Less than a decade later, on September 11, 2001, Islamist terrorists hijacked four passenger planes, smashing two of them into the North and South Towers of the World Trade Centre, New York. The third plane was crashed into the Pentagon, while the fourth fell into a field in Pennsylvania. Nearly 3,000 people died, over 25,000 were injured and billions of dollars of damage resulted from these strikes by religious extremists.

Returning to his defence of The Satanic Verses, Rushdie further argues that his novel’s central theme is not in the so-called blasphemous passages against the Islamic religion or its prophet as his outraged critics allege. The Satanic Verses, according to Rushdie, is about something altogether different. It is actually migration, cultural mixing, and globalisation:

“If The Satanic Verses is anything, it is a migrant’s-eye view of the world. It is written from the very experience of uprooting, disjuncture and metamorphosis (slow or rapid, painful or pleasurable) that is the migrant condition, and from which, I believe, can be derived a metaphor for all humanity. The Satanic Verses celebrates hybridity, impurity, intermingling, the transformation that comes of new and unexpected combinations of human beings, cultures, ideas, politics, movies, songs. It rejoices in mongrelisation and fears the absolutism of the Pure.”

We are, Rushdie seems to suggest, always, already hybrid. Harking back to some pristine or unpolluted past, based on purity—whether racial, linguistic, ethnic, cultural, or religious— is a recipe for disaster. For Rushdie, this idea of the pure, the absolute, the exclusive, the sole, the selected, the perfect, the only, the holy, is not only dangerous but can turn murderous.