×
Columns | HISTORY OF THE PRESENT 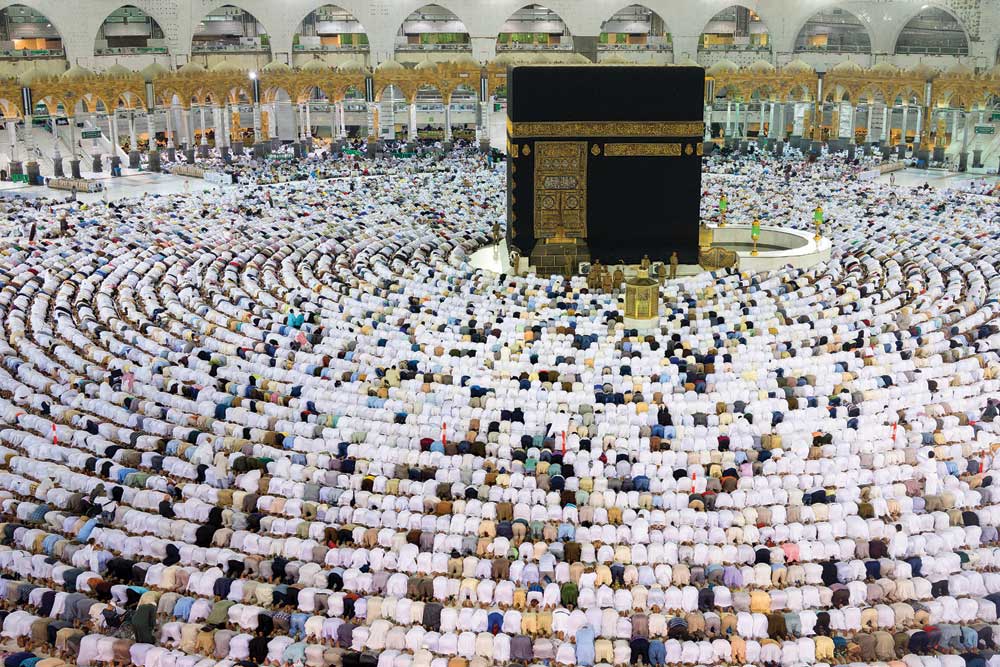 HAJ, THE WORLD’S biggest annual pilgrimage, is well-known as an Islamic commemoration of the Prophet Abraham’s unquestioning faith in Allah; but it is also a narrative of water and thirst. Haj means ‘setting out’ and comes in the twelfth month of the calendar, the Zul-Hijjah.

Two other faiths, Judaism and Christianity, are called Abrahamic, a tribute to the unique role played by the patriarch-prophet in the nurture of religion; but they have no equivalent of Haj. Abraham is as much a part of the Pentateuch as the Gospel and the Quran, but details of his doctrine and descendants differ. Judaism and Islam remain deeply committed to Abraham’s belief in the unity of God, or tawhid, while Christianity varied this when it evolved the doctrine of trinity, where God is one but shares divinity with Jesus and the Holy Spirit.

The Quran describes Abraham, born in the Babylon region of Iraq, as Khaliullah, or friend of Allah; Muslims believe he was among those who received revelations from God. He was known as Hanif, or the True One, for he proclaimed the singularity of God in the face of tyranny. He was thrown into a furnace, but saved by God. He went into exile, along with his wife Sarah, first to Palestine and then Egypt. His great regret was that he had no children, and prayed for a son to be born in the land of the righteous. Sarah had become too old to conceive and Ishmael, his first son, was born from Hajr. Sarah too conceived which was considered a further gift from God; his second son was Isaac. Arabs consider themselves the progeny of Ishmael, while Jews believe in Isaac as their prophet.

At this point the story becomes less divine and, well, more human. Sarah was so consumed by jealousy at the birth of Ishmael that she forced Abraham to expel them from their home. Abraham took them away, and left them in barren Baca, known as the Valley of Weeping, with some provisions.

When the food and water was finished, Hajr had no means of survival. She cried out to Allah for succour. With her baby at the edge of death, wailing for food and water, a frantic Hajr ran seven times between the mounds of Safa and Marwah, searching desperately for water. Unable to find anything, hearing her child cry, Hajr broke down. At this point the angel Gabriel came to her; Allah had heard the child’s cries and seen her pain. Lift the child, said Gabriel. When Hajr did so, she saw a crack in the earth, and a well of water in it. This was the spring of Zam Zam, sacrosanct in Islam. It has never run dry.

In a desert, birds find water instantly. A passing caravan saw birds wheeling over a spot, and knew there would be water. The caravan turned in that direction. Hajr received milk and food in return for water. A habitation grew around it. The valley became a place of rest and nurture. Mother and son survived; according to the Genesis in the Bible, Ishmael grew up to become a great archer.

The story continues. Ishmael had grown when Abraham, on one of his periodic visits, told him about a command from God: to build a mosque. Together they collected stones and built the cubic structure that is now familiar to the world as Kaaba, or Muqam-e-Ibrahim (Place of Abraham). When it was nearing completion, an angel brought a black stone, an irregular oval, about seven inches in diameter, which was placed in the south-eastern corner and is known as the Hajaru al-Aswad.


Water is a powerful symbol of Haj, the fifth fundamental pillar of Islam; the other four are belief in Allah and his last prophet, Muhammad; prayer, fasting during Ramadan and charity (zakat)

A later command was more ominous. As narrated in the Quran, Abraham saw a vision in which Allah ordered him to sacrifice Ishmael as proof of his loyalty. Once again, the son was ready to obey, even at the cost of his life. According to the Quran, Ishmael told Abraham, “O my father! Do as thou art commanded: thou will find me, if Allah so wills, one practising patience and constancy” [Surah 37:102].

Abraham drew a knife along Ishmael’s throat, but the knife did not cut. Yet again, divine intervention had saved Ishmael. An angel appeared with a ram from Paradise as the sacrifice to celebrate such faith. Every year, during Haj, or Id ul-Adha (known in India as Bakr-Id, or the Id of the Ram), this sacrifice is repeated in those Muslim households which can afford it. By Islamic tradition, this meat must be distributed to the poor and needy.

In Mecca, as part of the Haj ritual, every pilgrim runs seven times between Safa and Marwah in memory of a mother’s search for water for her child. A Quranic verse sanctifies these two mounds: “Behold! Safa and Marwah are among the symbols of Allah” [2:158]. Water from Zam Zam is still drunk. In addition, every day of every year, Muslims who visit Mecca for either the Haj, or Umra (outside the three-day Haj period), bring back millions of litres of their holy water in bottles and cans. Water is a powerful symbol of Haj, the fifth fundamental pillar of Islam; the other four are belief in Allah and his last Prophet, Muhammad; prayer; fasting during Ramadan and charity (zakat). Men and women pray together at the Kaaba, without distinction; they are equal before Allah.

Abraham’s plea, that the Kaaba should become a sacred sanctuary, was fulfilled, but not without interference from the vagaries of man. The guardians of his mosque changed; and its unique symbol as a house of monotheism was warped when, generations later, it became a home for gods from a variety of Graeco-Roman and more local beliefs and cultures. They included, according to Ziauddin Sardar’s fascinating book, Mecca: The Sacred City, Manaf, the sun god; Quzah, who held up the rainbow; Nasr, with the form of an eagle; and, from a more immediate pantheon, Al-Lat, the mother-goddess; Manat, the goddess of fate; and Al-Uzza, the goddess of love and beauty, who lived in trees. There are many tales about Manat, particularly after the Prophet Muhammad removed all idols from the Kaaba, but that is a different subject.

All Muslims turn towards the Kaaba to pray, but this was not always so. In the initial phase of Islam, Muslims turned towards Jerusalem. It was only later that the qiblah was changed to the Kaaba.

There were 2.4 million pilgrims during Haj alone in 2018; and an equal number went for Umrah. We can imagine the amount of water that must be taken from Zam Zam each year. Given such extraordinary demand, how is it that Zam Zam remains inexhaustible if it is only a spring?

More than a decade ago, during a conference on water hosted by Prince Hasan of Jordan in Amman, I met an engineer from one of the elite families of Mecca and asked him if there was a scientific explanation. He said that there was a time when the supply did seem to be ebbing, and a concerned government ordered a special team to investigate. The reason was unexceptional: sand was clogging the upward flow of water. But the team also discovered that Zam Zam was connected to an underground river. In other words, the water would never run dry. And if I wanted an explanation of the miracle that saved Hajr and Ishmael, he had that too. At some point long past, a geological tremor had cracked open the earth, creating the spring of Zam Zam from this river. I cannot vouch for these explanations. I pass on what I heard.