The Gyan Vaapi and Kashi Vishwanath 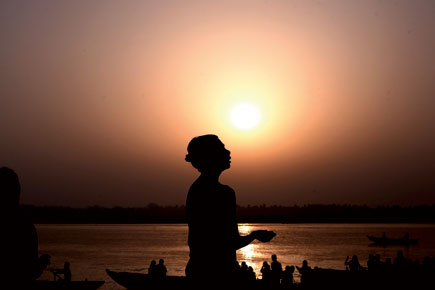 Lord Shiva as Kashi Vishwanath gives moksha for the dying, while His wife Shri Annapoorneshwari feeds the living in the timeless city of Kashi. The references to Kashi in the literature across time are numerous. The “city that shines”, or Kashyathe ithi Kashi is considered to be held on the trishul of Lord Shiva, and is not part of this earth as we know it. It is as a result of this that the city is free from the karma of the rest of the earth.

There are many ghats, or bathing areas with steps, leading down to the river Ganga, which flows right in front of the Kashi Vishwanath temple. Yet, it is the area between the Vaaran and Assi ghats that is considered to be the holiest of the holy. This gives this city the name “Varanasi”. Dying within this area guarantees moksha or salvation, which is freedom from the consequences of the accrued karma even of past lives. As a result, there are homes that serve as unofficial hospices. People check-in there to await their own death. It is fairly common to see extremely wealthy and famous people come and live incognito in this city, at intimations of their mortality. Their designer clothes and fancy gadgets get exchanged for simple cotton clothes and rudraksha bead (literally meaning Shiva’s eyes, as He shed tears when separated from His Shakthi) malas (necklaces). The beads are used to count the number of times prayers are recited.

Kashi Vishwanath is also one of the twelve jyotirlingas of India. One of the ancient names of Shiva in this city is Avimuktheshwara, or “one who will never leave the place.” Like other places of great antiquity in India, Kashi too has endured a chequered history. It is quite natural to expect that outsiders who attack an established kingdom or settlement would try to impose their own ideas on the defeated ones. For example, it was Indra, the rain god or the king of the devas, who received all the fire oblations, till a very firm Krishna changed that to worship of Mount Govardhan. This denotes a change from the wanderer to the agriculturist in ancient society. That Indra tried to drown Krishna’s clan by sending down a deluge and that Krishna saved his people by lifting up Mount Govardhan as a huge umbrella, is another story!

The conflict between the Shaivites and Vaishnavites is still prevalent. There are die-hard Vaishnavites who refuse to recognise Lord Ganesha, an easily identifiable divinity thanks to His unique elephant face. Ganapathini, the form of His female Shakti, is lesser known. It is pollyannaish to expect marauders and conquerors to respect and accept the systems and norms of the conquered. One of the ways of proving their superiority beyond the military one was to denigrate the local customs and force the beliefs of the conquerors onto the populace.

The actual vigraham, or idol of the Shri Kashi Vishwanath temple, is one that has gone through many tribulations at the hands of invaders. Yet, it is a matter of extreme pain that long after such invaders have left our shores, we as a people may have failed to do justice to the Shivalinga at Kashi. Hindus are derided as being idol worshippers. Any Hindu will aver that it is not an adult ‘toy’ worship that goes on in a temple. The image of the divinity is made in metal, wood, or mud. Elaborate and esoteric rituals invoke the divinity into this vigraham, which passes through many stages of consecration before it is considered fit to be worshiped. The daily pujas done on this vigraham enhance its powers. Ancient oral and written texts are clear that when the limitless, formless, divine is literally “reduced” so as to be contained in an image, certain mundane, human activities such as being awakened, or nirmalyam; bathing or abhishekam; and consuming food or naivedyam, are a must for the wellbeing of the deity, which in turn ensures the welfare of the devotees.

The Gyaan Vaapi has been sealed by a thick concrete slab. A small portion is open and a priest sits there, drawing out the water from the well in a small mug. For a fee, he is ready to do a puja for devotees with the water of the well. When questioned about the Shivalinga in the well by the writer, the priest visibly brightened up. He said that he cannot understand why such anyaay (wrongdoing) has been meted out to the submerged deity. He points out that the Mughals and the British have left the power to Indians. “What are we waiting for?”

The disputed site of the mosque/temple is not involved. Then what is holding back an effort at the recovery of the Shivalinga? Ennui? Or lack of ratification from a foreign architectural historian? To the priest, the silence on the issue is mystifying.

To the question as to where the Shivalinga can be placed if retrieved, the pundits are clear. A separate platform near the Gyan Vaapi can be made, and the older Shivalinga placed there. This is often called the Shri Moola Sthaanam, or the original place. It would then be mandatory to worship here first, before continuing on to the worship of the Kashi Vishwanath vigraham. There would be no confusion in having two power centres within the same temple.

According to Vastu Shastra, unused idols have to be buried if made of mud, clay, etcetera; cremated if made of wood; melted so that the shape changes if made out of metal. and then reused. This would, of course, be done only after the deconsecration of the vigrahams.

The effect of taking the Shivalinga out of the Gyan Vaapi well, should the idol be there, would be to immediately set right a wrong that has persisted for centuries. Seers are of the opinion that whoever causes this simple change will enhance the blessings of Shiva, not only in His beloved Kashi, but throughout the universe itself. The question which remains is whether inertia will hold its sway over action, as is often the case in this land where action and inaction run a neck-and-neck race for the future.