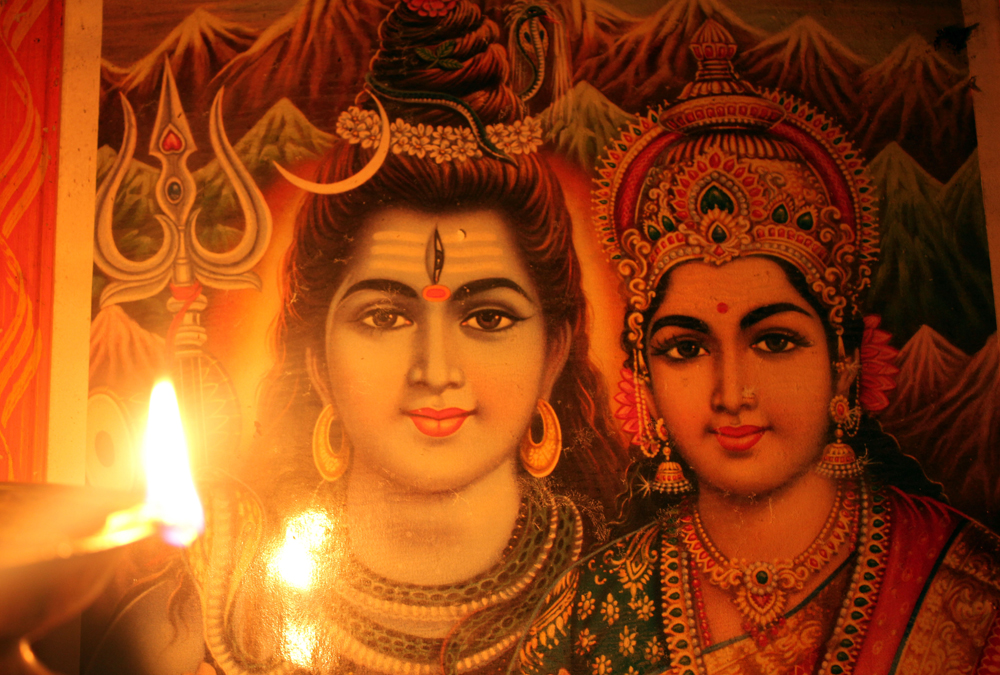 Vishnu is the most popular God of the Hindu Trinity. As the Preserver, He is supplicated for the fulfillment of most human desires. In His Poorna or complete Avatar as Krishna, He was a consummate manipulator, ensuring that the throne of Hastinapur went to His Pandava cousin at any cost. With Narayana in their corner (as opposed to the Narayani army that the opposing contenders, the Kauravas opted for) the Pandava victory was a foregone conclusion.

The earliest human beings worshipped what was evident to their five senses, which was nature. As human beings evolved from mere survival mode, myths, Puranas and stories, along with their less flamboyant cousin, philosophy came into being. Shiva had His genesis in the roaring God who leapt out of Brahma, the Creator’s brow. This Rudra (as He was called) went on to cut off Brahma’s fifth head, for the sin of eying His own progeny Saraswati, lasciviously.

Shiva is called Mahadeva, or the God of Gods. There are as many facets to this deity as are Gods in not only Hinduism, but the world over. He is a perfect Yogi and sits as an ascetic in the icy wastelands of the Himalayas. There He sits as immobile as the rock He sits on. The clouds that hug His head and body seem to be like the Vibhuthi or holy ash; He loves to smear Himself in.

The meaning of the word ‘Bhagavad ‘is literally that which has the power to completely contain everything in itself. It is only the Divinity that has this capability.

Shiva sits clad in the cold with a leopard skin wrapped carelessly around Him. As Digambara, or He who is clad in the whole universe, this is His being overdressed. To teach the bombastic sages (and their long suffering wives) a lesson in discipline, Shiva wanders around like a naked youth, seemingly unaware of His body. To attain the impossible is a heady aphrodisiac. The womenfolk of the sages desire Him with a passion rivalled only by the married Gopis of Vrindavan for their Krishna.

The Rudram, Namakam, Chamakam and many other hymns like Shri Aadi Shankara’s Shivaanandalahiri are addressed to Him. Yet as Bholaynath, a tumbler full of water on a piece of stone ensures the ever-pervading presence of Shiva which gives rise to the adage “Kankar mein Shankar” adage or Shiva in every stone.

Was it sliver moon shining on His Head that brings about the wild tides of Ganga as She flows to earth from His dreadlocks prison? Or did the river make the already unsteady moon go on His yo-yo diet, that adulterous and non-impartial Heavenly satellite finding refuge in Shiva?

Shiva adored His first wife Sati so much as to wait for Her to be reborn as Parvati and come to Him after such arduous penance that She rivalled Shiva’s own steadiness as an ascetic.

Shiva and Parvati have a delightfully domesticated relationship. She is an indivisible part of His body as Ardhanareeshwara. Yet, He has Ganga lurking on His Head, which makes Bhagavathi look at Ganga ‘Sa rosha‘ or with anger in the evocative lines of Shri Aadi Shankara’s “SoundaryaLahari”.

Parvathi has a son Ganesha, who is Vinayak, or He who is born without a father. Ganesha goes on to become one of the most popular of Gods in the Hindu pantheon.

One of the finest descriptions of Parvati’s love for Shiva is described when She waits for Him. It runs thus – “Like the Ganga Shiva bears on His Head, tears flow out of Her eyes. Like the waxing and waning moon He bears, Parvati experiences wild mood swings without Her Lord nearby. Did the poisonous snakes that are Shiva’s jewelry cut Her skin, so that She feels faint? Her heart thuds like His dumroo (drum) beats. She is pale as if the Vibhuti on Shiva has fallen all over Her. Truly, O Shiva, She is You.”

Kailasam, the mountain range in Tibet is universally acknowledged to be Shiva’s abode. Yet Kailasam has another meaning. In Tamil, a language that can match Sanskrit for its antiquity, Kailasam means that Divinity is available on each person’s palm – And that the all-pervading, kind-hearted Shiva most certainly is.