The aesthetics of Indian politics VI 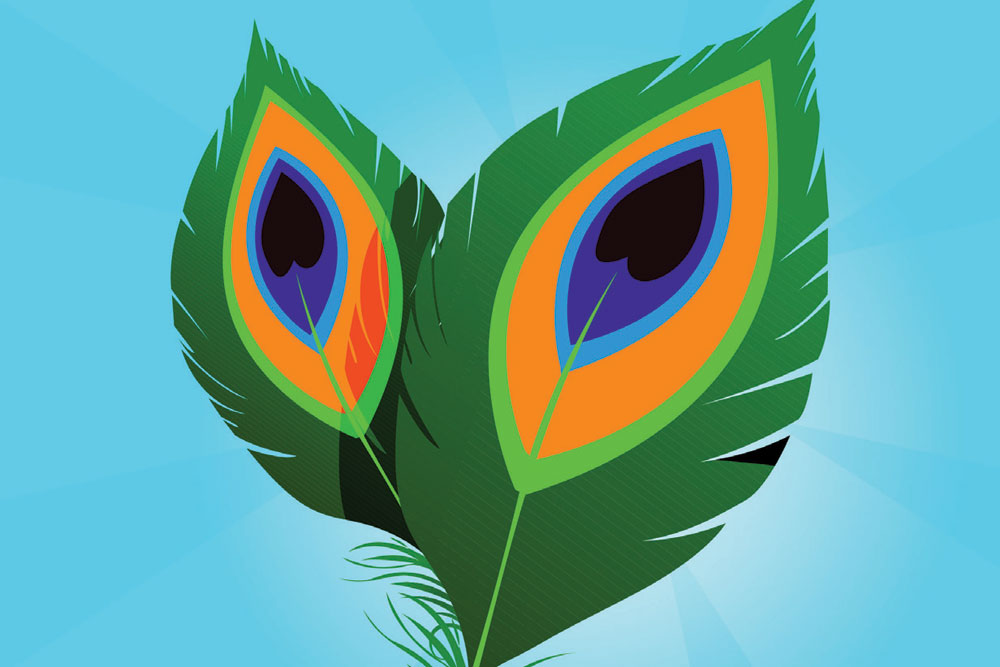 
IN THE SACRED geography and theology of India, Braj and bhakti are inextricably intertwined. Like Radha and Krishna.Yet in the older, more traditional, sources such as the Vishnu Purana and the Bhagvad Purana, Gokul does not refer to a specific place, but a cowherd’s village, where cattle stalls abound.

Similarly Braj or Vraja also meant pasture ground or a place where a herd of cattle grazed.Thus, FS Growse, in his celebrated Mathura: A District Memoir (1874) says, “‘Braj’ in the first instance means ‘a herd,’ from the root vraj ‘to go’… both Vraja and Gokula are used to denote, not the definite localities now bearing those names” (page 51).

How, then, did Brajbhumi or Brajmandal come to be identified with the “chaurasi kos parikrama equivalent to 20 yoganas” (roughly 300 km) on both sides of the Yamuna river in Uttar Pradesh, with Mathura-Vrindavan as its spiritual heart?

The scriptural basis is often sought in the most important and beloved text of Krishna worship, the Bhagavad Purana or the Shrimad Bhagavatam. According to Braj bhakti traditions, the first pilgrimage or Braja Yatra was performed by Uddhava, Krishna’s companion and disciple, when he brought Krishna’s message to the gopis (Bhagavatam, X 47.59): “Seeing the river, the forest, the mountain, its valleys and blossoming trees, the servant of Hari, Uddhava, took pleasure in evoking the memory of Krishna.”

But we know from a plethora of Vaishnava literature that the 84 kos parikrama (perimeter) was established by Vitthalnath, the son of Vallabhacharya, in the 16th century. In fact, according to the vartas composed in Braj Bhasha by the Vallabha sampradaya (sect), their founder was called to Braj Bhumi through a vision during the rainy months (shravan-bhadrapad) of 1555 CE.

He found none of the sites associated with Krishna, only wild and wooded areas on the banks of the Yamuna. But he identified ancient Gokul, where Krishna spent his infancy, by a chomkar or shami (Prosopis spicigera) tree on the eastern bank. The forest next to it, he said, corresponded to the legendary Madhuban, where Krishan had frolicked with Radha. To mark the site, Vallabha built a chabutara or sacred platform (see “Braj, Lost and Found” by Charlotte Vaudevilles in Indo-Iranian Journal, November/December 1976, pages 195-213).

But the rediscovery of Braj would not have been accomplished had it not been for Chaitanya Mahaprabhu. According to his biography, Chaitanyacharitamrita, he sent his two disciplines, Rupa Goswami and Sanatana Goswami, on a Braj Yatra even before he arrived there in 1516 CE.

That very year, Braj was invaded by Sikandar Lodi. The priests of the Gopal temple on the Govardhan Hill, reputedly established by Madhavendra Puri, had to shift the deity to Gantholi, a village nearby. Chaitanya spent three days in divine ecstasy in its precincts (see “Journey as Creation: Vrindavan” by Shrivatsa Goswami in India International Centre Quarterly, Winter 2003-Spring 2004, pages 198-214). After Gopal was re-established in his temple on the mount, Chaitanya completed his parikrama (circumambulation) of Govardhan.

At its northern boundary, he searched in vain for Radhakund and Shyamkund, the sacred tanks in Krishna lore. Not finding them, he rediscovered them in the paddy fields nearby. His disciples paid for the land and dredged out the mud, filling them with water. There they still exist, centres of fervent pilgrimage.

Afterwards, Chaitanya searched for Vrindavan, but it had vanished without a trace. Exhausted and sorely disappointed, he found himself at Akrura Ghat, on the banks of the Yamuna, on the verge of giving up hope. Chanting the name of Krishna and remembering his divine pastimes, he wandered about a deserted peninsula formed by the shifting course of the river. It was an overgrown wilderness, without a single temple, building, ghat or habitation. A place where the officers of the Lodis hunted wild pigs.

On a full moon night of the Rasa Purnima in the month of Kartik, sitting under a big kadamba tree, Chaitanya imagined the dance of Krishna with the gopis as described in the 10th skanda of the Bhagavatam. It was revealed to him that this was the very spot where the rasa lila had actually happened. Chaitanya, in the elevated mood of divine love, his heart overflowing with the rasa of bhakti, began to hug the trees and creepers, speak to denizens of the forest, feel the whole moondrenched nightscape as if animated by the spirit of Radha and Krishna. It was on that night that Vrindavan was recreated by Chaitanya through the fervour of bhakti rasa.

One might logically ask what happened to the earlier Braj and Vrindavan? Where had all the sacred sites mentioned in the Bhagavatam disappeared? There are historical accounts of a huge temple in Mathura destroyed by Aurangzeb in 1669.The French traveller and jewellery merchant, Jean-Baptiste Tavernier (1605– 1689), who visited that area in 1650, observed: “It is one of the most sumptuous edifices in all India… the building being very lofty and very magnificent” (Growse, page 82). Just 13 years later, French physician and traveller François Bernier called it “an ancient and magnificent pagan temple”. The temple described was reputedly built by the Bundela Raja Bir Singh Deo of Orchha. This suggests a history of repeated destruction and rebuilding in the region.


Right on the high road between Delhi and Agra, the two capitals of the Mughal empire, how did Chaitanya and his disciples conjure up and fabricate the temple city of Vrindavan? This was the miracle of devotional fervour, dedication and prema or love, not to mention shrewd diplomacy and effective negotiation

But why were there no other shrines when Vallabha and Chaitanya visited the area? What had happened to them? Why was the whole area taken over by riverside woodlands and forests? We know that Mahmud of Ghazni sacked the city later identified as Mathura during his ninth raid on India. His secretary, Al Utbi, in Tari’kh Yamini, records, “Orders were given that all the temples should be burnt with naphtha and fire, and levelled with the ground.”

The city was plundered for 20 days. Five huge idols of pure gold and a vast amount of jewels and treasure, estimated to be over Rs 30 lakh, fell into Mahmud’s hands. These had to be loaded on more than 100 camels. Over 5,000 Hindus were taken as slaves (Growse, pages 63-64). It would seem that the whole area had fallen into rack and ruin. Any temple that was rich or grand would have attracted looting and desecration. Without royal patronage and protection, Vrindavan had returned to nature, to the soil and trees of banks of the Yamuna.

The year of Chaitanya’s visit, the Sultan of Delhi, Sikandar Lodi (1458-1517), had laid waste to Mathura. Abdullah, a contemporary of Jahangir, describes Lodhi’s sacking of Mathura in Tarikh-i-Daudi:

“He was so zealous a Mussalman that he utterly destroyed many places of worship of the infidels and left not a single vestige remaining of them. He entirely ruined the shrines of Mathura, that mine of heathenism, and turned their principal temples into saraes and colleges. Their stone-images were given to butchers to serve them as meat-weight and all the Hindus in Mathura were strictly prohibited from shaving their heads and beards and performing their ablutions. He thus put an end to all the idolatrous rites of the infidels there” (Growse, pages 64-65).

Given this history of repeated despoilation and desecration, was it any surprise that what Vallabha and Chaitanya found when they visited was little more than an abandoned and derelict wilderness, overgrown with thorn and scrub?

Right on the high road between Delhi and Agra, the two capitals of the Mughal empire, how did Chaitanya and his disciples conjure up and fabricate the temple city of Vrindavan? This was the miracle of devotional fervour, dedication and prema or love, not to mention shrewd diplomacy and effective negotiation.

The Vaishnavas developed a complex theology and aesthetics of Krishna bhakti. They believed that the Lord’s body was constituted of sat (the real), chit (consciousness) and ananda (bliss). As the embodiment of the shringara rasa, Krishna attracts and uplifts the whole cosmos. Radha, as his power of pleasure, was pure prema or love (Shrivatsa Goswami, page 201).

The rediscovered and reconstructed Vrindavan was never destroyed. It is still flourishing and expanding. The pragmatics and poetics of prema and devotion thus overcame the politics of iconoclasm and plunder. In medieval India, it was the audacity and courage of bhakti that saved Indian civilisation. Of course, no history textbook will tell you this.