Can one be a Hindu, a Buddhist, a Jain and a Sikh at the same time? 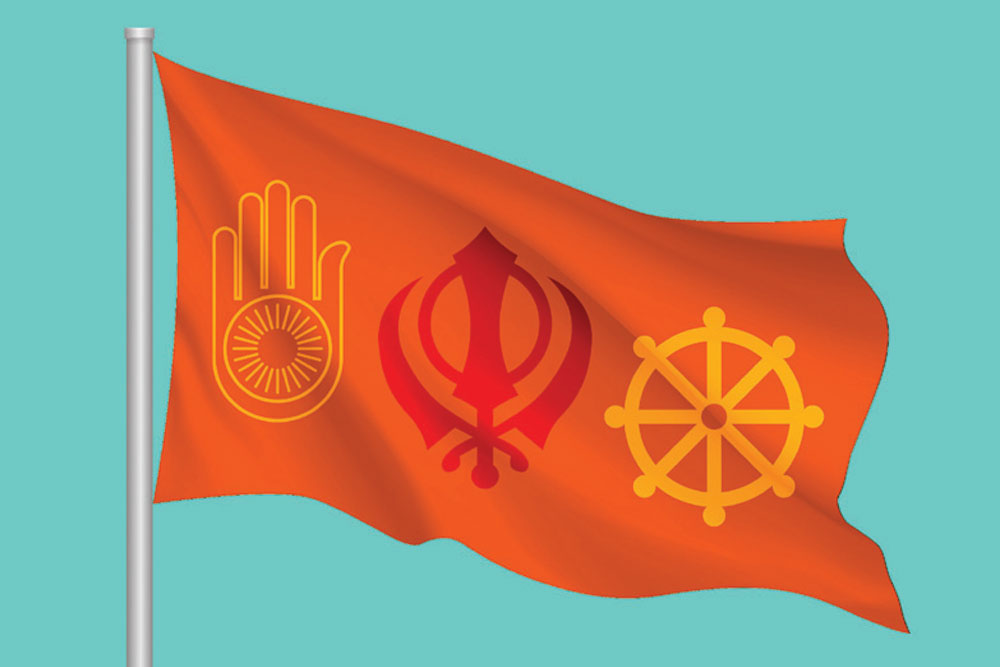 
A DISTINGUISHED READER OF Open recently commented that I should say more about the dis­tinction between religion and dharma. I do so now.

The two can be distinguished in many ways.

For me, the main point of distinction between the two rests on the nature and degree of commitment these terms involve to one’s religious tradition. It is almost redundant to say that the word “religion” comes to us from Western culture, but it is important to recognise this fact. The word “religion” is used in the West to describe such religions as Judaism, Christianity or Islam. In other words, these religions provide the proto-typical meaning of the word “religion”. The use of the word “religion”, in relation to these religions, carries with it the connotation of exclusive religious identity. In other words, although one can change one’s religion and a Jew can become a Christian, or a Christian a Muslim, and so on, one cannot be a Jew, a Christian, a Muslim at the same time. One should pause for a moment to consider the profound implication of this fact, given that all the three religions believe in one God and, therefore, presumably, in one and the same God. All of them refer to themselves as monotheisms. So even though all of them believe in the one and same God, yet one cannot be a Jew, a Christian and a Muslim at the same time.

The differences between the concepts of religion and dharma have been recognised by many, and quite a few observers have dwelt at length on the differences between the two. What has gone unnoticed is the implication the differences between these two concepts have on the way faiths relate to one another. The word “religion”, with its underlying implication that only one religion can be true, namely, the religion to which one belongs, because religions are mutually exclusive, carries with it the implication that other religions are false. This philosophical implication of the word “religion” is captured by philosopher David Hume as follows:“that, in matters of religion, whatever is different is contrary; and that it is impossible the religions of ancient Rome, of Turkey, of Siam, and of China, should all of them, be established on any solid foundation… every miracle, therefore, pretended to have been wrought in any of these religions (and all of them abound in miracles), as its direct scope is to establish the particular religion to which it is attributed; so has it the same force, the more indirectly, to overthrow every other system.” John Hick, the famous philosopher of religion, elaborates the point as follows: “By the same reasoning, any ground for believing a particular religion to be true must operate as a ground for believing every other religion to be false; accordingly, for any particular religion there will always be far more reason for believing it to be false than for believing it to be true.” Thus, according to religion each religion is proof of the falsity of the other. By contrast, as we shall soon see, according to dharma, each religion is proof of the validity of the other. This contrast becomes crystal-clear when we compare what Hume and Hick had to say in the matter with what Sarvepalli Radhakrishnan has to say about the matter: “If the Hindu chants the Vedas on the banks of the Ganges, if the Chinese meditates on the Analects, if the Japanese worships the image of Buddha, if the European is convinced of Christ’s mediatorship, if the Arab reads the Qur’ān in his mosque, and if the African bows down to a fetish, each one of them has exactly the same reason for his particular confidence. Each form of faith appeals in precisely the same way to the inner certitude and devotion of its followers. It is their deepest apprehension of God and God’s fullest revelation to them. The claim of any religion to validity is the fact that only through it have its followers become what they are.”

Let us now examine this point which I have just hinted at in more detail.

In the current discourse of world religions, there is a growing tendency to refer to the four religions of Indian origin, namely, Hinduism, Buddhism, Jainism and Sikhism, as dharmic religious traditions. One is now ready to raise the crucial question: Can one be a Hindu, a Buddhist, a Jain, and a Sikh at the same time? From the point of view of a Hindu, this is obviously possible, at least in our times. I know of Hindus who are practising Buddhists. The Dalai Lama, in a personal conversation with me, did not call himself a Hindu, but he did say that he was offering my Nalanda tradition back to me! I also know of a Jain leader, Acharya Susheel Kumar, who, upon meeting me, talked to me about his gotra after enquiring about mine. Even Khushwant Singh, who considered it a tragic fact that the greatest Sikh ruler, Rana Ranjit Singh, was a “Hindu” and is said to have died with the Bhagavad Gita on his chest, stated to me in a conversation that all Hindus could be considered sahajdhari Sikhs and all Sikhs could be considered keshdhari Hindus. I am not trying to make the claim that these traditions are not distinct; what I am trying to convey is that the degree of separateness, which the followers of these religions feel, is very different in texture from that displayed by the followers of Judaism, Christianity and Islam. It is interesting to consider, in the light of this, the fear of some Buddhists, Jains and Sikhs in contemporary India that the Hindus are out to assimilate them in the category of “Hindu”. The point, to contrast this situation with that of the Abrahamic faiths, is that what is feared is assimilation into Hinduism and not conversion to it. Fair-minded people will, of course, be opposed to both, forced assimilation and forced conversion. The dharmic religions do not proselytise, the Abrahamic religions (with the possible exception of Judaism) do so actively. This is another major point of difference between the two.

Did what I have just said smack of ecumenical fantasy, such as a Hindu academic might entertain in an ivory tower? The attempt to answer this question allows me to share some empirical data. In the Census carried out by the British in the Punjab, early in the 20th century, there was a category, for a few years, of “Hindu and/or Sikh”, as noted by the famous scholar of Sikhism from New Zealand, William Hewat McLeod. It is particularly revealing to consider the evidence from Nepal in this respect. We have it, on the authority of the German anthropologist Axel Michaels, that if you ask a Nepalese whether he was a Hindu, he would say yes, and if you again ask him if he was a Buddhist, he would also respond in the affirmative.

Michaels was so struck by this fact that he refers to it more than once in his book Hinduism: Past and Present. We should also be struck by this fact, because it enables us to impart a historical dimension to our discussion. Why is it that a Nepalese has no trouble with a dual religious identity, but that a Buddhist in India might hesitate in making such an affirmation? Is it because Nepal lay outside of the jurisdiction of British Census operations that the Abrahamic idea, that one can follow only one religion at a time, has become institutionalised in India but not Nepal?

It is even possible to suggest that the acceptance of multiple religious identity, or affiliation, or participation, may not be just an Indic but an Asian phenomenon. Surveys of religious affiliation in Japan, in our own times, repeatedly yield the following striking results: over 95 per cent of the Japanese declare themselves as followers of Shinto, and over 76 per cent of the same population also declare themselves to be Buddhist. China may seem like an exception to this phenomenon at this moment, but in pre-communist China, its religious landscape was often described by the Chinese as consisting of Confucianism, Daoism and Buddhism, which were collectively known as the “Three Teachings” (San Jiao), which were not considered mutually exclusive.

This point is confirmed by the fact that the major cultures of Asia had to coin a new word to translate the Western term “religion” into their own languages: the Japanese coined the word “Shu-Kyo”, the Chinese “Zongiao” and the Koreans “Jong-Gyu”. Indians did not coin a new word, but they coined a new meaning, and decided to use “dharma” in that sense, thereby narrowing its meaning.

A theoretical proposition was offered in the first part of this essay, and its empirical and historical confirmation in the second. One might reflect now on the policy implica­tion of the conclusions reached in this final part. If the dhar­mic traditions freely reflect the phenomenon of multiple re­ligious identity, then should this fact not be reflected in the Indian Census operations? Should not Indians be allowed to identify themselves as followers of more than one religion, if they consider themselves as such, rather than be asked to indicate only one religion? The purpose of a Census, after all, is to reflect reality, not to change it