Both sacred and material resources necessary to counter the pandemic 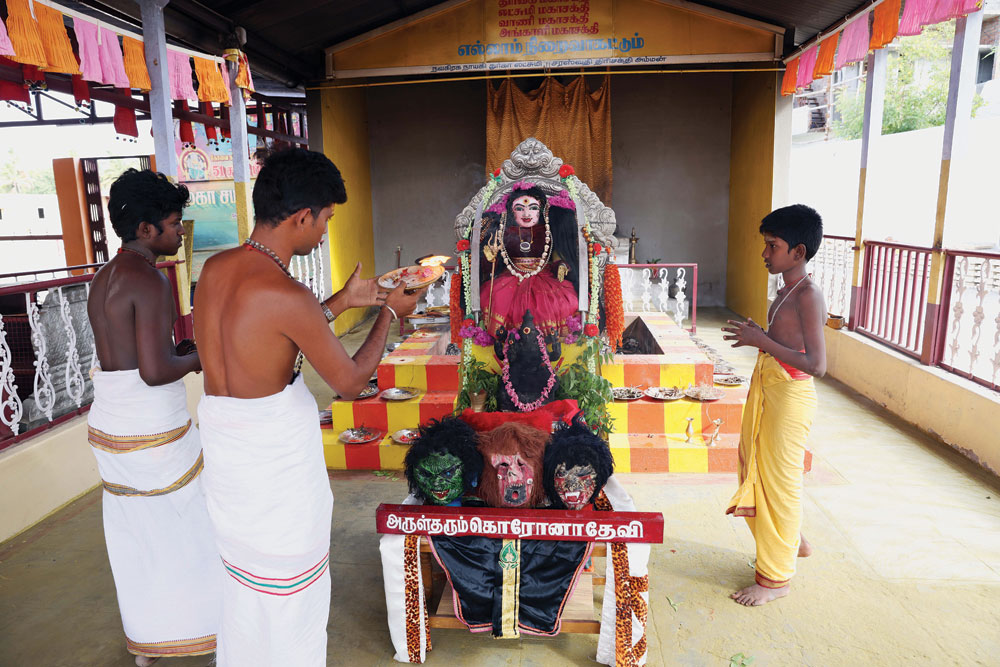 A priest performs aarti in front of the idol of ‘Corona Devi’ at the Kamatchipuri Adhinam temple in Coimbatore, May 19


When President Bill Clinton set forth on his first journey to India in 2000 to fill “a wide gap in his knowledge of the world,” he said that there were “only two kinds of people on this earth, those who have visited the Taj Mahal and those who have not visited it.” He added that the purpose of his visit to India was to cross the Rubicon from the side of the less fortunate to the side of the lucky ones. All humans must have wished to cross a formidable Rubicon in front to find new pastures beyond it. They may have been disappointed that the other side was not as sunny or bright as anticipated. Others may have been unable to gain enough strength to cross the Rubicon and stayed on their side in resignation.

Today, the world has been divided clearly into two sides without any power to prevent the crossing of the Rubicon from a relatively stable and prosperous side to the other afflicted with a virus whose course is indeterminate. Those who get blown away to the other side wish to return to the original place, but that is a hard task. Contrary to the historic crossing of the Rubicon by Julius Caesar, here it is an involuntary crossing which has a bearing on the course of human history.

Each one of us is like a soldier going into a fierce battlefield with bullets flying around. The soldier may survive the whole war and return home after seeing many of his comrades being carried away injured or dead. It may also happen that the proverbial bullet with his name on it might fell him with unknown consequences, depending on his destiny. This is why every war is a crime because people fight it in the name of the country, which does not benefit him or the country.

In the case of the pandemic, it is an invisible enemy that has created the battlefield, and humankind has no escape route. Survival depends on the possibility of the absence of a virus with the person’s name on it. Even if one is not hit by the virus, the fear makes life difficult for every human being. Gone are the days when there was a certain life expectancy which facilitated a normal life, but a new sense of insecurity has set in and there are new intimations of mortality. Nobody wins outright as the fear haunts you nevertheless. Those who have escaped infection are not liberated even if they give up many pleasures of life and observe Covid-19-appropriate behaviour.

Having fought the pandemic in various ways since March 2020, including taking both the doses of Covishield, wearing masks, washing hands and keeping a safe distance from fellow human beings, the unexpected arrival of the virus at my door led to a sense of defeat as my initial reaction. But the consoling thought was that escape from virus is a matter of pure chance as the science of the virus is still an enigma. Many years from now, science will reveal that there were other ways to deal with the virus that mankind was not aware of. Even the recently introduced Roche’s antibody cocktail, the “Trump Cocktail”, which is effective in preventing complications, is not very widely known. Much depends on many factors that determine the gravity of the attack when the virus is constantly mutating.

The novelty of reading about the experience of Covid-19 of others has faded as there have been many narratives around us. The first account of the experience was like that of a young foreign lady who delivered a baby behind the Russian Iron Curtain and earned enough to pay the hospital bills by writing about it in the London Times. Since then, many babies have been born behind the Iron Curtain without making news or money. I shall refrain from narrating my experience except to say the fear is worse than the reality, now that the vaccines are at least reducing the blow in most cases. Trust in science as we know it today and apply it to your best advantage. This generation cannot benefit from the future technologies that may perpetuate lives. Each epoch has its own curses and blessings, and we should suffer the curses and enjoy the blessings.

Much has been said about the frontline warriors against the coronavirus and the sacrifices they have made for nearly two years. They are the unsung heroes of the pandemic and the demands on them have only been increasing over time. To me, the worst tragedy is that they, who have once been the faces of assurance, comfort and charm when the patients were desperate, have literally lost their faces behind multiple masks and PPE kits. The proverbial Florence Nightingales with compassion writ large on their faces have disappeared from the hospital scene. Who will give those charming smiles and reassuring words to the patients? Living with PPE kits and masks may be another hazard of living with the coronavirus. The good thing is that though we do not see their faces, their sense of responsibility and compassion shine through the thick plastic.

The emergence of worship of Corona Devi in several villages in India has not been receiving much attention lately, but prayers in these makeshift temples may well have brought comfort to many in the middle of the pandemic. If only travel was easy, some could have gone visiting the small community of Sankt Corona, a lovely village up in the mountains near the Austrian capital, Vienna. A place popular with skiers, hikers and mountain bikers, St Corona has recently been attracting people who seek comfort in the Christian martyr the town is named after, now invoked as the patron saint of diseases and epidemics. “The holy Corona is standing near the holy of holies and she is helping us with our prayers, especially with pandemics, pests and dangers,” says the village priest. Whatever be the reason, the village has not had a single corona infection so far. The picture of a Corona goddess is also visible near the landmark plague memorial in the heart of Vienna. One thing is certain: we need all the divine and human resources to keep the second wave at bay and to prevent the third.