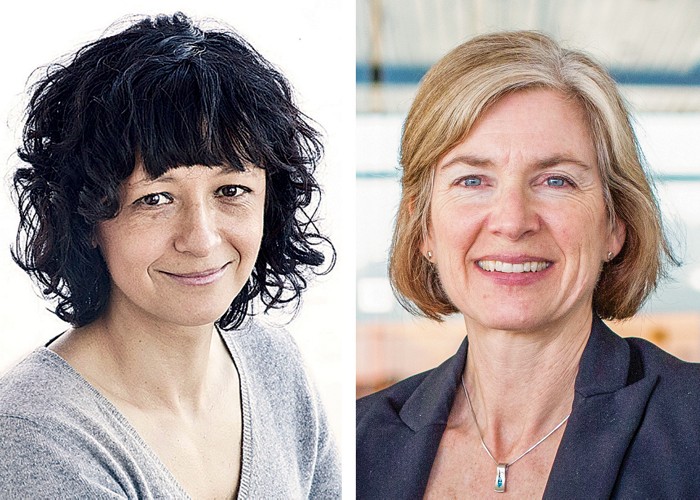 
This year’s Nobel Prize in Chemistry is important for a lot of reasons. It goes to two women, for the first time in history. It is for a revolutionary (some say doomsday) technology, CRISPR-Cas9, that can radically change the genetic structure of humans, animals and plants. And the way there have been Intellectual Property battles over it shows how scientists work in practice, far removed from the layman idea of pure, rational, intellectual effort.

To begin with, it is unfortunate that women scientists, as is true of women in other professions, do not get the kind of respect and kudos that their male counterparts get. There is an interesting hypothesis, for instance, that Albert Einstein’s pathbreaking relativity paper was co-written with his then-wife MilevaMaric, also a physicist, but that he gave her no credit. The celebrated Marie Curie remains an exception in this regard. So, it’s good to see two women being recognised.

The two biochemists, Jennifer Doudna of the University of California, Berkeley, and Emmanuelle Charpentier of the Max Planck Unit for the Science of Pathogens, Berlin, have created a mechanism to precisely edit and customise genes. This can be used to create new crops, or super-productive chickens, or new drugs, or engineered mosquitoes that cannot carry pathogens.

The idea behind CRISPR was first noted by Japanese scientists, and it was a Spanish scientist who named it the unwieldy ‘Clustered Regularly Interspaced Short Palindromic Repeats’.So there was a lot of collaborative work that went on in the background. But it was apparently Doudna and Charpentier who put it together in ways that made it easy to use, and they do acknowledge that they stood on the shoulders of giants.

In a way, the Intellectual Property issue here parallels the discovery of rapidly converging infinite series for pi and trigonometric functions by Madhava of Sangamagrama of the Kerala School of Mathematics in the 14th century. The simultaneous discovery by Newton and Leibniz of calculus, suggests Chandra Kant Raju, was because Madhava’s manuscripts were taken to Europe and facilitated the theoretical leap that laid the foundations of the Industrial Revolution.

What CRISPR-cas9 Can Do

In a nutshell, CRISPR-cas9 allows biologists to playgod. In a powerful and ominous essay, ‘Why the Future Doesn’t Need Us’ in Wired magazine in 2000, Bill Joy, a distinguished Silicon Valley computer scientist I was once privileged to work with, outlined a dystopian world in which robots, genetic engineering and nanotechnology could combine to make humans… redundant!

We get a glimpse of that world from the CRISPR-cas9 technique, perfected circa 2011, when the Nobel duo first started working together.

All sorts of possibilities exist. There was the Hitchhiker’s Guide to the Galaxy tale of a cow that was engineered to want to be eaten. More mundanely, square tomatoes were developed, and fish that glow in the dark. The dark side of the picture is genetically-engineered organisms (GMOs) that edge out naturally evolved cousins, and cause all sorts of problems. GMOs generally make people nervous.

The truly worrying thing about CRISPR-cas9 is that the changes made to genes will be inherited, so they persist through to the next generation, and on and on. Although it can be used to provide therapy to individuals (and there are possibilities with diseases, such as HIV, or even cancer), the most intriguing application is in (human) foetuses.

CRISPR can be used to create designer babies with desirable characteristics like intelligence, looks, athleticism, etcetera, and who are immune to inherited diseases. Embryos can also be endowed with super-human characteristics, such as the ability to develop gills to breathe underwater, or super-soldiers, as fantasised in countless science-fiction films.

This leads to obvious ethical questions. Most scientists do not wish to experiment with human embryos, but a Chinese scientist in 2018 did create genetically modified twin girls, to general alarm.

The technique is indeed quite remarkable. Doudna and Charpentier found a mechanism that bacteria use to defend themselves against viruses, that is, CRISPR, and it uses an enzyme called Cas9. By inserting bits of DNA from the virus into its own genome, a bacterium is able to develop RNA, and thereby, antibodies to identify and fend off the virus when the next is exposed to it. The scientists honed this technique to edit genes quite precisely, which has obvious applications. It has been compared to using ‘a scalpel’. So precise it is.

It is not the first gene-editing technique, but it is far superior to others that have come before, with names such as ZFNs and TALENS. Not only is CRISPR less expensive, it is also easy and reliable. A 2016 New York Times article quoted biologists who compared it to editing a movie, and suggested that it had so far never failed in its use in any plant or animal species.

Examples where it has been used include treatments for genetically-influenced diseases such as muscular dystrophy, HIV, cystic fibrosis, autism, and sickle cell anaemia; other candidates include Tay-Sachs disease and Huntington’s disease. It has also been used to create new crops like hardier oranges and new varieties of mushrooms.

The technique is not exactly standard Chemistry, and the prize could alternatively have been for Medicine, as a proxy for Biology. It is also not pure Science, but a Technology, with wide-ranging applications. It was evident from early on that it should be possible to make commercially viable products using licences to this technology, and several companies were formed, with hundreds of millions of dollars invested.

Partly as a result of the commercial possibilities, and partly from pure scientific rivalry, there has been a patent battle between Doudna and Charpentier on one side, and Feng Zhang, a researcher at the Broad Institute, associated with Harvard and MIT, on the other. The original Doudna/Charpentier patent only talked in general terms about eukaryotic cells, that is, cells with a nucleus. Zhang’s patent applied it specifically to humans and claimed that it was a novel and different use of the technique, not covered by the Doudna patent.

Zhang also used a US Patent Office shortcut, an Accelerated Examination Request, to speed up his application even though Doudna’s patent was in process, and his patent probably violated its prior art. In addition, there were changes in US patent law, whereby instead of the first inventor, the first applicant gets the patent. The net result was that Doudna/Charpentier lost the patent case to Zhang, despite having demonstrably invented the technique first.

They pursued a technical ‘Patent Interference’ appeal, but lost again. But the Nobel is a signal that the science establishment favours the Doudna/Charpentier duo. It also points out that the much-ballyhooed Intellectual Property mechanisms in the West can be manipulated and gamed if you have clever lawyers. Eternal vigilance is the watchword.

This patent struggle has lessons for Indian inventors. Something that is unique, novel and patented can have immense commercial value. Thus, it is important to get patent protection, not only in India, but also through the WIPO’s Patent Cooperation Treaty, in other countries. If they do this, they might be able to generate millions in licence fees. Major US universities make very large sums by licensing their research output (for example, Stanford owns Google’s original patents.)

Indian researchers should similarly monetise their valuable research output. The Sri Chitra Thirunal Institute in Thiruvananthapuram, for instance, licensed its patents for blood bags and for heart valves to companies that became commercially successful. Whether or not you win a Nobel Prize, commercialising your Intellectual Property is very satisfying.

Let us remember the case of Itty AchuthanKollat, a Kerala vaidya, and his two Konkan Bhat colleagues, who wrote the monumental Hortus Malabaricusin 12 volumes around 1690, an encyclopaedia of the medicinal plants of the Western Ghats. They asserted their IPR by writing it down, and it has enabled India in the 21st century to fend off bio-piracy, just like in the case of turmeric.

Unfortunately, the global IPR system is broken, and people try to game it, as seen in the CRISPR-cas9 case: it appears as though the original inventors did not get patent rights. Indians doing original research should be doubly vigilant about protecting their patent rights.

CRISPR-Cas9 is one of the most important technologies of this century. Along with AI/Machine Learning and Blockchains, it will change how we live. Unfortunately, India is nowhere in the picture in taking advantage of this leapfrog technology. China, on the other hand, is well on the way: it has attempted several times to create CRISPR-edited babies who had, for instance, resistance to the HIV virus.

The winners of the 2020 Chemistry Nobel have unleashed something remarkable, although there are genuine concerns about it: what are the unintended consequences? For instance, will CRISPR-cas9 cause damage elsewhere in the genome, other than the target site? What are the other side-effects?

It is also not entirely clear why CRISPR-cas9 has so far not been used successfully to fight off the coronavirus. Perhaps, there will be a breakthrough in Covid soon; in any case, we will be hearing a lot more about CRISPR-cas9 in the years to come.