Deconstructing the provocations and self-promotion of Zakir Naik 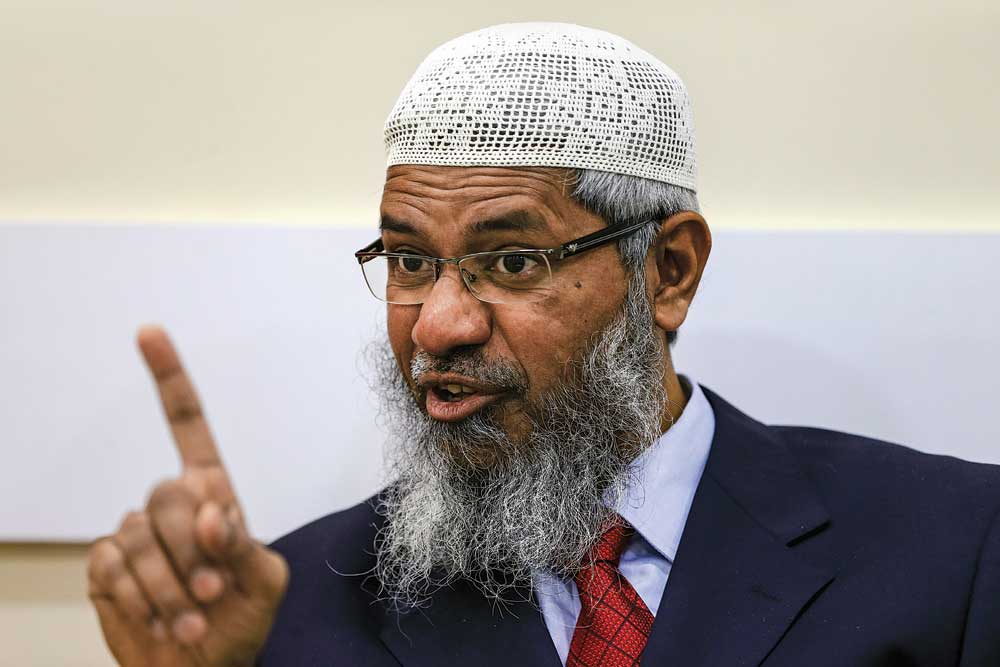 ZAKIR NAIK KEEPS finding his way into the headlines. Since 1st July, 2016, the date of a tragic terrorist attack in Bangladesh (the ‘bakery attack’), mainstream media outlets in India have run countless stories on the doctor-turned-televangelist from Mumbai and his multiple organisations. This heightened attention has been prompted, in part, by the Indian Government’s investigations into Naik after it came to light that one or more of the bakery attackers were fans of Naik and followers of his ministry. In November-December 2016, the crescendo of scrutiny reached its climax when the Indian authorities banned Naik’s Islamic Research Foundation (IRF) and shut down its official website. The Government also made moves against Naik’s Islamic International School (IIS). Since then, reporting has focused on Naik’s whereabouts (he seems to have remained in Saudi Arabia and Malaysia), and on the Government’s efforts to bring him back to India for questioning. It remains something of an open question, depending on one’s perspective, whether Naik has been the victim of an anti-Muslim witch-hunt (as Naik himself claims), or whether his bluff has finally been called.

This is not the first time a national government has taken action against Naik. Theresa May, then the British home minister, cited Naik’s controversial and repeated assertions on other religions, women, terrorism, Jews and Osama bin Laden, when she banned him from Britain in 2010. Canada soon followed suit. In recent months, reporters and editorialists in India and around the world have drawn the public’s attention to many of these assertions. .

As a historian and researcher, I recently completed a major study (forthcoming with Routledge) on the life of Naik and his brand of da‘wah (Islamic missionary activity). My work situates Naik in the contexts of broader Islamic history and the history of modern India. I first became interested in Naik because of an intuition that a critical study of the ‘Naik phenomenon’ could yield fresh insights into modern Islam. I have not been disappointed. Whatever one makes of Naik personally, his career as a self-taught global star of Islamic televangelism is a telling illustration of such dynamics as the democratisation of religious knowledge, the commoditisation of religion through mass media, and the fierce internal debates that characterise Muslim communities in India and around the world.

In thinking about Naik and the controversy he has engendered, several facts must be kept in mind. For one thing, Naik’s distinctive style of spreading Islam did not emerge in a vacuum. He came of age and honed his da‘wah techniques in Mumbai in the 80s and 90s, a context in which interreligious competition and anxieties over communal boundary maintenance were prominent aspects of society. Naik emerged as a leading practitioner of da‘wah in the early 1990s, the same period that witnessed the 1992-1993 Mumbai riots. Many Muslims in modern India (and elsewhere) remember these events and feel that they have continued to be targeted by aggressive conspiracies to undermine their faith and way of life. In such a situation, Naik’s rhetoric seems to find a ready audience.

Naik promotes not political or militant jihad, but what he calls the jihad of da‘wah. In this, Muslims should not harm or attack non-Muslims but should vigorously proselytise them using argumentation and persuasion

This does not mean, however, that Naik is universally loved by Muslims. His very first critics in India were not secular liberals or Hindu nationalists, but conservative Indian Sunnis and Shi‘ites. Scholars of the influential Deoband school, for instance, have consistently issued fatwas (legal rulings), discouraging Muslims from listening to Naik or consuming his da‘wah ‘products’. The scholars of Deoband say that Naik does not follow the orthodox Sunni schools of law, but arrogates to himself the right to read and interpret Islamic scripture for himself. This is indeed what Naik does. Meanwhile, many Muslims who are inclined towards Sufi spirituality and pluralistic coexistence find his brand of Islam distasteful and potentially harmful to India’s delicate interreligious balance. Naik’s Islam is not the traditional Sufi-inflected, Hanafi-based Sunni Islam of India. It is closer in spirit to the Salafi brand of Islam that prevails in modern Saudi Arabia. It is no coincidence that Naik was feted by Saudi Arabia with a prestigious award—the King Faisal International Prize—in 2015. Naik, in short, is a popular but also polarising figure in the Muslim world.

Second, from the early days of his da‘wah ministry, Naik’s preaching has overwhelmingly focused on what he calls ‘comparative religion’. He is chiefly concerned about making pious Muslims resistant to the allurements of other faiths. Though Naik also propagates Islam—or his version of it—through discourses on science, women’s rights and flaws of ‘the West’, comparative religion is his primary calling card. By using the language of ‘comparative religion’ (a respected academic discipline since the days of Max Müller in the 19th century), Naik is able to speak to the concerns of many Muslims who are faced not only with a highly competitive global religious marketplace, but also in many instances with political and social marginalisation. Quoting the scriptures of multiple religions from memory and speaking to adoring audiences from television sets, Naik seeks to demonstrate that Muslims can be confidently modern and confidently Muslim at the same time; that they can hold their own in the modern marketplace of religions and ideas.

Even more importantly, Naik’s focus on other religions provides a practical alternative to political activism or violent extremism. If one cannot realistically contest the political and social domination of non-Muslims (in contexts like India or Britain), one can at least contest their religions. This seems to be the thinking behind his modus operandi. In fact, he specifically promotes among his Muslim audiences not political or militant jihad, but what he calls the jihad of da‘wah. In this, Muslims, according to Naik, should not harm or attack non-Muslims—he is quite clear on this point—but should vigorously proselytise them using argumentation and persuasion. In light of this, it is not surprising that Naik has grafted himself onto a particular lineage of Islamic interreligious polemics which was initiated in India in the 19th century by Rahmatullah Kairanawi and continued in the 20th century by the South African polemicist, Ahmed Deedat. For Naik, as for Kairanawi and Deedat before him, the battle Islam faces in the modern world is not chiefly political but inter-religious. His preferred weapons in this battle are not physical, but technological and rhetorical.

Like a politician, Naik is deliberately provocative and hard to pin down because he wants to play to the hopes and fears of his Muslim audiences, but also maintain his ability to function freely in secular or ‘hostile’ political contexts

THIS, HOWEVER, IS ONLY part of the puzzle. While Naik focuses primarily on other religions and seemingly limits himself to the jihad of da‘wah, he sometimes addresses current affairs and contentious geo-political matters. Yet, at this point, a distinction is needed. While Naik does not hesitate to speak out against ‘the West’ and Western governments, he has rarely done so against the Indian or local Mumbai governments. He has also maintained a relatively soft public stance toward Hinduism. It should not be forgotten that Naik’s rise to prominence in the 1990s roughly coincides with the rise of the Shiv Sena in Maharashtra. Naik certainly dreams of the day when Islamic law will be the law of the land, but for the present, he pragmatically avoids local politics and treads carefully while discussing the dominant religion of India. Instead, he reserves his most combative postures for more distant or abstract rivals, like Christianity, Jews, ‘the media’ and ‘the West’.

It is in the context of discussing such rivals that Naik has made his most infamous assertions about Jews, women, terrorism, Osama bin Laden, etcetera. Yet, in such cases, Naik sandwiches his statements between so many provisos and qualifiers that it is hard to determine his precise meaning. When, for instance, Naik asserts that “every Muslim should be a terrorist”, he quickly qualifies this to mean that Muslims—through their scrupulous piety—should peacefully ‘terrorise’ anti-social elements. As the presence of a police officer may ‘terrorise’ a robber, so the presence of Muslims should ‘terrorise’ a watching world into obeying God. Like a politician, Naik is deliberately provocative and hard to pin down on such subjects because, in my view, he has two goals that stand in tension with each other: he wants to play to the hopes and fears of his Muslim audiences, but he also wants to maintain his ability to function freely in secular or ‘hostile’ political contexts. When Naik insists, therefore, that the media quotes him ‘out of context’, he is often technically correct.

At the same time, the tenor of Naik’s overall message is in keeping with a Salafi worldview. This worldview is strongly exclusivist in its belief that all who do not hold to ‘true Islam’—as defined by the Salafis—are bound for hell. Moreover, though framed in the language of ‘comparative religion’ and ‘dialogue’, Naik’s discourses sometimes caricature other religions. Yet, however repugnant some may find such words, in a society that values freedom of expression and of religion, it may well be hard to prove that they are illegal. Naik focuses on interreligious matters, preaches the jihad of da‘wah, and despite his ambiguous and sometimes inflammatory rhetoric, disavows the killing of innocent people. Based on my observations, therefore, I categorise Naik as a quietist (nonpolitical, non-militant) Salafi.

Of course, I speak only of Naik himself; driven by complex factors, it may well be that a handful of his fans have made or will make the leap from his quietist da‘wah-oriented Salafism to more militant strands. As for the question of whether a religious preacher can be held legally culpable for the actions of a handful of his or her fans and followers, I leave that to legal scholars.

A final point is closely related. If anything emerges from a study of Naik, it is that he is relentless in self-promotion. He tirelessly promotes his ‘brand’ through a variety of media. His YouTube channel, which has hundreds of his talks available for viewing, calls him a ‘world renowned orator on Islam and comparative religion’, and as of a few days ago, his official Facebook page had nearly 17 million likes. Seen in this light, the actions of the Indian Government and the media may unwittingly serve Naik’s broader agenda. Indeed, government and media scrutiny constitute a form of ‘free advertising’ which has only increased his name recognition. They also serve to confirm his oft-repeated claim that Islam is under siege by hostile governments and ‘the media.’ More importantly, they allow Naik to present himself as a martyr for the cause of Islam. Without prejudice to the details of the Government’s case, therefore, one wonders if the Government and media would have done better to simply starve Naik of the attention he seeks.