What Is Fuelling Anti-Indian Sentiment in the US?

Rage against the other 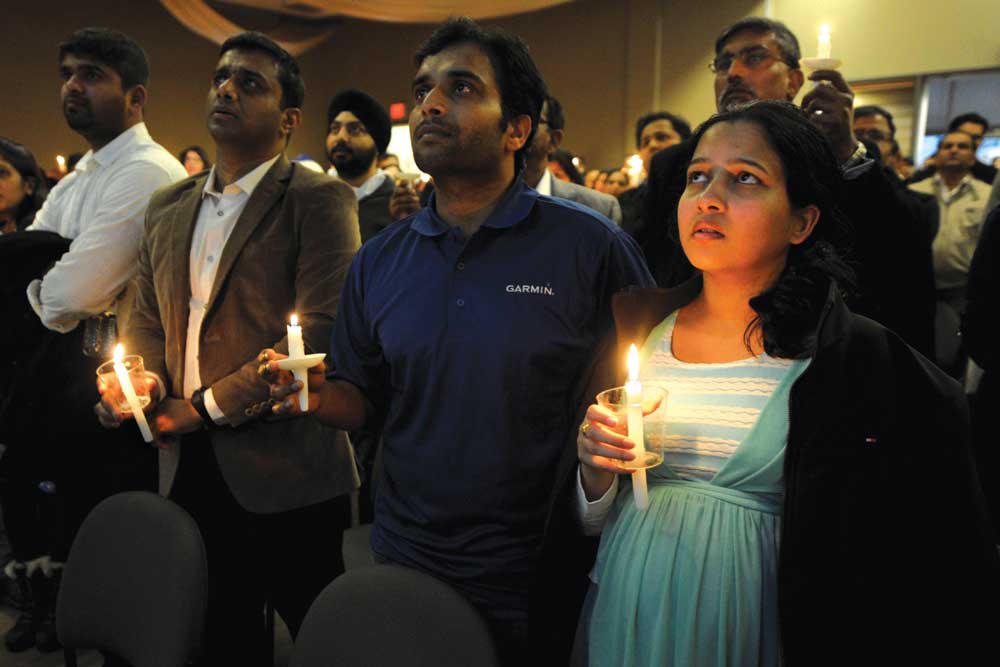 THE WHISKIES WERE a little suspicious, beer being the standard post-work drink for males in the US. The cigarettes would mark them as slightly foreign as well: most American professionals don’t smoke. Otherwise, Srinivas Kuchibhotla and Alok Madasani fit right in, an ordinary part of an ordinary scene—the smoking patio of Austins Bar and Grill, a sports bar in Olathe, Kansas, a town of 125,000 about 32 km southwest of Kansas City, Missouri. In fact, they were regulars; the staff reportedly thought of them as ‘the Jameson’s guys.’

Unfortunately, that’s not who everyone saw. A little after 7 pm on Wednesday, February 22nd, a drunk man started questioning them about their visa status. “They tried to tell him that they had done their [master’s degrees] in Kansas in 2006 and had been staying there with valid work permits,” a relative of one of the men told a reporter. He started shouting racist slurs at Kuchibhotla and Madasani, and making enough of a nuisance of himself that someone threw him out.

But the guy came back a few minutes later. He had covered his head in a grey and black scarf. Some people said he had military medals pinned on his white shirt. He walked up to the Jameson’s guys, shouted “Get out of my country,” and shot them both, killing the 32-year-old Kuchibhotla, injuring Madasani, 24, and also injuring Ian Grillot, a White 24-year-old who tried to stop him as he left.

The event seemed to come entirely out of the blue in the quiet, prosperous town. As Madasani told a BBC reporter, he’d never heard a racist comment in Olathe. Like nearby Overland Park, where Kuchibhotla and Madasani lived, Olathe is America at its best, home to Whites, Blacks, Hispanics, and a growing number of South Asians.Crime is low, people make good money, and most people are doing well: the average household earns $126,000 a year, nearly double the $70,000 national average. It is 85 per cent white-collar, well above the national average, and 45 per cent of adults have a Bachelor’s degree, compared to 21 per cent nationwide, according to Neighborhoodscout.com.

Immigration isn’t really a problem in Olathe either. The truth is that a lot of the town’s prosperity depends on people like the Jameson’s Guys, two of many Indian engineers who’ve built the city’s leading company, Garmin, a maker of Global Positioning hardware and software.

Kuchibhotla and Madasani were Telugu speakers from Hyderabad who came to the Kansas City area to pursue their Master’s degrees in the 2000s, and stayed back to work. Like a lot of America’s tech companies, Garmin itself is an immigrant success story. It began in 1989 as an acronymic partnership between an American and a Taiwanese engineer, Gary Burrell and Min Kao. The two started in 1989 in an office that consisted of two folding chairs and a card table, and over the next decade, built an enormous, globally listed company. Today, Garmin is a $9.7 billion business, part of which is housed in a 140,000 sq metres building on a 96-acre campus in Olathe. It employs 2,800 people in its local offices alone. When a 70,000-sq-metre addition is finished next year, the company plans to hire another 2,800 employees.

But that’s the objective reality, the kind that Garmin is good at navigating. More difficult to map is the shadowy landscape of rage and alternative facts where Adam Purinton, the man who shot Kuchibhotla and Madasani, seems to have lived.

Purinton is a registered Republican and a Navy veteran. Although he looks the part of the crazed hillbilly now, the role seems to be new to him. Purinton lived in a large house on a cul-de-sac of three-and-four-bedroom homes, some over 20 years old, seven or eight km away in Overland Park, with a view of a pond. The average list price of homes in his zip code is $621,000.

All over the country, Indians, Jews and other minorities have reported a sharp rise in hostile comments and aggression since November

Neighbours said he had gone downhill the past year and a half, since his father died. He was drinking heavily now, and was often drunk before noon, usually on beer. In recent years before his father’s death, the Wichita, Kansas, native had done some infotech work (in his LinkedIn profile, he describes himself as a desktop support specialist for Gen3ration, a Kansas City IT support agency that seems to have gone out of business). In the 90s, he worked for some time as an air traffic controller, a non-union job since the Reagan years that takes some training. In the late 80s, a year or two out of school, he had been in the US Navy.

It may just be blind chance that Purinton expressed his rage at two Indian engineers rather than a waitress serving him a warm beer or a counsellor at an unemployment office who couldn’t find him a job. In fact, he apparently didn’t know they were Indians: two hours later, when he wandered into an Applebee’s, a chain restaurant alongside the highway in Clinton, Missouri 80 km away, he told a waitress that he had killed Iranians.

However, the fact remains that police brought him in on a charge of shooting these particular men, and all over the country, Indians, Jews and other minorities have reported a sharp rise in hostile comments and aggression since November.

Even after the Olathe shooting, other Indians have been shot: Harnish Patel, a 43-year-old owner of a convenience store in Lancaster, South Carolina, who was killed outside his house on the evening of March 3rd; and on March 4th in Kent, a Seattle, Washington suburb, Deep Rai, a 39-year-old Indian man was told to “go back to his country” and then shot in the arm.

Prasad Kaipa, an executive coach and business advisor based in the San Francisco Bay Area, says he has not experienced any hostility personally, but when he asked Indian colleagues at lunch, many told him they had had a different experience.

‘I heard about how in an elementary school, a child came to Indian kid and told him to go back to his country,’ he wrote in an email. ‘When he complained to the teacher and the parent, the parent was not told what is being done about it in the school. He was told that it is confidential though his own child was affected by the hate speech. Another person narrated how they were told in the park by a random guy who came to them and told them to go back to their country in the past month.’

Even after the Olathe shooting, other Indians have been shot. On March 4th in Seattle, Deep Rai, a 39-year-old, was told to “go back to his country” and then shot in the arm

Where is all the rage coming from?

Jagdish Sheth, a Marketing professor at Emory University’s Goizueta Business School, says the Trump election has stirred up a lot of latent racism. “But this has been true in America for many decades. Ronald Reagan stirred up the same things in the late seventies and early eighties especially against Mexican migrant workers.” In the end, the roots of this kind of hostility are almost always economic, Sheth says. “Whenever there is an economic downturn, whether it’s in an emerging market or an advanced economy, minorities are targeted as a scapegoat.” The difference is that in the States, he says, people have guns. “We have such a large prevalence of gun ownership that it makes it easier for somebody to commit a violent crime,” he explains. Indeed, a recent survey by Fivethirtyeight.com, a data analysis site, found a clear correlation between hate crimes and income inequality. An analyst for the Southern Poverty Law Center, an advocacy group that tracks hate crime, explained the results this way: “It’s typically not your objective situation that makes you angry and resentful, but rather your situation relative to others you see around you,” said Mark Potok. “So, where income inequality is very high, so is anger and resentment against those ‘other’ people who you fear are doing better than you.”

Many Americans never quite recovered from the Great Recession, Sheth notes. After the housing bubble burst in 2007, they watched the value of their house decline along with their retirement account and their own economic value in the labour force.

A number of recent studies have found that there are a lot of frustrated, middle-aged White people like Purinton out there. A quarter of White men with only a high school diploma are now no longer working, and many aren’t even trying to find work, according to federal data.

This frustration has had consequences, the kind you can see etched in the face of Purinton, who though only 51, looks at least 10 years older. From 1978 to 1998, the mortality rate of US Whites fell by 2 per cent a year, according to a 2015 Princeton study. After that, death rates have begun to rise by 0.5 per cent a year, even as other country’s death rates continue to fall. The causes tended to be suicide or related to alcohol and drug abuse.

Professor Sheth believes this present wave of hostility against Indians will pass once the US economy picks up steam and both the stock market and the home market boom. “The negative impact on people’s desire to come to America due to current hostility will be only temporary,” he predicts. “I think the United States will be always attractive to immigrants,” he adds. “It is because it has structural flexibility to adjust and it is a great place to put your roots for the children and the grandchildren”.

In the short run however, some signs are troubling:

• Reuters has reported that the Trump administration has proposed re-orienting the government’s Countering Violent Extremism initiative to focus exclusively on countering radical Islamic extremism, away from the growing number of white supremacist groups.

• The administration has tended to be quite leisurely in the time it takes to comment on attacks they don’t associate with Muslim attackers. It took Trump six days to condemn the Olathe attack.

For Trump’s reality-show presidency, the show will go on, from lie to lie and tweet to tweet, concerned exclusively with its own spectacle. But outside the ‘waste wing’, in the sports bars, the driveways, and the convenience stores where real life continues, the Administration’s jeers and silences alike threaten to inspire more Purintons to pin on their old medals, grab their guns, and find in terror some redemption for their own squandered life.