While tiger numbers countrywide are encouraging, much more needs to be done 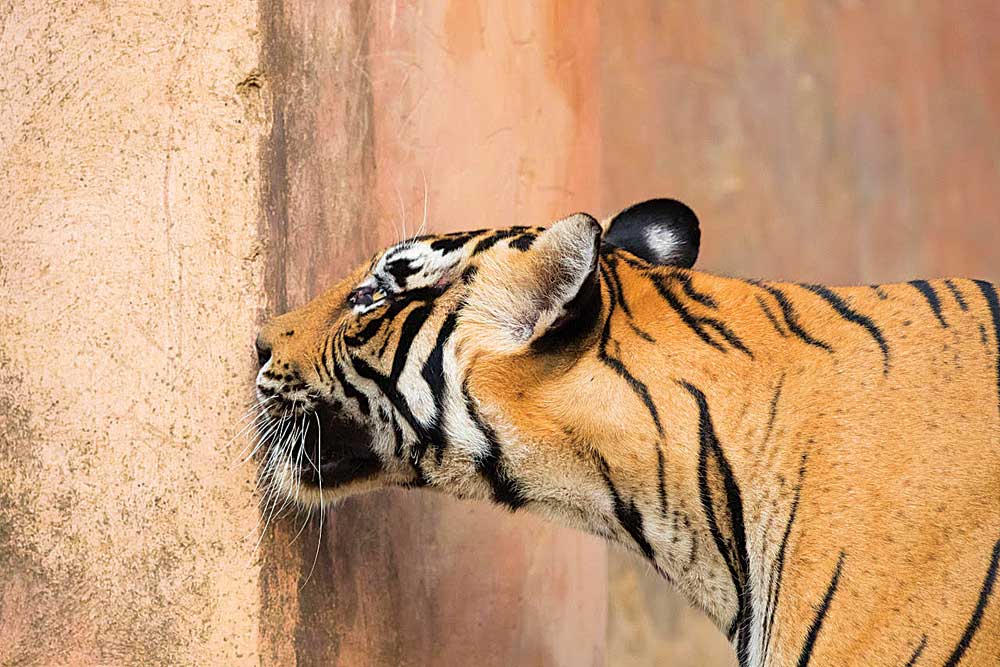 
SO, INDIA HAS 2,967 tigers in the wild today. Stupendously, the big cat has clambered from the very brink so to speak; from the now infamous low of 1,411 in 2006 when a National Tiger Emergency was declared by conservationists, media and the government. Even more incredibly, it has doubled its numbers from the 1,706 figure that we had declared in 2010 to the St Petersburg global summit on the tiger hosted by Vladimir Putin, then prime minister of Russia. India has got to the magic two-times figure, four years before the 2022 time frame set by those attending that meeting and before any one of the 13 range states have had time to blink. To say I am surprised that we have achieved the goal is mildly put. I was at St Petersburg and was the official representative of the Global Tiger Forum, the only inter-governmental agreement on the tiger, and also of the International Fund for Animal Welfare, an early NGO member of the Forum. It was a cold, bleak meeting. I wrote, sitting in the foyer of the hotel my early thoughts: ‘St Petersburg is as cold and grey in November as the Germans had found it during the siege of 1941. It is not that hostile though, as a certain Putinesque charm has made the city roll out its warmth and cheer for visiting tiger conservationists.’ The bleakness was not the lack of hospitality evidently but the chill of the situation that had necessitated the meeting. I wrote on. ‘The recent poaching escalation in India and Russia and a dramatic revision of numbers in both countries has meant the tiger is down to less than 3,500 worldwide and in imminent danger of extinction.’

The meeting itself had grandeur and gloss. Led by Putin, it had Wen Jiabao of China, Madhav Kumar Nepal of Nepal, Sheikh Hasina of Bangladesh and Bouasone Bouphavanh of Laos at the helm. Twelve ministers were in attendance. Leonardo di Caprio, Naomi Campbell and Preity Zinta provided the glamour. Black-suited Kremlin-types rubbed shoulders with conservationists in field jackets. India was conspicuously under-represented as both the Prime Minister and the Minister for Environment could not make it. There were just four or five Indians who did an admirable job of keeping the country’s flag flying high. SP Yadav of the National Tiger Conservation Authority and HS Negi from Kanha gave the Government’s point of view; Yadavendra Jhala of the Wildlife Institute of India gave the tiger numbers. I re-emphasised the need to address the capacity needs of the man in the field. It was clear that while political will has to be built top-down in some of our countries, capacity-building of the frontline field staff has to be bottom-up. And on the flight back, thinking of the Indian summit that the Indian Government was keen on hosting, I wrote again my thoughts: ‘India must look forward and beyond and have a serious consultation, scientific and management-led thinking out-of-the-box to save the tiger.

The conclave, if there is one, must get eminent thought leaders of conservation to come and present novel ideas to save the tiger. The Government should listen to them, eventually absorbing what is relevant and shelving that which is not feasible but doing so with an open mind and a large heart. Let this show not be one where we tout our own greatness. Let this be a time for the best in India and abroad to think of ground-level realities and convert the political goodwill of St Petersburg into an on-ground action plan. This will be the best advertisement of the new era of openness and urgency with which India is looking to save its national animal. And the best hope for the beast itself to roar well into the next century.’

Nine years have passed since the world leaders set an ambitious target of doubling tiger numbers in 12 years. On a muggy day in Delhi, a few days ago, Prime Minister Narendra Modi announced to a roomful of conservationists and forest officers that we have reached, nay exceeded, that number. Only a week ago, I was in that temple of tiger land, Ranthambore, watching a cat in its prime block our way by advancing straight at the jeep we were in. He walked unhurried and fearless onto our path and we retracted up a small slope, through a fort gate and beyond. Jai, the guide called him, for all the tigers in tourist areas are named and known as individuals, advanced within a tail-swipe distance of the jeep and pausing only to sniff at the fort walls for any tell-tale hormonal scents of its mates before ambling regally into the monsoon forest. We saw tigers every trip we made into the forest. And this was not even core tiger tourism area as we had made the trip off-peak in monsoon time. Around the country, conservationists and tourists alike are seeing more tigers today than five years ago; many more with three and four cubs and some with even five. They are seeing them where sightings were rare in the past like the Northeast, they are sighting them where they had declined calamitously in the past, like Valmiki in Bihar, and they are sighting them where there are no tiger reserves in place. Years of anti-poaching effort seems to have controlled what was breaking the tiger’s back—the trade in its bones. Years of tireless efforts by frontline forest guards led by dedicated officers, work of several technical and civil society tiger conservationists and hard-core scientists seem to have yielded results. I am ready, today, to believe that tigers have increased in number enough to set that global standard.


AND YET, THREE images from just last month cloud the undeniable joy of success. First, the image of the young tiger in central India climbing the barricades of a multi-lane highway that had torn into his natural route to find suitable territory and mate. A sub-adult cat has to move from his natal territory to a new one or face conflict with the territorial male at home. In nature, sub-adults fight for territory and some succumb, but the fittest find new forest to establish a place to call home. The image of the tiger clambering the metal railings to reach another patch of forest screamed of ill-planned underpasses paying lip service to the right of passage of the wild.

The second image was closer to where I was last month. Kaziranga and much of Assam had been covered by sheets of riverine fury; an annual deluge and one that causes much suffering to man and beast. An inundation, however, that causes the rich alluvial soil and grasslands of the park to be so productive in large herbivores. Nowhere in India can rhinos and elephants, wild buffaloes and swamp deer, the tiger and hog deer converge in such large numbers. And yet when the flood arrives the park submerges and animals look for highlands of Karbi Anglong to escape temporarily the rising waters. What blocks them is another National Highway and villages and farmlands. The image of a tiger seeking shelter on a village bed, for 10 hours, as forest guards and villagers waited for the animal to regain its strength was a media classic. The photos were taken on a phone by my colleague veterinarian who was ready for tranquilising the tiger if required. Beside the tiger was a cloth shopping bag for the household, ironically inscribed with the words ‘billion choices’. Did the beast have those choices, or was the bed the only refuge above water that it saw and occupied so regally?

The third image was the most painful. In Pilibhit, a lynch mob of villagers terrified at seeing a tiger that it thought was a man-eater, had set upon the beast caning it to death before authorities could reach it. I have seen in the past mobs baying for the blood of carnivores and the fury of humanity that have even sighted a big cat near their homesteads is to be seen to be believed. Tigers and leopards are driven more and more to human-dominated areas as forest fragments become smaller depriving them of enough prey, or when linkages to other forests become splintered by linear infrastructure, like roads and rail. Elephants kill 20 times as many people as tigers do but they do not eat their victims. The blood on the teeth of a rogue big cat drives panic and an untold terror into the hearts of those who have to share their backyards and their children’s home-scape with that of a large carnivore. At times, the tiger comes out the victor like in Kaziranga, and at times, a horrific loser such as in Pilibhit. But that is what terrifies me most of the success of tiger conservation in India.

Will we, in our quest of overtaking the Chinese economic juggernaut, have place in our land for two times tiger? Will we, as we inexorably claim top peak in human numbers, have the space for large carnivore numbers to increase even more? More critically, will we have space in our hearts for tigers and lions, leopards and elephants, which as they increase will demand their share of India’s static land mass? While we exult today, as we must, for setting a global standard for tiger conservation, let us temper the flavour of sweetness with the pragmatic tang of ecological wisdom. Three key ways forward are needed today. Our small-pocketed wildernesses must be connected with linkages that transform the several small into fewer, larger ecological units. These, once established, must be kept sacrosanct from human greed that destroys either wildlife itself or its habitat. Finally, the people of our country must be taken into full confidence for the price that needs to be paid for ecological well-being. The first two are ecological underpinnings without which the ability to maintain large populations of wildlife will become impossible. The third is a pragmatic stratagem in the absence of which the country will not get the nature that it deserves.

As Jai passes us, he snarls, just a little. His show of canines could just be the suppression of a morning yawn with which he greets the human pestilence in front of him. It could be the beginnings of a maw-enlarging flehmen response to a scent in the air that has just caught his fancy. Or it could be the show of what has fascinated and terrified the world in equal measure. Five inches of recurved, yellowing enamel bared in a no-holds-barred display of the top predator in the Indian jungles.