The trouble with trade talks, European attitudes towards the Modi dispensation, Christmas as a food festival and the rise of rightwing intellectual spaces 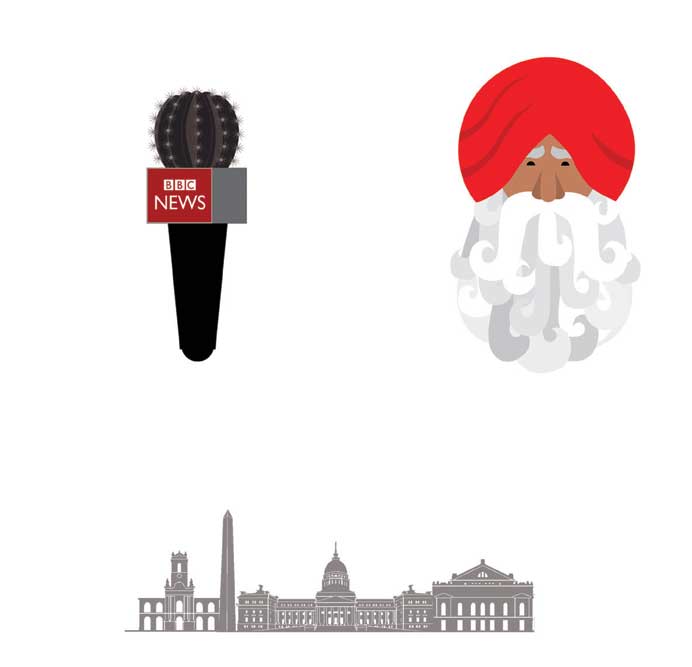 BUENOS AIRES IS a very long way to travel for just three nights. It almost seems like travelling from one jet lag to another, with bouts of untimely and deeply unsatisfactory sleep. But short trips are an occupational hazard of official business. I did a three-night trip to New York for a UN session in October and now an equally fleeting visit to Argentina for the WTO meet this month.

The WTO ministerial meet is a global jamboree. I wasn’t exactly part of the ministerial conference, but attended a two-day conference of parliamentarians held at the grand buildings of the Argentine Parliament. The grandeur of the buildings apart, what struck me most about the WTO deliberations was the sharp divide that existed between the so-called developed countries and the lesser developed countries.

Some of the schism is undoubtedly contrived. The developed countries themselves are sharply divided between those—like the United States—whose faith in a rule-based multilateral trading order has waned significantly, and those like the European Union that seeks to extend the boundaries of international trade even further. China is caught somewhere in the middle: it is the biggest beneficiary of globalisation but is content to allow others to shape the agenda. Somehow China likes to remain relatively invisible at these meetings. It is even content to be described as a developing country, although that is a serious misnomer.

The problem with Indian negotiating positions is that they’re grounded in an overdose of negativism. We know what we don’t want, but we aren’t exactly sure what we do want. I had to intervene in a debate on e-commerce where the Indian position of not-now was restated. I must say I wasn’t entirely convinced since there are obviously gains to be made by Indian companies in a globalised e-commerce regime. However, I do see the logic of our officials urging caution since the EU’s free trade evangelism comes with a lot of pre-conditions of what companies can and cannot do.

The EU has been very insistent on the WTO adopting a charter on women’s empowerment. On paper, that seems laudable and innocuous. But how do you translate women’s empowerment into trading rules? The EU would, ideally, like to stipulate a minimum number of women’s employees and even determine their conditions of work. In an ideal world, that is desirable, but in a competitive global environment, would it not blunt the competitive edge of Indian firms?

THE EU WAS, quite predictably, at the heart of the agenda during a one-night stopover in Brussels. The stay in Belgium, apart from shopping for chocolates, involved a dinner meeting with Members of the European Parliament and a talk on the Modi Agenda. My friends Anirban Ganguly of the SP Mookerjee Research Foundation and Sishir Bajoria of Kolkata were also with me.

There is phenomenal interest in Prime Minister Modi overseas. However, there are two parallel narratives at play.

In Brussels, I encountered MEPs, not least from the UK and Germany but also including representatives from Hungary and Slovakia, who were curious about demonetisation and the GST. They were anxious to know whether the big changes that Modi was trying to introduce were enduring. Would he succeed? Would India actually turn into a significant economic player? Would it acquire the muscle to be a foil to China? These are serious questions that have no ready-made answers. I don’t think the MEPs were looking for certitude. What they seemed anxious to understand and digest was the manner in which India approached its rise and rise.

I encountered the other narrative on a brief stopover in London. Courtesy an Indian journalist working at the BBC, I was asked to do a 25-minute interview on the Modi Government for Hardtalk. Now, Hardtalk is a pretty prestigious BBC programme, and I spent an entire day going over and digesting facts and figures. I expected the interrogation to centre on demonetisation, GST, economic reforms and perhaps even a question or two on Padmavati.

I was horribly mistaken. From almost the word go, it was clear that the interviewer approached me as a defender of a rogue regime, a variant of the regimes of Putin and Erdogan. The entire programme seemed to centre on aggressive questions on beef, lynchings and the dissidence within the BJP as personified by Yashwant Sinha and Arun Shourie. The interviewer wasn’t at all interested in demonetisation, the war on corruption and economic reforms. For him, the Modi Government was a government of the rich and Hindu hardliners.

Now, that is a perspective of the Government that is articulated by a section of the intelligentsia, ones that have access to Western media. To my mind, the problem didn’t lie in raising these issues but that only these issues were raised. No wonder there is a debate within the UK of the BBC being too biased.

THERE IS AN extremely silly debate that I observed on Twitter about Hindus celebrating Christmas. The suggestion was that it was a Christian festival best left to Christians to celebrate.

I have a special association with Christmas, not least because I spent my childhood in Calcutta, a city where it was observed as burra din—a relic from the days when it was the capital of the British Raj. To me, however, Christmas has only tangentially been a religious festival. It has always been an occasion for gluttony. In observing Christmas as a food festival, I am perhaps little different from my British friends who are nominally Christian. For them, food is combined with family. It is like our Diwali.

Of course, when I say ‘food’, I do mean Western food. In recent years, many Indians have started roasting turkey. I must confess that I have never acquired any taste for that bird and I find turkey to be too dry—although I am told that there are specially reared birds available in the West that are both expensive and succulent.

My preference is for goose or lamb. Since we cannot buy fatty goose in India and our ovens are not big enough to roast it, lamb is the inevitable fall back option. It is a treat if you can persuade some kindly soul to bring back a leg of lamb from somewhere overseas, especially Australia or New Zealand. To add to that, I always try to get a few boxes of mince pies. I love eating those with some rich cream. The Christmas pudding too has to be horribly rich, laced with lots of dried fruit and had with rich brandy butter.

This very Western Christmas meal is not to everyone’s liking. I remember one year when Derek O’Brien, now my colleague in Parliament, invited me to his father’s open house in Kolkata. I went there after a traditional Christmas lunch— ham and turkey—at the Tollygunge Club. I expected this famous Anglo- Indian family of the city to have laid out a very similar spread. I was quite surprised when I found Derek’s father, Neil O’Brien, tuck into a plate of chicken biryani.

That’s when I concluded that a Christmas lunch needn’t be Western food at all. What matters is sharing your special meal with friends and family.

FOR THE PAST four years, the India Foundation—an initiative of Ram Madhav and Shaurya Doval— has been organising a retreat in Goa to discuss ideas. The initiative stemmed from a realisation that the intellectual world in India was dominated by Left-liberal ideas. There was a compelling need to create an alternative narrative. Equally important, there was a need to bring all those individuals who can loosely be described as either ‘nationalist’ or ‘right wing’ together, not least to demonstrate that they were not alone but belonged to a larger community. This was important because universities and the media were inclined to isolate anyone who didn’t fit into the Left- liberal framework and make them feel unwanted.

After four successful conferences in Goa, I can safely say that the initiative has taken off. Maybe the sessions don’t produce frightfully original ideas that would pass rigorous academic muster, but there are enough ideas and fresh perspectives that would enrich the inquisitive mind. Today, the bhakts, as they are contemptuously referred to in the social media, no longer have to feel defensive about their positions. They have created a vibrant network of like- minded individuals who are spread all over India and whose voice, increasingly, counts for something in the real world.

My only real lament is that the creation of alternative intellectual ecosystems has not, as yet, touched Bengal. My trips to Kolkata have persuaded me that despite the electoral truncation of the Left, the 57 varieties of Marxist and neo-Marxist thought are alive, thriving and monopolising the intellectual world of West Bengal. It is time to reclaim the lost inheritance of Bankim, Vivekananda, Syama Prasad and historians such as Jadunath Sarkar and Ramesh Chandra Mazumdar.