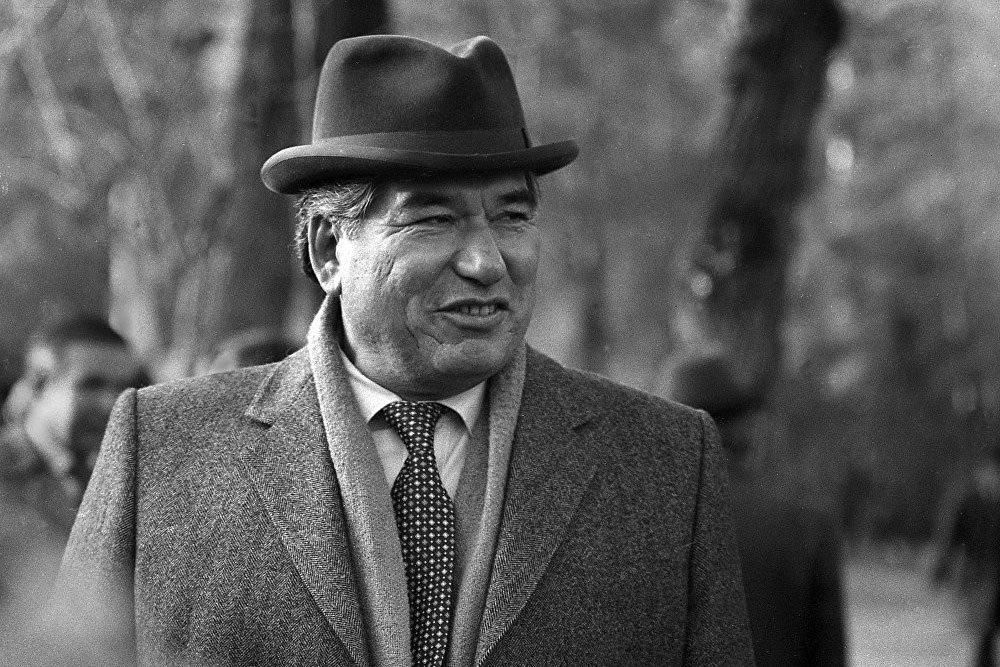 
For centuries, goods and people travelled across the fabled Silk Road from India to Central Asia and beyond through the mysterious land of the Kyrgyz, blessed with immense natural beauty, the Tian Shan Mountains and an ancient culture with strong links to India. To decipher the Kyrgyz soul, one must read and understand its national epic- Manas.  It is to Kyrgyzstan, what the Ramayana and Mahabharata are to India. Passed down orally for at least a millennia, the Kyrgyz epic has 553,000 lines and is considered the high point of Central Asian oral culture. Understanding and love for this epic was one of the guiding principles for the success of Kyrgyz writer Chingiz Aitmatov (1928-2008), best known for his books Jamila, Farewell, Gulsary!, The White Ship and The Day Lasts More Than a Hundred Years.

“Chingiz Aitmatov has admitted that he has an inner attraction to India because India is mentioned in the Kyrgyz epos Manas,” Dzhirgal Kutmanalieva, an academic based in Bishkek said at a 2010 conference hosted by the International Council of Roerich Organisations. “The entire history of Central Asia from ancient times is linked with India in the mutual interaction of cultures.” Although the epic is mainly centred geographically around the modern-day Kyrgyz Republic and Xinjiang, there are several references to India and the Himalayas.

Early success as a writer

Aitmatov, whose father was murdered during the Stalinist purges of the 1930s, grew up bilingual and wrote with equal comfort in Russian and Kyrgyz. Educated in a Soviet school, he took up different jobs as a teenager during the Second World War in Kyrgyzstan before enrolling at the Kyrgyz Agricultural Institute. Writing was his calling, and he switched to literary studies at Moscow’s Maxim Gorky Literary Institute.

While working full time as a journalist for the Pravda in the 1950s, Aitmatov’s first literary works in Russian and Kyrgyz were published. His most famous novella Jamila was published in 1958. The plot revolves around a woman from a traditional family of horse breeders who enters into an extra-marital love affair with a man crippled in the fighting during the Second World War, while her husband is away on the front. The book provided readers with one of the first glimpses of life in remote Central Asia. “Through his story Jamila, readers the world over came to learn of the Kyrgyz people’s existence, their traditions, and their distinctive way of life,” Rahima Abduvalieva writes in Chingiz Aitmatov: The Glorious Path of an Eurasian Writer. “International recognition of Chingiz Aitmatov went hand in hand with recognition of Kyrgyz culture.”

French surrealist poet Louis Aragon went as far as calling the short novel “the world’s most beautiful love story.” Jamila was adapted into a feature film a decade later, and was screened at several international film festivals.
Jamila found its way to Indian audiences in the early 1960s, at a time when the Soviet Union made it a priority to promote literature from the country in India. By the time, Aitmatov came as part of a delegation of Soviet journalists in 1966 he was already seen as a celebrity in India and was interviewed by The Indian Express, where he spoke about his main concerns in life- the dignity of life and preservation of life on the planet.

Until the collapse of the Soviet Union, Aitmatov would continue to make brief visits to India. Professors and former students of Jawaharlal Nehru University (JNU) talk fondly of the writer’s visit to the campus in 1986.

“His works such as Jamila and The White Ship were known to the students,” says Varyam Singh, Professor at JNU’s Centre of Russian Studies. “Teachers and students were happy to welcome him. He spent about 2 hours at the university.”

Nasar Shakeel Roomi, who was a student when Aitmatov visited JNU, went on to do his PhD on the writer’s works. Roomi, who is writing a book on Aitmatov, is now a Professor at the Centre of Russian Studies at JNU. He managed to meet the writer in Kyrgyzstan.

“When my meeting with Aitmatov was fixed I was very nervous as I had no idea how he was as a person, because when he came to JNU the interaction with the students was very formal and I could not make out much about him,” Roomi says. “Being so famous around the world I had thought that I would meet an arrogant person and maybe he would give me just five minutes. When finally, I was escorted inside his chamber in the writers’ building the first feeling was of warmth and poise… Graceful and elegant! He spoke to me for over an hour and refused to answer any calls during the meeting.”

Roomi says Aitmatov made him feel at ease, speaking in length about his works and innumerable travels around the world. During their meeting, the Kyrgyz writer told Roomi that he found more solace and inspiration in India than any other country, but regretted the fact that he could not visit the country as many times as he desired.

“Indian mythology, aesthetics, and above all Indian folklore inspired him a lot, and he was very forthright about it,” Roomi adds. “He had read Ramayana and Mahabharata in Russian, as well as Panchatantra and Jakata Tales. He found many parallels between his own country and India. He especially mentioned that our country is warm in both temperatures and heart. The warmth of people impressed him.”


In the 1970s at the peak of the Indo-Soviet bonhomie, many favourable articles about India were published in the Russian press. Some Soviet writers also attempted to write about the country for literary magazines, but Aitmatov, felt India, as a subject, needed deep study over a long period of time. In an interview with Soviet writer Elga Zlotnik, Aitmatov remarked, “A writer, knowing today’s good relations with India, creates a story about this country in ten days. I think such a book can never become an object of art or great literature.”

While Aitmatov never wrote a book about India, his 1980 novel, The Day Lasts More Than a Hundred Years, which many consider his finest work, makes several mentions of India.  The book, with its central plot revolving around Burannyi Yedigei, a Kazakh worker whose task is to bury an old friend according to the traditional Muslim rituals of the Kazakhs, actually advocated a revival of pre-Soviet and pre-Russian traditions in Central Asia.  Despite the controversial theme and the book being written just around the time the Soviet Union invaded Afghanistan, it passed through the censors and was first published in the Novy Mir literary magazine.

India also gets a mention in The Cranes Fly Early, a semi-autobiographical novella about a group of boys taken from school during World War II to help with the war effort. In the novella, the protagonist Sultanmurat hears a story from his schoolteacher about the warm waters off the coast of India and the island of Sri Lanka.  The book was widely available in India in the early 1980s, thanks to Raduga Publishers.

After his books were first made available in India in the 1960s in English, they were translated into more than 20 Indian languages. Such was the popularity of his works in India that even books that were not very popular in the Soviet Union were translated into Indian languages. Mother Earth, a tragic tale of a Kyrgyz woman who lost her husband and three sons in the Second World War was translated from the original Russian to Malayalam with the title Vayalamma by Omana Gopalakrishnan. Omana and her husband Moscow Gopalakrishnan (K Gopalakrishnan Nayar) lived in Moscow for several decades and were responsible for the translation of several books of Aitmatov into Malayalam.

It wasn’t just readers of Soviet books and students of Russian that held Aitmatov in high regard. The Kyrgyz writer was even welcomed by Indira Gandhi. In 1985, he was awarded the Jawaharlal Nehru Award.  It was in the same year that Rajiv Gandhi visited Bishkek and Issyk Kul Lake in Soviet Kyrgyzstan.

Aitmatov was totally overwhelmed with the response his books received in India that he remarked famously: “For me, India – is the one-of-a-kind unique reservoir of spiritual experience that has accumulated over the millennia. It is the cradle of world civilization, the foremother of Indo-European languages. This alone means a lot in the history of world culture. This greatness of philosophical and artistic thought of India gives me the feeling that I cannot call otherwise than reverence.”

Excerpt from ‘The Day Lasts More Than a Hundred Years’

Burannyi Yedigei remembered the end of that summer and the start of the autumn of 1952 with a special feeling of happiness past. It was almost magical how his prophesy about the weather came true. After that dreadful heat, in which even the Sarozek lizards ran on to the very thresholds of the houses to escape the sun, the weather in the middle of August changed very markedly.

The unbearable heat went away suddenly and gradually the cooler weather came along; at any rate one could sleep peacefully at night. Such a boon did not come every year in the Sarozek, but it usually did. The winters were constant; they were always severe. But in the summers, there sometimes was a blessed break. This happened, said Yelizarov, when strong shifts appear in the upper layers of the airflow, and the direction changes. Yelizarov loved to talk about such things. He said that up there in the sky flowed great invisible rivers with banks and floods. These rivers, being in continuous movement, washed around the earth’s sphere; thus wrapped around with winds, the earth continued on its orbit- and time passed.

It was fascinating listening to Yelizarov. It was hard to find such people; he was a man of rare character. Burannyi Yedigei respected him and he respected Yedigei. So there it was; that heavenly river which was bringing cooling air down to the Sazorek had somehow come down from its place on high and, as it came down, had met the Himalayas. These Himalayas were God only knew how far away, but in the scale of global distance they were quite close.

The river of air struck the Himalayas and reflected back from them, not going on into India and Pakistan; there the heat remained as it was and the air flowed back over the Sazorek, because the Sazorek, like the sea, is an open space without any obstacles. So this river brought in the cool air from the Himalayas…