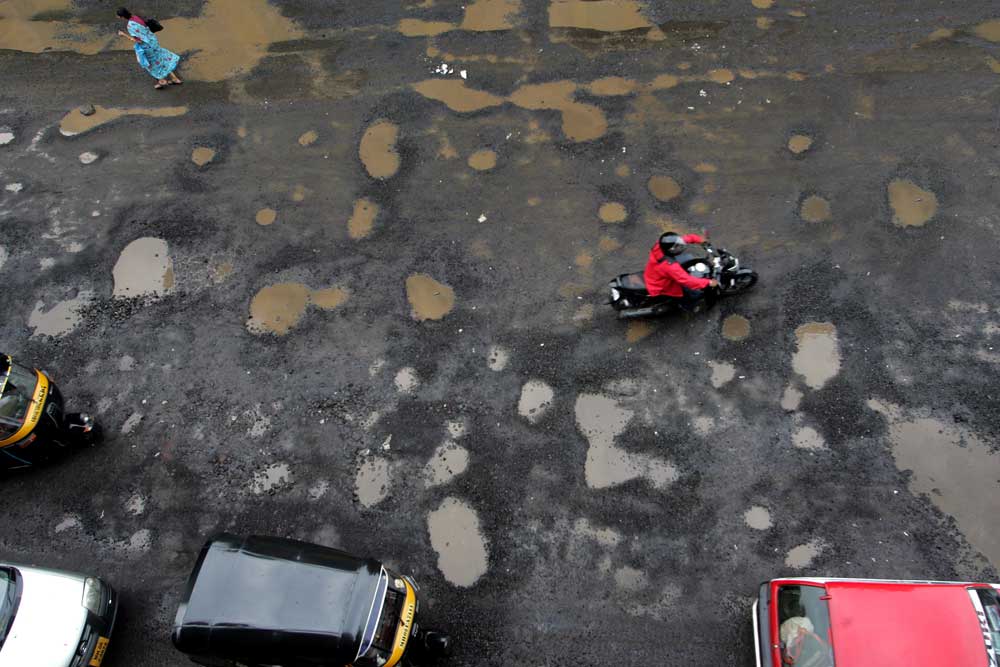 THIS MONSOON, the entire road network of Mumbai collapsed. Footpaths, tar, gravel, concrete, emanations of black holes hidden under muddy brown slush—all melded together to create a Jackson Pollock painting where once there were highways. This didn’t happen last year. This didn’t happen the year before last. This was because of the drought. This year it rained as it should. An economic capital is a city that needs to rely on the monsoon failing to keep its traffic moving. As it turns out, maybe not even that.

Oxford Economics, a global advisory firm, says that Mumbai has just been edged out as India’s economic capital. In its list of 50 best metropolitan economic entities—Mumbai is 31st and Delhi 30th. Delhi will extend its lead by 2030, moving to 11th spot while Mumbai will be 14th. Maharashtra Chief Minister Devendra Fadnavis does not agree. He has his own GDP numbers showing Mumbai on top, and, Chhatrapati Shivaji willing, it will remain that way. ‘Fadnavis said his government was framing policies to unlock land so that it becomes affordable. Also, infrastructure projects such as the Mumbai trans-harbour link would open up the hinterland,’ said a Times of India report.

To be an economic capital of India, a city must make itself as unbearable as possible and still manage to attract needy people. To get the crown taken away, the city must become so unbearable that even the desperate stay away. Mumbai is far from there but certainly moving in that direction. Its many corruptions are rooted in land; the first sin from which everything else emerged. In the slums, the minor gangster, the minor politician, the minor policeman and the minor ward officer captures government land and then levies a toll on its access. And from then on there is a progressive organised banditry with encounter cops becoming middlemen, solving property disputes for big builders and the swankiest of high-rises having the imprimaturs of former chief ministers. Every politician in Mumbai is an entrepreneur, a silent partner in numerous businesses.

A great enterprise of corruption is set in motion every few decades when a swathe of the city is opened to development. The suburbs keep extending until they soon touch Gujarat. There are also true economic gains. Indiscriminate and even illegal construction is a great money multiplier and job creator. Fadnavis’ solution of yet again using land as a sop for industry will inevitably give the same results. He might mean well. For the first time, you notice that work on metros and monorails is happening all together instead of single deserted lines that go nowhere. But these are things to be done three decades ago. The city now plays catch up to even a half-decent way of living and its fails. It is good to not be an economic capital. It might be even better to pause and de- grow, to reverse, from metropolis to city to town with roads that are roads.