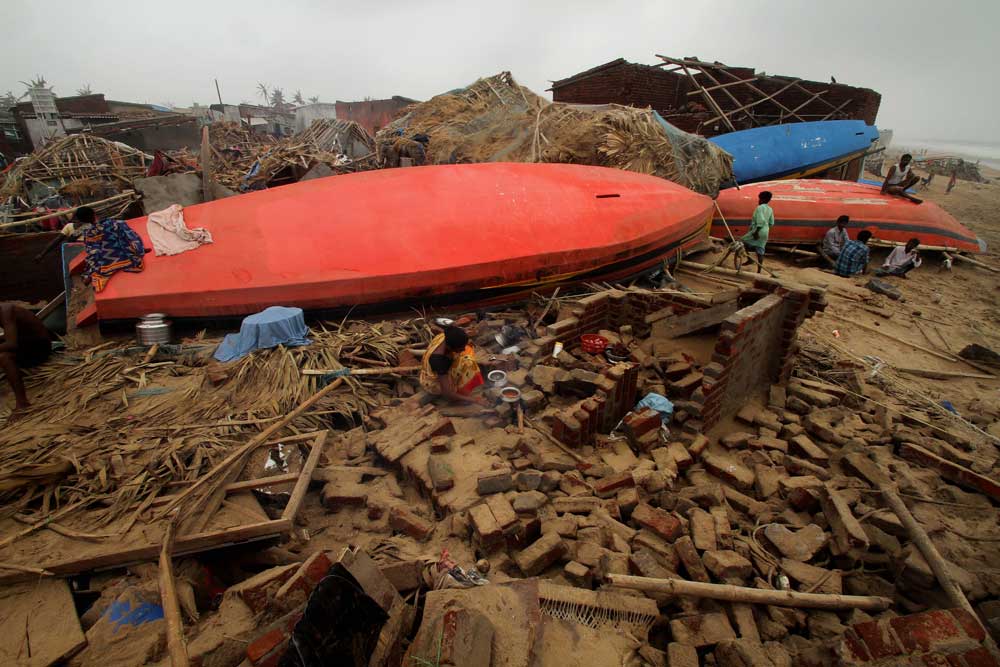 JUST UNDER A week after the supercyclone hit Orissa in October end, 1999, an Oxfam programme officer made a report on the damage, which noted, ‘Though there are no official estimates of the human casualties, independent observers and local level workers figure it to be more than 20,000. The port city of Paradip in the worst affected area has a casualty count ranging between 8,000-10,000 where the deceased are mostly daily wage labourers, fishermen and women… Instances of food being ransacked and several trucks attacked have been reported in the last few days, resulting in relief measures not reaching the most affected… In a nutshell, the damage can be said to be a total loss of normal livelihood for the next 6 months.As a consequence the village economy has collapsed hitting mostly the landless labourers. About 10 million people are affected by loss of livelihood.’

Compare that to Cyclone Fani which struck the state last week. The Orissa State Disaster Management Authority’s situation report of May 8th says that five lakh houses were damaged, 1.5 million people were affected, telecom towers, transmission lines disrupted, millions of livestock killed. But the key statistic is the number of human lives lost: just 41. As against the estimates ranging from 10,000 to 30,000 for the 1999 supercyclone, this is less than 0.5 per cent.

How did this become possible? Orissa has always been a target of cyclones but the battering by the supercyclone was unlike any seen in modern times. India is right now at a point in time where it has resources to confront large-scale natural calamities; even if what fails it is the inefficiency of the state. The system is a snail-paced creature but it can move when prodded. The supercyclone was that trigger in Orissa. It is a poor state but in meeting such a calamity it did far better than wealthier Kerala, where a spell of extremely heavy rainfall last year left the government floundering when it had to open the dams leading to extensive flooding of towns. More than 200 died then.

Keeping loss of lives to a bare minimum is the first step to meeting such events. In an earlier age, the administration just threw its hands up when thousands of lives were lost. But now that has become unacceptable in governance. To move millions is a logistical undertaking of wartime nations. Orissa has done this repeatedly with success since 1999 and there might be lessons for other states in it.

The second part—preventing loss of properties, restoring infrastructure quickly and ensuring the financial security to those whose livelihood were upended—might not be such a resounding success. Where Kerala’s social development kicked in was in the aftermath. You saw that in worldwide mobilisation to gather funds, relief supplies being quickly disbursed and rehabilitation beginning almost as soon as the waters abated. Orissa will have just as tall an order and that is where it will be tested now.