And escaping into the cloudbursts of Indian imagination 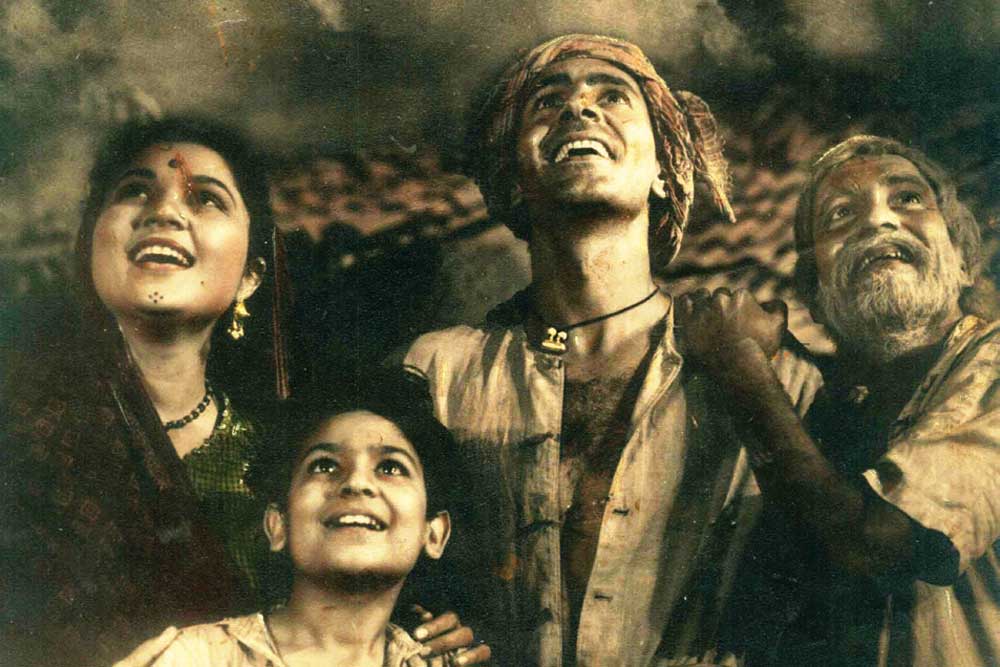 DESPITE THE POPULAR belief that it’s always raining in the UK, an official drought has been declared in England after an exceptionally hot summer and very little rainfall. Europe has been even more severely afflicted with the rivers drying up so much that the “Hunger Stones” has re-emerged, warning that the water levels are so low that drought and famine will follow.

Droughts have caused many natural disasters in India and seem to be beyond the control of humans, however much they have tried to regulate and control water. India’s landscape has been altered by the projects of the so-called “hydraulic civilisations”, including that of the Mauryas, while irrigation tanks, stepwells, and a whole architecture of water are seen all over the country.

The gods are often seen to control the rains. Over a quarter of the hymns of the Rig Veda are addressed to Indra, the warrior god who is also the god of rain and thunder. Many of these refer to his battles with Vritra, a serpent who causes droughts by obstructing the waters, swallowing them, and hiding them. Indra kills him to release the waters and the cows that he traps in a cave. Even today, a rainbow is called Indra’s bow, Indradhanush.

References to Indra as the reliever of drought are found also in the Mahabharata. Girish Karnad’s play The Fire and the Rain (original Kannada, Agni Mattu Malé) adapts the story of Yavakri from the Vana Parva (Forest Section). The setting for this complex tale is a seven-year yajna or fire sacrifice to propitiate Indra to relieve a decade of drought. Indra appears at the end of the play to give the boon of rain to the village.

The river Ganga is a great source of water for much of north India. She is associated with Vishnu, originating in Vishnupada (the foot or place of Vishnu). In his vaman (dwarf) avatar, he pierced the heavens so she flowed from Indra’s heaven, via Dhruva (the Pole Star), to the Milky Way (Akashganga) and to Brahma’s heaven and Mount Meru, then as Alakananda into Bharata.

The Shaivite story of the descent of the Ganga (Gangavatarana) is told in many versions in the Sanskrit epics and Puranas. This has been celebrated in culture, including a film by DG Phalke (1937), and the wonderful sculpture at Mahabalipuram.

After King Sagara’s sons went looking for his horse which was stolen during the ashwamedha (horse sacrifice), they found it at the ashram of the sage Kapila. He burnt them to ashes for disturbing his meditation. The king’s grandson, Anshuman, obtained a boon from Kapila that the sons could be brought back to life by water from the Ganga. Ganga was in heaven but Anshuman’s grandson, King Bhagiratha, performed austerities (tapas) until Ganga granted his wish to descend to earth. However, the floods were such a risk that Lord Shiva agreed to break her fall by catching it first in his hair.

The Arthashastra, in a section dealing with calamities, reckoning drought much worse than a flood, advises rites from the Atharva Veda with prayers to Indra, Ganga, the mountains, and the God of the Sea.

Modern India has continued dam-building to prevent drought and floods and also to supply hydroelectric power. The most famous celebration of dams is in Mother India (1957). Radha (Nargis), the embodiment of “Mother India”, is seen in the opening sequences as an old lady, smearing damp mud on herself as we hear a bhajan to “Dharti Maa”. She is identified with Mother Earth as we see shots of new technology—electricity, diggers, etc. as she is honoured by being invited to inaugurate a new dam. Her village was affected by drought, which the dam is built to prevent as part of a drive for new modernity.

Drought drove the plot in Bimal Roy’s Do Bigha Zamin (1953), as the farmer Shambu gets into debt over his two acres of land due to drought and then has to migrate to the city to try to make money as a rickshaw-puller. The acclaimed Marathi film, Gabhricha Paus (2009), tells the story of a village facing drought in the Vidarbha region of Maharashtra, the area where many of the farmers died by suicide. Peepli [Live], 2010, is a satire on the media coverage of farmer suicides rather than a study of drought.)


Drought drove the plot in Bimal Roy’s Do Bigha Zamin, as the farmer Shambu gets into debt over his two acres of land due to drought and then has to migrate to the city to try to make money as a rickshaw-puller

In Shyam Benegal’s comedy, Well Done Abba (2009), Armaan (Boman Irani), a driver working in Mumbai, takes leave to go to Hyderabad to arrange his daughter’s wedding. The film chronicles his struggles with the bureaucracy to get a grant to construct a well to relieve the drought.

Another film that took the theme of the drought was Jal (2013), set in the Rann of Kutch, which is shot beautifully. A water diviner tries to find water for his drought-stricken village, squabbling with a neighbouring village, while a foreign birdwatcher searches for water to save flamingo chicks.

While the rain songs of Hindi cinema are well known, there are fewer songs about drought. Sometimes, the rain song can be a false hope. In Lagaan (2001), the villagers of Champaner have been affected by drought for many years and seek an exemption from tax (lagaan). A British officer agrees to do this on the condition that the villagers win a cricket match but that if they lose, they will have to pay double the tax. The villagers are earlier seen to invoke the rains, singing the stirring ‘Ghanan ghanan ghan’ (The clouds are thundering), a rain song, but the clouds pass without rain. The villagers later sing two stirring songs, ‘Mitwa’ and ‘Chale chalo’ to show solidarity and self-belief as they take on the challenge, then the ‘O paalanhaare’, as they pray for divine help.

Although it’s rare to like a novel and its adaptation to screen, one of my all-time favourite Hindi films is Guide (1965), based on RK Narayan’s Sahitya Akademi-winning novel, The Guide (1958). Although they share a story, the two have little in common, as the film takes the story to the tourist attractions of Udaipur, adding stars, songs, and glamour as well as locating it in a moral universe that is much clearer than in the book.

After many misadventures, Raju, a former tourist guide, is sent to prison for fraud. As he wanders on his release, he is mistaken for a spiritual guide. He takes up residence in a temple and gives his homespun wisdom to villagers. When famine strikes the village, the villagers expect Raju to fast in order to bring about rain. Media and crowds gather to witness the fast and a miracle. On the eleventh day of what was to be a 12-day fast to bring rain to end the drought, Raju says, “It’s raining in the hills. I can feel it coming up under my feet, up my legs…” and collapses.

In the film, Raju seems to achieve spiritual enlightenment and dies as the rain starts to fall. There is no ambiguity. However, in the novel, it is unclear whether he lives or not, and whether it rains. Can one be absolved? Can a swindler and adulterer pretend to be a sadhu, then actually become one by performing a fast and gain powers by tapas that can unleash the rain? For some readers, he remains a conman and a fraud whereas, for others, he becomes a sadhu who sacrifices his life for the villagers. It is up to the reader to decide.

Although I prefer the ambiguity of the ending in the book, there is one advantage the film has. This is where SD Burman sings the song ‘Allah megh de pani de’. This version is a rearrangement of the longer Bengali folk song, which was recorded by Abbasuddin Ahmed, a folk singer from the Cooch Behar region, in the 1940s. SD Burman is said to have met with Abbasuddin and, indeed, modelled his singing style on his. The song was so popular that perhaps that is why SD Burman keeps the reference to Allah, which might be surprising in the context of the penance of a sadhu, though he also implores Ram and Shyam. The Bengali and the Hindi of the title are identical, given the use of “pani” rather than “jol” by Bengali Muslims. ‘Allah megh de’ has been recorded by many artists and appeared in other films, perhaps the most famous being the Hindi version in ‘Palkon ki chhaon mein’ (1977), sung by Kishore Kumar and Asha Bhosle.

As I write today, at the beginning of November, we have had many days of rain but it doesn’t seem to have ended the drought. At least, our gardens are getting soaked now so we can endure it in the hope of a colourful spring.