From Agra to Moscow: The Baburnama’s long journey to Russia

While Russia’s State Museum of Oriental Art displays its impressive collection of Baburnama folios from the 1590s, Uzbekistan is happy to claim the legacy of the founder of the Mughal Empire 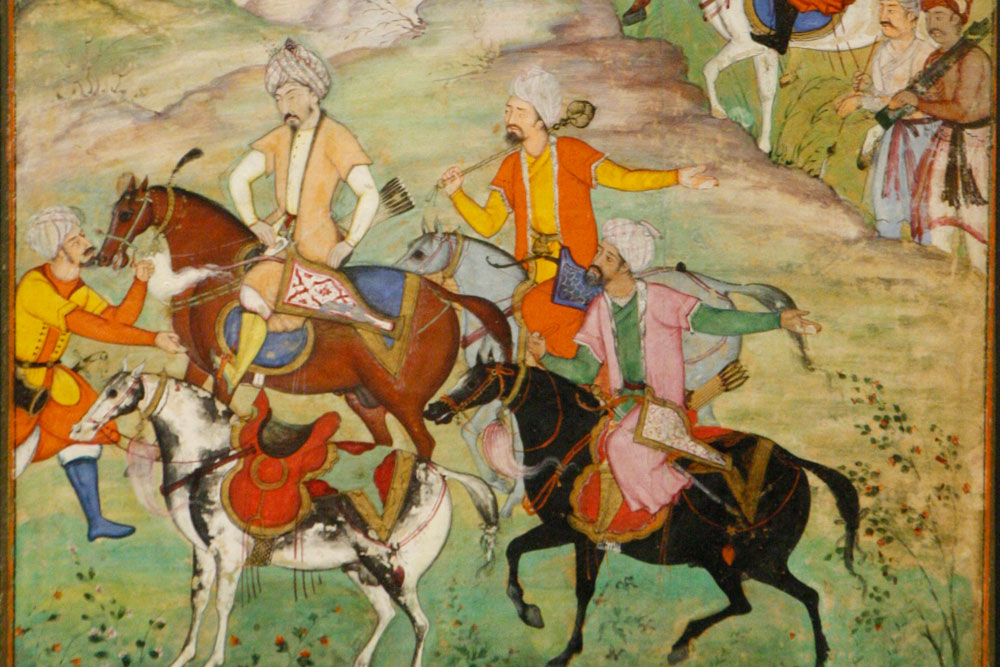 Babur changing horses during his flight from Aksi


In October 2020, a small and physically distanced group comprising academics, students, historians and Indophiles converged at the Primorsky State Art Gallery in Vladivostok for the unveiling of miniatures primarily depicting 16th century Afghanistan and India. The well-preserved 57 folios of the Baburnama had travelled across the Eurasian landmass of the country from Moscow to be on display for four months in the Russian Far Eastern city. The folios, containing 69 miniatures that illustrate the autobiography of Zahir-ud-Din Muhammad Babur, are a part of a collection of Indian art of the State Museum of Oriental Art in Moscow.

The Moscow Baburnama received attention in the Russian press last February when the museum in partnership with the Uzbekistan Embassy decided to keep a special exhibition dedicated to the folios. The unveiling of the exhibition was followed by a conference on the legacy of Babur that was attended by academics and historians from Russia, Uzbekistan, Kyrgyzstan, Turkey, Afghanistan, and India. It would have been next to impossible for any Indian delegate to not feel a degree of embarrassment over the Babri Masjid dispute.

Life in the early 16th century

Originally written in Chagathai, a Turkic language that was the shared literary language of Central Asia, the Baburnama is a collection of observations and comments that form a memoir of Babur’s life. Although the book is now known as the Baburnama, historians say the Mughal most likely wanted to name his work Wakai. It was later called Waqiat-i-Baburi, before it was translated into Persian.

Among the topics covered in the book are the plants and animals of India, astronomy, geography, war and statecraft. The book also gives a reader a glimpse into the person that the founder of the Mughal Dynasty was, as it contains Babur’s personal reflections on human nature.

“A talented commander and ruler, Babur was a widely educated man of his time,” the State Museum of Oriental Art said in the exhibition brochure. “In this book of memoirs, he collected historical and biographical notes, ethnographic and geographical information about the lands of Central Asia, Afghanistan and India, his instructions and confessions, and documents and letters.”


It was Babur’s grandson Akbar who decided to have the book translated into Persian and illustrated. There are known to be at least four illustrated copies that were made during Akbar’s lifetime. Unfortunately the illustrations in the first copy were separated and sold, before finding their way to different museums. The National Museum in Delhi has an almost complete copy, while the folios that are in Russia have very little text, and date back to the 1590s. A smaller part of the Moscow copy is at the Walters Art Museum in Baltimore, USA.

For the miniatures illustrating Babur’s words, craftsmen from Lahore and Agra used natural, earthen pigments utilizing organic materials from plants and animals. Silver and gold were also liberally used for the paintings.

The names of the artists who were responsible for the miniatures are unknown. The project involved quite a degree of teamwork with one set of artists focusing on the landscapes, while others were in charge of the patterns, and a group responsible for depicting people.

Among the better-known miniatures of the State Museum of Oriental Art collection is ‘Babur’s meeting with his sister in Kunduz.’ The painting depicts Babur meeting Khanzada Begum after the Battle of Merv.

“… When Shah Ismail defeated the Uzbeks near Merv, Khanzada Begum was in Merv,” Babur wrote. “For my sake, she was treated well, and they sent her to me as they should have. Arriving in Kunduz, she joined many others. Our separation lasted ten years. Together with Muhammad Kokoltash we came to her.  Begum and those close to me did not recognize me, although I said my name. But after a while they recognized me.”

A few illustrations in the collection are dedicated to Babur’s hunts in the Kattawaza Valley. Babur enjoyed hunting kulan (Trans-Caspian wild ass). “… During the hunt, I chased the kulan: having jumped close, I fired an arrow, followed by another one, but these two wounds did not knock the kulan off its feet, after being wounded it ran slower than before,” Babur wrote.  “Having spurred my horse, I galloped close to the kulan and hit him so hard on the neck behind the ears that I cut his larynx. The kulan jumped up and rolled over so that he barely caught my stirrups with his hind legs. My saber cut very well. It was a surprisingly fat kulan!..”

Another famous set of miniatures depicts Babur changing horses during his flight from Aksi. “… In the end, all the enemies fell behind one by one. The horse I rode was somewhat weak, Kuli Khan dismounted and gave me his horse; I jumped on it right from my horse, and Kuli Khan got on my horse,” Babur wrote.

Europeans first began to express interest in the Baburnama in the 18th century, after a partial Dutch translation was out in 1705 that has been credited to statesman and scholar Nicholaes Witsen. The book was seen as an emperor’s manual. The first Russian-language translation of Babur’s autobiography was published in 1857 by Nikolai Ilminksy, a professor of Turkic languages in Kazan. Ilminsky had obtained an 18th century copy of a copy from Bukhara.

There is an element of mystery behind how the 57 folios eventually ended up in Moscow. One theory is that they were sold to collectors in Persia and found their way to Russia through Astrakhan and further north via the Volga River.

According to the State Museum of Oriental Art, Alexey Morozov, the heir of a wealthy merchant family came across the folios at a fair held by Persian traders in the city of Nizhny-Novgorod. Morozov, who was a cultural aficionado and collector of art, bought the folios in 1906. It remained in his collection until he passed it on to Pyotr Shchukin, one of Russia’s greatest art and ancient artifact collectors.

The Soviet government seized the folios after the 1917 revolution, and the Baburnama eventually was placed in its current home in Moscow.

The initiative to exhibit the Baburnama in Vladivostok and other major Russian cities came from Uzbekistan, a country that is proud to claim the Mughal’s legacy.

Babur is considered a national hero in the former Soviet republic, in pretty much the same way Genghis Khan is admired in Mongolia. This writer has had many conversations with Uzbek taxi drivers in Moscow who speak with pride about Babur being a son of the Ferghana Valley.

In the first decade of the 21st century, the government of Uzbekistan had even suggested that India and Uzbekistan offer joint travel packages for tourists to visit both countries as part of a Mughal heritage tour. In a world without a pandemic, what could be better than visiting Mughal monuments in Agra and Delhi and then combining it with a visit to Samarkhand and Bukhara?  India has changed a lot since the 2000s. As far as New Delhi is concerned, Babur was a villain and a new temple in Ayodhya will erase an uncomfortable period of Indian history. A strategic outreach, friendlier ties and greater integration with Central Asia be damned!