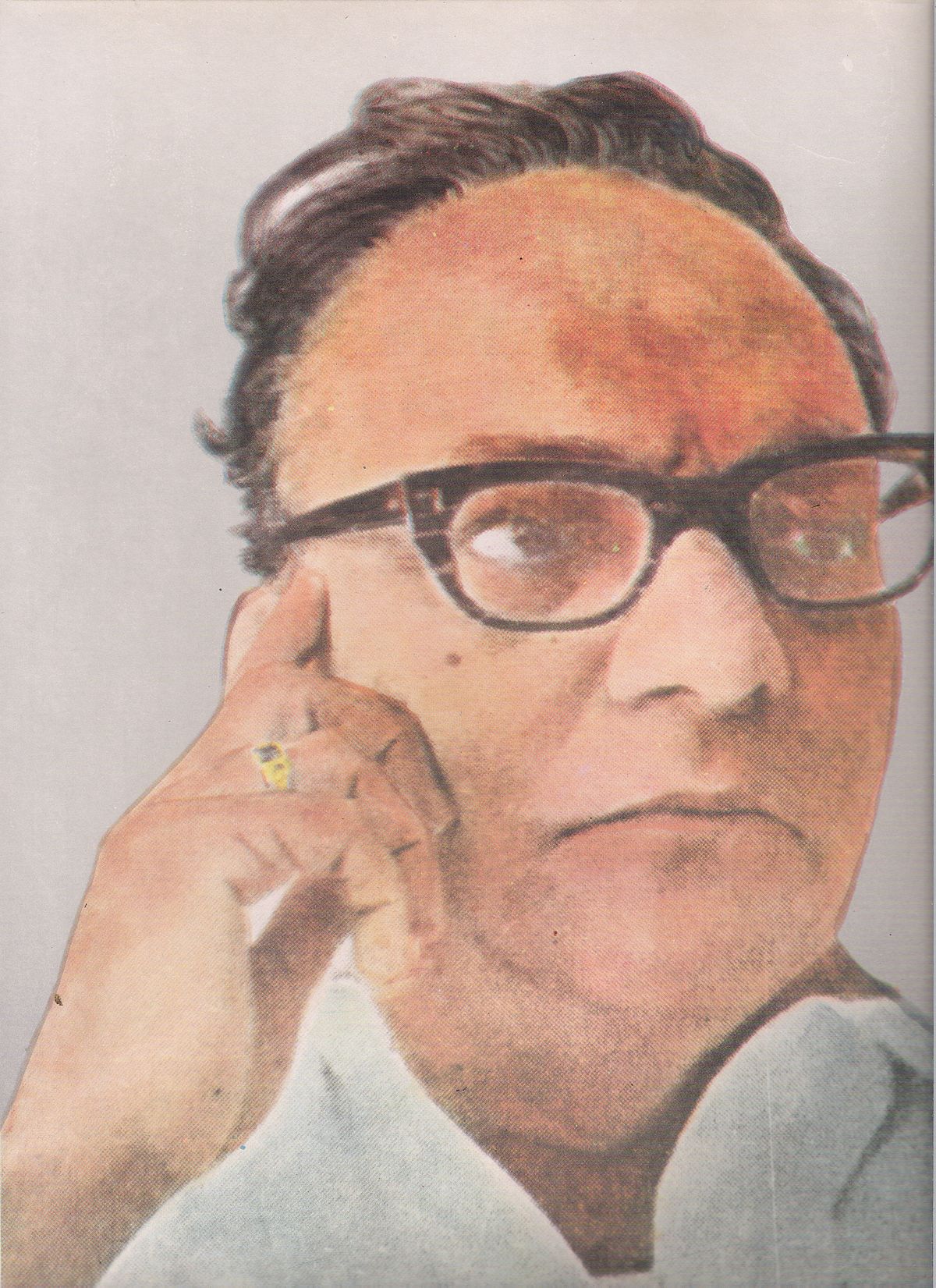 
The August 1958 issue of Don magazine, a prestigious literary publication in the port city of Rostov-on-Don, published a story that questioned capitalist society, which it held responsible for the Second World War. Such narratives were common in Khrushchev-era publications, but what made this particular story stand out and attract a good amount of attention from readers was that it was a direct translation from Telugu, a language that very few Soviet citizens were aware of.

The story, Charama Rathri, by ‘Mahakavi’ Srirangam Srinivasa Rao or Sri Sri was translated to Russian by Alexander Golemba, an epidemiologist who became a full time writer, poet and translator. Golemba was fluent in Yiddish, Spanish, German, Lithuanian and several other languages. Almost no information exists in the public domain about his efforts to learn Telugu, but this one translation of Sri Sri’s story Charama Rathri made the Telugu poet and writer known in the literary circles of the Soviet Union in the late 1950s.

Moscow had taken an interest in Sri Sri’s work a few years earlier. When the poet was in Stockholm for a peace conference in 1954, the Soviet delegation invited him to visit the USSR.  Crossing the Baltic Sea, Sri Sri visited Leningrad in a delegation that included writer Ali Sardar Jafri.  The poet shared a room with literary critic and politician Joseph Mundasseri. “That year I suffered all the rigours of the Russian winter,” Sri Sri wrote in his memoirs. “Next time (if at all) I visit the USSR, I shall go there only in summer, I thought.”

Raised in Orthodox middle class surroundings in Visakhapatnam, Sri Sri developed a reputation as a poet when he was a student at the Madras Christian College. He came of age as a writer in the early 1930s at a time when Telugu writers and poets helped bring about a golden age of literature in the language. This was the time when the spoken tongue began to be used for literature, in effect reaching out to a much wider public. Writers and poets in the Telugu-speaking regions of India were intent on fighting old and feudal structures.  Sri Sri saw socialism as a system to combat an exploitative system.

In the Soviet Union, he saw what was possible for a future independent India, and this began to show in his writings.

“In forceful language, with total formal control of both the popular tongue and Sanskritized Telugu, and with a sovereign ability to use speech sound and meter, he gave youth of the thirties the message to crush the old state and rip,” Swedish writer Jan Myrdal wrote in a tribute to Sri Sri in 1983.

Soviet diplomats in India paid a great deal of attention to Sri Sri’s works. In the 1960s, many diplomats who served in India were alumni of Moscow State University’s Institute of Asian and African Studies and were fluent in more than one Indian language.

In 1960, the premier literary and art magazine of the Soviet Union Innostranaya Literatura (International Literature) published excerpts from Sri Sri’s anthology Mahaprasthanam, one of the greatest works of Telugu literature, which earned Sri Sri the title of Mahakavi.

In 1967, when the Soviet Union was celebrating the 50th anniversary of the October Revolution, Sri Sri, who was the recipient of that year’s Soviet Land Nehru Prize, visited the country for the second time.

Although travel for both Soviet citizens and foreigners was highly restricted, the Telugu poet was given an opportunity to visit several Soviet republics, including Uzbekistan and the Baltic states. The long train journeys wore him out, but the destinations were all that he hoped they would be.

He was particularly enamoured by the Baltic cities of Tallinn and Riga, which he said reminded him of his birthplace Visakhapatnam. “During the few days I was in Tallinn and Riga, I relived my days of childhood and early youth,” he wrote. He was told by the Writers’ Club in one of the Baltic cities that new novels are sold out in a few days and books of poetry in a few hours.  He wrote, “Only in a socialist state do all the finest instincts of human beings blossom forth and find the fullest maturity.”

The Soviet Union also arranged for him to visit Leo Tolstoy’s estate in Yasnaya Polyana. “This is a massive monument to the memory of Tolstoy,” Sri Sri wrote. “Whole passages of the Resurrection welled up in my memory as we paced leisurely along the estate of Tolstoy.”

The carefully curated trip only helped Sri Sri love Soviet Russia even more, judging by the way he described Moscow of the late 1960s: “Moscow itself is a massive monument to the memory of Lenin, and also to the glorious poetry of Mayakovsky and of Pushkin and of Lermontov and of Nekrassov. Moscow itself is a mighty poem.”

Sceptical Muscovites may have taken issue with such a flattering description of their city, but they’d understand the poet’s admiration for the Moscow metro, where the poet said he experienced “an authentic artistic frisson.” Of course, Sri Sri managed to make a comparison like no other. “Perhaps the masterpieces of South Indian temple architecture bear a remote resemblance to the metro. But what a great difference in the degree of intensity! Yes the Moscow Metro stands as the greatest artistic creation by man.” The metro network in the Russian capital continues to grow, but the practice of building works of art ended thanks to Nikita Khrushchev, who felt Joseph Stalin went over the top with the grand old metro stations.

Perhaps the greatest validation for socialism that Sri Sri saw in the USSR came from the healthy and well-dressed children he saw throughout his fortnight-long visit. Child malnutrition and a lack of access to education in his native Andhra Pradesh and the rest of India would have definitely bothered the poet.

“You go to any city or town or village in the USSR, health is there in abundance, cleanliness is visible to the naked eye,” Sri Sri wrote. “You see children on one hand, and bright flowers on the other, and when you ask yourself the question, ‘who is the healthier- “child-flowers or flower-children,’ there is no answer!

He added that real wealth of the USSR was its children. “I saw with my own eyes, how the children are looked after in the way of humanistic, communistic morals. The Soviet state lavishes great care and loving solicitude on its children, the pioneers of a great new human civilisation, of which I have spoken earlier, the like of which was never known before.”

Till date, many parts of the former USSR have very good childcare and public facilities for children, and the healthcare system still functions.  While the Soviet Union did manage to house, feed and educate its citizens, the welfare system was far from perfect in the country.

As Sri Sri left the country, he expressed disappointment about not meeting Soviet writers and poets. The authorities probably did not want Sri Sri’s impressions of the country tainted by hearing more realistic takes on life from some of the better-known literary figures. “It pains me to think that I can never meet Ilya Ehrenburg because he is no longer with us,” Sri Sri wrote. “Others, especially the younger poets such as Yevgeny Yevtushenko and Andrei Voznesensky, I hope to meet sooner or later.”

While leaving the country, he said it was like a “second motherland.” By the time of Sri Sri’s death in 1983, the Soviet Union had stagnated through the Leonid Brezhnev era and the reforms brought by Mikhail Gorbachev failed to stem the tide.

The USSR stopped existing by the end of 1991. Was the great Telugu poet’s ideas of socialism and the greatness of the Soviet Union a total fantasy? No, but the country’s obsession with control, security and secrecy was its undoing. The real opportunity to bring about slow reforms passed the country by before the Gorbachev era. It would be wrong, as many western historians and analysts do, to minimise the real achievements of communism in the Soviet Union.

Sri Sri definitely understood that certain changes that were made to uplift the masses from an unequal and feudal Russian society could have been replicated in India. In his writings, he also spoke of a friendship between the people of Russia, India and China.  Almost three decades after his death, this idea only seems to have takers in the same Kremlin, which abandoned socialism a very long time ago.